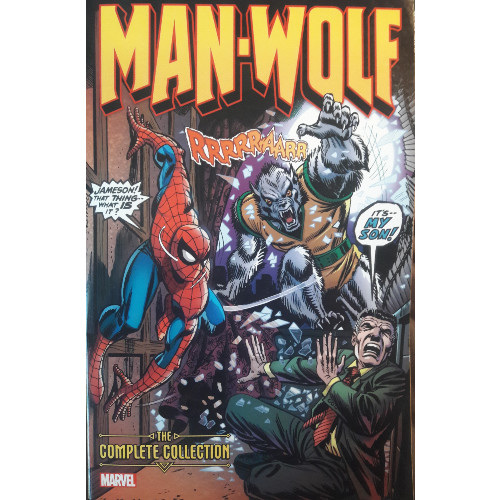 I’ve been blogging about Spider-Man comics for a little while now and recently asked myself a couple questions: if my “chronological” format for Spider-view starts off with comics from 1982, what about issues that I own, or issues that I will eventually purchase, that come before that date? Or what if I buy an issue or series from 1991 when I’ve already reached 1993 in my timeline? And what about stories I own that aren’t necessarily Spider-Man related? Do I just skip those over? Part of me felt a little incensed with that thought, especially as I may have storylines from before 1982 that I’d like to blog about. After giving it some thought, I decided to embark on a second series, published concurrently with Spider-view.

The name is, hopefully, meant to work on a very specific level: “strand” + “random.” These tales will be “random,” as I will have no particular reason to blog about them except for the fact that I chose to read these issues and, for one reason or another, they do not fit within the chronological timeline I’ve been establishing in my Spider-view series. But they are also “strands,” or tethers, to Spidey in some shape or form, by including Spidey-related characters, plotlines, creative teams etc. I’ll admit right off the bat that several of these connections will be tenuous at best--this review, for example, comes on the heels of a recent Spider-view post where I reference John Jameson, J. Jonah Jameson’s son. But it gives me at least a semi-creative reason/excuse I hope makes these installments appear less random than they actually are. Not that I need a specific reason to write about any story I read, but carrying on certain thematic elements feels nice. For example, I’m already planning on writing about a Black Panther Epic Collection I own where Rich Buckler contributed pencils to several issues; Spidey fans may remember him as the artist behind Peter David’s “The Death of Jean DeWolff,” meaning that I intend on publishing the Black Panther post shortly after the TDoJDW blog. See? Connectivity.

Another thing to note is that I don't intend on being as “fine-toothed” about this as I am with my Spidey blogs. Man-Wolf: The Complete Collection, for instance, contains a myriad of stories centered on the slavering Man-Wolf from multiple series. I could write five or six posts about the guy were I to cover the collection chapter by chapter. I originally intended to, actually, but after running into a few stories where I realized I didn’t have much to say, I figured giving an overview was better. Therefore, most reviews will focus less on individual stories and more on entire volumes, trades or omnibuses that collect whole arcs or appearances.

Whether or not there’s a full moon out where you’re reading this, you’d better close your windows and lock your doors...cause the Man-Wolf is on the prowl and lunar lunacy is just a few pages away. 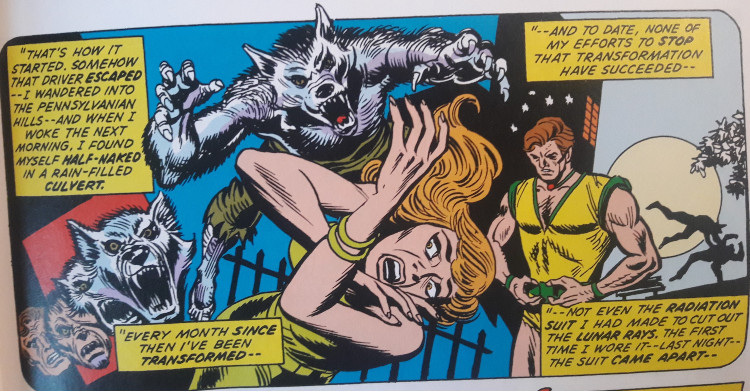 At first glance, this Complete Collection looks a mess: including the ASM issues and PPSSM annual make sense--these are, after all, issues from different Spidey series focusing on supporting cast members, of which John Jameson is one--but what about these others? What the heck is Marvel Premiere or Creatures on the Loose? What does She-Hulk have to do with the monstrous Man-Wolf?

Once you read, pieces begin falling into place. The stories within, though not intended to serve as a massive narrative, meld together rather nicely. Clearly, Gerry Conway doesn’t introduce the character in ASM #124 intending for Doug Moench and Tony Isabella to continue his adventures in Creatures on the Loose; nor do Moench and Isabella ever think of the direction David Anthony Kraft takes the character in Marvel Premiere and Savage She-Hulk. Yet, despite no previous planning from prior writers, later creators latch onto the Man-Wolf concept and continue his story in surprising, occasionally satisfying ways.

Conway’s first few stories are entertaining enough: set shortly after the deaths of Gwen Stacy and Norman Osborn, the Man-Wolf’s introductory tale sees a torn, distraught Peter Parker thrust into a world of horror as astronaut John Jameson becomes corrupted by a sparkly gem he found on the moon’s surface. John Jameson’s struggle against his lupine side dominates this collection, and though the transformation from man to monster can occasionally be coincidental, it never feels like the writers get stuck in a repetitive rut. 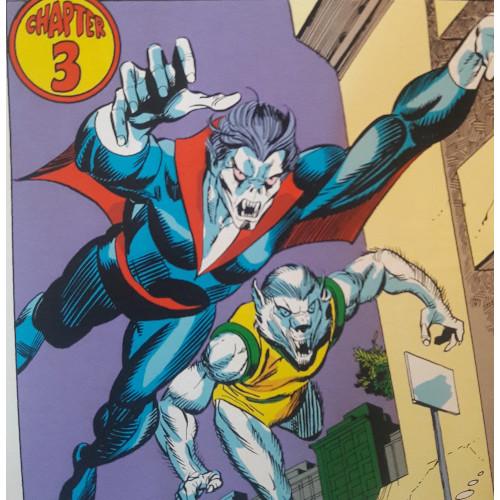 Conway nicely elaborates on the connection between the moon and wolves, blending sc-fi and horror to create something pleasantly unique. He later tries to stretch out the horror aspects in both Giant Size Super-Heroes #1 and MTU #36-37; these attempts don't work as well, as Conway fails to apply the same unique blend to other characters such as Morbius and Frankenstein, turning the stories into cheesy, cliche horror/superhero mashups. Spider-Man pops up in these tales as the superpowered protagonist, but his inclusion in both tales feels coincidental at best. Conway tries weaving in a subplot for Peter in GSSH that goes absolutely nowhere, diluting his impact, and the hero's appearance in the MTU issues feels rushed, just a way for Spidey to worm his way into the story.

Spidey's awkward appearances, however, do remind the reader who the real star of this volume is. John Jameson flourishes under Kraft in Creatures and Premiere. These are the issues where the character really comes into his own. By time Kraft has taken over, Moench and Isabella have already separated Jameson from his Spider-related origins, inserting Kraven the Hunter briefly as an adversary. Under Kraft, Man-Wolf endures a whole host of insane adventures, each one surprisingly entertaining and wonderfully constructed upon the previous excursion. S.H.I.E.L.D. and the Hate Monger make appearances, providing decent tethers to wider Marvel continuity. To his slight detriment, Kraft toys with some ideas Moench and Isabella seeded in their early issues; he brings back a mysterious villain the other writers introduced, a character wholly forgotten about until it’s convenient for Kraft to use him. Kraft works best when he abandons prior plotlines, forging ahead on his own. 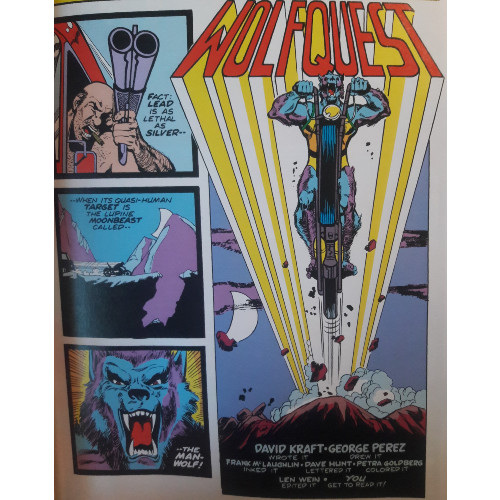 Kraft is wise in allowing Jameson to develop and grow as a hero, his sci-fi instincts guiding the Man-Wolf well for most of the narrative. Kraft truly dives into the purpose of the stone than Jameson wears, transforming the bauble from a mere moon rock into something far more sinister. Conway may have introduced the Man-Wolf as a blend of science fiction and horror, but Kraft is the writer who really latches onto that idea. He seems to understand the connection implicitly and strives to fulfill it best he can.

Regrettably, much of Kraft’s work is undone when Creatures transitions to Premiere--three years passed between Creatures on the Loose #37 and Marvel Premiere #45, and I wonder if Kraft either forgot the direction he was initially heading or was editorially mandated to change the story’s direction. Suddenly, John becomes involved in a sword-and-sorcery adventure, and though it helps his character change, the shift feels odd. To go from fighting enemies aboard a spaceship to fighting warriors atop flying lizards is a dramatic turn of events. You go from Star Wars to Conan the Barbarian in an instant, and you're not given much time to adjust mentally as a reader. 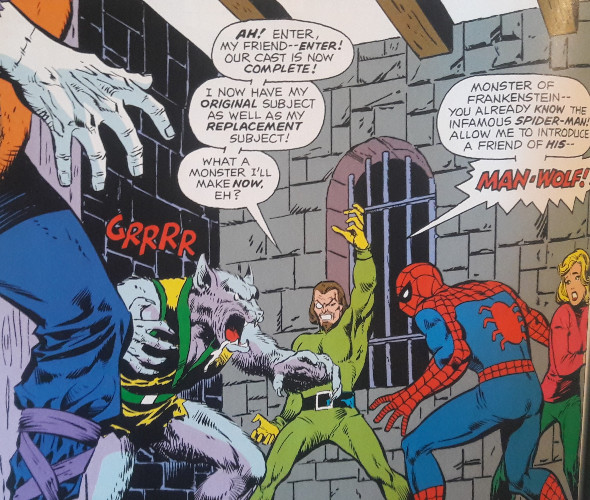 After Kraft wraps up his arc, the collection takes a bit of a dive. The MTU issues, again, turn towards horror. Conway fails to acknowledge the Creatures and Premiere stories (or even Jameson’s humanity in general), sacrificing John’s development for his own original two-parter. Similarly, the ASM issues following this storyline (written, appropriately enough, by Marv Wolfman), don’t feel as indebted to past events as they ought to be. In fact, you could flip from GSSH #1 to ASM #189 and feel like you haven’t missed a thing. Or, alternately, you could read the Creatures and Premiere issues in their own, isolated bubble and not miss much. That’s not a complaint about the volume itself, but more of a cut against the writers who I wish had done some more digging into their continuity.

Kraft returns for the She-Hulk issues, bringing back characters from Premiere for a sequel to his original story. Again, Kraft proves himself a stronger writer than other individuals here by tethering the She-Hulk issues not only to his previous arc but the ASM issues I just mentioned. He’s a class act when it comes to continuity, providing explanations that aid the transition from Man-Wolf’s previous appearances to this one. Unfortunately, he fails to make his frame tale interesting, and any moments he chooses to focus on She-Hulk can be glossed over without missing too much.

Fortunately, he makes a triumphant comeback for the PPSSM annual, which wraps up the Man-Wolf tale with some decent finality. Characters return, subplots are resolved, and a chapter on John Jameson’s life is definitively closed. The entire issue is an engaging testament to the character that sees Jameson’s ultimate, final struggle against the monster inside him. While none of the writers have done much to explicitly regard Man-Wolf as a hero, Kraft seems to be most aware of that valiant struggle between man and monster. It’s fitting that he should wrap up John’s tale; outside Conway, he's developed the character the most.

Readers may be drawn to this collection purely by the various “big names” associated with the stories within. Gerry Conway, Doug Moench, John Byrne, Sal Buscema, George Perez, Gil Kane, and Ross Andru all star in this compilation. Seeing early George Perez work is highly entertaining, especially considering he came onto Creatures as a guest penciler who then stayed on indefinitely. His two-page splash panels are a highlight of almost every issue, capturing dramatic scenes in their full-color glory. Stars like John Byrne and Sal Buscema are instantly recognizable, meaning fans of their other work (such as Byrne’s association with the Uncanny X-Men) may appreciate their inclusion here. 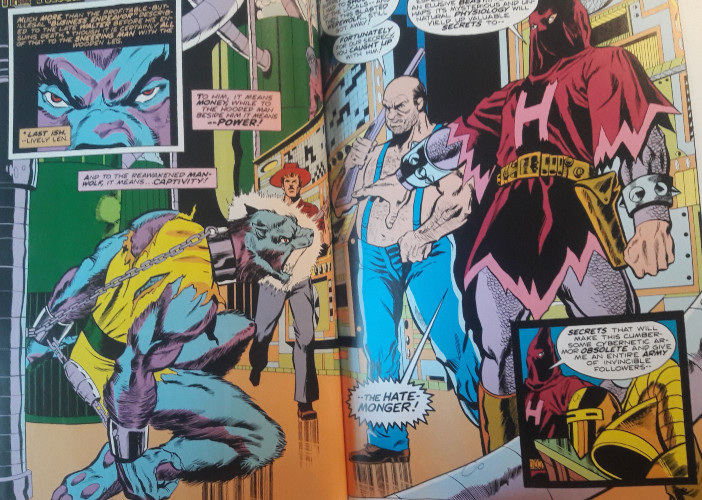 Man-Wolf: The Complete Collection doesn’t escape without getting its fur caught in a few briars. Story and personnel changes mean dramatic shifts in tone and narrative, upending certain entertaining ideas. Horror, sci-fi, and fantasy flit through the stories collected here, not in equal measure. Fortunately, strong tales make their mark and good creators get a change to make impressions on the pages. Above all else, this volume is truly a “complete collection”--though it contains several issues from different series, it never feels like an anthology; rather, it reads like a long-running narrative, logically starting and moving, occasionally stumbling, but clawing its way to a successful finale.