I have enjoyed doing these "Top 10" lists style of blogs, for both my action figures and LEGO minifigures, so I thought I'd continue doing them. Thinking back over my other LEGO blogs, I've had some dealing with sets specifically, others with minifigures specifically, but none detailing any of the vehicles. To me, the minifigures are the absolute number one selling point for any Superhero set, but the vehicles are nothing to laugh at either. It can be pretty cool to see some iconic crafts from comics or a movie be rendered in LEGO format. Most of the time, though, the level to which I enjoy a vehicle is how accessible it is. Is it easy to insert and remove minifigures? Does it drive well or "fly" well? Is it clunky and awkward to use? Those are some of the determining questions, but play value fits in there nicely, too. So, with that in mind, I'll move on to the first half on my Top 10 LEGO Superhero vehicles ever. 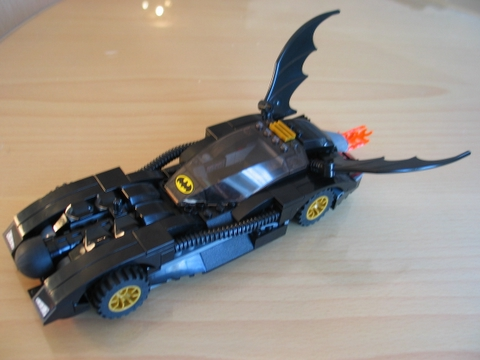 Why: My number 2 minifigure of all time was Batman, and that specific Batman came from a set with this version of the Batmobile. That's mainly why it made the list, because it helped to kick off my Superhero LEGO craze. Of course the vehicle itself has some nice attributes. It's an iconic vehicle, Batman's main use of transportation for getting around Gotham City. Joker robbing a bank? Two-Face stealing jewels? Just jump right in the Batmobile, and you're off. It's fun to make the car speed through my imagined streets of Gotham. The big missile in the middle is imposing, the cockpit is nice and snug, and the wings on the side prove without a doubt this is Batman's car. The one downside, and why it's rather high on this list, is that it can be sort of clunky. It's a wider vehicle with no easier way to grab it other than by wrapping my hand around the top and maneuvering it around that way. I like more streamlined vehicles that can easily slice through the air or roll along the floor. But other than the difficulty in getting this thing around, it's a fun car that embodies Batman's strength and ferocity in fulfilling his mission. 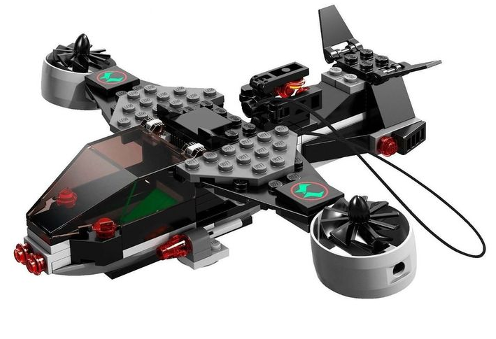 Why: The most sinister villain in my LEGO universe needs to get around somehow? How else will he get from Latveria to New York so quickly? Since swimming isn't an option, Doom chooses to soar through the air! A cool build, the plane is sleeker than the Batmobile. Like the Batmobile, it comes with offensive weapons, but these are nice flick-fire missiles that pop out of place and sail towards their targets. Much easier to move around than a giant, rubber-tipped bullet. The plane also comes with a little grappling hook that Doom can use to grab his enemies or any possession that he wants to take. Turbines are nice to twist and turn, allowing the plane to both hover and fly around. A few decals give some decoration, though not much. Honestly, though, this vehicle is nice because it helped add variety to my set of vehicles, which consisted mostly of trucks and motorcycles. With a lot of heroes and villains who can fly, it's nice that characters who can't now can have their own way of joining the fight in the skies. 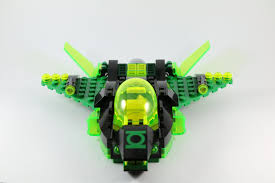 Why: This vehicle came from the first 2015 set I bought, which was mainly for both the Green Lantern and Sinestro minifigures, one to round out my Justice League team, the other to add a stellar villain to a DC rogues gallery heavily populated by Batman foes. The main reason I like this jet is because it utilizes a lot of great colors and pieces. Though it's fun to play with, it's also really awesome to look at. From the transparent green window and fins, to the wings and weapons, and to the mixture of both green and black, it looks like a Green Lantern jet. Again, it's a sleek model, allowing for easy play, plus four weapons (two missiles and two guns that fire studs…which I guess are just called "stud-shooters") that are easy to use and reload. Given that Hal Jordan is a pilot, this looks like the perfect craft for him to concoct. My only question is, since GL can traverse the universe with the help of his ring, what does he need a jet for? I've fixed that dilemma by letting it be a jet he creates for allies that cannot fly (or as a construct to crash into enemies), but the question makes sense, I suppose. It'd be like giving Superman a rocket…or Spider-Man a bike. Oh, wait, he's got one of those… 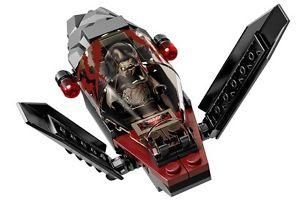 Why: The third aircraft to make it on this list, the Necrocraft is cool because it's really small. As I've said, I don't like using bulkier items or vehicles as much. Hard to grip and move around. With the Necrocraft, I can wrap my fingers around it well and get it to zip around the sky. Having not seen the Guardians of the Galaxy film before purchasing the set with this ship, I had to just imagine what it was capable (but, hey, it's not that difficult to figure out what an evil alien one-seater that sails through the air can do). Basically, it's a grunt vehicle. In the movie, thousands of Sakaarian warriors fly in these things, so it's easy to "mass produce" these ships in my head. It's the perfect little craft for a horde of Sakaarian warriors to attack planets and heroes with, but at the same time, it's easy to have heroes demolish scores of Necrocrafts. They're tiny, but not very tough, allowing for some fierce but simple space battles. As I've mentioned with certain minifigures—like the Sakaarian warrior and Hydra soldier—the best part about this craft is that it can be turned into an entire fleet, letting my imagination create an evil alien army to menace my heroes. 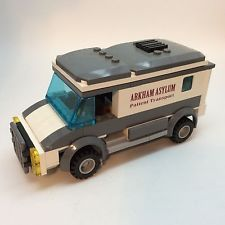 Why: This may sounds like a weird one to have on this list, but the prisoner transport vehicle is actually a pretty cool truck. This vehicle is from an Arkham Asylum set, which is arguably one of the best sets I have ever received. The vehicle itself is enjoyable because it's fun to use for various storylines: "break-out" adventures, where a dangerous supervillain is being transported to jail and breaks free of the vehicle, potentially trashing it before escaping into the unknown; "infiltration" storylines, where a villain sneaks into a prison by pretending to be unconscious or by taking over the vehicle; or even just "battle" sequences, where it's a random car that gets crushed or flipped by battling enemies. Like the Batmobile, it's a study build; unlike the Batmobile, it's easy to move around and drive. It also came with a board that villains could be laid on and chained up, meaning that this thing was built to carry around some pretty dangerous cargo. Just the idea that it can bring guys like Killer Croc, Bane, and the Joker to the prison where they belong is cool, but a lot of the potential comes from the fact that it can have a variety of purposes that can be adapted to whatever story I feel like playing.

That's the first half of the list. LEGO not only makes some awesome sets with many fantastic minifigures, they add a whole other dimension by introducing some pretty great vehicles. The fact that each vehicle doesn't necessarily fit to its original purpose is great, meaning I can let my imagination and story-telling mind go in any direction I want with an arsenal of cars, planes, and bikes.