Back in the fall, soon after starting school, I was encouraged to work on what is called a Richter Grant, a program offered by North Central College where students create a grant proposal around a potential research project. If the proposal is accepted by the Richter Committee, the college will give money to the student to do their research. Many of these are completed by Honors Students as final thesis projects and are typically combined with Study Abroad opportunities. Though I’m not an Honors student, I, along with the much-needed help of my advisor Professor Martha Bohrer, crafted a project around Warren Hamilton Lewis.

“Who’s that?” you ask. I’m not surprised. Not many know about the older brother of C.S. Lewis, acclaimed author and professor, whose works include The Chronicles of Narnia, Mere Christianity, and a variety of other works. The lack of scholarly research around this older and much-forgotten Lewis boy proves that he has, for so long, lived under his brother’s shadow. However, as I’ve found, what is known about his life is as interesting as Jack’s (a childhood nickname of C.S. Lewis' that stuck throughout his life). Hence the project, to bring his story to the surface. Specifically, I’m uncovering his childhood, creating an essay that will not only pull in events of his younger life but also pull in many other elements, such as Irish history and physical observation of places he lived and attended. That’s where the Study Abroad comes in. That’s why, I argued, I needed to travel over to Europe. 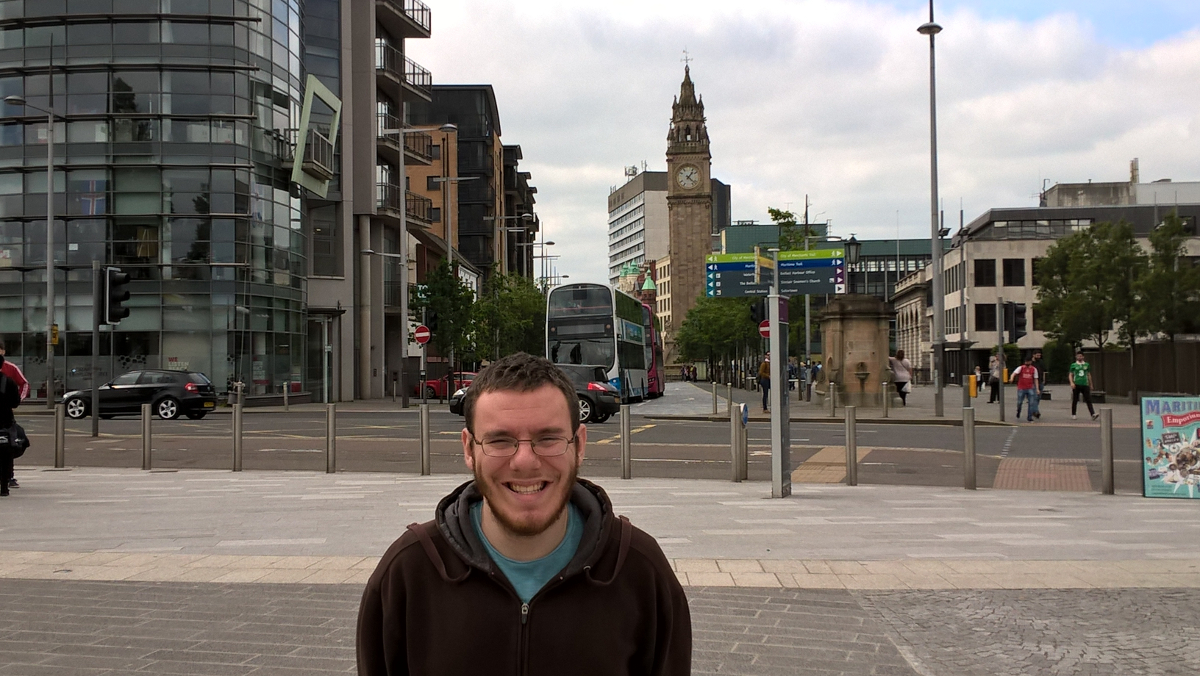 After about nine months of researching, calculating, writing, editing, rewriting, more editing, and one rejected attempt at submitting the proposal with very helpful suggestions in return, my research grant was accepted. And after some more time spent planning for an overseas adventure, I’m now in Europe. Belfast, Ireland, to be exact. Allow me to elaborate on the trip as has happened and as it will happen. Thus, I will hopefully put out a series of blogs covering the days I’m here.

There really is no better way to begin this blog than “Once we got to Europe, everything was good.” My dad and I (who was wonderfully able to accompany me on this trip) were supposed to leave Thursday, June 16th, but due to a variety of complications (such as flight delays and a cancellation), we unfortunately left the evening after, June 17th, after waiting around O’Hare all day the 16th. Finally landing in Europe the 18th, we arrived at out hotel. 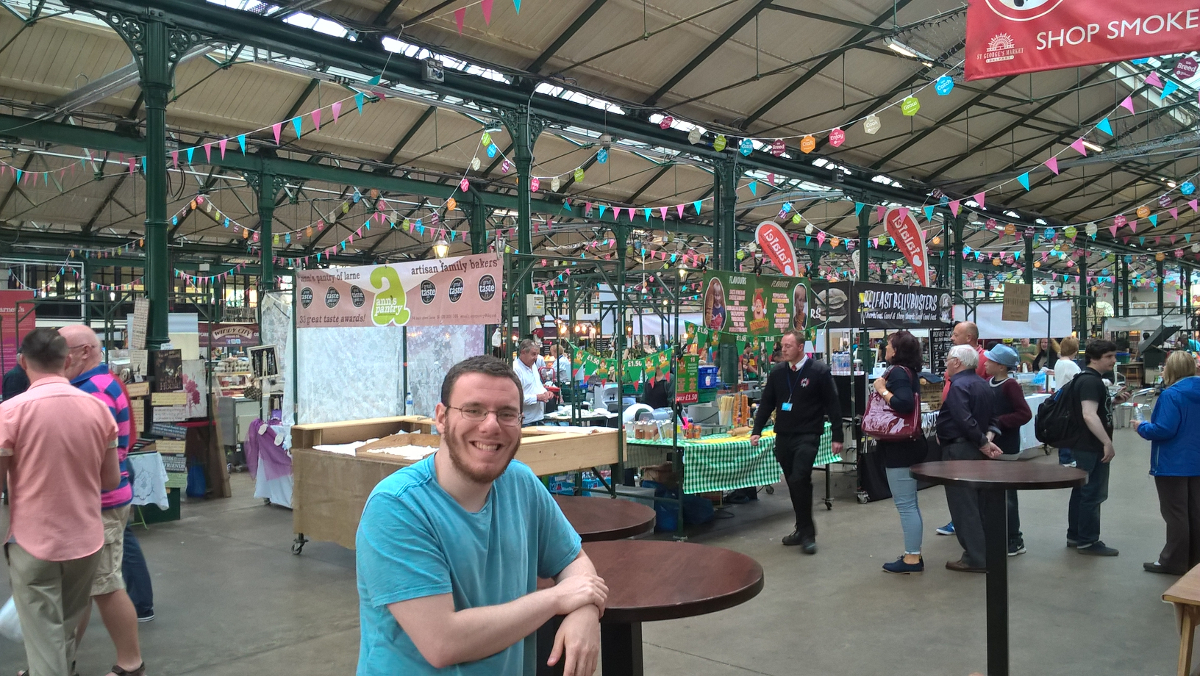 So, technically, today, Sunday the 19th, has been our first full day in Europe. In pouring rain, Dad and I visited St. George’s Market, a weekend market swarming with stalls that sell everything from sandwiches (on “baps,” which is a type of bread roll) to fun chocolate desserts. Following this, we walked down to Queen’s University, which was where the Lewis brothers’ mother graduated from. We had hoped to see a C.S. Lewis Reading Room, but their library was closed. However, we were able to see the Ulster Museum, and this has helped me get a sense of the Irish history that would’ve occurred during the time that Warren lived.

Dinner was at a very interesting restaurant named Grannie Annie’s, where I had a great burger and chips (they’re not “fries” here, they’re “chips,” and they’re pretty much fat, fried potato wedges) and some nice live music. I also got to Skype my family back at home. It was good to see them. 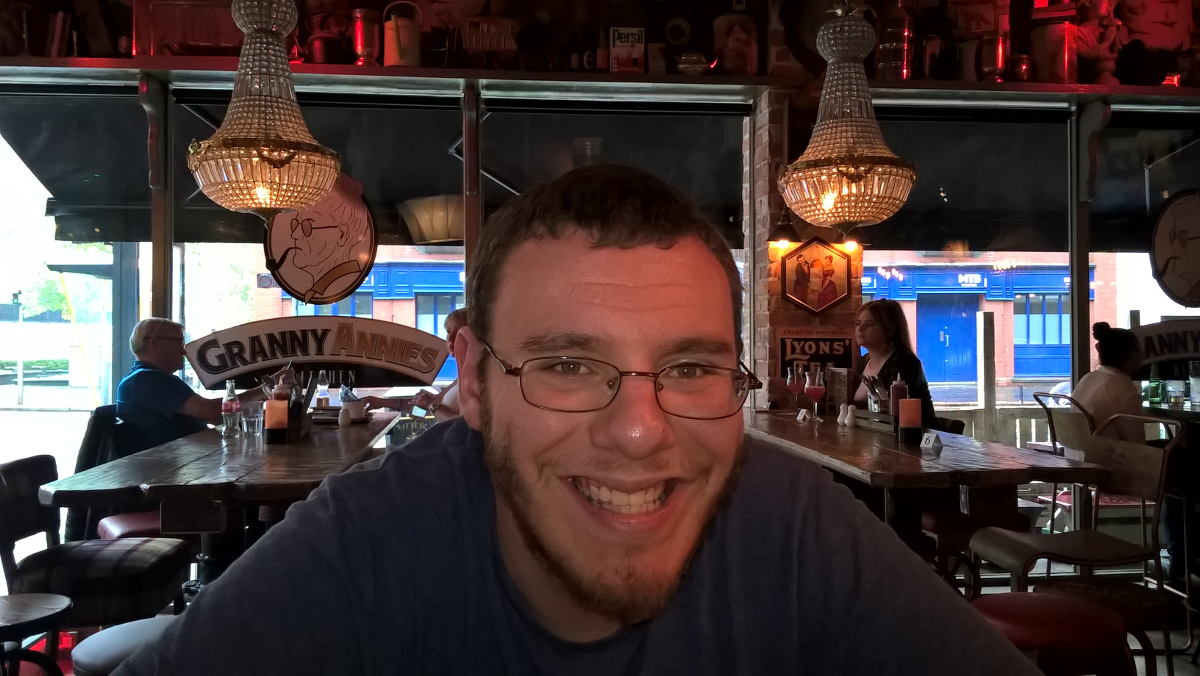 So…what is Ireland like? I think, when observing this other country, I use a concept molded by literary theorist Jacques Derrida: “differance.” Derrida claims that objects and concepts don’t have inherent definitions themselves; they are, instead, described in relation to the differences they have to other things. For example, 1 is 1 because it is not 2. It’s confusing, and I don’t think I get it fully, but I think it applies here. My concept of Ireland is being crafted as I compare and contrast it to the U.S. Perhaps the greatest difference here is the driving. Crossing the street and certain driving rules are the same in both places, but the left vs. right side of the road concept here is the biggest aspect. Also, in Ireland as well as other places, you pay in “pounds” instead of dollars, take “lifts” instead of elevators, and say “cheers” a lot instead of goodbye. There are interesting differences between the two places, and as I get adjusted to some, I hope to discover more. There is a lot that is similar to home, but there’s enough different about it to make it a unique place. It rains a bit too much for my liking, but other than that, it’s pretty cool being here. And I haven’t even seen England yet.

There’s not a lot to talk about today, but once I get deeper into the research, there will probably be more to write about. We’re also 6 hours ahead of the U.S., so it’s about 10:00 here and I’m tired. So goodnight. Cheers.