Yesterday, in the afternoon it occurred to me that it was May 5th, the anniversary of my parents’ wedding. However, I started thinking more about my dad as it was also the day 6 years ago that I gathered with family members to be with my dad as he passed away moments after midnight on May 6th (being late for his anniversary as he rejoined my mom seemed kind of appropriate for him). Just like the words I shared at his funeral, my thoughts came to me randomly, but centered on the paradox of an image. 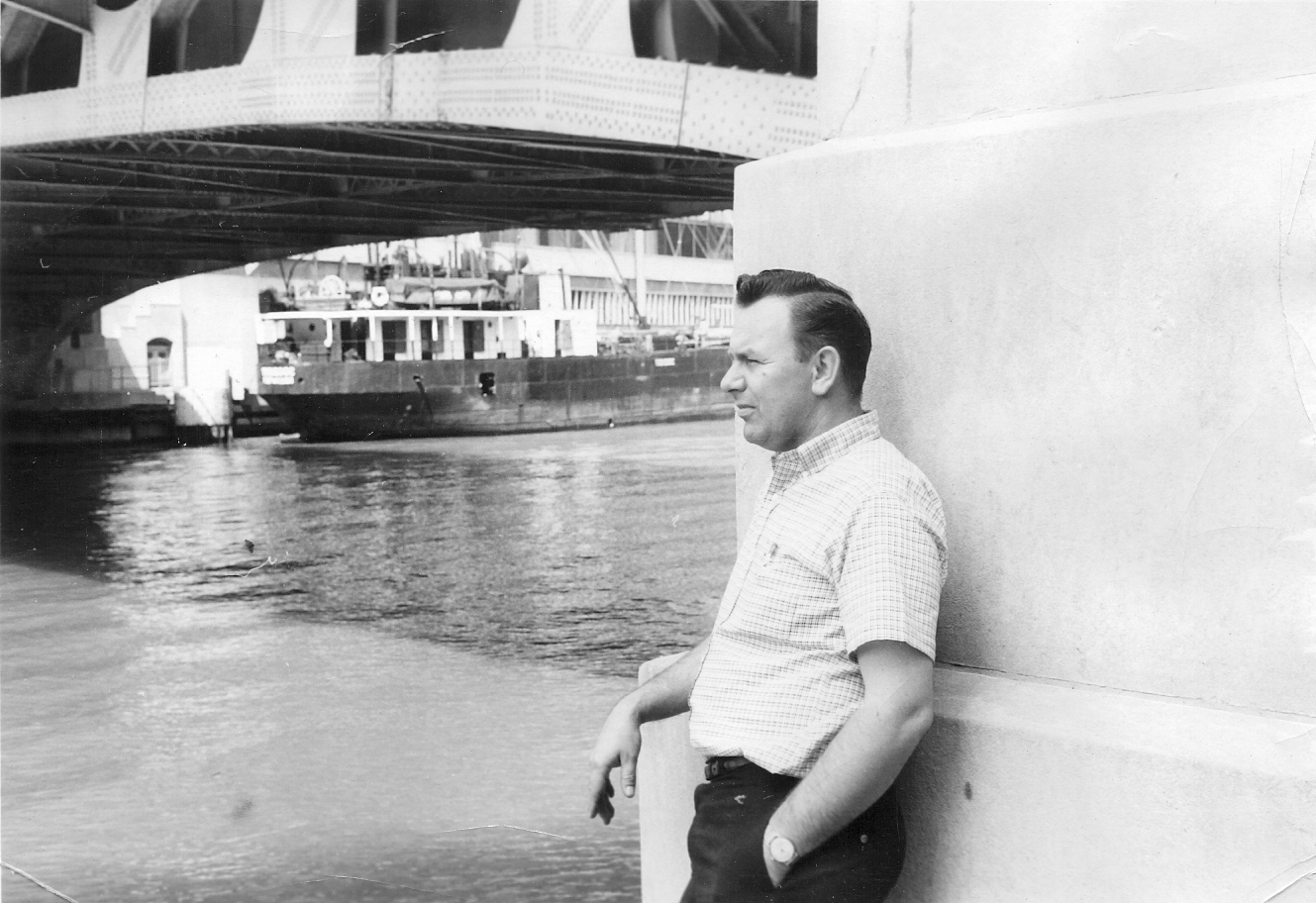 A photo that I had first seen only after he was already gone came into my mind. It is a picture of him as a young man looking out at the Chicago River. He looked young, confident, carefree and had cool hair (his hair never changed, guys can do that). A real gibshot. That phrase originated in a small town newspaper from Corn, Oklahoma. That is where my dad was from. I remember going there as a kid to celebrate the town’s Diamond Jubilee Anniversary and being amazed that the whole town seemed to be (and probably was) related to us. We visited there again many years later prior to continuing on to California for a stay with my grandparents. While in California, my grandparents, who still received the Corn newspaper, saw an article about how Maron Kiehn, the gibshot from Chicago had been in town (big news in a small town). Either the editor did not notice the misspelled “bigshot,” or he thought it was funny as well, whatever the reason, a nickname was born.

Returning to the really cool photo, doesn’t every guy wish they could have a “James Dean” pic of themselves to plaster on every social web page? I mean, all it is missing is the cool jacket. It was probably taken by his main lady, my mom, so he was feeling really good about it at the time. It just screams, “Hey Chicago, the bigshot has arrived.” The funny thing is, he was never a bigshot. He was a very unassuming man. In reality, he more than likely after this very cool moment said, “Hey Chicago, Maron from Corn, err actually Bessie, Oklahoma is here. The gibshot has arrived. Uh, wait, that came out wrong.” Then, smiling and looking at his girl, they laughed. Gibshot, not bigshot, very unassuming.

Unassuming, not a word for today. It does not sound cool at all. It basically means not pretentious or arrogant, which is not the times we live in. Definitely not as cool as the photo. If I had a photo like that, I would have it on my wall, or desk, and my kids would probably be sick of me showing it to them. I never saw the photo until after he was gone. He was unassuming, yet I remember numerous people fondly telling me during his visitation service about their relationship with him. With so many people from different areas of his life, I would have thought that he must have been alpha dog everywhere he went. He wasn’t. He was unassuming. He made people feel comfortable. He was a person just like them, no better, no worse.

The last few years, I have been thinking about the Gospel more. Like realizing more and more that the Gospel is the greatest thing ever. What greatest thing? That at much cost to himself, God would give his life as the payment to buy us back, being simultaneously the just and the justifier. If you really think about it, what could be better? In one respect, I am humbled because I have done and will do things that are wrong, and in another respect I am affirmed as I have been justified by God himself, but not unto pride as it has been a gift of which I have not earned. Taking this truth to heart, would lead to an unassuming life. A gibshot life perhaps. When putting these thoughts together with what I heard from his service, my dad seemed to have a good grasp of this gospel truth. He was a person just like them, no better, no worse.

I wonder what it would look like if I was able to meet my dad, but he was not my dad (you know what I mean), perhaps like on a trip traveling. If we talked for moments in the hotel lobby, I probably would have walked away without much of an opinion as there would be nothing to immediately impress me. Definitely not a big business kind of guy, looked kind of lost to me. Perhaps he is still there for breakfast the next day and you chat a bit more. Friendly guy you think. What was his name again, Marion, Marran, Moro..., no that’s not it. I might even have told my wife about him. However, the next day at breakfast I might be looking for him, especially to avoid the guy named Clavin. I see him and stammer as I try to remember his name, he tells me to call him Jim (my dad’s middle name, good fallback name). Good conversation, Jim is a good listener. He patiently listens to the stories my wife no longer wants to hear. I tell my wife we talked again and she asks me more details about him. I do not have anything. Jim didn’t tell me, or perhaps I did not ask. Next day, we are both moving on, but I had time to ask about him. He is a Christian man, worked at ABC television, a widower of a few years, and has 4 kids, in where he seemed particular found of his youngest son. I wish I would have gotten to know more about Jim, he’s a great guy. Seems like I could tell him anything. No advice, just listened and chuckled at the right times. I drive and ponder a bit, that I should be more like Jim, then I notice a careening Taurus in front of me. “Holy cow, June (good fiction wife name), that guy in the Taurus just did a 360 while spinning into the grassy median, came back out again going the same direction. Totally inconceivable. He looks like some guy pushing 80 doing 80. Most remarkable thing I ever seen. What a real moro…., hey that not a moron, that’s Maron. That’s Jim’s first name, Maron. Boy does he have a story to tell. He’s going to be a real bigshot.” (All fiction, except for the car spinning, actually happened.)

Today, I am glad that I took the time to remember my dad. You would have liked him. Gibshot, not bigshot, very unassuming. Despite what you hear, that's a good thing.