I guess the title is a bit of a misnomer, now that my research is complete, but it’s catchy, so I figure I can keep it.

Dad and I celebrated our last day in England, I guess you could say, by taking one final trip into the heart of London (well, not heart exactly; we never got near the middle, stayed more so on the east side, but you know what I mean). One attraction we wanted to see that we hadn’t gotten to experience last week was Churchill’s War Rooms, located west of the River Thames. Like we did the last time, we took a train into Waterloo Station and walked across the Thames, passing the Eye, Big Ben, and the Houses of Parliament again. It was kinda nice having a little experience from last week to rely on. We’re turning into quite the European navigators. Some good skills to keep handy in our back pockets, I suppose.

The Churchill War Rooms—and the accompanying museum covering Winston Churchill’s life—is a fascinating place. These are rooms Churchill and other officials met in to plan out stages of the war. Like the Dover Castle secret tunnels we explored a few days ago, the War Rooms are a labyrinth kept out of sight from prying eyes, an underground defense against German forces during one of the darkest times in England’s history. Unlike the Dover tunnels, the War Rooms were dug out for the specific purpose of being used during World War II only, a secret project in and of itself. Using audio devices to listen to on our self-led tour, we got to peer into a variety of rooms, faithfully restored to how they would’ve looked when they were inhabited by the Prime Minister, his wife, his staff, and others. Cramped rooms to sleep in, dank rooms to bunker down in in the event of an air raid, spacious rooms for meeting, plotting, and gathering information. Churchill and his staff worked round the clock on a variety of duties, ready to head deeper into the ground at a moment’s notice once sirens began blaring. Video interviews with staff members revealed that Churchill was a firm, yet effective, leader. It’s a place that adopted well to the conditions of war, filled with people who also needed to adopt to those conditions in order to survive and bring England through the war. Actually, the rooms weren’t apparently as well-adopted as they could’ve been; a direct hit from a bomb would’ve demolished the place, but this was a little fact that Churchill apparently felt didn’t need to be relayed to the people he was working with. Guy was pretty shrewd, too. 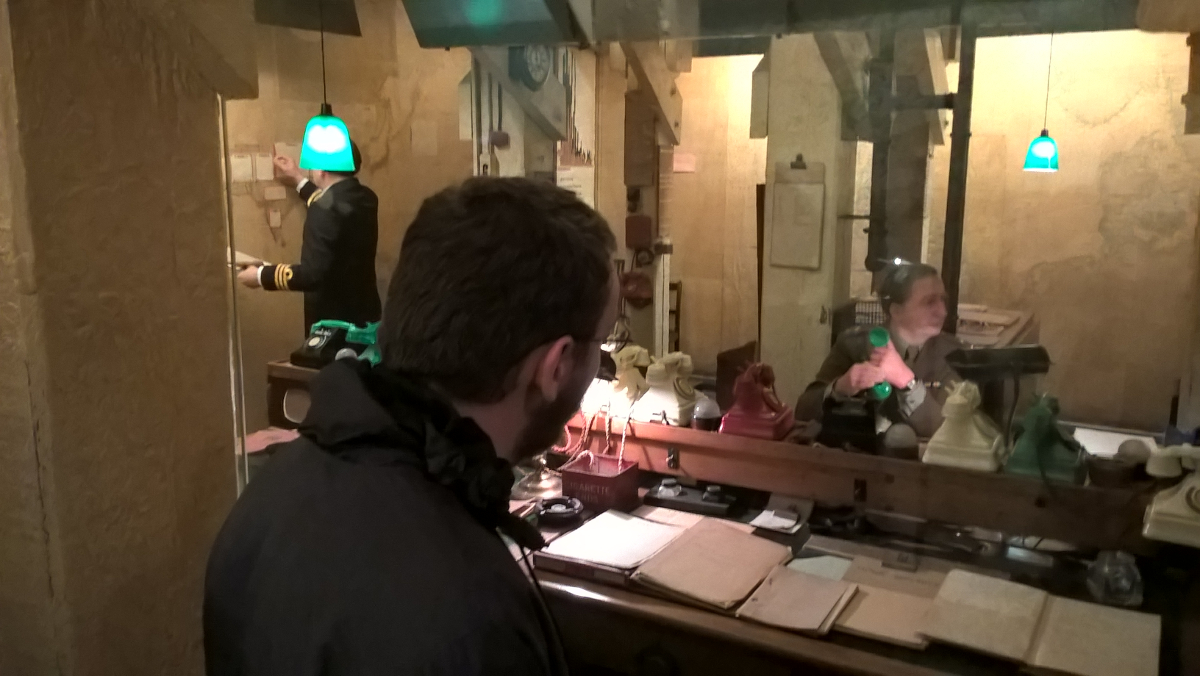 About half-way through the War Rooms, we were diverted into a hallway serving as a detour to a Churchill museum. Beginning with his involvement in World War II as the Prime Minister, the museum covered the rest of his life, prewar and postwar. The man is a pretty fascinating individual. How many other people would’ve faced the horrors of this war—physically imprinted on his own country through the destruction of falling bombs—and not have completely crumbled? Aside from some minor physical ailments, Churchill seems to have made it through the war alright, continuing to be a member of the political arena by serving as Prime Minister a second time and attempting to warn others about communism.

The museum shows what he did during the war: the places he visited, the speeches he gave, the attention he received, the staunch vigor he led an entire nation to adopt. It showed the people he worked alongside, many of whom he typically had very strong opinions on. There didn’t seem to be much middle ground with Churchill; he either liked you or a lot or didn’t want anything to do with you. The museum also showed him growing up, with details about his family life and an interesting story about he escaped a prison camp in South Africa. It showed what influenced him: his family, his experiences, his political ambitions. Honestly, seeing this museum did make me think of Warren, because it somewhat resembles the picture I want to show of him, the various facets of his life and the era that he lived in and grew up in. That’s what this museum did for Churchill in a lot of fantastic detail. I also learned that he and I share a birthday—November 30th—so that’s pretty cool (and, somewhat pertinent to my trip, C.S. Lewis was born November 29th…couldn’t he have waited a few more hours?). 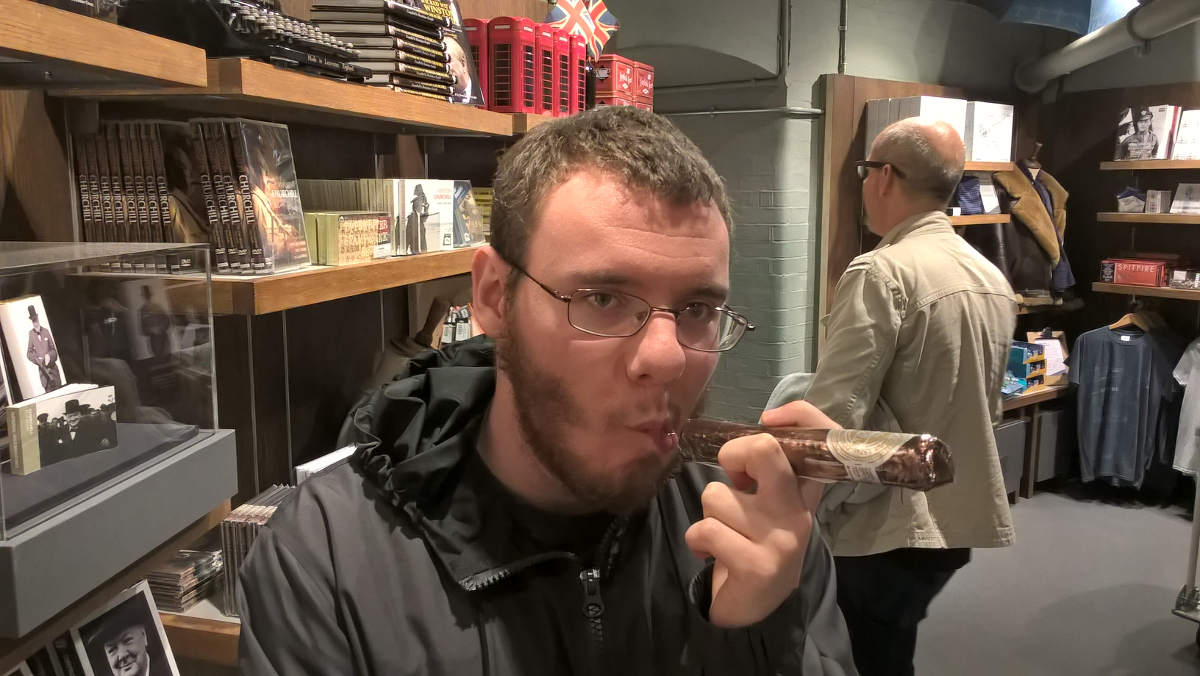 Goofing in the gift shop

Dad and I walked through a few more areas in the War Rooms, which wasn’t as good as the first half because my audio device died on me partway through the tour. We had been told the entire experience should take us about an hour-and-a-half to get through, but I think we were in there at least two hours. We like reading a lot in museums, so no wonder it took us longer. I tend to have a compulsory feeling of reading whatever I come across in a museum that interests me, so it takes a little self-control to tear myself away from a sign or two in order to speed things up. 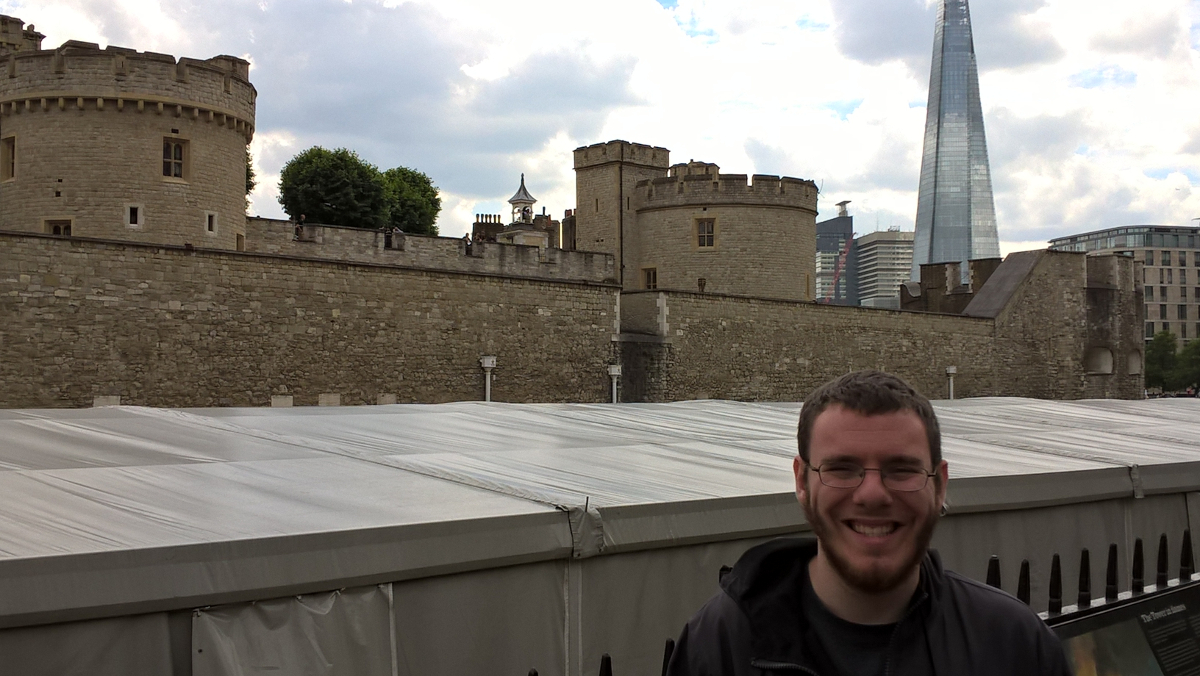 The old and the new

After our excursion under London, we took a subway to get close to the Tower of London, the other attraction we were hoping to see. However, it was lunchtime, and I was pretty hungry, so we stopped at a Thai place where I got BBQ pulled pork sandwich. Yep. Pulled pork at a Thai restaurant. I have learned many things while on this trip, but my tastes have not been altered. But it was good, so I’m not complaining.

We then made our way to the Tower of London. Again, we were propelled into the past, a very old past. Like at Dover, we entered a castle, and we were able to explore many facets of this castle. We visited rooms where prisoners would’ve been tortured by a couple of different devices, though various signs there say that torture didn’t happen often and any assertions to the contrary are typically myth. They did, however, have a number of prisoners there for various reasons, some of whom faced some fairly grisly executions, so I don’t think anything can be done to make people imagine puppies and rainbows when they think about the Tower of London. 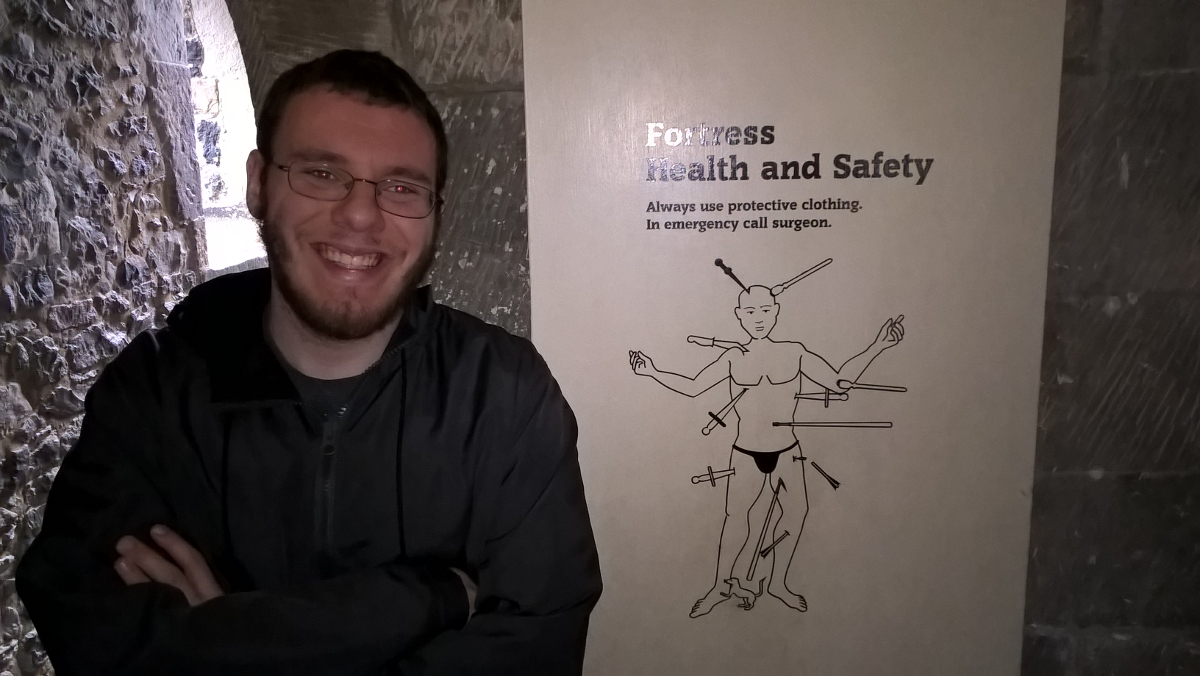 We also got to walk through an exhibit showing off the Crown Jewels. I had been under the impression that the “Crown Jewels” referred to the jewels in the crown (as the name would seem to imply), but that is, curiously, not the case. Now, since I can’t rattle off what exactly fits within the category of “Crown Jewels,” I’m going to take an academic risk and quote Wikipedia. According to this beloved website, the Crown Jewels “are 142 historic ceremonial objects, including the regalia and vestments worn by kings and queens at their coronation ceremony,” which is pretty much what we saw. Robes, crowns, gemstones, pieces of golden silverware. Lots and lots of shiny things used by a lot of powerful people over the previous number of centuries. The Crown Jewels, like much of what we’ve seen in London, represent England’s history, culture, and traditions. Perhaps the most incredible thing about being here is that, unlike America, England has history that covers such an extensive period of time. We don’t have that. In America, you can’t see the remnants of Roman walls, you can’t see castles once inhabited by kings, you can’t see items that have been used in ceremonies that have existed almost as long as a nation has been ruled by a king. And yet, while we don’t have this kind of history now, we will someday. Maybe two hundred or three hundred years from now, people will see our culture, our traditions, our history as something comparable to England’s in terms of length and even strength. Along the entire span of time, we’re a young nation, but it should be interesting to see what the next few centuries bring. It’s amazing to walk along what once was a Roman road. Will people have that feeling stepping through the canyons of Chicago or New York someday? Will that weight, that strength, that importance be there? I can’t answer that question, naturally, but it’s interesting to consider.

Okay, off the soapbox: Dad and I spent a bit of time exploring some other areas of the Tower, and we came out of the exhibits with the good fortune of having worn our rain jackets. I bet you’re as tired reading about rain as I am writing about it, right? Guess the joke’s on both of us, cause England couldn’t say goodbye to us without one final downpour. It was, fortunately, not the heaviest rain we experienced, but it was a moment that made me go “Really? Again?” And it had been a fairly clear day at the start, too, and I think I even mentioned the good weather at one point. Yet again, I am haunted by my ability to jinx myself. That, or I am simply terrible at making predictions. If I ever become a fortune teller, either run the other way or believe the opposite of whatever I tell you.

We boarded the subway again and headed back to our Bed and Breakfast here, pretty tired after the long day. It’s our last night here. One more night and then we head home. As interesting as this trip has been, I’m more than happy to finally be going home.

During our time here, we’ve seen Belfast, London, Oxford, and other towns. We’ve been brought into World War II, World War I, the Middle Ages, and even a fragment of the Roman Empire. It’s been a journey across multiple counties, various topographical terrains, a couple world-famous cities, and two European countries. Lot of pictures, lot of notes, lot of memories. We’ve seen and done a ton, and tomorrow we go home.

Since we will be traveling all day tomorrow, this will be my last blog about the trip itself. Maybe I’ll do another one assessing the trip itself, but let me sign off with a huge thank you to the following people: first, to the North Central College Richter Committee, for reading and rereading my proposal, for making helpful suggestions, and for giving me the incredible opportunity or journeying here for research; to Professor Martha Bohrer, for guiding me through this entire process, for assisting me in shaping the direction of my project, and for making herself available for meetings and answering questions and concerns; to my mom, for initially encouraging me to tackle this project, for continuing to encourage me through the past months, and for helping me through the logistics of traveling to Europe; to Mr. Ken Harper, Mr. Ian Quickfall, Mrs. Terry Bremble, Mr. Andrew Lawerence, and everyone else at Malvern College, the Kilns, and the Royal Military Academy who made my tours work out; and to Ms. Rosemary Wiseman, who kindly accommodated us this past week at her Bed and Breakfast in Richmond. And to my dad, for all the sacrifices he has made on this trip, giving up two weeks of his vacation to accompany me across an ocean to an unfamiliar country, and for all the hard work he has done accomplishing things I’ve realized I probably wouldn’t have been able to do on my own (handling foreign currency, learning train schedules, navigating the opposite side of the road, etc.). He’s been an incredible help—and has provided some much-needed company—and I’m glad that he’s been able to experience Europe with me.