Today, Dad and I paid a visit to the city of London. We let our Volkswagen have a rest today and decided to take the train instead. It took us a little while to get our bearings with the tracks and stations, but navigating our way through the train system was easier than traversing the roads.

We had experienced a little rain the day before, and rainy English weather continued to pursue us dauntlessly. Gray clouds, threatening to pour on us, hung overhead the entire day. Whereas patches of blue had poked through the clouds yesterday, that was not the case today. Lighter gray was slowly replaced by darker gray. In the afternoon, the deluge began, but those details can be saved for later.

The train we boarded took us from Richmond Station to Waterloo Station in London. Heading toward the station on the train, we had become surrounded by skyscrapers that were either being constructed or added to. In this part of town, it seemed, London was building up, towards the darkening clouds. Because of rain the previous evening, the train we were on was originally delayed (stuff like rain that causes delays is called “disruption” around here), but it actually came in quicker than we thought.

The geek in me instantly started making connections to films with some of the things we saw. Having never actually been to London before now, my only previous experience with the city was through movies. Certain places that we saw reminded me of various films or parts of films, starting with Waterloo Station itself, where Jason Bourne went head-to-head with a sniper in The Bourne Ultimatum. Being able to see in real life what I had only previously seen on a screen was exciting and really cool.

Leaving the station, we took a left and almost immediately ran into the London Eye (which the Fantastic Four saved from collapse in Rise of the Silver Surfer!). We did not go on the Eye, and now’s a good time for me to make a point: today, we pretty much saw things, we didn’t really do much of anything. We didn’t take any tours or really enter many buildings. We know we can come into London a second day, so we’ll hopefully get an opportunity to do more things that second time. However, even just seeing London and experiencing London was fascinating enough. 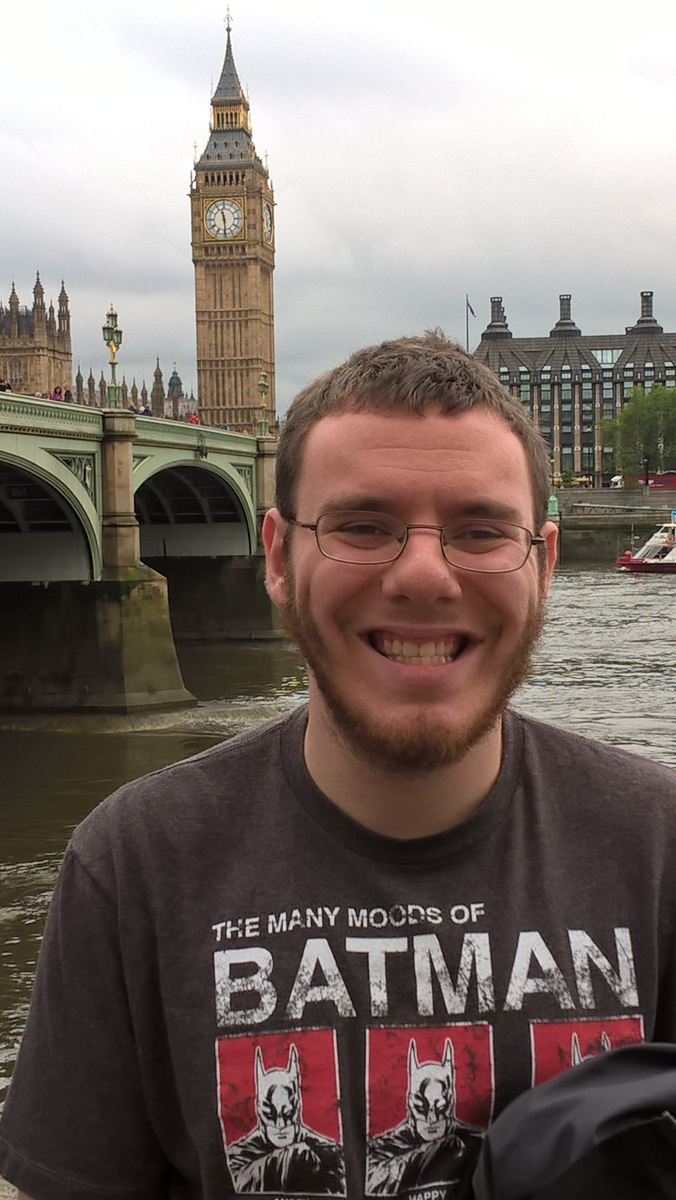 Crossing a bridge, we saw Big Ben and the houses of Parliament. We also took a bunch of pictures of Westminster Abbey (which is not nearly as cool as another Abby I know) and went into St. Margaret's Church, right next to it. Fun literary fact: John Milton’s wife (or, at least, one of his wives) and child are buried there. Maybe that’s a little more macabre than fun, but us literary geeks gotta take what we can get.

We walked around a bit before lunch, spotting news cameras and polling places. All week, we’ve heard about a “referendum” being voted on today to decide whether the UK should or should not stay within the European Union (EU). I’m not sure on all the details, but the UK seems fairly divided over the issue. It sounds like the decision will be given later tonight, so we’ll have to see. We also came across Trafalgar Square and the National Gallery, snapping some nice pictures with lion statues. 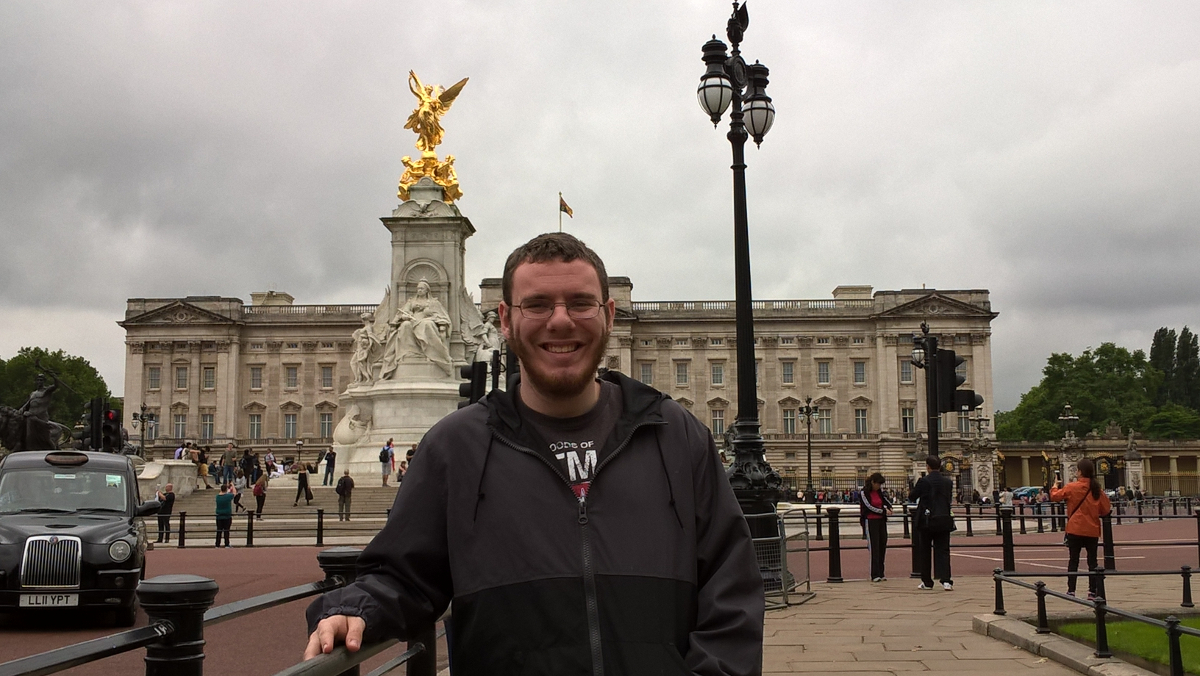 Walking down a stretch of road called “The Mall,” we came upon the back of Buckingham Palace. Though we were unable to catch a glimpse of any of the Royal Family, we could see a few of the guards who probably protect them, as well as other guards throughout the city. They’ve got some pretty heavily-armed people here, but considering that London is a major city, this goes as no surprise.

Finally, I got my opportunity to try Fish’n’Chips at a restaurant called Bag O’Nails, and I say that I enjoyed it, but due to the amount of extra food in the meal, wasn’t able to finish. If I just had straight-up fish’n’chips, I would be fine, so I’ll have to try again. Dad got fish’n’chips too, so we’ve finally both had our first real taste of proper English food. 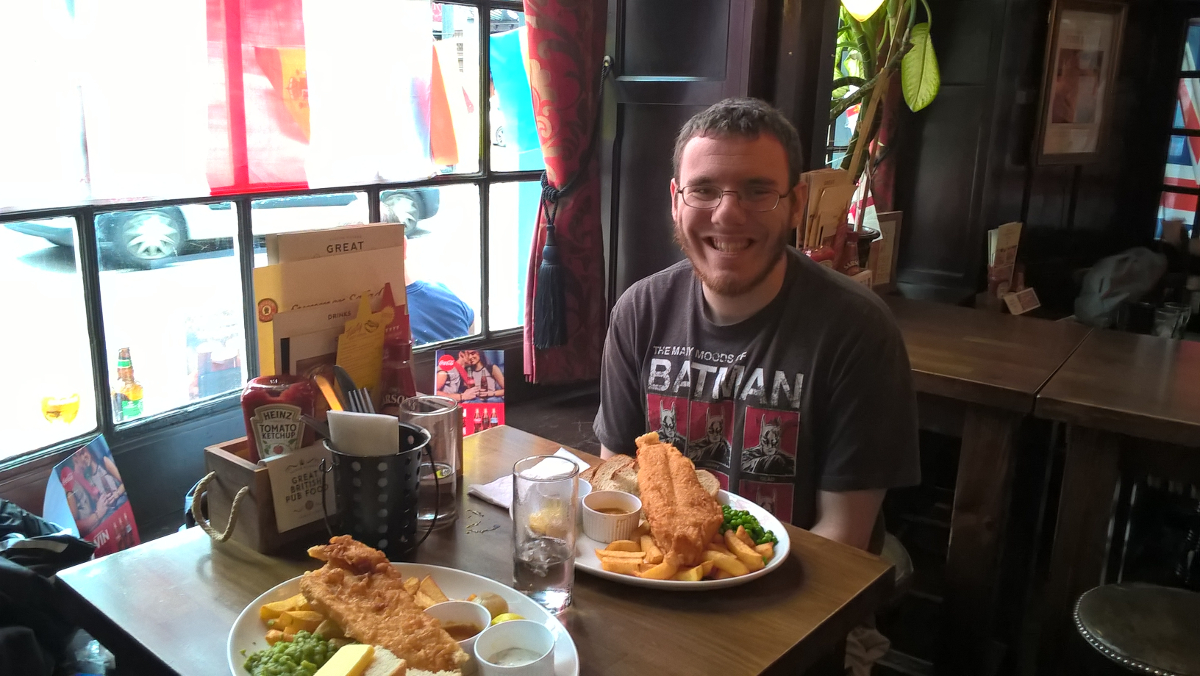 Fish’n’Chips at the Bag O’Nails

The afternoon was a little less successful. We attempted to get into the Churchill War Rooms, but we discovered we needed tickets beforehand, so this will hopefully be something we can do if we go to London again. So then we took a subway to Baker Street in the hopes of entering a Sherlock Holmes Museum, but we chose not to enter because of the line. Also, the clouds had burst upon us, and the rain started falling hard, so we figured the best option was to head back home via the subway.

Like I said, we saw quite a bit, and though our experience was mainly a visual one, it was still pretty amazing to be in the city of London and take in it. Despite not having much experience inside buildings, we hope that will be remedied on our next visit. If I’ve felt we saw a lot, then I hope that feeling will only be that much greater if we go again.