The old adage “When it rains, it pours” proved itself to be true today, but like the day before, the clouds chose to tease us for a while before letting loose. Like I’ve been able to see themes in my research, I’ve also seen themes in this trip: cool opportunities, a couple logistical problems, and rain. Rain hit us in Belfast, rain hit us in London, and rain hit us again in Oxford, where we were today. The bits of Europe I’ve seen are really cool, and I’ve been juggling with the question, “Is this a place I’d like to live?” all week.

My research for today happened a little later in the day, so we were able to sleep in a little bit longer than we had on other days. This was particularly nice, considering we had spent so long yesterday walking and touring London. However, as soon as awoke, we got ready quickly so we could head off to the city of Oxford. Like London, my only experience with this city had been through television—the BBC show Lewis, to be exact—so, like with London, it was neat being able to walk the streets and see the buildings I had only glimpsed on the screen.

We ran into a few bumps on the way towards the city, still trying to learn the twists and turns of the road. Driving continues to be quite the learning experience, and we keep growing accustomed to certain “cultural” norms around here: for example, the lights turn yellow, not only before they turn red, but also before they turn green, but drivers treat them like greens anyway; bikers and motorcyclists occasionally try to ride on the lines between lanes, squeezing past vehicles; people seeing you slow down to potentially let them turn into a lane take that as an absolute fact, wave politely, and drive on, even if you were slowing down for another reason. It can get a little odd sometimes, but we’re managing the best we can.

We didn’t drive into Oxford itself, because we had been told that parking is terrible, so we took a bus instead. A lot of buses here are of the double-decker variety, and I thought it was pretty neat that we were able to ride on the top deck. The drive from the bus station into Oxford wasn’t all that long, but I could easily see where parking could be a difficult task. Yesterday, I’d been able to ride in a subway for the first time, and today I was able to ride on a double-decker bus for the first time. These seem like pretty minor events, but it all adds something to the unique European experience.

When we drove into Malvern two days ago, Dad had commented, “Things are starting to look European,” to which I replied, “Everything should look European.” But, if by European, Dad meant to say that things were beginning to resemble a culture with a vast history and culture behind it, he’s right, and Oxford continues to uphold that tradition. Like I said in a previous blog, Belfast looks like a jigsaw of old and new. London and Oxford both look dominated by older buildings, with modern innovations seeking to sneak in under the radar, Oxford perhaps more so than London. It’s definitely an older city, with some incredible architecture and many historical buildings. 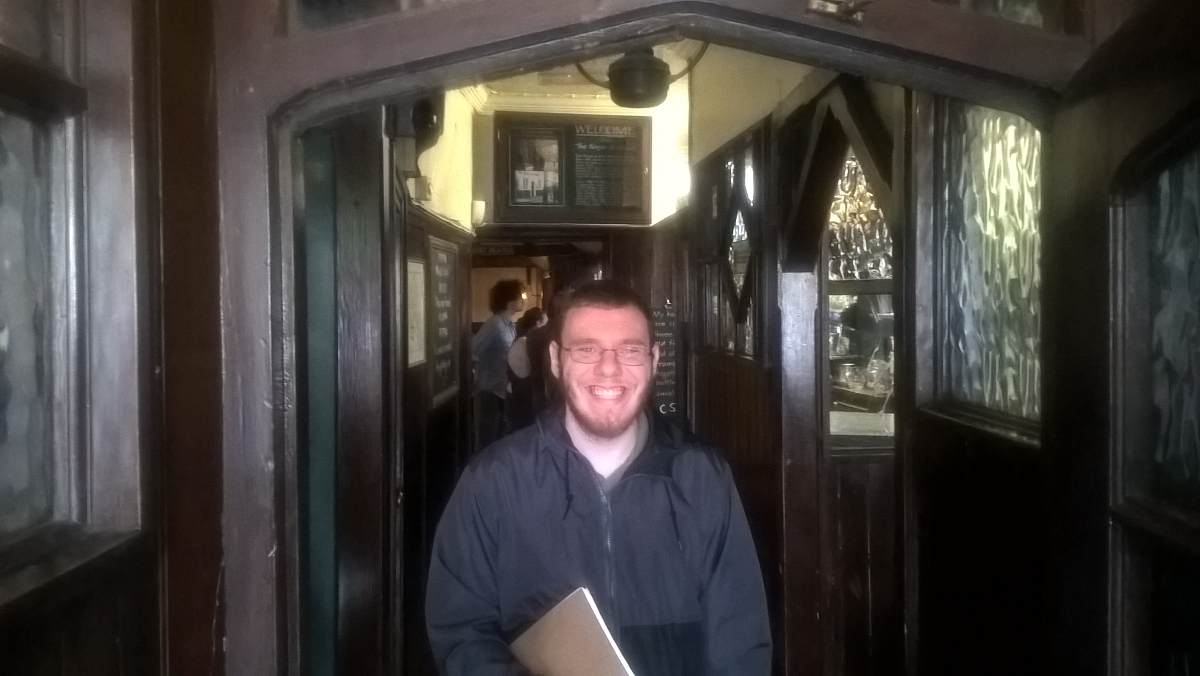 Eagle and Child, Home of the Inklinks

Perhaps the coolest part of today was being able to eat at the Eagle and Child, the pub where Jack, Warren, and some of their other friends got together as the Inklings, a literary group that read and critiqued each other's pieces, such as The Hobbit and The Lord of the Rings. We didn’t see where exactly they met, but the fact that we could eat where they probably ate, walk where they walked, and talk where they talked was really amazing. Like other elements of the trip, it’s all about the experience of being here, about walking in their footsteps, Warren’s in particular. Though his time in Oxford is a little past the period of his life I’m examining, I still would like to use what I learn here about him, and his brother, to bring his story to a close. How does his childhood affect his adulthood? What threads can I see here that weave through other elements of his life? 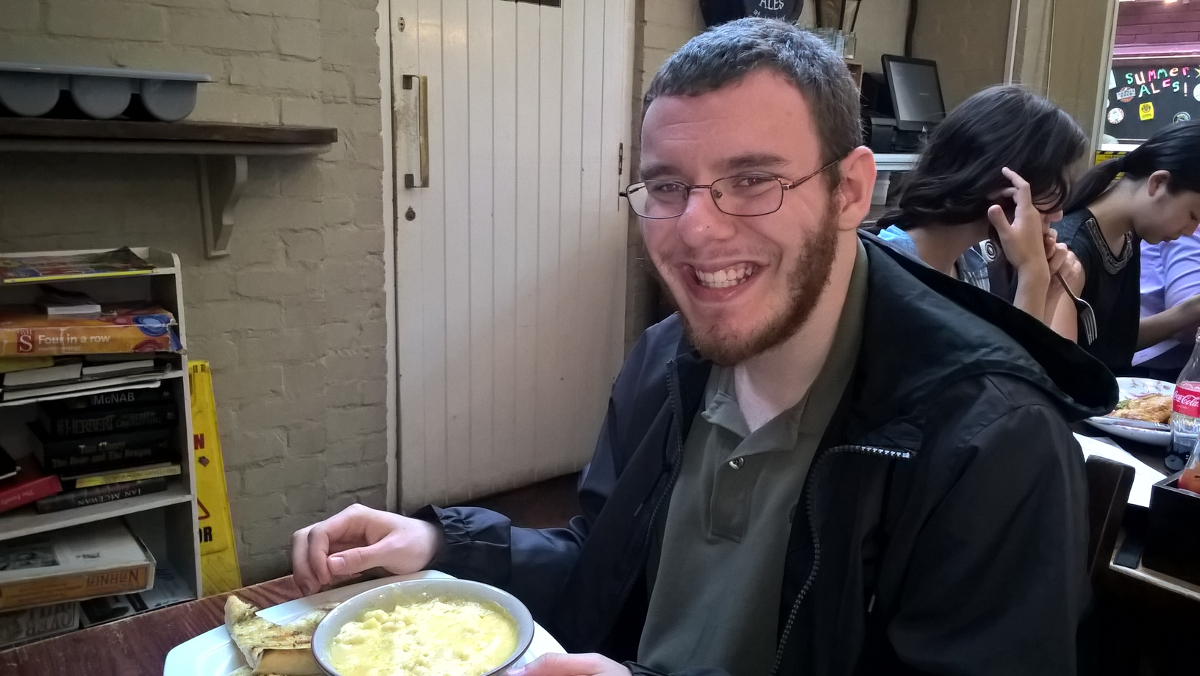 Comfort food at the Eagle and Child

Mrs. Terry Bremble, a tour guide here in Oxford, helped me do that by leading me around parts of the city. I got to see University College and Magdalen College, where Jack learned and taught respectively. I got to see places where he walked, places where he ate and drank…again, like the Eagle and Child, I got to be where he had been. I let my imagination wander. Like my other tour guides, Mrs. Bremble wove a story of an earlier time, helping me set the historical and cultural stage for the project I am working on. She also made specific tethers to Warren, so I also have pieces I can slot into his story fairly well.

I am here to answer a question: who was Warren? And I’m finding an interesting theme: stained glass windows. Warren dedicated a stained glass window at St. Mark’s for his parents; he sat in a chapel surrounded by stained glass at Malvern; he and Jack sat under a stained glass window I will be seeing at a church by the Kilns tomorrow. Stained glass, a beautiful picture created by many fragments. And I think that relates to Warren really well. All we have on him are fragments, pieces of his childhood in Ireland, his education at Malvern, his training at Sandhurst (where I will be going in a few days), and even his later life with Jack. He himself is fragmented. His mother died when he was young, he was sent off to a difficult boarding school, he suffered from alcoholism…that doesn’t paint a very good picture, but I’ve started to realize that I don’t necessarily have to paint Warren as someone who is perfect. Yes, I’d love for him to have a better legacy than the one he has had, but even if you took a look at Jack, you find someone who suffered some very similar traumas and made some poor choices, but is still seen as a human being. Thus, I feel Warren should be given the same opportunity. To live. To exist. Maybe he’s fragmented, maybe he isn’t perfect, but he’s human. He has good and bad parts of himself, and a lot of that hasn’t been allowed to flourish.

Ah, big tangent. Mrs. Bremble’s tour, as the others, have definitely been helpful is formulating my project. The historical context is great and the opportunity to see these places is incredible. I was the only one, actually, who went on the tour. Dad walked around Oxford on his own self-led tour, snapping photos and taking video. And just as I finished the tour, the dam burst forth. I stood in the doorway of a hotel for a while, waiting for Dad, who got drenched pretty badly, the poor guy. I eventually tried to find a bus stop, and that’s when Dad found me. Fortunately, we caught a bus back to the station quickly.

Tomorrow, we stop at the Kilns, where Jack and Warren lived as adults. Like Oxford, this will help more with an end to the story I’m crafting around Warren, showing him as an adult and perhaps giving a glimpse into the effect of his childhood. So far, my other tours have been really helpful, so I’m excited to see where this one leads.