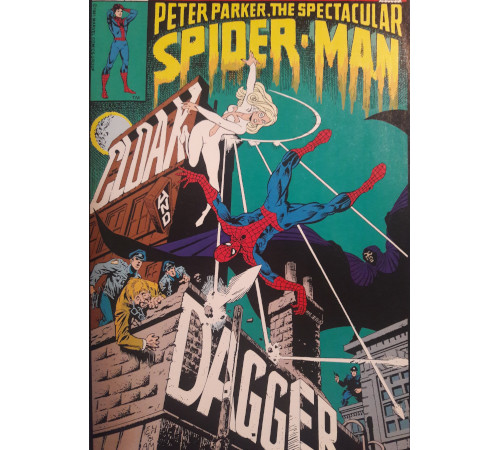 As I mentioned in my introductory post, the original Spectacular Spider-Man series (stylized as Peter Parker, the Spectacular Spider-Man until its 134th issue) is a title I have unfortunately left largely unexplored. Here and there, I’ve cobbled together an assortment of stories, either standalone issues or arcs, or pieces of larger stories that incorporate various series, but for the most part, a massive, yawning, black hole exists in my collection. While Spectacular is certainly a series I would love to be able to collect more of, until the day comes when I can economically purchase significant quantities of those issues, I will be reading and reviewing for this blog only the stories I own.

The 64th issue of PPSSM is a strange place to begin this hopefully long-running series of blogs, but it is where my collection dictates we start our chronological overview of Spidey’s world. In other words, it’s the earliest physical issue I own. At this point in time, Peter Parker has been the tights-suited Web-Spinner for a few years and has undergone a series of (mis)adventures, battling insane arch-enemies and foiling supervillain shenanigans. He’s graduated from both high school and college (though only after making up a missing gym credit), lost the love of his life, Gwen Stacy, to the sinister Green Goblin, and been hounded and lambasted more times than he can count by that bastion of truth and justice, The Daily Bugle.

I’m unaware of the exact circumstances surrounding Peter’s life coming into this issue, as I’m largely oblivious to the happenings in the PPSSM issues prior to this one. The one specific aspect I am aware of is that, when this issue was published, Peter was attending graduate school. Hopefully, some gaps will be filled in as we go on; fortunately, when we reach a point where stories begin to follow each other more sequentially, smaller leaps in time between individual issues and stories will make the Spider-Man timeline more sensible and easier to follow. 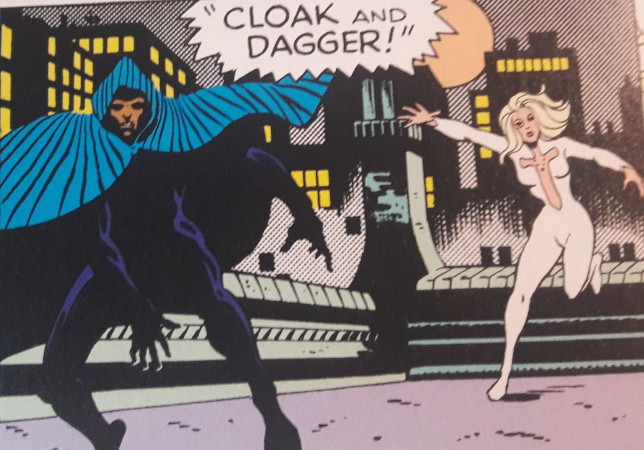 Cloak and Dagger are two characters I’ve gathered a recent interest in comics-wise. I have yet to watch their two-season television show, even though it sounds surprisingly close to the comics from the brief information I’ve read about it; until such time as I sit down and watch their small screen adventures, I’ll settle for working through a handful of series they appeared in during the late 80s/early 90s. When I first read these stories about a year ago, I was fairly critical, but I’m hoping with a re-read, I’ll understand and appreciate those stories better. Similar to supporting characters such as Venom, Cloak and Dagger will eventually leave behind their Spidey-related beginnings and forge on ahead down their own path.

In this first appearance, however, the duo is firmly associated with Spidey’s part of the comics universe. Introduced as vigilantes, the light knife-wielding Dagger and the shrouded-in-shadow Cloak are presented in a grimmer light by writer Bill Mantlo than they’ll later be depicted. Dagger murders a man with one of her knives and causes Spidey intense pain that numbs and chills him to the bone; Spidey himself remarks that, if it weren’t for his spider-strength, he’d be dead. Cloak, though he doesn’t directly murder anyone here, disorients Spidey for a while by engulfing him in his flowing cape of darkness and later uses his shadows to trick several mobsters into careening out a fifth story window, plummeting to their deaths. It’s clear from this issue that Cloak and Dagger carry out their vigilantism closer to how the Punisher would rather than following in the less lethal footsteps of a character such as Batman. 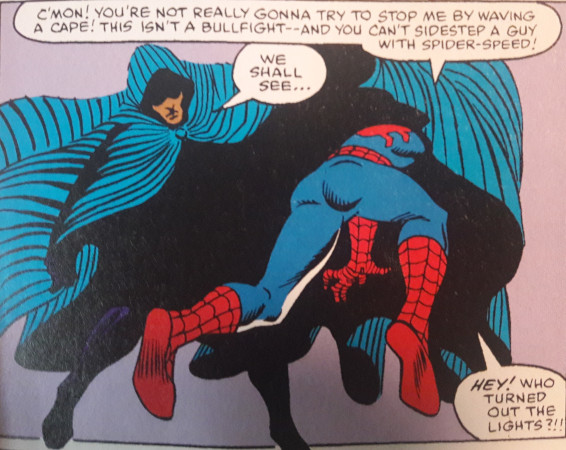 The most entertaining aspect of re-reading this issue was applying knowledge about the pair that I’d gleaned from later stories and series. In PPSM #64, virtually nothing about Cloak and Dagger is revealed, save their origin. Two runaway teens, taken captive by the mob and injected with an experimental drug the mobsters hope to flood the streets with, react differently to the dosage than any poor kid before them. Where every other adolescent subject has been killed by the drug, these two survived, as “something in [their] body chemistry made [them] different from the others,” and when this biological “difference” interacted with the drug, they gained powers instead of death. And that’s all we’re given by Mantlo.

The sparse introductory details work really nicely to give you a sense of who these new characters are, the baggage they carry, and the mission they strive to accomplish without oversaturating the story with their origins. These are kids we’re talking about, high school age at most, but kids imbued with fantastic abilities who are lashing out at the men who took away their innocence and childhood. The comparisons to Spidey’s own origin, though not touched upon by Mantlo, shouldn’t be overlooked, especially in a scene where the arachnid barges in on the pair assaulting the mobsters after overhearing Cloak and Dagger explain how they received their powers. As a hero who once hunted down the criminal who murdered his beloved uncle, Spidey is able to fully understand their motives--avenging the other children who were less fortunate when given the drug--even if he wishes they tempered their murderous actions. 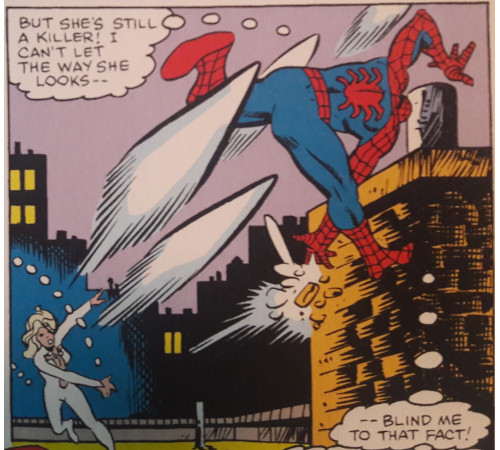 Cloak and Dagger’s origins and abilities will change over the course of their own various series, offering a deeper and more bizarre explanation of who they were before the drugs and who they’ve become after their abilities manifested. Their internal characterization will change as well, a reshuffling of personalities drastically different from the individuals we’re introduced to in this issue. Mantlo will give them real identities and real backgrounds beyond the “nameless teens who are subjected to drugs” elements introduced here and will transform them from merciless murderous into more sensible vigilantes. This means you do get the sense from this issue that, while Mantlo was careful in crafting a general background for these two characters and tried his best at making you empathize with Cloak and Dagger, the specifics were either not fully ingrained in his imagination or intentionally left out for future reference. Considering how the explanation for their origins fluctuates throughout future stories, I’d imagine Mantlo had yet to come up with a more specific history for the pair. 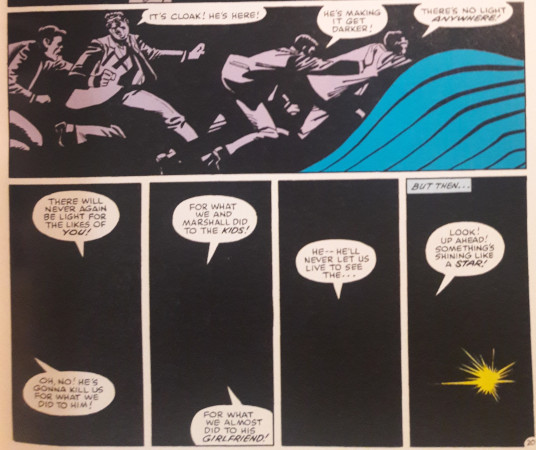 Yet even in this initial appearance, Mantlo plants sparse seeds to highlight one key characteristic that will serve as a mainstay throughout their future appearances: Cloak’s protectiveness of Dagger. At the moment, the relationship between the two is not well-defined; during their first battle against Spidey and when they accost the mobsters later on, Cloak and Dagger work mostly as a unit. They have the same mission, the same mindset, and the same manner in which they wish to dispel justice. Their individual motives and feelings are mostly set aside. But when Dagger is taken captive by one of the mobsters, Cloak extends the stygian darkness of his cape across the inside of an entire warehouse to confound the crooks, eventually herding them to their doom and saving Dagger’s life. Reading this issue for the first time, you’re left scratching your head slightly: is this just a friendship? A brotherly/sisterly relationship? Is it romantic? Mantlo doesn’t make it clear, but he at least gives you the understanding that they’re a team and pledged to each other in one way or another.

Mantlo’s later writings will position Cloak and Dagger at the epicenter of teen runaway issues and the lifestyles and drugs which he believes negatively pervade the lives of those adolescents who have fled from home. These problems will fuel several stories and series to come, becoming a heavy cornerstone on which the entirety of Cloak and Dagger’s existence rests. As loaded with flagrant attempts at driving home a societal message as those tales will be, I was nicely surprised to discover this issue contains none of Mantlo’s future heavy-handedness. The only section of this issue which sounds remotely “preachy” comes during a scene where Spidey sneaks into Ellis Island, where the drug-abused kids were imprisoned and where Cloak and Dagger are confronting their torturers. Mantlo takes a moment for Spidey to reflect upon what Ellis Island was in the days of immigration--a place fraught with as much fear as it was filled with hope. Ellis Island represented the gateway into America...but only if you passed the doctors and their tests, Mantlo says. The connection between history and Cloak and Dagger doesn’t require Mantlo to spell it out: the island that once represented a passageway into the New World has become a den of vipers in the present, where the only doctors administer poison to children looking for a better life. 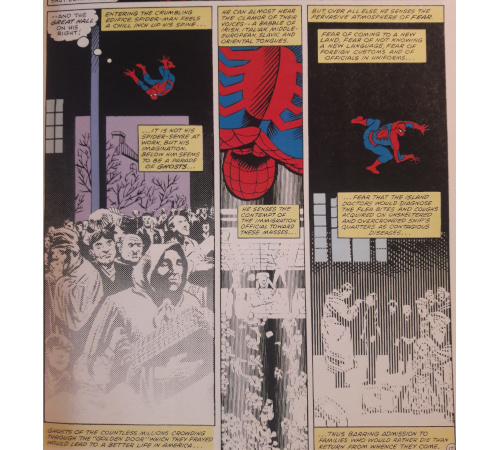 Admittedly, through all this, Spidey takes a bit of a backseat in favor of Mantlo fleshing out his new characters. The hero confronts the pair, serving as a “guinea pig” of sorts when they use their powers against him, and even aids the duo later in the issue. But that’s about as far as Spidey’s role extends. Even Peter Parker gets minimal “screen time,” appearing only for a brief discussion with Daily Bugle reporter Ben Urich that leads Peter, as Spidey, to Ellis Island. For our first dive into the Spidey pool, we’re treading some shallow waters, but I promise more Spidey as we go along.

Peter Parker, the Spectacular Spider-Man #64 isn’t a great or terrible place to begin our venture into Spidey’s universe. It’s not an overly remarkable or memorable issue by any means, save for the introduction of Cloak and Dagger to the Marvel Universe, but it’s an entertaining read nonetheless. Admittedly, this is a story that benefits greatly by understanding the duo’s further adventures, in other Spidey comics and through their own standalone series. As we explore Cloak and Dagger’s future in additional issues of PPSSM and their own titles, I hope to grow in fondness towards these two and hopefully be proven wrong about some of the original hang-ups I felt towards the stories Mantlo and others crafted for these teenage superheroes.