Spider-view: “Nothing Can Stop the Juggernaut” 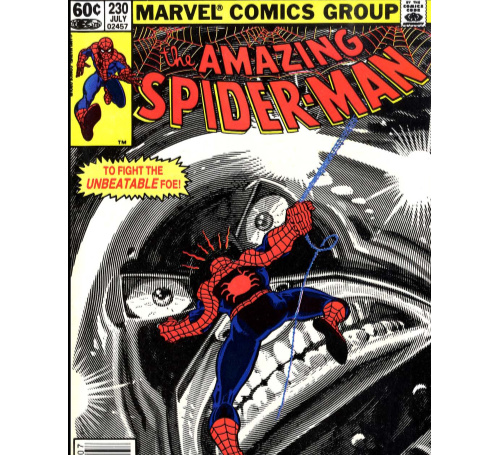 I was born in 1994, in the heart of the desolate “Clone Saga” years, when classic Spider-Man stories such as Peter David’s “The Death of Jean DeWolff,” J.M. DeMatteis’ “Kraven’s Last Hunt,” and Roger Stern’s “Nothing Can Stop the Juggernaut” had already been around for a while and garnered a heaping of praise. I feel strange, then, reading some of these stories, my perception already affected by their legacies even before I dive into them. I always enter the experience of reading these classic tales with a grain of salt, wondering whether these famed issues have stood the test of time because they’re really good or if because their initial readers, as they grew older, perpetually defended them as childhood favorites.

I’ve found myself on both sides of the fence. On the one hand, I myself have undoubtedly defended stories that I read when I was younger, despite what their actual merit may be or despite the fact that I haven’t read them in a long time and might view them through a more analytical lens nowadays. On the other, I've also been able to agree with fandom at large that certain stories are good because they're actually well-told, as opposed to being buoyed by nostalgia. Certain, classic Spider-Man comics don’t appeal to me as much as other stories, simply because I don’t have that long-standing appreciation for them or that tangible "I found this in a comic shop when it was brand new" anecdote to share. But there are those stories that sneak in there, truly standing the test of time and barging their way through my critical defenses. Some of the aforementioned stories may meet high praise in future installments of this blog. You’ll just have to read on.

So where does Roger Stern’s beloved classic stand in my mind? Does it bowl me over with the force of the Juggernaut? Or does it pry away like a flimsy strand of web torn by an armored, red behemoth?

“Nothing Can Stop the Juggernaut” 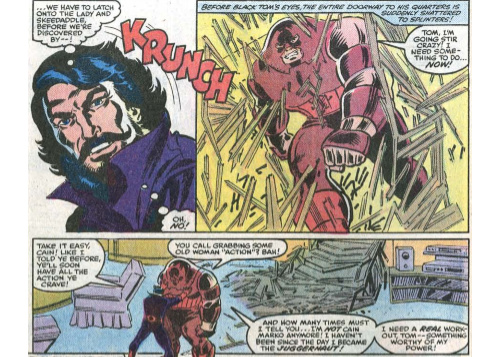 I had completely forgotten John Romita Jr. illustrated this two-parter when I picked it up recently. One of my (if not my absolute) favorite artists in comics, JRJR (as he often stylizes his name on issue covers) is a creator synonymous with Spider-Man in my opinion. Both him and his father, John Romita, defined the character for a generation--the latter with his run on Amazing Spider-Man alongside Stan Lee in the 1960s, the former with his time on the same title with writer J. Michael Straczynski in the early 2000s.

Romita Jr.’s trademark style is nowhere to be seen here; the squared faces and recognizable, almost rectangular eyes that mark his work today are a thing of the future in 1982. Here, we get a nice, safe representation of traditional-looking comic art that apes other artists of the time. It’s not distracting, and I can’t say I’m disappointed. I actually enjoy seeing Romita Jr.’s early days, knowing the artist he eventually grows into and how his style has adapted itself over the years. On certain pages, details feel a little rushed, and again, the art looks almost indistinguishable from other artists of the day, but overall, his work isn’t bad. I’m not going to say it’s fantastic, but that’s simply born out of a distinct interest in 21st century art over work from the previous century.

Roger Stern crafts an exceptionally well-written tale that sees Spidey going after the Juggernaut as he plows his way through Manhattan. Facing his foe at the behest of Madame Web--a psychic old woman who has a premonition of her impending doom at the hands of the Juggernaut, sent by his friend Black Tom Cassidy--Spidey finds himself against an enemy that can’t be beaten. As this is Spidey’s first time facing the big behemoth, he isn’t sure of who this guy is initially. At first, Spidey thinks Juggernaut’s trail of destruction has been caused by a vengeful Prince Namor or a rampaging Hulk, nice nods to larger Marvel continuity by Stern that made me smile, knowing just how wrong Spidey was. A good touch of dramatic irony on Stern's part. The story’s first issue is simplistic in nature, as Spidey is just trying to keep this walking tank from reaching a specific destination, but this first part is dramatic in its telling and leads into a second, even more powerful issue that sees the roles reversed: enraged by the massive madman’s single-minded mission at snatching Madame Web, Spidey hunts the Juggernaut. 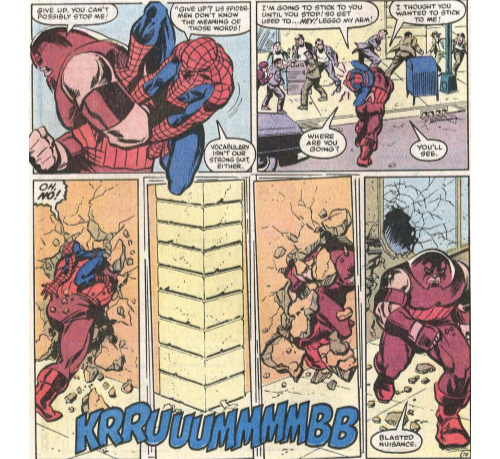 Spidey’s attempts at stopping the Juggernaut are varied and valiant, and Stern uses each surge of effort to display Peter’s fortitude and inability to quit when the chips are down. When his webbing fails to constrain the barreling supervillain, Spidey tries to rip out the road in front of him; when this hardly hampers the Juggernaut’s forward momentum, the arachnid tackles the lug and tries unsuccessfully to beat the snot out of him. Spidey thinks of almost everything, from indirect methods like trying to contact Doctor Strange and the Avengers, to forcefully pummeling the Juggernaut, using his webs as a barrier, and even electrocuting the big guy. The tension surges wonderfully, with each of the Juggernaut’s mighty footfalls a ticking time bomb, winding down incrementally as he methodically moves towards his final destination.

I said “almost” everything before, because I wondered why Spidey doesn't try to rescue Madame Web more directly. Get her away from her apartment, something like that. I assume it’s because she’s hooked up to an elaborate, web-shaped life support machine in order to, y’know, live...and pulling her off and getting her hooked up elsewhere is too risky and transporting the entire contraption would be too time-consuming and impractical. So staring down the barrel of the Juggernaut it is! 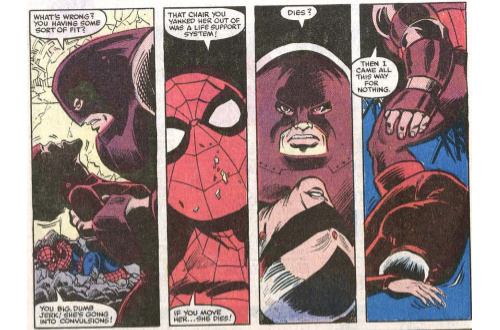 In both chapters of this story, whether Spidey’s trying to keep the Juggernaut from reaching Madame Web or putting the hurt on the villain once he flees the premises, our hero is at his fighting best. Spider-Man embodies responsibility, he embodies hope and a “never say die” attitude that doesn’t know when to quit. This can be said about most heroes, generally, but Spidey is one of the few who live that ideal out. He’s facing down this mountain of a man in these issues and does whatever he can to bring the Juggernaut down--hurling girders at his head, launching a wrecking ball at him, ramming a gasoline truck into the unstoppable powerhouse at top speed.

The truck sequence, in particular, becomes a powerful image and is my favorite series of panels in the whole story. Heck, I'd go so far as to say it's one of the best scenes in a Spider-Man comic. As the truck bears down on him, the Juggernaut all but shrugs off the impending blow even before it happens. “This won’t hurt me,” he snarls. Romita Jr. zooms in on his eyes as the Juggernaut huffs: “Nothing can.” The villain’s statement is punctuated by the exploding truck as it piledrives into him, a panel taking up two-thirds of the page depicting the fiery doom rained down upon the Juggernaut’s head. Even Spider-Man, barely able to escape the blaze without being singed, looks on in horror, asking himself what he’s done...and bemoaning his fate when the Juggernaut stomps out of the inferno, unharmed and raging. 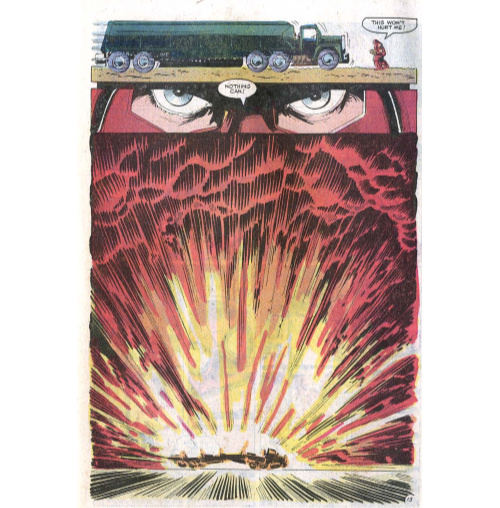 Stern pushes Spider-Man to the edge in this chapter, perhaps even clouding the hero’s judgement a little as he aims the truck at the Juggernaut like the world’s biggest bullet. This is a Spidey who’s rarely been pushed to the brink like this and has to think through all manner of attacks to stop the supervillain. Not only does this enable Romita Jr. to craft some entertaining sequences, such as the truck explosion, but it also shows a slighter deeper, perhaps darker side of Spidey. Our valiant hero has taken slight leave of his senses when pushed by an unusually confounding foe--take a look at “The Death of Jean DeWolff,” the J. Michael Straczynski-penned “Back in Black,” or even the original “Master Planner Saga” for wonderful examples of times when Spidey resorted to emotion over logic. Spidey’s powers are immense, and when faced with ordinary crooks and criminals, it doesn’t take long for the Web-Slinger to realize he needs to power down a little to keep from mashing his enemies into paste. Against a more overwhelming foe like the Juggernaut, Spidey can go to town, do whatever he feels necessary to stop this crimson giant’s rampage. As the truck explodes, Spidey’s response is horror (“What have I done?) as he realizes that perhaps he’s gone too far. His terror is compounded when he sees that the Juggernaut has escaped without so much as a sunburn.

As should come as no surprise, Spidey eventually succeeds over the Juggernaut, by using a surprising method that I won’t spoil here. All I’ll say is that it doesn’t involve fists. As a reader, I felt genuine satisfaction with Spidey’s victory, and this sensation was heightened by a series of panels at the issue’s very end that sees Black Tom Cassidy waiting hours for the Juggernaut’s return. But his friend doesn’t show, and by the way Stern crafts Tom’s thoughts, you get to watch as the X-Men enemy goes from certainty that Juggernaut will return to doubt as he starts wondering if something, or someone, actually stopped the Juggernaut. To have a villain even hesitantly start to agree that, just maybe, his big buddy wasn’t an invulnerable or unstoppable as everyone believes just adds insult to injury to the Juggernaut. 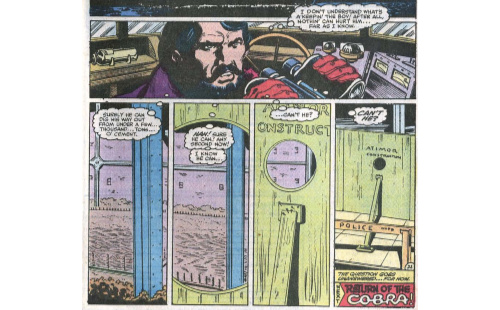 Spidey’s victory over the Juggernaut is one of his most remarkable wins; you can place it right up there with other classic triumphs including his stunning escape from Doc Ock’s underwater base in “If This By My Destiny…,” clawing his way out of a grave after being buried alive in “Kraven’s Last Hunt,” beating the stuffing out of Galactus' former herald Firelord in “The Hero and the Holocaust,” and figuring out how to defeat the vampiric Morlun during J. Michael Straczynski’s run. What all these tales have in common is how they showcase Spidey’s unrelenting perseverance in the face of overwhelming odds. Spidey’s no quitter when it comes to taking on fights and foes far larger than himself. He dives in headfirst.

“Nothing Can Stop the Juggernaut” fails to live up to its title. Funnily, where most stories would be critiqued for failing to exemplify their title well enough, Stern’s two-parter is uplifted by the contrast. As Spidey shows by story's end, something really can make even this giant topple, proving that, armed with webbing and a sharp mind instead of a sling and a handful of stones, Spidey is the David to the Juggernaut’s Goliath.