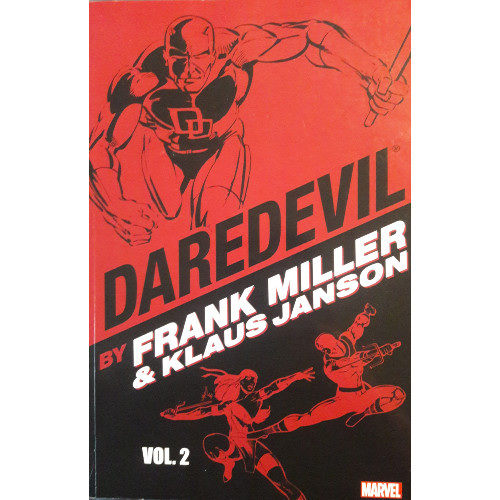 Frank Miller’s time on Daredevil has gotten off to a strong start: the writer/artist has already debuted one of his famed contributions to the mythos in the form of dead assassin Elektra; Bullseye is separating himself from the crowd of DD evildoers and becoming a formidable foe; and the Kingpin has transition from retired Spider-Man villain to devious crime lord who has put Daredevil in his crosshairs (and, alternately, been scoped out himself by the scarlet protector of Hell’s Kitchen). Miller’s start is strong, proving himself to be very capable at creating engaging narratives with intriguing characters.

As we head into the second volume collecting his run, we’ll notice how Miller takes the strands he’s integrated so far and really knits them together, his fingers flying as fast as a grandmotherly ninja weaving a mask. 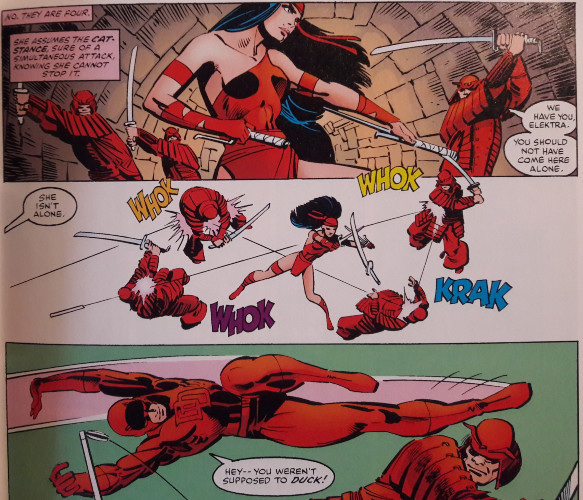 Assassin Elektra takes center stage as Miller propels her narrative forward. As I mentioned in my previous post, I’ve never taken a huge liking to the character. She’s always just been a part of the Daredevil mythos in my mind, an important aspect that keeps returning simply because she’s played such a large role initially. I’ve developed a sort of “Oh, look, it’s Elektra...again!” kind of mentality towards the character whenever she appears in comics; not that writers can't do anything interesting with her, but she comes across a little one note.

Even Miller seems to struggle with the best way to handle her. He introduces the Hand, a legendary, secret cult of (non-teenage or mutant) ninja (non-turtle) warriors who slip through the shadows and pick off foes from the darkness. Elektra, as he reveals, was a former member of the crew and gets on their bad side in this volume. His stories aren’t supercharged with empathy towards Elektra, but he casts her in a somewhat different light than she was initially perceived. I wouldn’t call her a “killer with a heart of gold,” but Miller seems intent on letting his audience try and care for her. Unfortunately, he traipses along a bit too carefully, never defining if Elektra is an out-and-out assassin or if there’s more underneath a stone cold killer facade. Is Daredevil her enemy? Her ally? A jilted former boyfriend? Does he have a future with her? Miller attempts to cram these pieces in, never finding a sweet spot where they all join fluidly. 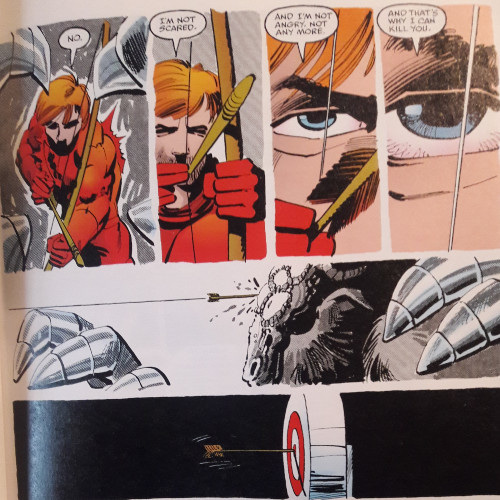 Similarly, the “ninja warrior” pieces feel a tad off at moments too. Miller also introduces Stick, a former mentor of Matt Murdock’s, who returns to pull Matt into a war between the Hand and Stick’s group, the Chaste. Pieces of this centuries-old conflict flit about in various stories (and will be a bit stronger in the third volume) but still don’t congeal enough here. Most of Miller’s martial arts sequences feel like a ploy to adapt an era where such tropes may have been popular; Miller never fully manages to make Daredevil feel comfortable in a world where ninjas who are stabbed through can be fully healed.

Miller’s Elektra arc culminates with, arguably, his most impactful moment on the entire book--her death at the hands of Bullseye. The moment has been lauded by fans for years and has influenced her character and Daredevil’s much in the same way Gwen Stacy’s death impacted Spider-Man. The second season of Netflix’s Daredevil show utilized Elektra's demise, as well as the ill-fated Daredevil movie with Ben Affleck. I tend to approach pop cultures highlights such as these with a grain of salt, not necessarily out of arrogance, but of curiosity. Since a moment like Elektra’s death has become so ingrained in the popular conscience, I feel like it’s emotional impact has been robbed by the sheer numbers of times I’ve heard about it (or seen it through on-screen iterations) prior to reading Miller’s run. Thus, a moment intended to be the highlight of his time on the book feels more hollow than it should. I understand the pop culture importance of Elektra’s death, but part of me wishes I had read these tales prior to knowing how deeply influential such a moment has been. 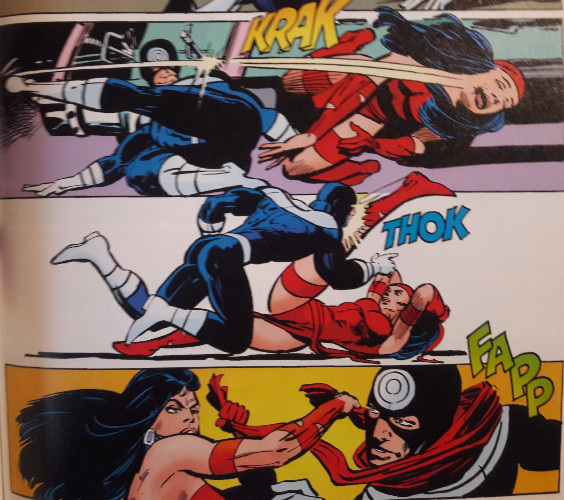 Miller brings much-needed comfort when he focuses on street-level (or, in one instance, below street-level) stories. This is where his writing prowess kicks in. A minor conflict between Daredevil and the Heroes for Hire, Luke Cage and Iron Fist, feels more fluid than people fighting ninjas. A lingering subplot focusing on the Kingpin’s wife Vanessa--a holdover from the previous volume--makes for interesting reading, even if the latter half gets slightly goofy; but even that story is wrapped around political corruption and the Kingpin’s growing influence. Urban warfare rages as Daredevil battles Bullseye and the Punisher. These duels allow Miller to really hone in on some nice, action-packed sequences that feel much more at home than other story elements.

The Punisher story arc, in particular, is a nice break from mysticism. Miller’s story, as far as I know, indicates the first time Daredevil and Frank Castle ever crossed bloody paths. Similar to Elektra, the long-standing Daredevil/Punisher rivalry has become somewhat of a fixture since Miller’s time, and if it weren’t for the fact that Miller is unpacking the first seeds of their enmity, I wouldn’t have been as interested. But seeing these two opposites duke it out for the first time is a rewarding experience, especially as they’re sizing each other up and sussing each other out. 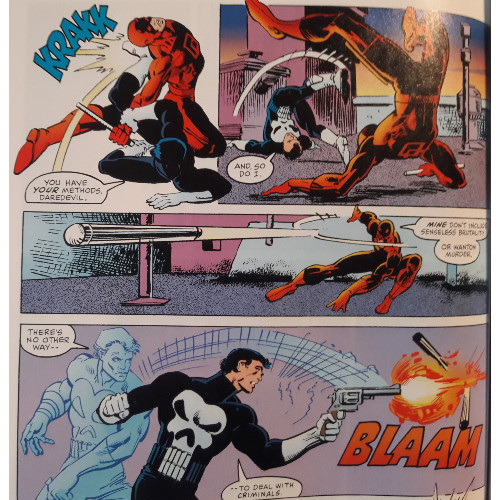 Miller even brings Matt Murdock into the picture and answers a question I wondered while I read: what makes the DD/Punisher rivalry any different from the Spidey/Punisher conflict? Both Daredevil and Spidey find the Punisher grating because he murders criminals, crossing lines that the red-garbed vigilantes would rather see him firmly behind. The difference, as Miller showcases, is in their human identities. Both Spidey and Peter Parker, I’d imagine, would want to see a criminal apprehended so the wheels of justice can properly spin. And while Daredevil wants the same, since Matt Murdock is a lawyer, he’s able to see those wheels spin further down the road than Spidey can...he can see the justice system working properly from start to finish (and, occasionally, aid it). Peter Parker has little stake in a random mob boss getting busted; Matt Murdock, either as a lawyer or from a lawyer’s perspective, sees the issue through a different lens.

Supporting cast members also make their mark on Miller’s stories, especially Ben Urich as the veteran reporter finds himself embroiled in the Kingpin’s business and ends up threatened by Elektra. Ben’s stalwart faithfulness to printed truth and Matt make him a standout character in Miller’s stories and will shape how later writers, such as Brian Michael Bendis and Ed Brubaker, will use him. Melvin Potter, the villainous Gladiator, undergoes some decent character transformation as he continues struggling with his violent urges and personality. Matt’s friends also take the stage from time to time, and though some of Miller’s subplot choices are perhaps misplaced on occasion, they nevertheless provide the book with some engaging grounding, even as throwing stars whish overhead. 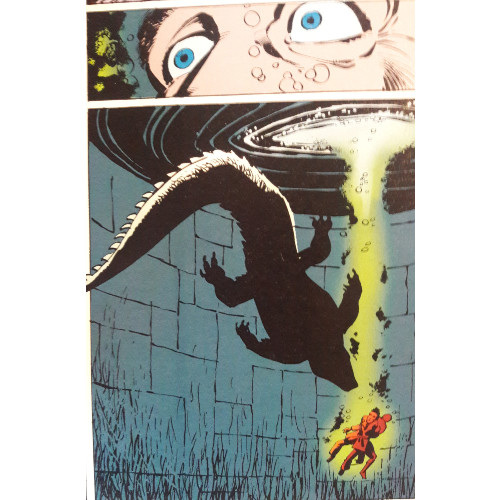 It’s difficult saying that this volume supersedes the first trade in quality; if anything, the last volume was hindered by some stories which Miller didn’t write. Having Miller serve as both writer and artist consistently helps maintain a certain level of quality and narrative cohesion. Yet Miller’s reliance on Elektra and mysticism, though integral to the Daredevil mythos, doesn’t sit as well with me as they should. The mystical elements feel a tad out of place, especially considering how interesting Miller’s street level narratives end up being. I understand he’s trying something different, injecting new flavors into the book, and I know how popular those pieces have been with fans. I’m not negating their historical importance. Subjectively, I just never became wholly comfortable with those additions. I much prefer seeing DD slug it out with Bullseye, stare down the Kingpin, or go toe-to-toe with Frank Castle, physically and morally. Fortunately, those moments grace this volume, pulling away from some of the lesser pieces and crafting stronger instances that I enjoy watching Matt Murock’s crimson alter ego wrestle through.