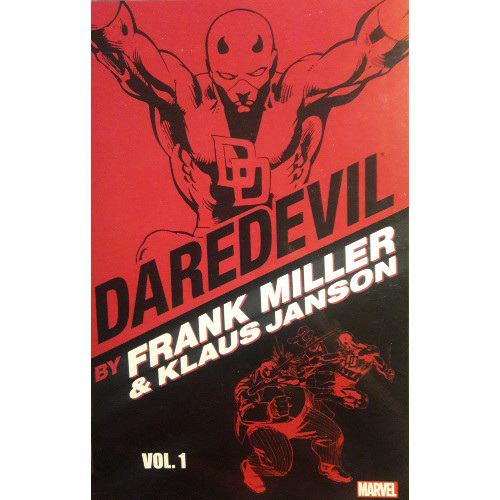 Recently, we looked at infamous Spidey story arc “The Death of Jean DeWolff,” which at one point, saw ol’ Web-Head duke it out with ol’ Horn-Head. Spidey and Daredevil have been buddies almost as long as they’ve each been around, with several confrontations and collaborations over the years. During the early 80s, Daredevil received what many fans consider his finest string of hits over the red-headed vigilante’s illustrious career: the run of Frank Miller. Spanning less than thirty issues as writer and artist (plus a few earlier issues as just penciler), Miller left an indelible impression on DD, a run that few have equaled on the character.

His time on Daredevil has been collected in various formats, but the “by Frank Miller and Klaus Janson” volumes are a particularly good way to collect Miller’s whole run (minus the “Born Again” story arc, which Miller returned to the book to do). I know a few omnibuses exist that capture the full breadth of Miller’s work, but I feel these smaller collections do a good job pulling together the issues I wanted to read. Over three blogs, published intermittently as I work through other (Stand)om Stories posts, we’ll examine each of them, detailing the significant contributions Miller made to DD’s corner of New York (Hell’s Kitchen, for the uninitiated). 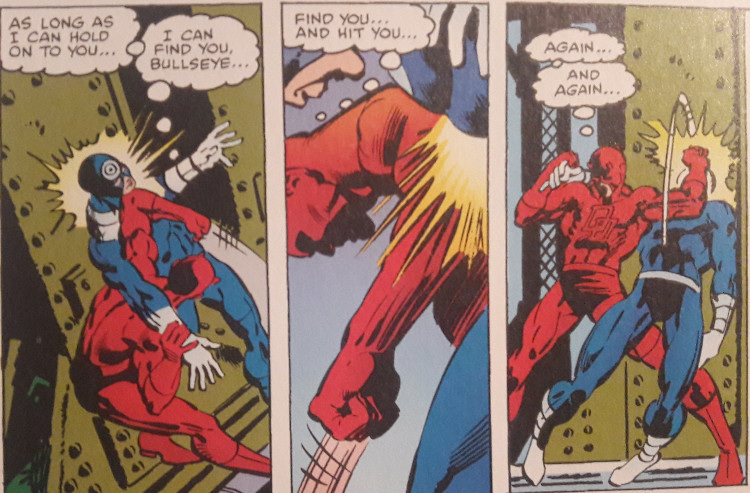 This first volume opens with a few stories that Miller simply illustrated, allowing the creator to cut his teeth on Daredevil. Heck, his first work isn’t even on the actual Daredevil comic, but a few issues of Spider-Man’s secondary series, Peter Parker, the Spectacular Spider-Man. These issues have an engaging premise--DD has to help out a newly-blinded Spidey (a temporary hurdle)--but do little else to cement them in the reader’s imagination. Miller’s first issues they may be, but there’s no reason to have them here otherwise. An interesting premise can’t disguise that these issues are smack dab in the middle of a larger arc that has nothing to actually do with Daredevil.

If you think we move onto “better things” once we actually reach the Daredevil issues, you’d be only partially right. Roger McKenzie may have written a few engaging backup stories over in Marvel Fanfare, but his work here is largely unimpressive. Villains like Death-Stalker and the Animen are dime-a-dozen baddies, and an issue featuring Doctor Octopus is not the villain’s best showing. 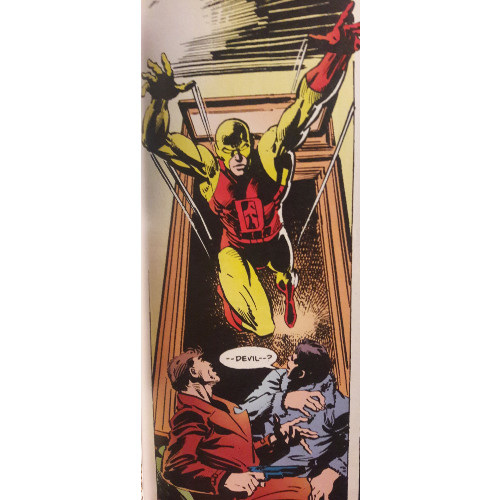 McKenzie kicks things up a notch as he nears the end of his run, fortunately. Two back-to-back issues--the first featuring an engaging Daredevil/Hulk yarn, the second detailing a wonderful retelling of DD’s origin--stand out as perhaps the height of McKenzie’s contributions to the book. Both issues, backed by Miller’s distinctive artwork, are a joy to read. Throughout his time with McKenzie, you can really tell that Miller is shaping himself, finding his legs, as it were. The origin issue specifically details several memorable panels as Miller ratchets up his skills.

But it’s when Miller takes over the title wholly, serving as both writer and artist, that Daredevil reaches the apex of fame. Under Miller, the title went monthly, selling well enough to earn such a pivotal scheduling change from its “every other month” publication. Miller’s art blends masterfully with his dialogue, and though early issues are a little stilted, Miller soon shows his prowess as a words-smith as well as an illustrator. 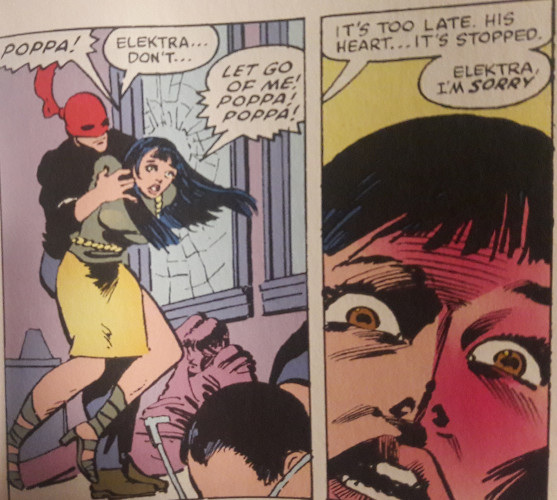 Right off the bat, Miller introduces his most famous creation to the Daredevil mythos: Elektra. Rich-girl-turned-assassin, Elektra is the first of several martial arts contributions Miller makes to the series, taking the simple grim and gritty noir feel of Daredevil and injecting a more colorful side. Elektra’s first appearance isn’t flawless; Miller, in fact, spends most of the issue covering previously unknown background information. Suddenly, the reader is asked to understand that the female assassin who just showed up in Hell’s Kitchen, which is protected by Daredevil, is also Matt Murdock’s long-lost college girlfriend. Coincidence is as coincidence does, but Miller unleashes the revelation at you with ferocity, cramming backstory into a handful of pages and simply asking you to accept it as fact. I get it, it’s his book, but it reads just a bit weird.

Better handled is Miller’s use of Bullseye and the Kingpin. Bullseye, used sporadically by McKenzie, achieves arch-enemy status over the course of Miller’s run. Here, the expert marksman and killer, goes from a mere nuisance to a full-fledged psycho. A series of panels where Bullseye mercilessly murders several New Yorkers who he mistakenly believes are all Daredevil is a standout sequence, offering quite a grim trip into the assassin’s fractured mind. Miller grooms the villain’s plots and plans, wonderfully balancing Bullseye's expertise with his manic attitude. Bullseye isn’t just a gunsel for hire here--oh, sure, he eventually works under the Kingpin’s broad thumb, but as Miller initially sculpts him, Bullseye just really hates Daredevil. There’s a “Green Goblin vs. Spider-Man” quality to the epic rivalry, as all Bullseye wants is vengeance on a man who’s plagued him so far. Until Bullseye enters the Kingpin’s employ, his vendetta against DD is simply personal, giving his character a surprising emotional charge.

With the Kingpin, Miller pulls out all the stops on a multi-issue story arc that wraps up the volume. In perhaps my favorite arc penned and illustrated by Miller, a retired Kingpin comes back to New York, brutally announcing his return after being persuaded to leave retirement. Miller establishes the Kingpin as a bona fide threat, showing not only his influence but also his surprising physical prowess as well. Wilson Fisk is firmly, definitively stolen from Spidey’s rogues gallery and brought into DD’s, and this opening arc establishes a villain/hero dynamic that has lasted ever since.

Elektra. Bullseye. Kingpin. Since Miller, all three characters have become synonymous with Daredevil to the point where I inwardly groaned when Season 2 of the hero’s Netflix show set up an Elektra arc. To me, Elektra in particular has always been there, always been a staple Daredevil fixture. She just is. The show, specifically, felt like it had to shoehorn the red-clad assassin in simply because of her importance to Matt Murdock. As such, I’ve never really been fond of her as a character. Yet, when reading Miller’s work, I found I was able to approach Elektra, and Bullseye and Kingpin subsequently, with less jaded eyes. What feels standard and almost cliche to me in 2021 wasn’t back in 1980. Miller’s use of all three characters was new and exciting, and you can see that newness on each page. 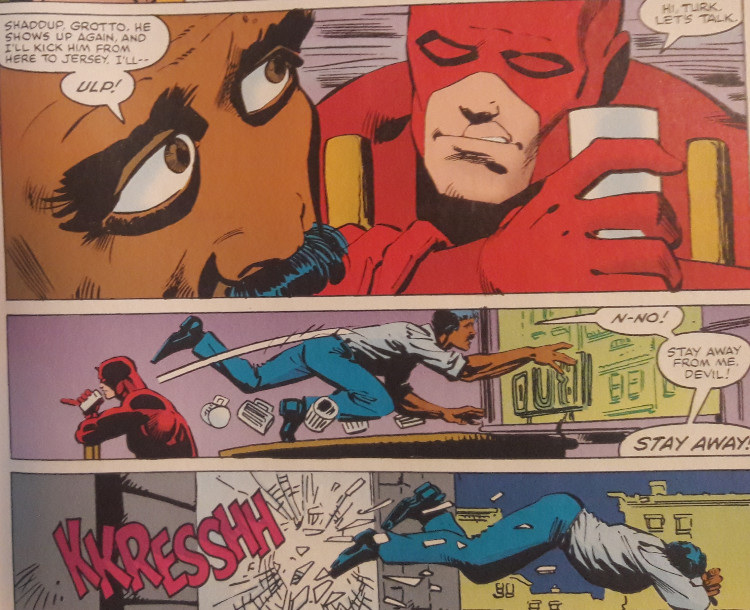 Additionally, another “new” element--if not to the title then at least to me--sporadically flashed onto the pages: humor. Miller establishes some surprisingly engaging running gags that spill over into the rest of his run. Turk, a down-on-his luck punk, keeps winding up on the wrong side of Daredevil, becoming a consistent punching bag and a wonderful little narrative throughline. Josie’s, a bar frequented by less-than-noble patrons, suffers several broken storefront windows. Details such as these, the little gags, make for a highly entertaining reading experience. They’re small anchors for the reader’s mind to latch onto, something to draw them in and remain familiar throughout the run.

Miller’s run is off to a bombastic start in this volume. The first half may be a bit of a slog, but that really has nothing to do with Miller himself. Writers Bill Mantlo, Roger McKenzie, and David Michelinie (who fills in for a single issue before Miller takes over writing duties) just cannot handle the material as well as Miller does. I know Frank Miller has become something of a controversial figure, but that shouldn’t discredit his earlier work. These opening arcs are up there as some of the best early-80s comics produced by Marvel, and it’s no wonder how quickly Miller was able to get the book into its monthly rotation. Here, at the start, you’re able to see Miller’s vision begin coming alive; this volume is a great gateway to not only the world of Daredevil, but a fantastic portal into Hell’s Kitchen as penned by a comics icon.