Spider-view: “The Death of Jean DeWolff”

Narratively and artistically, this classic Spidey story remains as strong and accessible today as it did in 1985 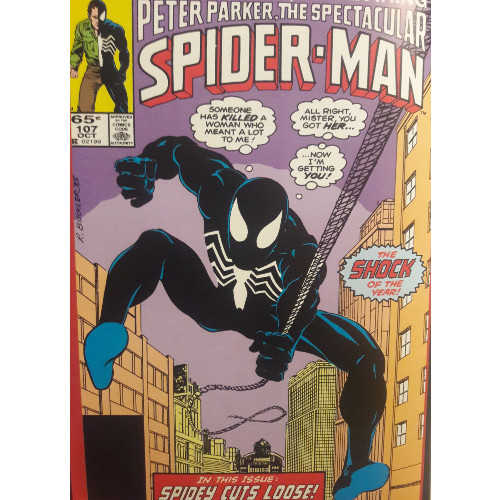 I really want to know what people thought when they first saw the cover for Peter Parker, the Spectacular Spider-Man #107. Black-suited (non-symbiotic version) Spidey swings towards the reader, fist clenched, thoughts racing through his head: Someone has killed a woman who meant a lot to me! How many readers, seeing this cover, instantly started listing the number of women in Peter’s life? Mary Jane Watson, Aunt May, Felicia Hardy/Black Cat, Betty Brant, Liz Allen…

Writer Peter David doesn’t take long to answer the question of who the victim is: Police Captain Jean DeWolff has been shot to death in her home. And, like a classic game of Clue, the murderer must be found.

All we know is this: it was the guy with the shotgun in the bedroom.

And he’s still out there.

“The Death of Jean DeWolff” 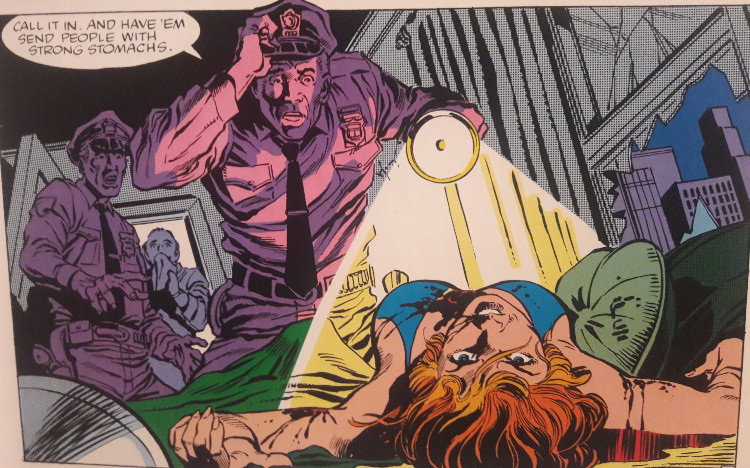 I have, sadly, never read much of PPSSM’s original run. I only own a handful of issues that make up either classic story arcs (“Death of Jean DeWolff,” “Kraven’s Last Hunt,” etc.) or serve as parts to larger story arcs (like our beloved “The Alien Costume Saga,” “Maximum Carnage,” several segments of “The Clone Saga”). Therefore, I cannot compare its quality of that of other stories in the series. I bought DoJDW because I’ve heard so much about it being a classic Spidey story and how it either tops or is listed near the top of so many fans’ “Favorite Spidey Stories” lists. That being said, I originally entered the tale with a slight grain of salt…would it really be as good, as classic, as impactful as readers keep on saying it is? Turned out, it was. With this second read, I instead asked myself if I would enjoy the story a second time around.

Turns out, I did.

Peter David’s writing alone is worth the price of admission. Let’s forget for a moment the story itself and focus on how David crafts the tale. Sure, he’s got several clunkers mixed in with his dialogue; near the start of the story, Spidey fights a couple of thugs who toss around your generic “He moves like he’s on strings!” lines that crooks use when they’re impressed by Spidey’s speed. But more often than not, David’s dialogue drives the story wonderfully. One panel in the first issue has a cop call Jean’s murderer a “godless sicko,” providing a seamless transition to the exterior of a cathedral, a place hopefully short on godlessness. Peter Parker, in a brief vocal altercation with Matt Murdock, asks the blind lawyer, “How can you face yourself in the mirror each morning?” The blind lawyer replies with “It’s a challenge.” Though Aunt May uses this as a teaching moment to chide Peter on his carelessness, the reader understands that, already, David is picturing something bigger through this minor conflict than a proverbial rap on the hand by Peter’s doting relative: he’s sowing the seeds of a later conflict between Daredevil and Spidey, founded in a minor moment of discord between their everyman alter egos.

“Moments.” It’s the best word to sum up Peter David’s work on this story. Entertaining as the tale itself is—and by no means is DoJDW short of wonderful scenes—the element that hooked me as I read it were these tiny pieces. A bit of amusing dialogue between characters, words and phrases serving as transitions from one scene to another, the way three out of four issues ends with the murderous Sin-Eater firing his shotgun at a potential victim. David, and by extension artist Rick Buckler, pays attention to the details, fitting the individual sections together to craft a beautiful whole. Buckler’s art expresses the beautiful realism necessary for this story. From character faces displaying emotions from shock to fear to anger, to close up details on the gun used by Sin-Eater to evoke a sense of terror towards a very real weapon, to the fluidity of the battles between Spidey and the villain, Buckley’s pencils create the perfect tone for the plot. Nothing looks cartoonish, nothing looks gimmicky or fake.

These elements, both verbal and artistic, are fantastically constructed upon a strong story: DoJDW isn’t so much the mystery you’d expect it to be, the race to deduce the identity of Jean’s murderer, insomuch as it is simply a sprint to bring a masked criminal to justice. Spidey’s biggest concern isn’t figuring out who the scum behind the Sin-Eater’s mask is; he just wants the guy found, he wants justice done. Naturally, this is the position we see Spidey in all time as he goes up against guys like the Hobgoblin and the Rhino, but David heightens the tension, interestingly, by having the Sin-Eater portrayed as just an unstable individual with a shotgun. The stakes aren’t necessarily based on the physical threat he poses to Spidey (though we’ll touch on that later), but the threat he poses to society. A normal guy with a gun, weaving his way from victim to victim. Even today, the image is a terrifying one and grips you because this is a villain who attacks people in their homes, in churches, on the street, evoking impressions of serial killers, terrorists, or other individuals who have inflicted very real harms on real people in our world. 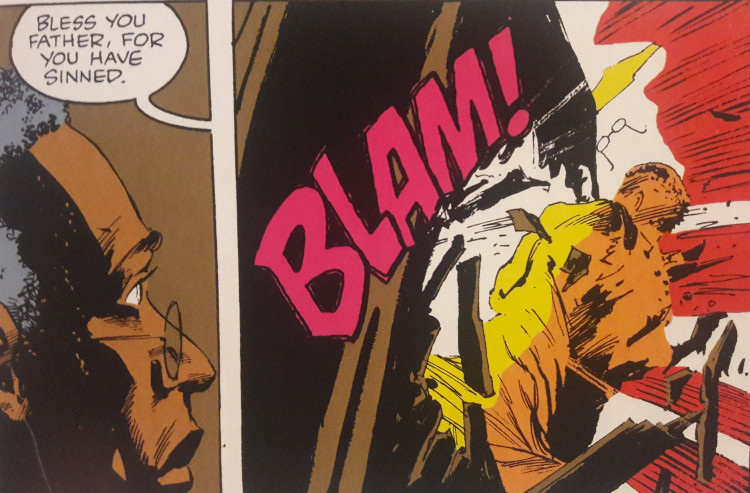 Who doesn’t want to see such a person brought to justice? Who doesn’t want to see such a man get his comeuppance? David very tangibly brings that concept of justice to the fore as Spidey battles the Sin-Eater a second time later in the story, almost beating the man to death before Daredevil intervenes. Though this allows David to introduce a very blunt philosophical argument between the heroes as they tussle (not that it’s a bad argument, it just feels a tad forced), my bigger takeaway is from the scene where Spidey nearly murders the Sin-Eater: this is a good, if not great, example of how you write a dark Spider-Man story.

At the core of every Spidey story is (or, at least, should be) the struggle between power and responsibility. I’ll assume you know the famous line already. Occasionally, you’ll get what I’d consider “bad” darker Spidey stories, wherein Spidey utterly forgoes the responsibility aspect and starts acting a little goofier. Check out his “I am the Spider!” phase during the 90s for an example of how “edgy Spider-Man” fails to work. When a writer tries to force “Dark, edgy Spider-Man” onto the reader, I feel like it doesn’t take. The writer is essentially going, “See? This is a NEW Spidey! A grittier, more realistic take on the guy! This is how things work from now on!” What David does in DoJDW is stronger. He gives us a dark, more violent Spider-Man, but simultaneously shows us that, actually, this Spidey is wrong. This isn’t how he’s supposed to act, this isn’t what he’s supposed to be. So instead of turning up your nose and going “This isn’t how my Spider-Man would act!” the reader feels sympathy for the character. You know the writer is acknowledging that, in this moment, Spidey’s making the wrong choice…you get a glimpse into who Spidey would be if he really cut loose, and you believe the writer will eventually right this overturning ship and bring the Spidey we know and love back to the surface. 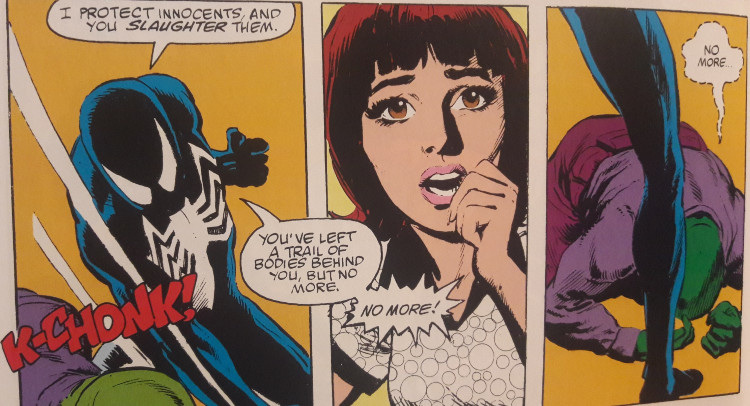 Which David does. Spidey has his moment of clarity and gets brought back from the edge. Yes, the argument that brings him to his senses is a little forced and feels a bit like pandering, but otherwise, it works fairly decently. Handled by a less skilled writer, the philosophizing would overshadow the message behind it—that Spidey’s being kind of an idiot here—and would probably end up beating the reader over the head with the idea of how dumb Spidey looks in the moment. Fortunately, under David’s pen, it doesn’t come across that way.

The story does, however, have a few minor hiccups. A tiny subplot where Spidey questions a crook about Sin-Eater’s whereabouts in a bar surrounded by other criminals feels ultimately pointless: the guy knows nothing, and since it’s only mentioned one other time by Daredevil, who disagrees with Spidey’s methods, it feels like a slightly cheap and unnecessary way to stoke the fire between them. Elsewhere, Spidey’s first encounter with the Sin-Eater goes surprisingly well in the murderer’s favor as he manages to give the hero several good thumps. Spidey reasons that seeing some bystanders get shot by the villain “freaked me out” and got his “reflexes all gummed” and that seeing Jean’s badge on the Sin-Eater’s belt distracts him long enough for the murderer to solidly clock him on the head. Though you later discover the Sin-Eater received some additional strength from a secret formula, this explanation feels like it was tacked on to explain how the Sin-Eater got the upper hand. Instead of going “Oh, so that's how he beat Spidey!” I kinda rolled my eyes. Admittedly, you wouldn’t want Spidey to have taken down the Sin-Eater so quickly or easily in their first fight, but that particular situational setup seems to have backed David into a corner where he had to resort to some coincidental events or past history to write himself out. It felt somewhat similar to David's story "Ace," which we examined last time; both tales featured characters who, almost miraculously, get the upper hand on Spidey when they absolutely shouldn't have. 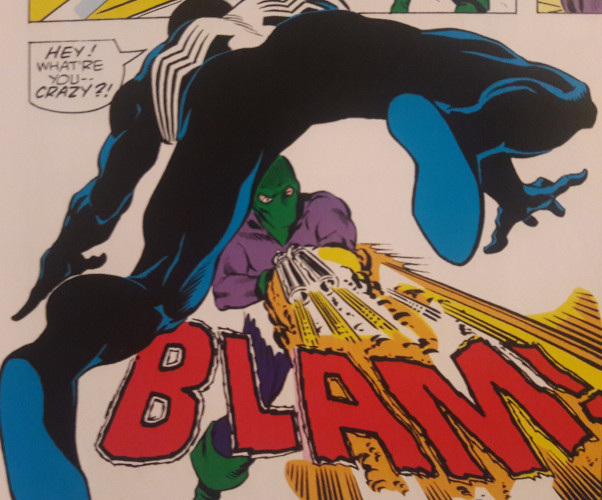 These small grievances aside, DoJDW really is a classic Spidey story. Reading it a second time only reinforced in my mind why fans have loved it for over thirty years. The blend of David’s dialogue with Buckler’s pencils creates a sense of realism that pervades the entire story, even if it stars a guy who slings himself across New York City on thin strands of webbing and can lift cars. For a story titled “The Death of Jean DeWolff,” it’s surprising to discover the beauty of the piece lies less in the death of Captain DeWolff and more in how our cast of characters reacts to it. Rage, grief, vengeance, and justice flit their way thematically across the pages in a dynamic display of raw emotion and storytelling that rings hollow in some of today’s stories. Together, David and Buckler make a story that deserves to stand the test of time, primarily because it hits readers emotionally even decades later as a visceral reminder of both the harsher and beautiful realities of the lives we lead. There can be pain and grief, and there can be mercy and justice. For a story to aptly balance the two is a rare feat, but an undeniably welcome one.