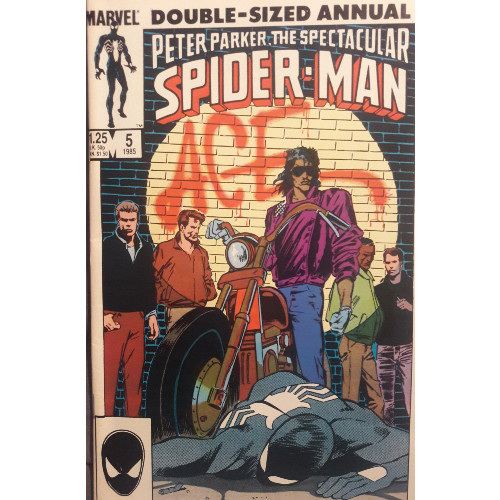 As we continue our trek through Spidey’s annuals, begun last issue, we move from Web of Spider-Man into Spectacular Spider-Man. Last time we examined this particular title, Al Milgrom had just torn the Spidey/Black Cat relationship asunder, ripped to shreds by secrets and the machinations of the Kingpin of Crime. This annual, published about half a year after Spidey’s break-up, does not feed into that story. We’re heading into new territory for our hero, and as I said last time, it may not have many connections to prior Spidey material.

Significantly, this issue features the Spider-view debut of Peter David, a comic book legend. Those in the know will easily associate David’s name with his iconic Incredible Hulk run or perhaps his affiliation with Spider-Man 2099 or X-Factor. At this point in our hero’s history, David’s only Spidey writing credit had been a story published in Spectacular Spider-Man #103 (June 1985), a mere five months before this narrative was released. In short, David is new to the game, and this issue showcases a unique blend of naivety and brilliance. 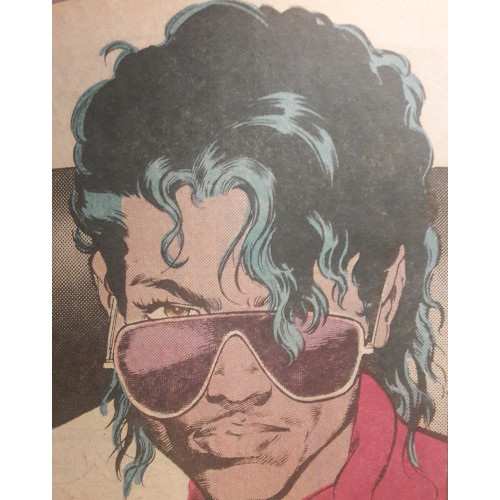 I described the last issue we examined, Web of Spider-Man Annual #1, as a “human interest” piece, one which shifts focus from the superhuman element to the human. These tales largely look at regular folk, peripheral characters, fleshing them out instead of honing in on the actions of the main protagonist. Hence this annual’s namesake, “Ace.” Ace is often described as a cross between pop stars Michael Jackson (note the gloves) and Prince (seen in his face, as mentioned by fans), but he's apparently based on Mark Bright, a comic and storyboard artist.

David interestingly weaves hints of Ace’s character throughout the entire issue--he’s an enigmatic, no-nonsense biker who once served in the military and used to lead a gang of street toughs. He’s turned his back on that lifestyle, mainly for the sake of his younger sister and mother, but still struggles with the ramifications of his darker past. Much of this is depicted well by David, who forsakes blatant exposition for wonderful visuals. Fittingly, one of Ace’s main characteristics is his hesitation to speak, meaning Mark Beachum carries the bulk of the responsibility in getting Ace’s character across. Certainly, Beachum’s art, though nicely detailed, was governed by David’s direction, giving us several non-verbal moments in which the pair offer good characterization for their protagonist. Ace speeds recklessly by several folks on his motorcycle; he fights like a tiger against Spidey later on; and in perhaps the issue’s single best moment, he comes crashing out a window on his bike in a hail of glass. 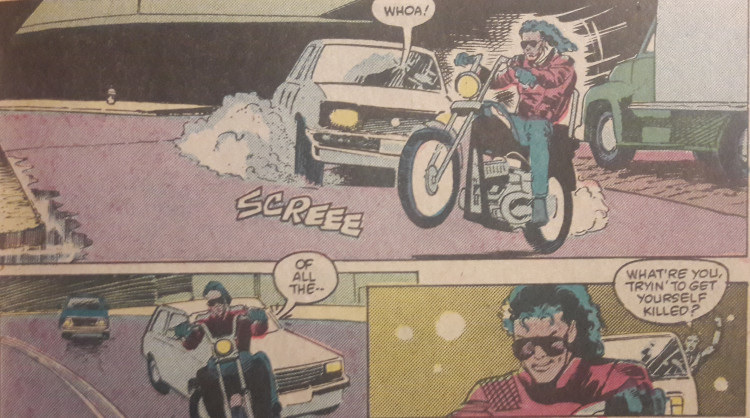 Contrast this with Ann Nocenti’s handling of Max in the last issue we looked over. Max was sympathetic to a fault, which worked with and against Nocenti. While Nocenti imbued Max with multiple interesting character traits, she forsook certain details and made the young prodigy’s story occasionally unbelievable. Ace is more believable and sympathetic for different reasons--though you saw Max’s pain through his words and actions, you’re forced to largely read Ace’s emotions in his face. What makes this difficult is that he’s decked out with dark shades, meaning Beachum has to work around his eyes to convey emotion. He does so deftly, making it clear what Ace is feeling every time the character’s on the page.

David’s script, though not lacking for words, forsakes verbs for pencils when necessary, a trick often used well in his later classic storyline, The Death of Jean DeWolff. It’s a nice trick for him to utilize, especially considering how verbose comic script writing can be. None of his scenes feels weighed down by unnecessary exposition or dramatic, fluffy emphasis. He allows Beachum the ability to create, to craft vivid emotion through his pencils. Considering this is only a standalone issue, the amount of presentation, if you will, packed into these pages is impressive. 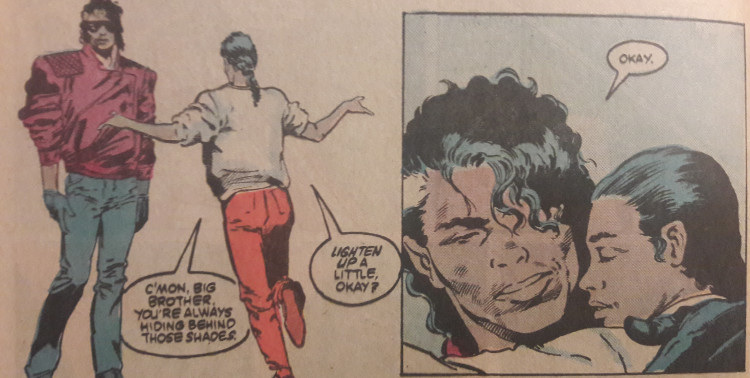 Where David stumbles in the creation of Ace’s backstory. As I mentioned with Nocenti’s Web of Spider-Man annual, Max’s backstory lacks certain details which I believe would have been interesting, if not integral, to the character. Basic questions go unanswered. Similarly, David sort of plops Ace into our story and doesn’t offer a lot of explanation. Ace’s current situation, certainly, is depicted nicely--we learn early on he’s caring for a younger sister and mother, hence why he left a lifestyle of violence. That aspect is admirably woven in by David; I’m not complaining about that at all. David, however, also inserts a mentor figure, a wheelchair-bound man who brought Ace from out of his gangster ways. This part feels rushed, as the character is kind of dropped into the middle of the narrative; while he serves as perhaps a mouthpiece for Ace, or is used to explain why Ace no longer seeks violence, his inclusion is sudden.

Additionally, David turns Ace into an intense fighter, capable of going toe-to-toe with Spider-Man. Little to no reason is offered for Ace’s fighting prowess, and while I’ve read it may be cleared up in PPSSM Annual #6 (which I’ll also be reviewing), I’d prefer not to look ahead to inform my opinion on a current story arc. I certainly understand the benefit of hindsight, and I also get the use of foreshadowing, but it doesn’t feel like David is doing that here. Ace’s ability to stand up to Spidey adds a distinct “cool” factor but that’s about it. I think I would have liked to see a reason for Ace’s ability referenced in this issue. 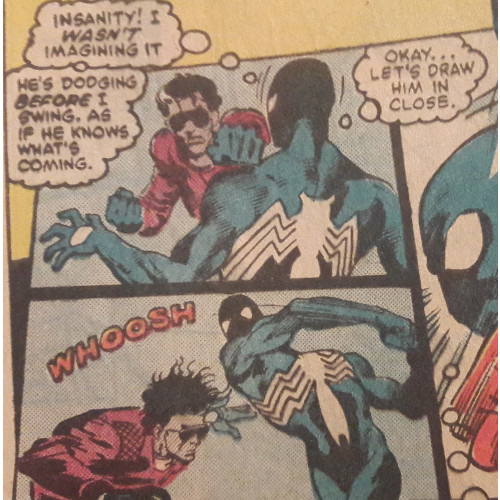 In some ways, Ace feels like a precursor to David’s Sin-Eater, the villain of “The Death of Jean DeWolff,” perhaps David’s best-known Spider-Man narrative. Since we’ll be looking at that tale in our very next post, I don’t wish to spoil much, but I’ll say this: that story also centers on a human antagonist capable of giving Spidey a good fight. In “The Death of Jean DeWolff,” David offers somewhat of a more plausible explanation for the Sin-Eater’s capabilities (which I’ll discuss more of in that post), making me wonder if the Sin-Eater could have been a course correction of sorts. Ace and Sin-Eater are wildly different, so I assume David wasn’t thinking of the one when he created the other, but small similarities exist between the men.

Speaking of Jean DeWolff, she plays a small role in this issue, which feels far more important in hindsight. Considering this annual and the PPSSM issue where she was murdered were published the same month, her inclusion here feels surprisingly poignant. She shows up nicely dressed, forgoing her trademark cap and outfit for a stylish dress. Spidey makes a quip about never seeing her in such casual wear, making a good point: it’s nice to see the typically tough-as-nails police captain out and about, able to enjoy herself. A date, perhaps? Nick Spencer, in a recent one-shot, would have you believe that DeWolff dated a fellow police officer shortly before her untimely demise; perhaps David, who himself references this relationship in a later story of his own, is implying DeWolff is seeing that certain cop? That’s just a hypothesis, but it forms a nice, unspoken connection between this annual and “The Death of Jean DeWolff.”

Even if it wasn't intentional, I’ll just say it was. It’s head canon now.

Peter David’s cutting his teeth on this story. As I said, it’s a good showcase for his early work, combining a glimmer of brilliance with a few rough patches. Ace certainly feels like a fully-realized character; unfortunately, it sometimes seems like he was more “fully-realized” in David’s head that he is on paper. The transition from imagination to tangible character isn’t wholly clear in this instance, even though Ace holds his own as an interesting character. We have Mark Beachum to thank for that, fortunately, for where David’s words don’t always hold up, Beachum’s pencils tell volumes. The story becomes an interesting blend of writing and artistry, and even though it isn’t always balanced, it’s a good forerunner to later, even better narratives that David would create. We’ll be looking at one of those in our very next post!