Spider-view: “Give Me a Hand, Future Max”

Ann Nocenti's standalone contribution is well-executed, even if some of the details get overshadowed by the narrative 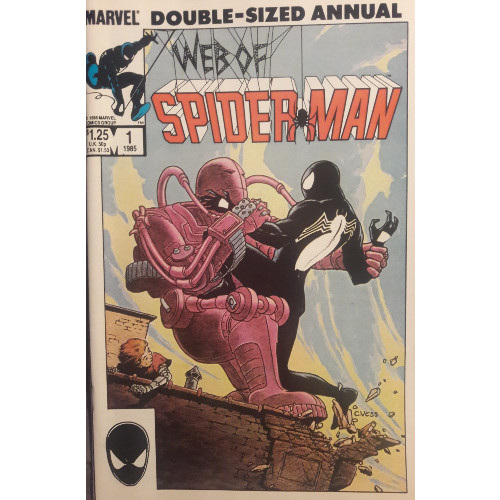 One area I have yet to focus on deeply with this blog are “annuals.” Produced once a year for certain titles, annuals tend to be larger and potentially grander than your typical monthly issue of a series. For example, Spidey’s very first annual (Amazing Spider-Man Annual #1) saw the hero tackle the infamous Sinister Six for the first time; highlighted by Steve Ditko’s glorious splash panels, the issue is larger in size and contains oodles of bonus features, including pinups and backup strips. It’s beautiful. As I’m sure I’ve indicated elsewhere, it’s my favorite Spidey issue of all time.

Looking ahead over various stories I’ve collected, I noticed I had gathered a few larger story arcs which incorporated various annuals across the Marvel Universe. Narratives such as The Evolutionary War and Atlantis Attacks, which I hope to review down the line, were strung out across multiple annuals, including issues from the Amazing, Spectacular, and Web of Spider-Man lines. Looking back, I also recognized I’d already written a review of at least one ASM annual (where Jonah and Marla Jameson were married) and a PPSSM annual (where Aunt May re-lived her youth). Ah, what the heck? I thought. Let’s fill in the gaps.

Therefore, a handful of posts in the near future will center on the annuals I have picked up from Spidey’s three primary titles. These stories, as far as I know, won’t have much bearing on each other or recent Spidey comics I have examined or will be reviewing. But I’m always happy for a surprise or two. Maybe some of these tales will be intertwined in ways I don’t expect. That’s part of the fun, isn’t it?

“Give Me a Hand, Future Max” 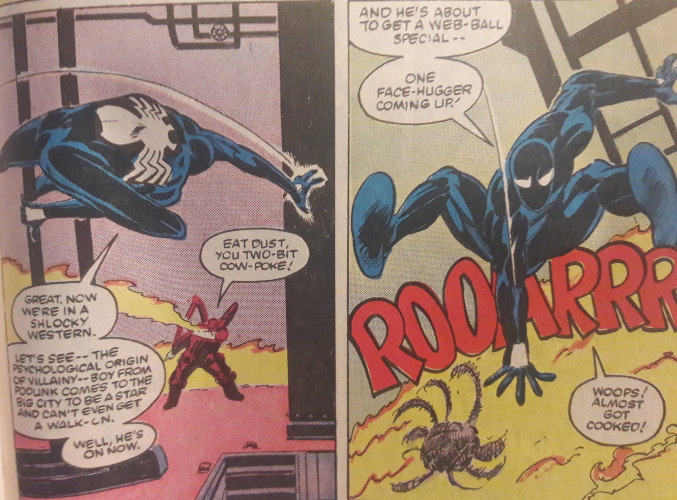 We’ve already seen a writer tackle a child-centric story during the “Alien Costume Saga”: readers may recall Tony, a young boy who desperately wanted to join a gang of older toughs called the Butcher Dogs. Created by Cary Burkett and Greg LaRoque, young Tony debuted in Marvel Team-Up #146, a scamp of a child who would be inspired by Nomad and go on to assist Spidey and Thor a few issues later. You may also remember Ollie Osnick, the star of a standalone issue of ASM where the boy donned a Spidey costume and some hydraulic legs and briefly fought crime as “the Spectacular Spider-Kid.”

Several tales of this type exist, where the hero aids a child or is aided by a hopeful youth. A classic example is “The Kid Who Collects Spider-Man,” a Roger Stern yarn that focused on a young boy afflicted with cancer who makes a simple wish--a visit from his favorite superhero (no, not Daredevil). These “human interest” pieces are intended to draw in the reader, give them a youthful face to empathize with or see themselves in. Maybe you were bullied like Ollie, wanted to be a part of a group like Tony, or either battled or watched a loved one fight a disease like Tim. How do the children in these pieces relate to you, the reader? If you find yourself in such a position, the writers have done their jobs. It’s the main reason “The Kid Who Collects Spider-Man” is often cited as a favorite Spider-Man story among readers. 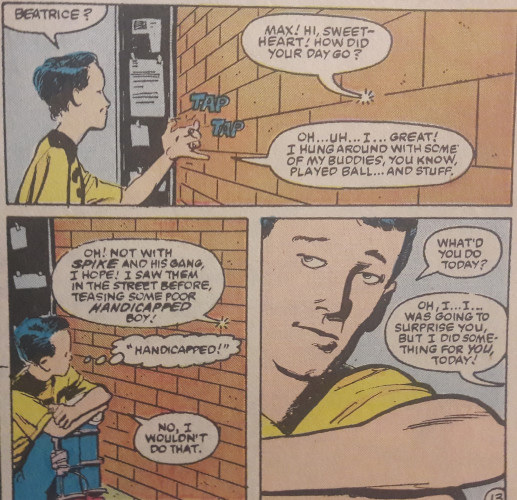 Such is the case with Max, the protagonist of Nocenti’s little narrative. Nocenti will be popping up a few times in the future, with oddly darker stories, meaning it’s nice to see a lighter, more touching tale from her. Off the bat, Max is complex--he’s smart enough to build robots, has a crush on the girl next door, gets bullied by kids, and suffers from a degenerative nerve disease. He’s got dreams, wishes, aches, obstacles...in certain cases, he’s very relatable. Perhaps you’ll find yourself struggling to see yourself in some of the particulars, unless you suffer from the same medical issues he deals with, but to a certain point, you understand Max. You know his frustration, his embarrassment, his nervousness, his joy. It may be a Spider-Man mag, but Max takes center stage for most of the issue’s first half. I don’t mind Max’s dominance in these pages, as Nocenti does such a decent job making him interesting and (largely) relatable.

Here and there, she misses the mark--Max seems to live alone in an apartment/laboratory, save for his robotic creations. No reference is made to his parents, or even if he has any, nor is there any mention as to how he ended up with his equipment. Did he inherit it? Is his work self-funded? Plot points such as these aren’t insurmountable to overcome to enjoy the issue, but some pieces are a little puzzling. Nocenti, again, wants you to relate to the kid, but in dialing up Max’s personality and struggles, she forgets to hone in on some potentially interesting smaller pieces. I’d love to have learned about his parents, especially if they contributed to Max’s genius or if his equipment was originally theirs. Nocenti seems to want you to just accept that, hey, there’s this genius kid with nerve degeneration living all alone in the heart of New York who can build robots and somehow escape being confined to an orphanage. It doesn’t quite hold up. 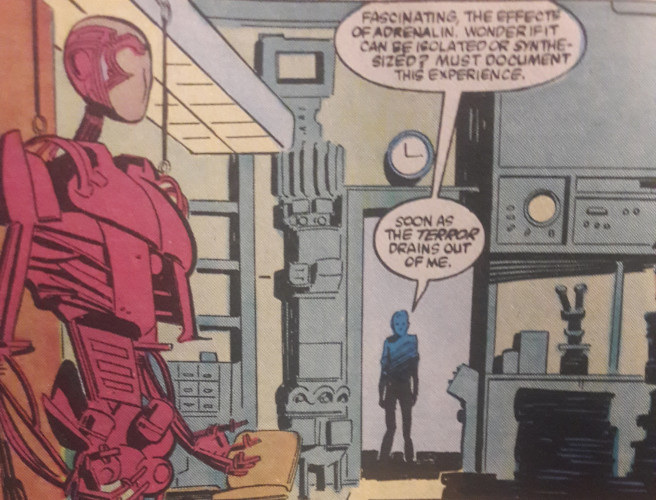 Spidey’s role in this issue is twofold--as both Peter Parker and Spider-Man. Peter runs into Max at a science fair where the young boy is displaying parts of an exo-skeleton he’s inventing. Peter takes an immediate interest in the boy, which is a wonderful nod by Nocenti to Peter’s science background. Heck, the science fair is hosted at Midtown High, Peter’s old high school, meaning the kid already sees Peter as a role model. It’s a great few panels by Nocenti, who uses the interaction to delve into Peter’s personality and have him momentarily mentor another similarly bright young man.

Part of me wishes that Nocenti doubled-down on this idea and pushed the Peter/Max relationship more. Peter has a chance to be a real help to this kid, but by issue’s end, there’s not a whole lot that he’s done. He does give the kid a small pep talk at the very end, encouraging the nervous boy to ask out his neighbor (who, oddly enough, we never actually see), but that’s the extent of Peter’s help. This final interaction has a “you go, kid” kinda vibe to it, like Peter playfully punches him on the shoulder and gives him a thumbs-up. But lighthearted as the issue’s final panels are, any emotional weight is kinda lost when you realize that Peter most likely never saw Max again. 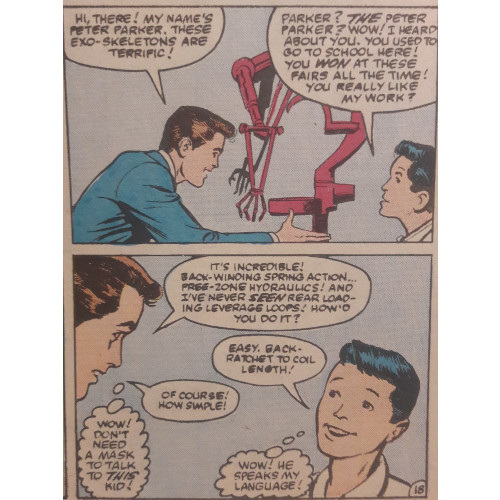 Nocenti’s villain for the piece, a cut-up by the name of Alexis Sharp, is an odd bad guy. He comes across as an out-of-work actor/con man who tricks Max into building him an Iron Man-esque suit of armor that resembles Tony Stark’s Mark 1 outfit or Obadiah Stane’s Iron Monger suit. It’s bulky but equipped with an impressive arsenal. Surprisingly, Nocenti doesn’t skimp on the details here--just as I was starting to wonder where Max got the necessary components for Sharp’s armor, she reveals that Sharp’s underworld contacts provided the ordnance. The armor gives Sharp the necessary strength to go toe-to-toe with Spidey in a genuinely entertaining battle. Buildings are smashed, missiles soar, and lead flies as Sharp tries to ground our hero into paste. Artist Tony Salmons (who, interestingly, provided artwork for the 8th issue of Peter Porker, the Spectacular Spider-Ham) conjures up an easy-to-follow fight scene, which is beautifully depicted on the cover by artist/painter Charles Vess, who also worked on the cover for the very first WSM issue.

Sharp’s voice is distinct--the washed-up crook often quotes from movies or takes on a variety of accents. His tone and words are gimmicky, and I think if Nocenti had stuck to one voice (like a “Listen here, see” gangster or “Howdy there” cowboy) for the whole fight, the angle wouldn’t have worked. Wisely, she plays with Sharp’s tone, allowing him to adopt several different accents during the entire fight. Instead of coming off as goofy, the gag becomes thematic, being somewhat enticing to follow as the fight develops. Spidey himself gets in on the joke at one point, tossing a web-constructed Face-Hugger at the crook. As someone who saw Alien for the first time shortly after reading this issue, I appreciated Nocenti’s effort more, as I had something to relate to. Sharp is, certainly, not going to go down in history as a supreme supervillain, but for a one-off thug, he’s not bad. He’s weird enough to be entertaining, but not irritating, unlike D.J. Jones, the sleazy tabloid reporter created for ASM #262. 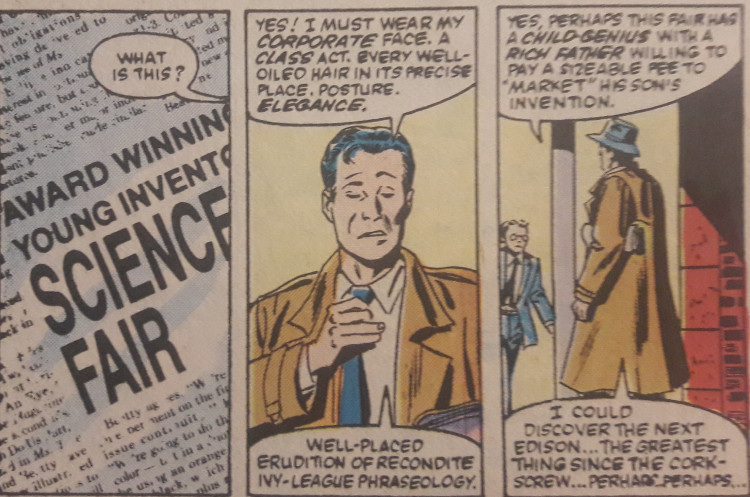 Our first Nocenti-crafted story is a far cry from bad--it’s surprisingly decent in its premise and solid enough in its execution. You do get the feel that Nocenti was more attached to her premise than in fleshing out some of the associated details--like the fact we never learn about Max’s parents or living situation--but the story as a whole doesn’t suffer too terribly from these infinitesimal grievances. Nocenti also avoids the dreaded pitfall of being overly sentimental or sappy, allowing the reader to empathize with Max without feeling force fed with emotion. Heck, maybe that’s why we’re never given information regarding his parents. In a sense, Nocenti does just enough to draw you in and keep you reading, perhaps erring on the side of caution. For the most part, it works, keeping us engaged as we read through Max’s story. But part of me still wishes Nocenti would let us dip more than our toes in the water, especially for characters who haven’t appeared in the 35-plus years since their inception.