This standalone narrative wobbles in places, an interesting concept weighed down by mediocre execution 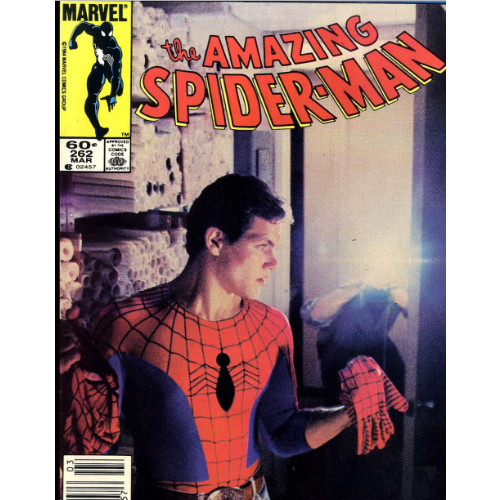 Let’s face it: it’s probably difficult being a shutterbug in the Marvel Universe. Not that you don’t have a plethora of material to snap photos of, but with all the superheroes and villains, pitched battles, and amazing showcases of strength and ability occurring on a daily basis, you might end up with too much. Inundation, as it were. In my mind, two famous fellas stand out when I think of fictional photogs: “Peter Parker” is one. You know him already. “Phil Sheldon” is the other. He’s the star of Kurt Busiek and Alex Ross’ Marvels limited series, which I hope we’ll look at in the future. Eh, I might even tip a hat to old, poor Lance Bannon (RIP).

They call him “Dirty Jake” Jones for a reason, y’know. He’s the kind of photographer who’ll take photos of Howard the Duck eating fowl on Thanksgiving or Hawkeye crying in his bedroom because he has no powers. The humiliating pics, the tabloid photos...heck, the guy even hopes that President Ronald Reagen will look foolish on a visit to New York so he can snap some primo material. His sleazy tactics have gotten him booted from several major newspapers by time our story starts, his credibility floating in the same sewers where those giant alligators supposedly live.

And that’s when he stumbles upon the opportunity of a lifetime. 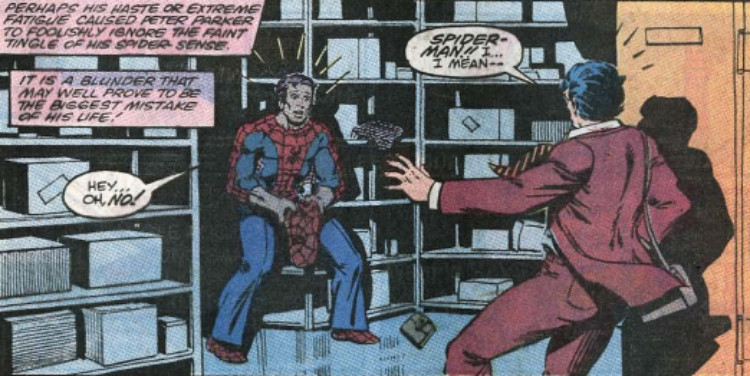 Let’s comment on the cover, to start: appropriate to the story being told, the cover is a photograph, taken of actor Scott Leva dressed as Spidey. From what I’ve read, Leva was tapped to play the hero in a then-upcoming Spider-Man movie by Cannon Films, which would have predated Sam Raimi's Spider-Man by about fifteen years. The movie was never made, but at least we get a cool comic cover out of Leva’s brief association with the Web-Head.

On to the comic.

Co-writer and inker of the now-famous “Demon in a Bottle” story arc over in the Invincible Iron Man (which is, I’ll state, a pretty great story), Layton handles both writing duties and the pencils on this standalone issue. Wholly divorced from previous ASM issues we’ve examined already--where Tom DeFalco, Ron Frenz, and Rick Leonardi have largely been focusing on Spidey’s conflict with the Hobgoblin and Peter’s turmoil with both Aunt May and Mary Jane Watson--ASM #262 is its own narrative, with zero reference to continuity outside itself. I can’t say this is a problem, for even though I tend to enjoy when a story packs in references to the wider universe it exists within, Layton does well enough drawing you into this single issue story by its own merits rather than resting on the laurels of others.

“Dirty Jake” Jones gets the break of his career when he stumbles upon a young man changing in an airport stock room. His quick instincts kicking in, Jones snaps a photo of the man’s face and dashes off. Thus, our tale is kicked into high gear from this picture perfect inciting incident, as poor Peter Parker realizes that not only has someone seen his face outside his mask but now has solid evidence.

Peter’s deep desire to remain anonymous as Spider-Man has long been a defining trait. Whether it’s been to keep his Aunt May in the dark for fear of her frail constitution, or to keep friends and family safe from the machinations of several of his arch-enemies, Peter has been loathe to reveal his identity to anyone. We’ve read about at least one instance, with the Black Cat, where Spidey willingly let her in on his secret, but for the most part, Peter likes keeping things under wraps. There’s legitimate danger to be had if his name ever leaked to any of his foes--longtime fans will certainly remember the drama created between Spidey and the Green Goblin when the latter learned that Peter and Spidey were the same man--but even if the public at large became aware of the secret, the fallout would be grave.

Layton uses this idea to great effect. So often, Spidey has worried that his superhuman proclivities will result in his identity discovered by an enemy, the police, or someone wanting to besmirch his name or ruin his career. But how often has he had to worry about an opportunist with a camera around his neck accidentally stumbling in on him? Coincidental the exchange between Peter and Jake may be, but Layton sets it up really well. The idea has potential, and throughout the issue, Peter feels genuinely concerned for what might happen. Will Jones sell the photos? Blab to someone on the street? How will he handle the precious evidence he holds in his hands?

The concept may be filled with potential, but Layton’s execution leaves a bit to be desired. Jones scampers immediately, leading to a chase through an airport that would be more thrilling if the photog were actually superhuman, like Peter. For such a sleaze, Jones up giving Spidey a literal run for his money. Later in the scene, Jones drops a dollop of information, commenting that his "experience with the black market during my army days is about to pay off big!” I believe we’re supposed to interpret this as the reason he can evade Spidey as easily as he does--his natural athleticism from his military past. Granted, part of me can believe that a former soldier can retain his physique or agility for quite a while, and I can also fully accept the idea that Spidey has his off days. Perhaps, in his mad rush to catch Jones, he makes several miscalculations during the chase. Unfortunately, considering how the scene plays out, you’re led to believe that Jones got away just so we can have additional segments in the story, meaning his escape feels like a coincidence. 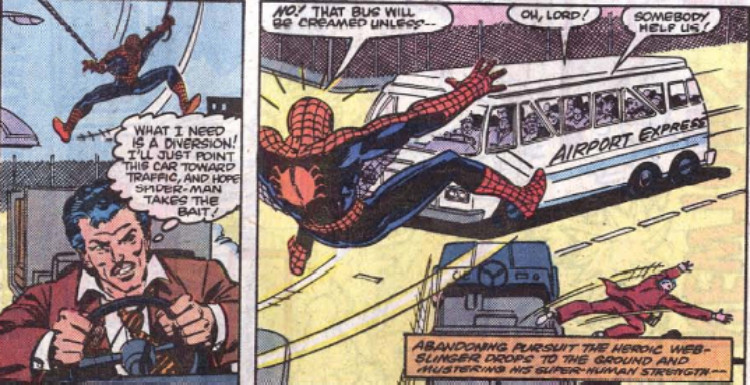 Once Jones escapes, the story actually improves. This is where we get Peter in a “tossing and turning” type phase, where he worries over what steps Jones is going to take. We are treated to a parallel scene, where Jones is doing some wrestling as well regarding the best method of using the photos. Eventually, he tries to fence the photos to some local toughs, which gets him in hot water with a couple of hoodlums who think that creaming him is a better proposition that buying the negatives off his hands.

Jones’ scenes follow your classic “in over his head” style of story. Layton ratchets up the stakes, taking the guy who you (and Spidey) thought had all the cards and tossing him into a situation where, as it turns out, he doesn’t have the leverage he believed he had. All of a sudden, our smug shutterbug loses the power he thought was his; the treasure he stole is worthless. Thus, it’s up to Spidey--the guy whose identity Jones was planning on selling out for some cold hard cash--to rescue this dude who, in several respects, is scum. The parallels here between the two characters are worth noting: it’s Spidey in one corner and Jones in the other (ding! ding!) as the two square off in morally-tinged combat. Jones, who earlier pickpockets a random woman’s wallet because, hey, he has bills to pay, receives a virtuous haymaker from our starring hero, a young man willing to save the life of the guy who would have otherwise sold him out. It’s a quick KO in the decency department, for sure. 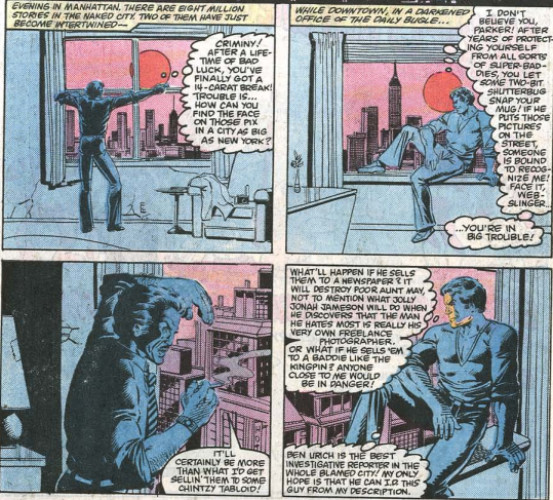 Somewhat disappointingly--and somewhat SPOILER-Y--Layton brings his tale to a ho-hum conclusion. Jones, impacted seemingly not at all by his experience with the thugs and Spidey, decides to leave New York and make a comeback later on, hoping for a chance to match the face of some real life young man with the face in his photo. After all he’s gone through, the guy’s still looking to make a quick buck at some later date. I’d like to say Layton’s point is that some people, even after being treated mercifully by another person, fail to accept that graciousness and remain cold, bitter, or selfish. If that’s the lesson he’s trying to make, it’s a poignant one. Perhaps Layton intends us to shake our heads in disappointment at Jones, to look at his unchanged attitude and reflect on it. But, at least as my interpretation goes, I don’t perceive this to be a “cautionary tale” of sorts. I’d like to confidently say that, maybe, Layton’s point is that Jones receives his “comeuppance” from realizing that, most likely, he’ll never be able to match Peter’s face to Spidey’s (just wait another twenty-one years for Civil War, Jake, and you won’t need to). But I don’t know if I can say that and feel completely assured.

I can’t give you the reasons as to why DeFalco and Frenz stepped aside for a single issue. Maybe they were backlogged on projects and needed more time to work on upcoming stories, and thus Layton was tapped for this one-and-done. Whatever the reason, ASM #262 may be filler, but at least it tells an entertaining story. It’s not perfect, considering it hinges on coincidence and has a lukewarm ending, but it kinda works. “Dirty Jake” Jones is an interesting character, especially when held up against Spidey and his freelance alter ego, even if he hasn’t appeared in Spidey comics since his inception.

If we're lucky, maybe Nick Spencer will bring him back. 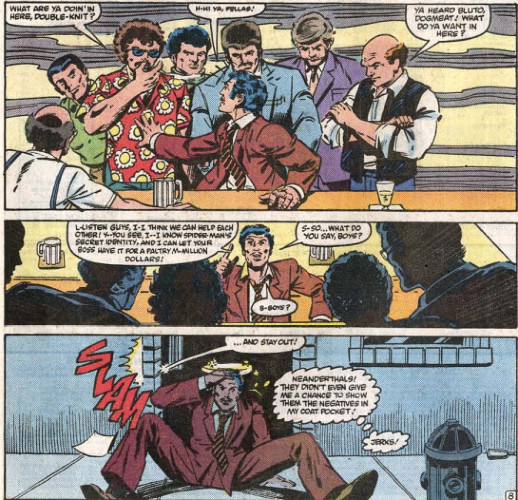 Oh, and that cover is great.