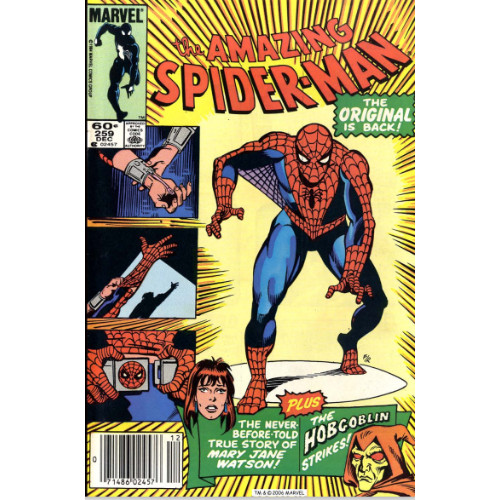 When we last left our webbed-wonder’s adventures in the hands of Tom DeFalco, Peter had just confronted not one, but two despairing damsels and had shed his black costume upon learning his spiffy dark duds were in actuality an alien organism seeking to totally adhere itself to Spidey forever. Not wanting to play host to his symbiotic house guest, Spidey found liberation thanks to Mr. Fantastic’s sonic blaster and some fire-flinging from the Human Torch. With that off his plate, Spidey could get back to worrying over women.

The Black Cat plays no part in this issue, but MJ’s role is substantial. This is a pivotal issue not only in the lives of these characters but in their relationship together. By this time, Peter had sought solace in MJ’s friendship after Gwen’s death, leading up to a marriage proposal that she had spurned. Fortunately, the two were still on good terms with one another, creating a strong friendship despite MJ’s recent revelation that she's known Peter’s duel identity as Spider-Man for a long time.

The dust of the "Alien Costume Saga" is beginning to settle for now (though we’re not quite out of the black-ooze forest just yet), so let’s turn our attention from life-sucking parasitic life forms to a more wholesome topic: Mary Jane Watson’s secret past!

“All My Pasts Remembered” 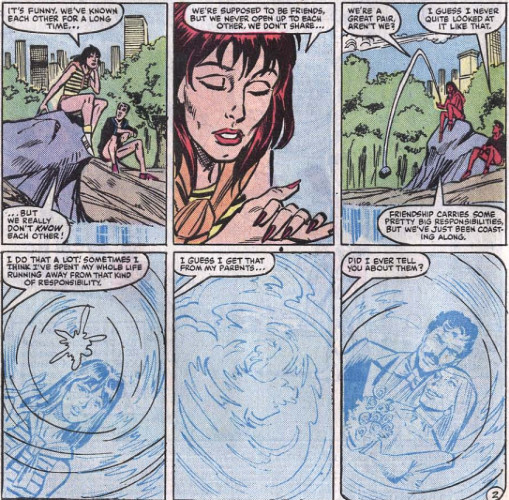 Up until this point in Spidey’s history, I can’t recall what exactly readers knew of MJ’s past. From what I remember, writers focused more on fleshing out her character in the present, establishing long-running traits such as her high-energy partying lifestyle and her friendship with Peter. But DeFalco, jumping off last issue’s revelation, fills whatever blank spaces existed in MJ’s hitherto unknown history, making for a story that gives some much needed background to someone who will become perhaps the most important supporting cast member in Spider-Man publications. Considering Bill Mantlo, at this time, had recently done something similar with Aunt May, it seems appropriate that this "origin story" for MJ pops up now. As the kids say, we're getting all "the tea" on our favorite females.

On one hand, MJ's story is one you’ve heard before: the girl comes from a family with a caring mother but abusive father raging against the world and misdirecting his anger towards those he wrongly believes causes his problems. MJ’s father will become a very minor character in a few years’ time, one you may end up sympathizing for, but for now, DeFalco wants us to seethe against Philip Watson and his bitter attitude towards his family. He sets up the situation well, and you feel a tiny thrill when MJ’s mother decides she’s finally had enough, packs her daughters Gayle and MJ up, and flees from her husband. These are not ideal conditions, and I believe DeFalco understands that, because these hardships end up being the impetus for the person MJ was in comics at the time and, largely, who she continues to be. 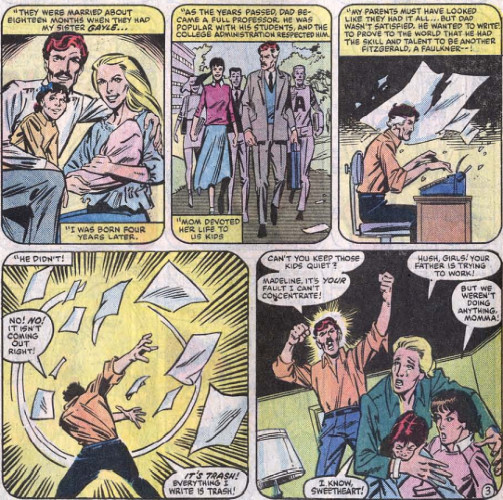 One of the beauties of Spider-Man as a character is that he’s valiant despite the difficult, dark, or tragic circumstances he finds himself in. Perhaps it was his fault that his Uncle Ben was murdered, but Peter used that tragedy to shape himself for the better. MJ’s own internal struggles, brought on by the difficult family situation and her mom’s declining health and eventual passing, work similarly to establish her character. It’s because of the strenuous home life that MJ created her bubbly, friendly, partying persona. As she says to some friends in a flashback, “Nothing’s ever wrong with Mary Jane Watson!” Always sunny, always positive...this results in what appears to be a rather shallow character, a young woman whose sole interests are fun times and men. But as she tells Peter early on in the issue, she’s not the “space cadet” other people perceive her as. DeFalco takes this surface level characterization of MJ and tosses it out into deeper waters, moving her from a “she just happens to be a shallow young woman” and providing her with a reason to appear that way.

I’d consider this a retcon of sorts for the character, and I believe it’s an awfully good one. Without much of a previously established history, and with her personality founded upon those core “party it up” characteristics, MJ came off as poorly developed. I’d say her most memorable moment, until this issue, came shortly after Gwen’s death--given the opportunity to leave a mourning Peter Parker, MJ stays to bring him comfort. Peter, driven by his grief, even harshly comments on her perceived shallowness, an act of cold anger intended to drive her away. But MJ stays. It’s a shift for MJ and serves a powerful moment of growth for her as a supporting cast member and highly important figure in Peter’s life. Though this issue doesn’t touch on that prior scene between Peter and MJ, it provides an explanation for why MJ acts the way she does.

Simultaneously, DeFalco weaves in backstory for MJ’s relatives, especially for her sister Gayle. Marrying her high school sweetheart Timmy upon graduation, Gayle finds her life beginning to parallel her mother’s marriage as Timmy becomes frustrated at a lack of success and the burden of children, eventually abandoning her. DeFalco paints the similarities but leaves the connection between Gayle and her mother implicit, allowing the reader to form those tethers as they read. Following their mother’s death, Gayle turns to MJ for support and structure, but MJ leaves for New York. This makes MJ’s decision to stay and console Peter all the more intriguing and represents a real step of growth on MJ’s part.

Though MJ is baring her soul to Peter in this issue, his role in this tale is, unsurprisingly, limited. MJ touches on learning his identity as Spider-Man early on in the issue--even indicating she wants this to be a larger discussion about knowing his secret, a potential conversation which is soon derailed by her own backstory. She also ends the conversation by mentioning how frightened she was to bring her past up with him but stepped forward despite her urge to run again. Slightly irritatingly, she mentions that knowing each other’s secrets means they can grow closer as friends...but only as friends. “I care about you, Peter. I really do!” she tells him. “I may find it real hard to cope with the fact that you get your kicks by risking your neck, but that doesn’t change my feelings for you! Look, I don’t want you to misunderstand...I’m not talking about love!” 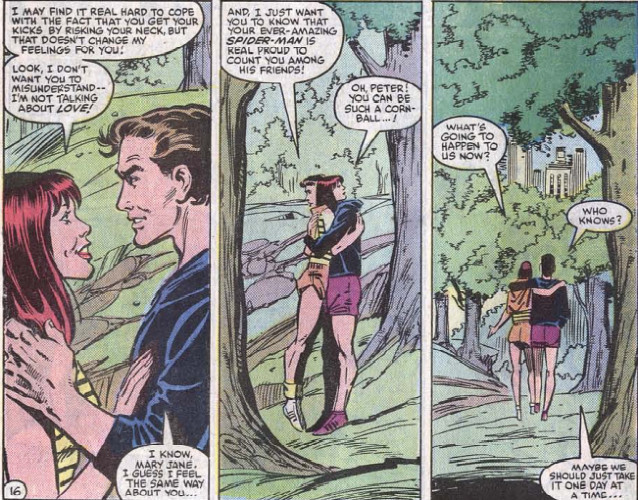 I don’t mind the “only friend” direction of the conversation, especially with the hindsight of knowing Peter and MJ were married a few years later (yeah, yeah, yeah...I know…“One More Day,” blah-blah-blah). What bothers me is her statement about her “feelings,” wanting Peter to not misunderstand. It comes across like DeFalco is defending the use of the word “feelings,” as if he’s hinting at a deeper infatuation that MJ may have with Peter but then backing off and reminding Peter and readers that now’s not the time for MJ to develop a romantic relationship with him. If she’s sincerely okay about just being friends with Peter, why not just leave it at that? It’s a confusing line of dialogue, and a very minor complaint to be sure, but it bugged me when reading the issue.

MJ’s background is a gift in this issue, a necessity that shapes her character for future stories and offers explanations for why she is who she is. No longer the seemingly ditzy airhead she’s been portrayed as in the past, MJ becomes a character who is happy-go-lucky out of choice, not mere obliviousness. We see a young girl with genuine worries and concerns, whose environment and decisions have shaped the woman she’s grown into. We get a look into a past that, like Peter’s, has its dark splotches and see how the ramifications of those errors can be unknowingly found in past issues. DeFalco does a great job at making MJ more relatable to both the audiences and Peter, creating a three-dimensional image of a woman who will one day be the most important person in Peter’s life.

“One More Day” can go jump off a cliff.