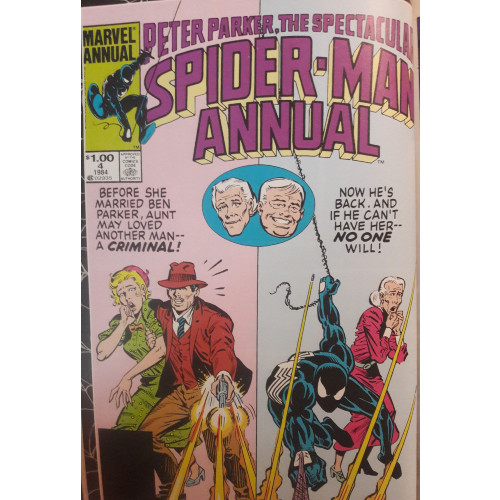 She’s his mother, no doubt about it. Despite Peter not being her biological child, May put in more effort raising and nourishing Peter than anyone else, aside from Ben, after the death of Peter’s parents. And after her dutiful husband was murdered, May soldiered on, a widowed mother of one very smart boy. She’s gone through her share of ordeals--as if Ben’s death wasn’t enough, she’s also faced heart attacks, surgeries, supervillain kidnappings, and near matrimony to Doctor Octopus--but managed to beat them back, usually with the support of her beloved nephew.

But as recent stories can attest, Peter and May’s relationship has frayed. Peter’s decision to quit his graduate studies does not sit well with May at all, if I may put it lightly, and at least one attempt to reconcile the two fell through and caused consternation between Peter and Nathan Lubensky. Peter and May are very clearly “on the outs,” and though May’s stubborn refusal to speak to her otherwise caring nephew may be directed by writers wanting to carry this story arc as long as they can, her disappointment is understandable.

That’s the situation we find ourselves in at the start of this annual, which will offer some much needed background for May Parker...or, as she was known in her single years, May Reilly. 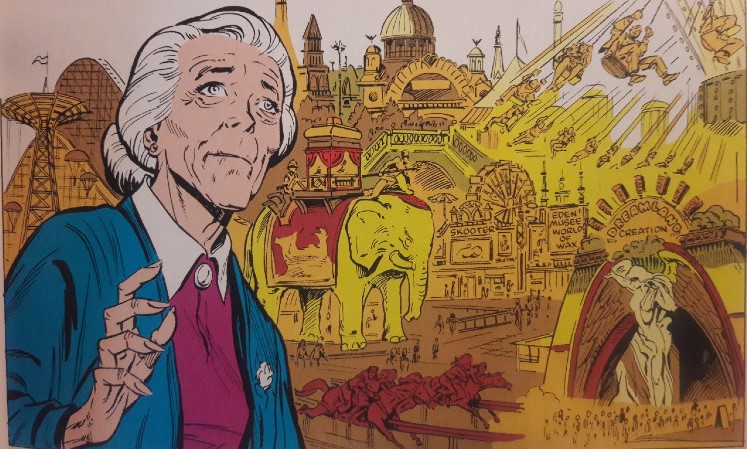 I’m not sure how much of Aunt May’s backstory had been revealed by this point in comic book history, but as someone who largely knew nothing of her past save through commentaries and encyclopedia entries, I was happy to finally read an issue that detailed May’s “pre-Peter Parker years.” The issue, by today’s standards, is a little dated, as it positions May’s teenage years during the Depression; naturally, this occurs because the “present” when this issue was published was “1984” and, most likely, May’s background has been updated and pushed past the Depression era as we’ve entered and progressed through the first two decades in the 21st Century.

Nevertheless, the Depression serves as a fantastic backdrop for the story: flashing back and forth between past and present, the annual follows a seemingly hazy Aunt May, as she takes nightly strolls to places that influenced her growing years, bringing her mind back to yesteryear. Mantlo uses this plot to great effect, fleshing out elements of May’s past that may not have been plain to current readers. We see her parents and the home she grew up in, and we run into a young Ben Parker, who is clearly infatuated with May Reilly. The Ben Parker panels in particular made me smile. Having died in the very first issue Spidey appeared in, Ben was immediately denied the opportunity for character growth and progression in future stories. Writers have tried working their way around this from time to time (alternate universe versions, having Spidey talk to Ben's ghost, etc.), but for the most part, comic creators have chosen to wisely sift through the preceding years and invent backstory for Ben. His role here is actually significant near the end of the story, with Mantlo working in the moment where Ben and May perhaps kindled a romantic interest in one another and, fantastically, granting Ben the same protective characteristics he’d show for May the night he was murdered, defending her from an intruder. 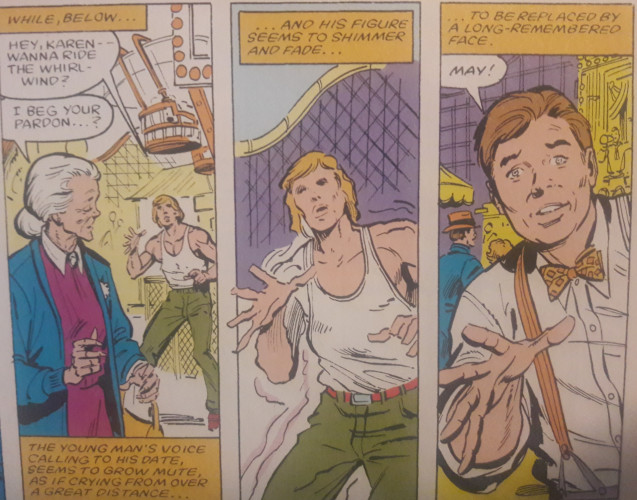 In the present, May’s late night walks concern both Peter and Nathan, with the former following her a couple times as Spider-Man to various locations--a dance hall, Coney Island, May’s childhood home--and as Mantlo fills in May’s past, present day Peter worries about his aunt. He wonders if she could be experiencing issues with her memory or becoming senile, which I thought was a surprisingly interesting line of thought for Mantlo to introduce. Old as she is, May has suffered multiple health related issues, but I don’t quite remember (how oddly appropriate) her ever being afflicted by anything memory- or thought-related. A dash of realism enters the story as Peter is genuinely worried, not just for her physical safety, but for her mind, wondering if this could be the early stages of a worse illness. Peter, who has so often worried about Aunt May learning about his secret identity for fear of the “shock” it would give her, has a new concern that seems more strongly connected to her health rather than his superhuman double life.

The one problem I have with Peter’s role is that he ends up not doing anything significant to the plot. At Coney Island, he stops a merry-go-round that May is ridingfrom careening out of control using his patent-pending spider-strength, which does obviously keeps his aged relative from doing a header into the ground. But the merry-go-round incident has little to do with the story and seems introduced by Mantlo as a way to get Spidey to just “do” something and leads the hero to losing track of his aunt. Later on, he does keep a few thugs from potentially mugging her, but this again feels like an element Mantlo put in to keep Spidey relevant. If Spidey didn’t need to be present, then the troubles with the merry-go-round and the muggers would most likely have been written out of the story. 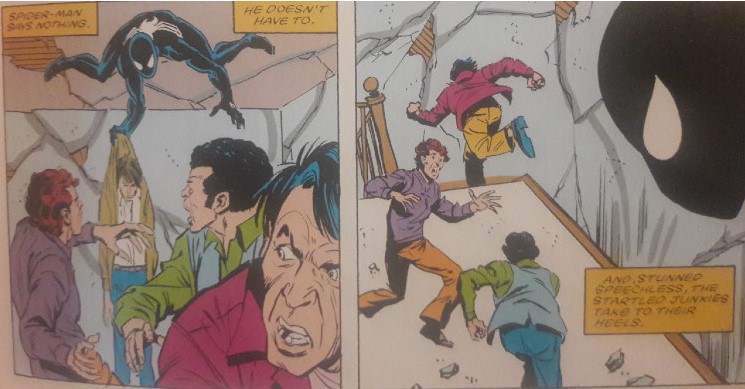 Part of me was hoping that Mantlo would use this adventure to have Peter and May resolve the conflict they’ve been embroiled in, but he hardly brings up the disagreement between the two of them. Early on, Nathan Lubensky references their recent falling out, but he doesn’t even implore Peter to help May despite their misgivings. The reference seems simply a way of bringing readers up to speed about recent circumstances going on in the individual Spidey titles without having it impact the story overall. I can see why Mantlo wouldn’t want to focus on Peter and May’s tumultuous relationship, since Tom DeFalco is utilizing that subplot over in Amazing Spider-Man, but allowing Peter to assist May as a show of good faith and a reminder that he still loves her would have been a nice emotional touch.

It also would have helped the ending of the story, which I’ll spoil here: May follows one last note to her childhood home, where she bumps into an old boyfriend, Johnny Jerome. A two-bit crook, Johnny courted May and even tried proposing the night the police finally caught up with him; recently released from prison, the now older Johnny wishes to rekindle what he once had with May. May refuses. I have to give props to Mantlo for interspersing scenes in the present with scenes from the past--in both instances, Johnny is offering May a life with him, an offer which falls through both times. In the first instance, it’s the young Ben Parker who breaks them up, citing Johnny’s felonious lifestyle as why May should not go along with the criminal. Ben doesn’t plead, he doesn’t argue why he deserves May over Johnny...he’s purely there to help, leading to Johnny’s arrest. 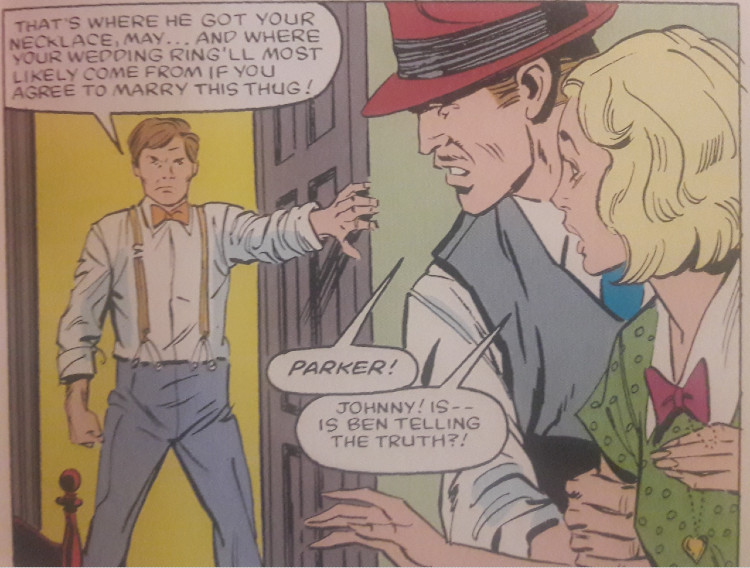 In the present, it’s May who convinces Johnny he’s living in the past and, perhaps as a result of her own reminiscing, helps him realize how dangerous it can be to remain stuck in those memories. I do like how May is given agency in the scene, how she applies what she’s learned about daydreaming and being trapped in the past to Johnny’s own situation. But I still wish that Peter had shown up as a parallel to Ben, not necessarily to save his capable aunt, but in a way to display that, much like Ben was there for her, Peter will be there in his place. Peter makes an appearance, but it’s as Spidey, keeping the thugs from mugging his aunt, as I mentioned before, and staying out of sight of her and Johnny.

A backup story, written by Bob DeNatale (who also wrote a tense backup strip for Marvel Team-Up Annual #7), focuses on the Black Cat. Spidey pops over to her apartment for a regular date night, food and a movie, but Cat becomes distracted when a gift Spidey bought her mysteriously disappears. The rest of the short tale follows Felicia’s attempts to retrieve the gifts and ends with a “twist” of sorts when the “thief” is revealed to be an old friend just playing a game. The story didn’t really strike a chord with me, as the “old friend who decided to show up randomly” plot feels out of left field and awkwardly inserted. Props to DeNatale for the set-up, however. Honestly, a story about Peter and Felicia trying to have a “normal” date, like other couples have, instead of spending all their time fighting crime sounds like a lot of fun. “Acting like a normal couple occasionally is important to me, Felicia,” Spidey says, adding that “Sometimes I need reassurance that there’s more to our relationship than prowling around rooftops looking for trouble.” It’s a great thought and gets to the heart of some of the issues Al Milgrom has been sowing into PPSSM; I think if DeNatale had honed in on that sentiment, either giving Spidey and Cat a regular night or having them realize their relationship just can’t work like other couples’ relationships do, the story may have been a bit more insightful. 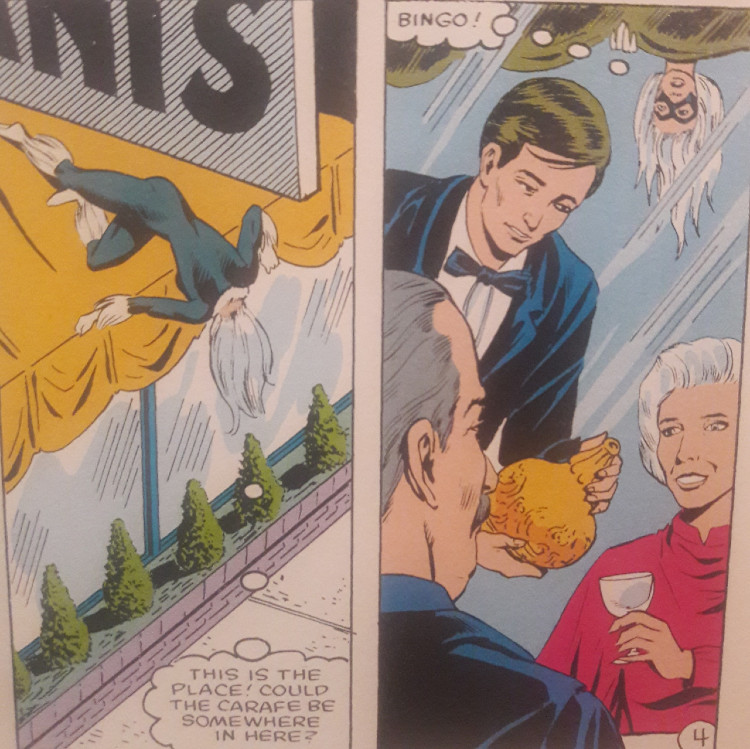 Mantlo’s efforts in giving Aunt May a fleshed out backstory are admirable. Seeing the life that May lived as a teenager makes the character more relatable and gives her more depth than “older woman who suffers from health issues, has failed relationships, and loves a nephew who keeps secrets from her.” Peter’s role could have been improved, but the scenes focused on May make for entertaining reading. Even if the backup tale is a little lackluster, I’m glad for the chance to learn more about the woman who would eventually become Spider-Man’s surrogate mother.