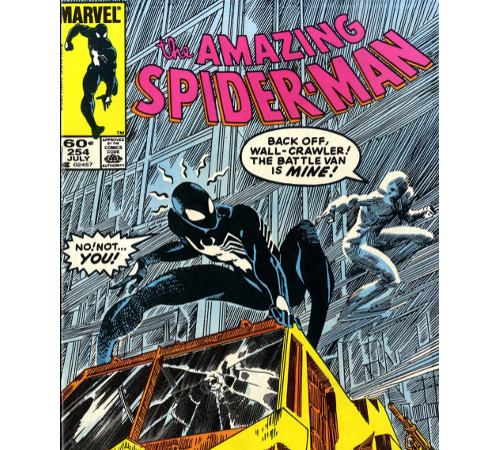 Opening this issue, the reader is immediately slapped by the title. “With Great Power…” it boldly proclaims, the first half of an oft-quoted mantra synonymous with Spider-Man and easily known and celebrated by his fanbase. “...comes great responsibility,” you may automatically say, your mind mechanically filling in the rest of the phrase, an effortless exercise as the saying has been ground into your brain from seeing it flash upon the pages of decades’ worth of comics. Or is that just me?

Mistakenly attributed to Uncle Ben (in the comics at least--though the film versions of Ben Parker have used the line or a variation of it, the famous phrase is never uttered by Peter’s beloved relative in the source material), “With great power comes great responsibility” is not so much the actual wording of a lesson directly given by Ben but a representation of the internal transformation Peter underwent following the old man’s murder. In the wake of his uncle’s death and the realization that Spidey could have prevented it (in what is still one of the best twists in comics history, never mind how many people know it or how often it’s been replicated), Peter chooses to embrace the responsibilities that come with his powers.

It therefore behooves various writers to place Peter in circumstances where that idea is challenged. As we enter the sixth issue about Peter’s days in his fabled black costume, we get to watch as Tom DeFalco and Rick Leonardi have our stalwart Web-Spinner wrestle with that idea.

As we head into this issue, I’d like to point out that the nagging timeline issues I’ve been complaining about are, for the moment, FINALLY resolved here. DeFalco very wisely inserts a comment about Spidey’s and Black Cat’s fight with the Blob in PPSSM #91 happening the previous week, putting a decent amount of temporal distance between Milgrom's most recent issue and this one. Yay.

Several writers have tackled Peter juggling his powers and responsibilities over the course of the nearly sixty years the character’s adventures have been in publication. DeFalco’s take on the mantra, then, is not adding anything new to the table, but it certainly is a well-done reminder of such a classic Spidey trope. Having placed Peter in the uncomfortable position of telling Aunt May he’s choosing to quit graduate school, DeFalco ramps up the discomfort. When May’s fiancé, Nathan Lubensky, tries to set up a little tête-à-tête for the two to settle their differences, Peter leaps at the chance. Kept in the dark about the meet up, May’s attitude towards Peter, reacting coldly when the young man tries calling her earlier, suggests it’s probably best not to tell her. 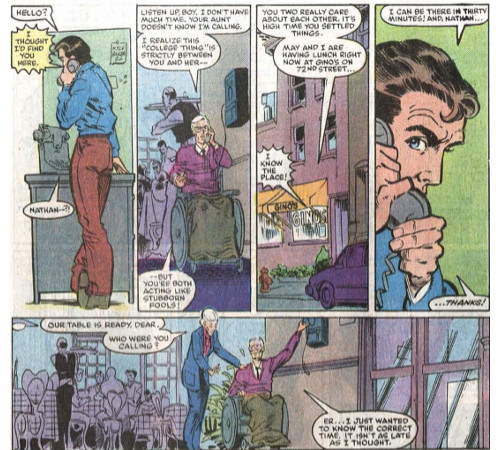 As I read the issue, I was struck with yet another classic Spidey trope that both DeFalco and Milgrom have been injecting into their respective titles: Peter’s problems with women. Normally, this extends to his romantic relationships, as highlighted by Milgrom in the pages of Spectacular Spider-Man. But the trope takes a decidedly familial angle under DeFalco’s pen as Peter forces his way through this rough patch with Aunt May. DeFalco may have awkwardly composed the scene where Peter revealed his decision to Aunt May in ASM #253, but there’s no denying how well he keeps the tension between the two of them simmering. And I think I agree with DeFalco’s decision to make Aunt May give Peter the cold shoulder. Peter dropped a bombshell on the woman who’s his mother in every sense but biological, and as someone who has caused several arguments with my own (biological) mother, I understand that some people can just reach a point where they don’t want to talk to someone who has upset them. Nothing the other person says can really justify or make up for how they’ve hurt an individual.

Inserted between the familial tension is laced some tried-and-true superhero action as Spidey takes on the threat of Jack O’Lantern. In a previous issue, before Secret Wars, Spidey failed to catch a new foe named the Hobgoblin, whose impressive battle van went careening into the Hudson. Finally fished out of the drink, the van is being impounded when a group of thieves, led by criminal mercenary and Green Goblin-ripoff Jack-O-Lantern, snatch it. 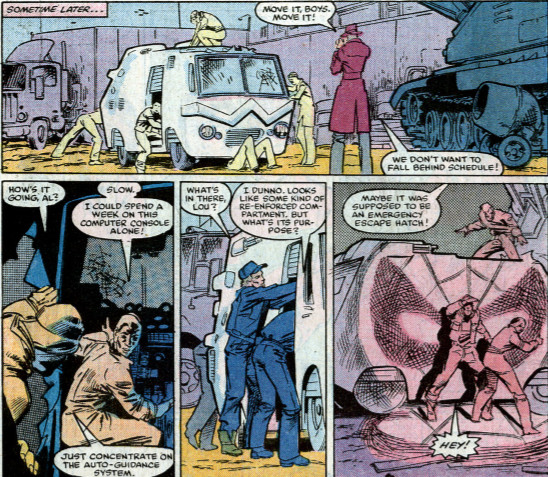 The saga of the Hobgoblin is both famous and infamous to Spidey fans, and though I’ve never been able to mentally piece the whole thing together, I can offer a brief summary: when introduced by writer Roger Stern during his run on ASM, the Hobgoblin was intended to be a mysterious villain with a secret identity, similar to the Green Goblin’s original conceit. Under Stern’s direction, the villain was supposed to eventually be revealed as Roderick Kingsley, a fashion mogul turned criminal. Once DeFalco took over the book, however, these plans were altered significantly. I won’t spoil DeFalco’s direction here, as I may be touching on it later, but I will say that, in this issue, DeFalco reveals Jack O’Lantern is employed by, or is in league with, the Hobgoblin, continuing to construct the mystery surrounding the villain. Spidey fans know that Jack O’Lantern, alias Jason Macendale, will eventually take on the Hobgoblin persona for a time, further compounding the mystery. Messy as the entire mystery ends up becoming, DeFalco at least keeps Stern’s original Hobgoblin concept in play for this issue.

By this issue, readers had been led to believe the Hobgoblin was dead, so when a shadowy figure talks to the gang stealing the van while focusing on a pumpkin bomb on a desk, you start to wonder if Hobby is actually alive. Even if the villain is revealed as Jack O'Lantern shortly thereafter, the bait-and-switch tactic still feels natural instead of underhanded, and though readers will eventually learn that Hobby is alive and kicking, DeFalco and Leonardi do a nice job teasing his potential return in this issue. Even Leonardi’s cover depicts a shrouded figure on a glider who sorta, kinda fits a Hobgoblin-y shape, teasing you before the Jack O’Lantern reveal. Unable to remember this particular issue before I read it as a part of the whole “Alien Costume Saga,” I was pleasantly surprised that, instead of just “resurrecting” the Hobgoblin immediately, the creators allowed his potential demise longevity. 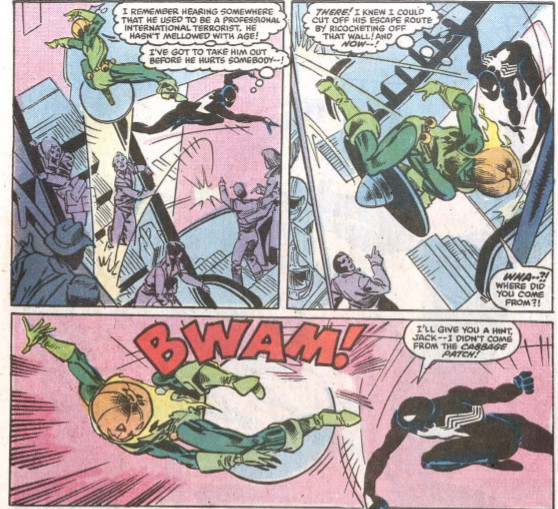 DeFalco and Leonardi set up a “race against time” scenario, wherein Spidey believes he’s got time to stop Jack O’Lantern and still reach his rendezvous with his aunt. It’s a situation readers have seen play out repeatedly--which direction does Spidey go? Does he embrace his superhero responsibilities to keep others safe or rescue them from danger? Or does he follow Peter Parker’s path and try to smooth over difficulties with his aunt? As you read, you sincerely hope that Peter would somehow manage to fit in both stopping the pumpkin-headed mercenary and meet with Aunt May, but the deeper you get into the issue, the more DeFalco pokes at your doubts and plays at your uncertainties.

Like several issues at this point, the “alien costume” part of this saga is largely set aside for telling a tale with classic Spidey tropes. The costume does as it always has done for the past parts we’ve discussed--changing from superhero outfit to civilian clothes, holding “tools” like Spidey’s spider-signal in its “pockets”--and hasn’t added a whole lot of appeal to the character since its inception in ASM #252. This was a detail I hadn’t noticed much of during my first readthrough, but going over the story arc again, I can see how the costume, right now, is simply that: a costume, a brand...the “alien trying to bond to Peter” element will come to light down the line. 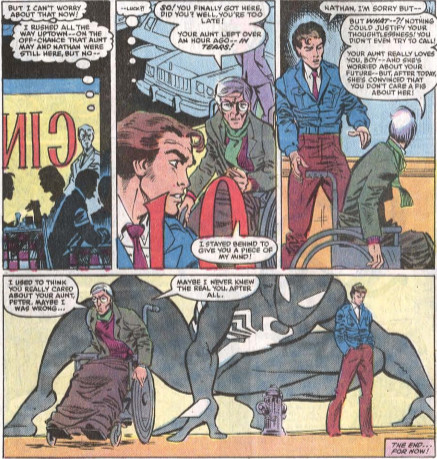 I guess that goes to show that the “Alien Costume Saga” was only a “saga” in name only; at this stage, the stories told in ASM, PPSSM, and MTU are somewhat interconnected but don’t necessarily build on each other as distinct chapters of an overarching narrative (which could account for some of the timeline fractures I’ve previously discussed). With his focus on the Hobgoblin, Peter’s graduate studies, and Peter’s relationship with Aunt May, DeFalco seems interested in other areas of Peter’s life than Milgrom is, especially since Milgrom has done the lion’s share of constructing (and possibly deconstructing) Spidey’s relationship with the Black Cat. Thus, it makes sense that these chapters aren’t ramping up to a spectacular climax with a central villain, main theme, or overall plot driving each issue.

Looking at this issue as a standalone narrative, you get a rather nice one-and-done tale regarding the price of a young man’s responsibilities as a superhero, particularly when they’re set up against his responsibilities as a student or nephew. DeFalco inserts bits of a larger narrative, the mystery of the Hobgoblin, but doesn’t let that story steal focus from the Peter Parker-centered tale he’s crafting. As much a maligned mess as the Hobby story arc becomes (keep in mind, at this point, the “Hobgoblin’s secret identity” subplot won’t be resolved for another 14 years!), DeFalco does what he can with it in the space he’s provided, still allowing Peter Parker not to be eclipsed by a mystery villain or his groovy alien outfit.