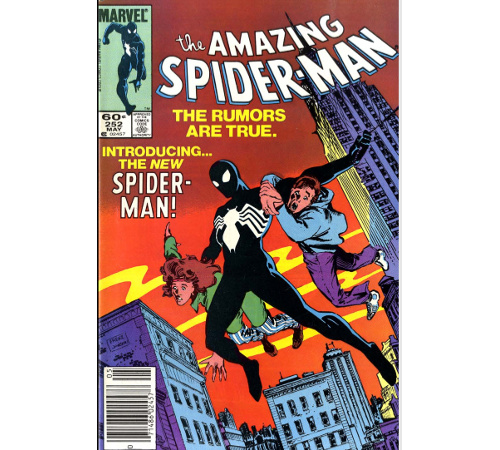 Having covered Marvel Super Heroes Secret Wars last time, we now dive headfirst into Spidey’s main title, Amazing Spider-Man, to see the ramifications of that storied crossover event. At the time, Spidey was the star of two of his own titles, ASM and Peter Parker, the Spectacular Spider-Man (of which we’ve already covered a handful of issues), as well as the central figure in Marvel Team-Up, a title which regularly saw heroes band together to thwart one evildoer or another.

To kick off the crossover story arc known by fans as the “Alien Costume Saga,” I’m taking a dip into Tom DeFalco’s run on ASM. Narratively, the first issue of this alien outfit storyline, ASM #252, begins immediately after the events Secret Wars; but confusingly, this issue was published the same month as the first issue of Secret Wars (May 1984), and it wouldn’t be for another seven issues of Secret Wars that Spidey received his symbiote costume (issue #8, published December 1984). So even though ASM #252 was physically published a little over half a year BEFORE Spidey received his alien costume on Battleworld, the in-universe events of this ASM issue come AFTER the events of the entire Secret Wars series. You with me? Good.

I can hear you in the background: “Can that chatter! Get on with the review!” Well, okay then, pushy. You’re the boss. It’s not like this is my blog or anything... 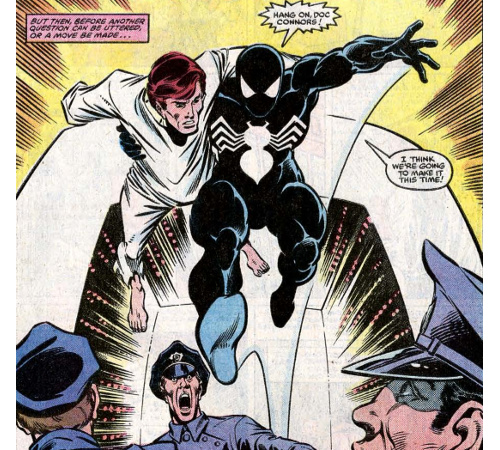 If you’ve read the original limited series or my review (or any number of reviews floating around the web out there), you’ll know that Marvel Super Heroes Secret Wars is a nutty comic. Your favorite heroes and villains assembled! A godlike figure creates a new planet! Nobody trusts the X-Men! Galactus tries to eat everybody! Doc Doom momentarily achieves godhood! Not too deep a story, but certainly one that is entertaining and fun to read every so often.

Out of this series came one huge development for Spidey: a brand-new, black-and-white costume. The brainchild of a Spidey fan, the new costume first appeared in Secret Wars’s eighth issue, replacing the iconic red-and-blue suit after it was torn in battle. This costume crossed over into the regular Spidey titles, making its ASM debut as Spidey lunges from the same portal in Central Park he and several other heroes vanished through a short time earlier.

Tom DeFalco does a generally entertaining job at bringing Spidey back to the real world. We’re shown a Spidey who has traveled to another universe, encountered a god, and (by his admission) was almost stepped on by Galactus; but he now has to come back to a reality where bills pile up, his Aunt May is worried sick (when isn’t she?) because she hasn’t heard from him, and his girlfriend the Black Cat has concerns about their relationship, specifically the secrets she’s keeping from him. On top of that, he can’t sell any photos he took of the action on Battleworld (strangely citing the story about giant aliens and gods on another planet as being unbelievable instead of the possibly more practical reason that Peter Parker was nowhere to be seen on Battleworld) and can’t breathe a word of what happened to anyone. A short conversation with Doc Curt Connors, who was the Lizard most of the time on Battleworld, provides a nice emotional moment between the two men as they discuss their inability to process with other people, particularly relatives, what happened during the Secret Wars. Watching two men, one who can climb walls like a spider and the other who frequently gets turned into a miniature Godzilla (minus the atomic breath), discuss how they have to come to terms with what they’ve seen makes for an engaging conversation. Even heroes and villains react like humans to things beyond their understanding. 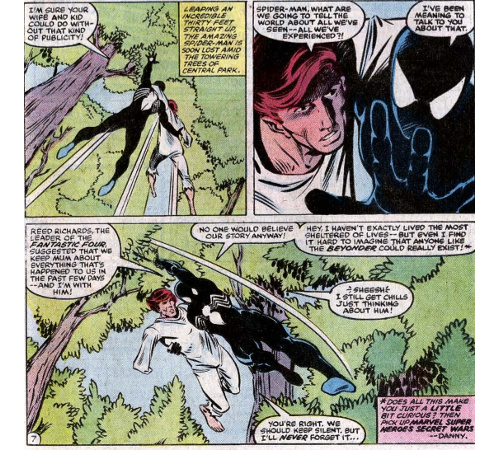 The highlight of the issue is Spidey’s new costume, a suit capable of reacting immediately to his mental commands and mimicking clothing with just a thought. It holds and discharges his camera on a whim, covers him without Spidey ever having to get up and dress, and fires its own webbing. All at the speed of thought. Though otherworldly in nature and vastly removed from the DIY suit and web-shooters Spidey had used for decades’ worth of stories at this point, the costume is a welcome change. Converse to Spider-Man 3’s portrayal of the symbiote-clad hero (as well as the 1990s cartoon and the Ultimate Universe’s version), the suit has no effect on Peter’s attitude, nor does it enhance his abilities (at least not in any significant way). For now, the symbiote is purely a fashionable upgrade to Spidey’s wardrobe with a few neat extra bells and whistles.

I’m unaware of what the plans were for the costume, whether or not it was always intended to be an actual alien, but reading this issue with the hindsight of knowing what will happen in later issues, the costume takes on a slightly more menacing vibe. The costume will gain a personality a little bit later on (check out Louise Simonson’s Web of Spider-Man #1 to see how the suit turns into more of a character), but reading this issue while understanding the costume is an alien makes innocuous actions on the suit’s part feel more purposeful--the alien doesn’t just obey Peter’s commands to cover him, it does so because it’s attempting to bond with him; the symbiote doesn’t just alter its appearance to give Peter swanky new clothes and a suit but because it’s trying to form a relationship with Peter and appealing to him, perhaps to keep Peter from suspecting too much about its true purposes.

As much as I like viewing certain issues as standalone, ASM #252 is difficult to separate from what came before and what will come after it. Entrenched in Secret War’s mythology, the issue is indebted to Spidey discovering his new costume on that planet, and when read with the entire “Alien Costume Saga” in mind, the eventual discovery that the costume is a living organism impacts this issue as well. Spidey’s costume is a cool new feature, but though it may be the focus of the issue, I believe that the future impact caused by the suit (the bell tower scene in WSM #1, the appearance of Venom in ASM #300, etc.) is more important than its debut in ASM here. This isn’t to say that the suit’s eventual “arc” detracts from how entertaining this issue is on its own--as I said, I really enjoy seeing Spidey reflect on Secret Wars with Curt Connors as well as going about daily activities such as buying pizza, bemoaning bills, and developing pictures.

DeFalco also avoids the oh-so-easy pitfall of “demanding” you read Secret Wars or any of the other “tie-in” issues spread across other characters’ series. These days, big events are highly saturated with the crossover mentality, meaning that reading an individual series isn’t enough to get the entire picture of what’s going on. For example, I recently read the Ultimate Universe event titled Ultimatum, and as awful as the story itself is (this universe’s version of the Wasp gets eaten, fyi, just to give a tiny glimpse into how atrocious the whole thing is), what makes it worse is that several other Ultimate series tethered into the story, meaning you never grasped all the angles of what went on. In one issue, Johnny Storm seemingly drowns when a massive tidal wave crashes into New York; in another, he’s alive but unwell, tortured by Dormammu of the Dark Dimension. I assume this transition from drowning to becoming Door-man’s puppet was explained in an Ultimate FF tie-in, but since writer Jeph Loeb fails to explain such a change, Johnny’s status simply jumps from one piece to another without so much as a description as to how. It’s maddening.

Secret Wars doesn’t do that--the story is its own, standalone, twelve-issue crossover event--and though various series across the board detail the fallout and impact of the event, you as the reader are left to your own discretion regarding which series you wish to read and which characters' exploits you wish to follow at the end of Secret Wars. Though DeFalco spends time referencing the events of Secret Wars in this issue, he does so in such a way that only encourages you to read the series, just in case you haven't yet taken a gander and want to get caught up in order to understand ASM better. It isn’t like you have to check out the Fantastic Four, X-Men, or Avengers to understand Spidey’s reaction to the events.

The one place where DeFalco’s writing fails in this issue is a sequence where Spidey interacts with a teenage couple arguing over a date. Butting into the argument, Spidey tells them it’s silly to be fighting over something as petty as a date when they’ve got “so much going for [them].” One of the partners replies that, in reality, they haven't got much going for them and, in fact, their living situation stinks. Spidey comments that there are places far worse that a dilapidated New York neighborhood, insinuating that fighting villains on an alien planet millions of miles away is worse than living in poverty all the time. Spidey then takes the couple to the top of a skyscraper, giving them a view of New York as he sees it and convincing them that, hey, maybe things aren’t so bad after all. 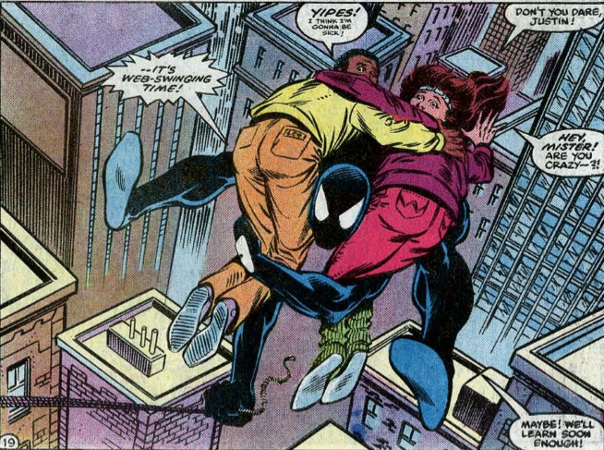 In an issue that has so far done a remarkable job at inserting realism into its story, this section feels unfortunately tone-deaf. Spidey’s argument that New York is wonderful and life is good because these two kids were never transported to the other side of the galaxy, despite the fact this couple live in a crummy neighborhood with few prospects and a difficult daily life, comes off as surprisingly unsympathetic. He essentially pats the teens on the head and reminds them that, no matter how bad it is, things could be worse, I guess? The scene lacks practicality, it lacks empathy, and it comes across as DeFalco’s way of injecting a nice social or moral message where one is unnecessary. If Spidey was actually being a jerk, I’d argue this was DeFalco’s subtle way of telling us that the alien costume is affecting his outlook and attitude. Spidey doesn’t offer any actual help, and his encouragement falls flat.

Despite this, ASM #252 is well worth a read. If you’re interested in this era of Spidey history--if you want to know what happens after Secret Wars, or if you want to see the debut of Spidey’s brand new costume and the stories it ushers in--this issue is your gateway. This does mean that the impact of the issue lies more in its premise than in the actual storyline DeFalco generates, but even there, segments with Doc Connors and Peter beginning to rehabilitate to normal life (or what counts for “normal” in a Spider-Man comic) make for an engaging reading experience. We’ll be taking future looks at the black costume, but it’s good to know we’re off to a decent start.