Spider-view: “Where, Oh, Where has My Spider-Man Gone?” (Alien Costume Saga, Part 3) 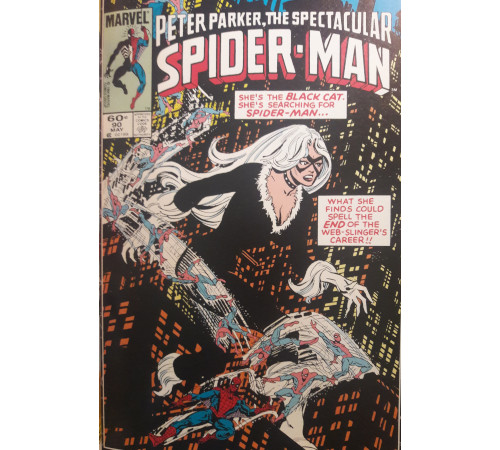 This issue marks the first Black Cat-centric story we will be examining on this site. Debuting in Amazing Spider-Man #194, Felicia Hardy is the daughter of a cat burglar who turned to crime herself, her illegal pursuits leading to a run-in with our webbed hero. From that point, Felcia’s history, especially with Spidey, has become a long and complicated one, full of redeemable and irredeemable moments and bordering on tragedy at moments, but unfortunately one I’m not fully invested in. Let me offer a brief rundown based on what I know:

The feline-inspired Black Cat actually began her comic book existence, not as a thief like her father, but as a daughter devoted to him; her first appearance saw her don the Black Cat persona to liberate him from prison. After this, she turned to thievery and ran afoul of Spidey, quickly finding herself attracted to him in a fashion similar to the relationship between Batman and Catwoman. Eventually, Black Cat was granted amnesty and “gave up” her life of crime after aiding Spidey against a gang war between Doc Ock and the Owl where she was very nearly killed. This, plus other incidents, proved to her that, as an extremely athletic but otherwise very human costumed crime fighter, she stood little chance facing down the superhuman enemies Spidey regularly went toe-to-toe with. Seeking powers of her own behind Spidey’s back, Felicia unknowingly made a deal with Wilson Fisk, the Kingpin of Crime, to grant her more superhuman agility and a “bad luck” ability, which causes random mayhem against those who attempt to cause her harm.

That summary brings us to today’s issue. Feilcia has powers, but they’ve come with a price tag, and the Kingpin has made it very clear he intends on collecting. 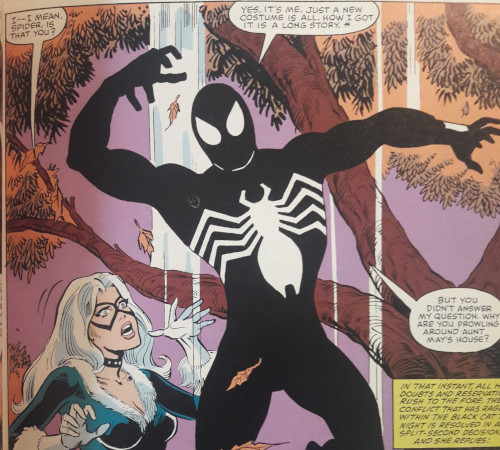 Published the same month as the first two chapters in the “Alien Costume Saga,” PPSSM #90 takes place right around the same time, if not slightly before, (ASM 252), which debuted Spidey’s new black costume. The timeline is kind of wonky here, and if you read this tale in relation to ASM #252, the two don’t exactly line up. A couple people Felicia converses with in this issue--Police Captain Jean DeWolff and Avengers member the Vision--each mention the bizarre circumstances surrounding the missing heroes, who were transported to Battleworld by the Beyonder in Secret Wars; if the heroes have already arrived safely back in New York, as we witnessed in ASM #252, by time this issue debuts, then various characters are not aware of that development. Even J. Jonah Jameson at the Daily Bugle and Mrs. Muggins, Peter’s landlady, mention they haven’t seen Peter in days. So we can surmise that, at least by time this issue begins and Felicia starts her “investigation” for the missing Spider-Man, our heroes are still off-world.

However, the events of this issue seem to take place in the span of a single evening and end with Felicia bumping into Spidey, marking the first appearance of his black costume in PPSSM. If we surmise this issue takes place the same evening Spidey is transported back to New York from Battleworld, we run into a potential contradiction: in ASM #252, Felicia visits Peter’s apartment shortly after he leaves. This happens very shortly after Peter is returned to Earth from Battleworld. One could guess this scene mirrors a sequence in PPSSM #90, where Felicia drops in on Peter’s apartment, fails to find him there, and leaves him a note. Yet the scenes each read differently and appear to be two distinct visits, which doesn’t make sense given Felicia’s over activities during the evening. If these scenes, the one in ASM #252 and the one in PPSSSM #90, are meant to parallel each other, they don’t work as fluidly as they could; even if they’re intended to be separate incidents, they still don’t work well in the timeline.

I probably shouldn’t be harping on this, but for someone who’s interested in the timeline aspects of the series and is reading the “Alien Costume Saga” as a whole, I guess I just noticed the apparent inconsistency. Other parts of the issue feel off as well--one of Felicia’s hands is drawn incorrectly, showing a flesh-colored hand instead of a white glove, and a couple of muggers sneaking up on her accuse her of “cross[ing] our path” when one of their buddies is injured, when Felicia did nothing at all. Minor complaints like this just point to a general sloppiness pervading the issue, little pieces here and there that don’t mesh well together. 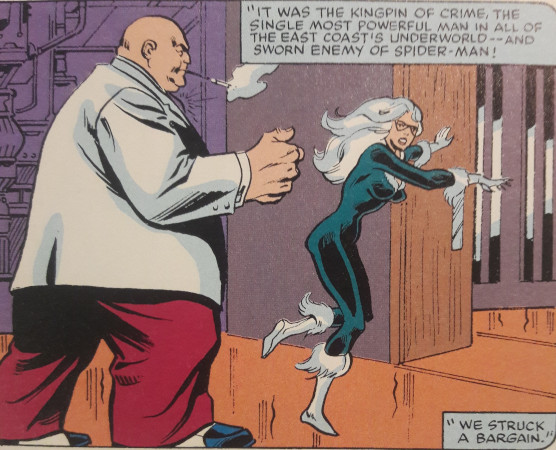 Milgrom’s story, however, is a nice change of pace. By redirecting focus, Milgrom is able to explore a story through Felicia’s perspective rather than Spidey’s. Taking advantage of Spidey’s recent disappearance, Milgrom gets into Felicia’s head and tugs at her thoughts--the guilt she feels receiving her powers from the Kingpin, her struggle in deciding whether or not to open up to her “Spider” about her new abilities, a momentary resolve to be honest with the hero. Felicia’s emotions are up and down this whole issue, a combination of worry for her missing boyfriend and concern about the secrets she’s been keeping from him.

Milgrom also provides a decent showcase for her new abilities; attacked by some muggers, Felicia barely lays a hand on them. Her “bad luck” abilities affects the probability of harm befalling her would-be-assailants, leading to clever visual gags like a mugger’s gun falling apart in his hands or a moron getting tripped up by a sewer grate. The “bad luck” powers are actually an ingenious ability for someone named the Black Cat to have, tethering not only into a popular colloquialism about her namesake but also giving her an ability that extends beyond her enhanced athletic prowess. Milgrom, as both writer and artist, has full command of the scene, crafting it creatively as the mayhem builds. 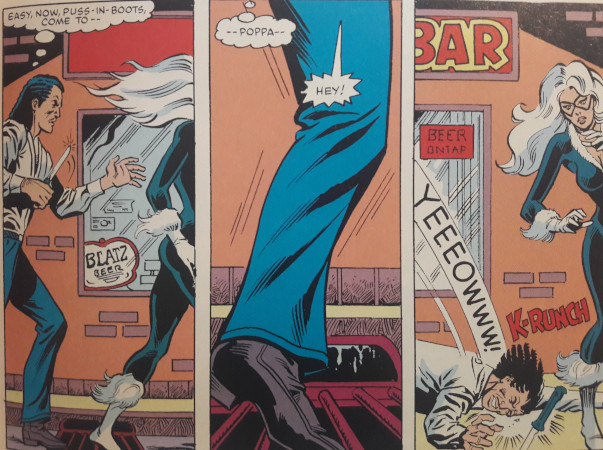 What doesn’t work as well in this story is how Felicia goes about looking for the missing Peter Parker. She travels to five different locations, with only two of them making much sense. Early on, she visits Captain Jean DeWolff to see if she knows anything; DeWolff replies negatively, hinting at her own infatuation with Spider-Man (which will come up in a later, celebrated storyline about the police captain) and referencing the disappearance of the city’s heroes. Felicia will also try Avengers mansion, which leads to a tiny moment between her and Scarlet Witch where Milgrom makes a cool connection between Cat’s “bad luck” powers and the Witch’s own probability-altering abilities. Vision, unfortunately, knows nothing regarding Spidey’s disappearance but appeals to her to join the Avengers, despite her criminal background, reminding her that members Hawkeye, Wonder Man, Scarlet Witch, and Quicksilver were all “villains” prior to joining the fabled team. The argument actually makes a lot of sense.

Felicia goes a tad off the rails when she visits Peter’s apartment, the Daily Bugle, and Aunt May’s house in Forest Hills, running into Mrs. Muggins, the Bugle staff, and May Parker. Both women and J. Jonah Jameson give Felicia a verbal drubbing, but Milgrom fails to make a larger point: Felicia’s utter foolishness in exploring those places. Perhaps he intends Cat to be in such a state of panic that she isn’t aware of how inane her actions are, but this isn’t spelled out. Felicia comes across as fully coherent and in control of her actions, never questioning the idiocy of showing up at Peter’s apartment or his place of employment. So though it’s nice to get a story from Cat’s perspective, and though Milgrom nicely shows us just how creative her newfound powers can be, Felicia’s character takes a bit of a hit when she isn’t thumping criminals. Can she hold her own against the criminal underworld? It looks that way...but being a better combatant doesn’t make her wiser. 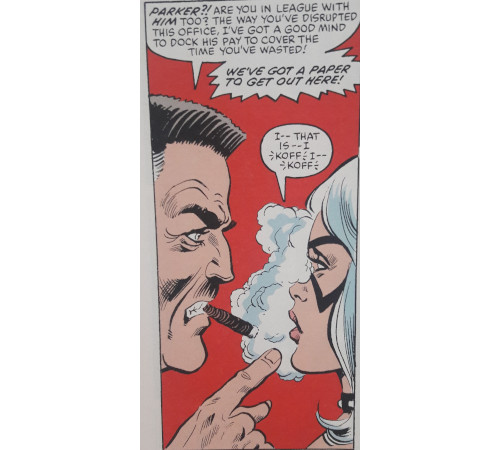 The plot point that DOES work, fortunately, is how Milgrom tethers this issue to the overarching Secret Wars event. Captain DeWolff references Secret Wars while chatting with Felicia, bemoaning the sudden vanishing of so many costumed types. This exchange wonderfully does what a tie-in comic should do: it teases the reader about the primary event without overselling it. No box appears demanding you “Buy Secret Wars #2! Out now!” You’re not beaten over the head with how you have to know the larger story to fully understand the pieces discussed here. Remaining in character, DeWolff very quietly expresses her concern and briefly discusses how the disappearances have led to a rise in criminal activity, imparting some great info on the cause-and-effect relationship between the heroes’ disappearances and events in the rest of New York. While anyone reading Secret Wars will be fully engrossed in our heroes’ plight, a small scene like this allows readers to better understand how circumstances in the “real world” are simultaneously being impacted.

PPSSM #90 ends up being a middling issue, then--there are places where Milgrom succeeds and places where he fails. His interest and investment in Black Cat as a character is noticeable and adds some decent characterization to the series, even if some of her actions hurt her character rather than help it. And though this issue ends up being a nice tie-in to the larger Secret Wars limited series, it doesn’t fully gel with the other tie-in story going on in ASM #252, which is an issue I believe could have been resolved quite easily. I don’t know if that boils down to poor writing or poor editing, but the minor errors and odd choices on Felicia’s part end up detracting from a story that, with some more forethought, could have capitalized completely on its characterization and Secret Wars connections.