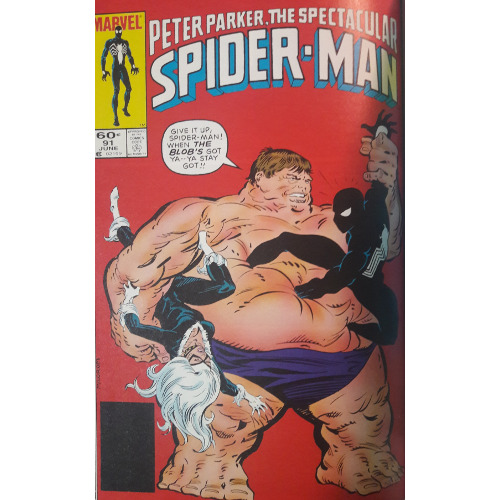 Al Milgrom’s run on Spidey’s secondary title, Peter Parker, the Spectacular Spider-Man, continues as we dive deeper into the arc known as the “Alien Costume Saga.” As we saw the last time we explored this series, Milgrom had penned an issue centered on Felicia Hardy, the former thief known as the Black Cat and Spidey’s current love interest (and by “current,” I mean “as of 1984”). More soap opera-style than its sister title, Amazing Spider-Man, at the time, Milgrom ended the last issue with Spidey literally dropping in on the Cat as she snooped around Peter’s “old haunts” looking for her missing boyfriend.

Questions abound as we open this issue--how does Black Cat react to Peter’s new costume? How does Peter confront Felicia about her sneaky investigation? And why is the timeline all screwed up?

I mentioned some of the confounding timeline issues in my review of the previous Spectacular issue, PPSSM #90, and how it seemingly conflicts with the events of ASM #252, where the black costume debuted. Chief among those complaints was the idea that PPSSM #90 seems to start right before Spidey returns to New York from Battleworld in ASM #252 but ends after the events of ASM #252, with what seems like not enough time for all the circumstances in both those issues to occur sequentially.

Milgrom runs into a similar problem here. Given the ending of PPSSM #90 (Spidey drops in on the Black Cat) and the opening of PPSSM #91 (Spidey and Black Cat go gallivanting across the rooftops of New York), readers could easily surmise that this opening happened immediately after Spidey finds the Cat in the preceding issue. However, Daily Bugle editor-in-chief Robbie Robertson later comments on photos Peter took at a football game, which happened in ASM #253, an issue that certainly takes place a day after ASM #252 at least.

Thus, we have a timeframe the writers will have you believe happened, based on the issues we’ve read so far:

-As a side note: writer Christopher Priest notes that Spidey's appearance seems to have happened around lunchtime of that day (per MTU #141) 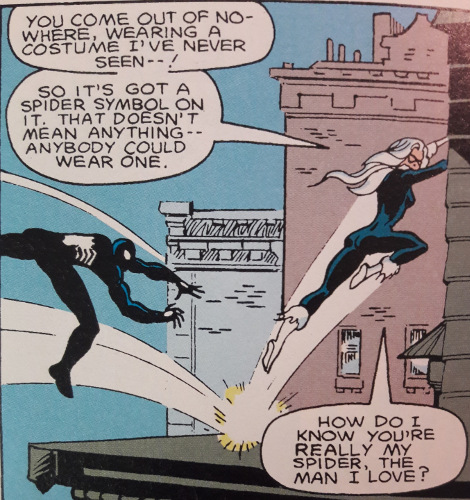 However, if you read through these initial issues of the “Alien Costume Saga” as they are presented in that timeframe, as I’ve already indicated, the timelines do not match up. I don’t have much of a problem with Spidey appearing in New York the same night Felicia begins looking for him, but I don’t agree with MTU #141. Christopher Priest’s explanation of Spidey’s return, unfortunately, seems to contradict DeFalco’s interpretation of events in ASM #252, as the time between Spidey’s reappearance and his reaching home is indicated to be brief. By this time, if Ron Frenz’s backdrops are to believed, night has already fallen, meaning that either ASM #252 or MTU #141 are incorrect in their details. As I’ve already espoused upon, Felicia’s own activities during the day seem to conflict, depending on the writer.

As PPSSM #91 feels meant to be read immediately following PPSSM #90, it’s far more believable to assume that this issue begins right after the events of the issue before it, meaning that we’re still focusing on events that happened during Spidey’s first night back from Battleworld; thus, if we interpret the issues this way, he would have had no time to take photos of a football game or handle Nesters’ dealings with the Rose, or even distress Aunt May with the news of dropping out of his graduate studies (which Milgrom brings up here). Sure, one could surmise that PPSSM #91 takes place a day or so after the Nesters and Aunt May incidents, but I don’t think Milgrom wants you to read the story this way, considering how well the opening pages of PPSSM #91 proceed so naturally from his “cliffhanger” in PPSSM #90.

The point to all this is that, if you’re reading the “Alien Costume Saga” chronologically, you’re going to be facing a few bumps in the road. Honestly, this "wonky timeline" issue is only something I caught on to recently during my second readthrough of the “Saga,” but it’s been distracting enough for me to want to mention it. The problem points to, perhaps, a lack of communication on the part of our writers (and possibly editors) and highlights one of the dangers of a “crossover” story like this: in a tale strung between various series and dependent on all those pieces to form the whole, it’s easy to misplace those pieces or get details wrong as you’re trying to untangle who creates what plot point, when that plot point occurs, which issue particular events take place in, and other elements necessary to crafting the story. If mishandled, you could end up with a story that seems jumbled and out of place. 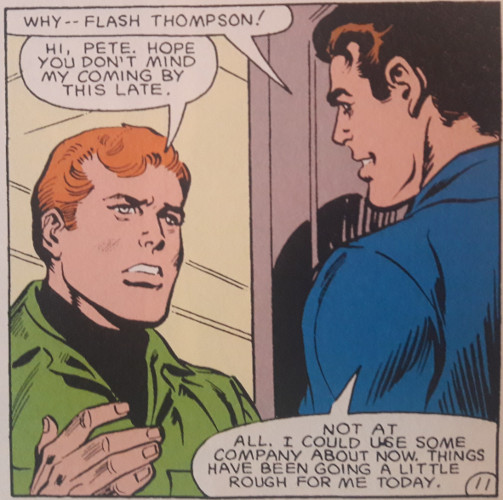 All that being said, the wonky timeline doesn’t detract from one primary piece that Milgrom gets right: addressing the Black Cat problem from the previous issue. Milgrom takes a bit of time to gloss over Peter’s new costume and Felicia’s reaction to it, instead focusing more on how Peter interacts with the people the Cat bumped into during the previous issue. Both Mrs. Muggins and the Daily Bugle staff heckle Peter about the costumed company he apparently keeps; later, Peter is forced to hurry a somewhat distraught Flash Thompson out of his apartment after the former bully seeks some much needed guidance, as Peter sees Felicia at the window. Through these interactions, Milgrom is sowing seeds of discord and tension between the Spider and the Cat, and though he doesn’t answer my own inquiry as to how Felicia could appear so foolish (or what her in-character justification would be), we at least know why Milgrom is writing her this way.

Nevertheless, despite these tensions between the Spider and the Cat, Milgrom still wants you cheering for them all the way. This desire is highlighted by the issue’s third act, where both Spidey and the Black Cat get into a scrape with the X-Men villain known as Blob. Milgrom inserts a neat bit of continuity here, as the Blob is tearing his way through New York after the supposed death of his fellow mutant and close friend, Unus the Untouchable. Milgrom references Marvel Fanfare #7, in which the duo faced the Hulk, a nod I appreciate since I recently read that issue and can visualize the adventure Milgrom is mentioning. 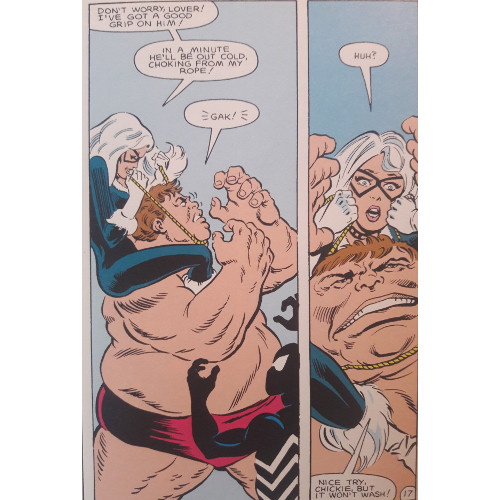 The tussle allows Spidey and Cat to work as a pair to bring the Blob down, even if they don’t land the finishing blow. For a moment, Spidey’s concerns are assuaged--though his worries about Cat prowling around the Bugle and his Aunt May’s house aren’t quite addressed, his bigger concerns about Felicia’s ability to handle herself in a fight are smoothed over. Perhaps wisely so, Milgrom leaves the question about Felicia’s foolhardy (or fool-Hardy?) antics hanging in the air. This will, if I recall correctly, be brought up later, but for now, I like that Milgrom addresses one of the two large wrinkles in the Spider-Man/Black Cat relationship. But now that Spidey can trust the Cat to hold her own in a fight, can he trust her as a person? Despite what appears to be a happy ending for the pair and a bit of forward momentum in their relationship, this issue’s final page nudges them towards the edge of a different precipice, leaving Felicia to wonder just exactly how, if ever, to tell her boyfriend about her powers...and where they came from.

Milgrom’s focus on the Spidey/Cat dynamic makes for some engaging storytelling, even if it dips into soap opera-ish territory from time to time. I know I’ve read that fans’ perception of Felicia took a nosedive after Peter revealed his secret identity to her, with her insistence that Spidey remain Spidey only when in her presence becoming an unfortunately grating staple of her character. Milgrom touches on this, but he smartly decides to focus on other points of contention between the couple. Still, an engaging plot can’t completely smooth over the frustratingly jumbled sequence of events and the poor storytelling woven in-between the issues that PPSSM #91 is intended to buoy. The messy timeline doesn’t necessarily hurt Milgrom’s story in this issue, but it certainly makes keeping events straight confusing and turns this portion of the “Alien Costume Saga” into more a chore than it should be.