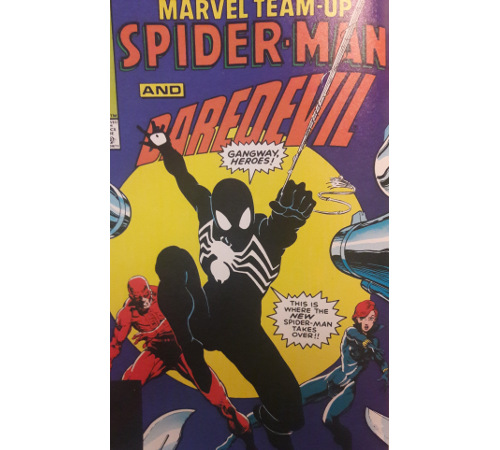 In our last post, we examined the first ever Spider-Man issue (Amazing Spider-Man #252) to feature the hero’s brand new black costume that he discovered on Battleworld during the event known as Marvel Super Hero Secret Wars. Writer Tom DeFalco crafted an engaging issue that saw Spidey triumphantly return to Earth with Doc Curt Connors in tow, with the hero doing his best to get back into the swing of regular life while adjusting to the somewhat bizarre nature of his new costume. The mystery of the costume will develop in further installments of this “Saga,” but for now, all we need to know is that Pete’s sporting some new threads as the friendly neighborhood Wall-Crawler.

Today’s issue takes place in a series called Marvel Team-Up, which was a quasi-Spidey title predicated on the conceit of having Marvel’s heroes join forces; this was usually accomplished by having Spidey team with another costumed adventurer or two, and though I haven’t read much of the series as a whole, the few issues I’ve perused have been moderately entertaining; one tale in particular features a fantastic time travel adventure where Spidey works with Iron Man against Kang the Conquerer, but that’s tangential to this post. Though our Webbed Wonder didn’t take top billing in every issue, he sure found himself starring in many of them.

We’ve reached a point where the series is on its last lap, lasting only until issue #150. Until then, we’ll fondly take a look at these final ten issues before MTU takes a gracious bow.

Note: Much like the Artist formerly known as Prince, Jim Owsley had his legal name changed to “Christopher Priest” around 1993. I’ve decided to credit him by his former name in the above description, as that is the name printed in the issue. But for the rest of the post, when I refer to him, I will call him by his current given name.

Note 2: If you ever get the chance, please check out Priest’s work on Black Panther. His five-year run on the title is highly entertaining and a huge influence on the character’s first solo film in the Marvel Cinematic Universe. 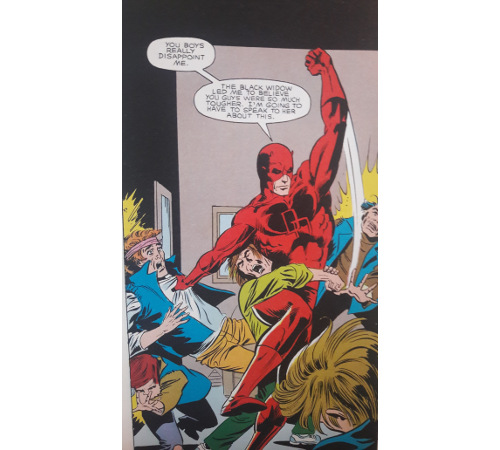 “Blind Justice” is actually the second part of a two-issue story arc, the first chapter taking place in the preceding issue, MTU #140. Unfortunately, since the "Alien Costume Saga" trade paperback I own that collects issue #141 fails to include #140, I can only speak to the quality of the second piece. I can’t wholly fault the editors of the TPB choosing to forego including Part 1, since issue #141 is the first MTU issue featuring Spidey’s new costume; but even though displaying the alien costume is the focal point of the whole collection, it’s a jarring experience getting dumped into the middle of a story.

Priest makes up for this with some nice expository dialogue to bring us up to speed: Matt Murdock, blind lawyer and alter ego of the Man Without Fear himself, is representing a young man falsely accused of murdering a pawn shop owner in the previous issue; when another potential killer that Spidey clocked in issue #140 also claims innocence--and Matt, with his super duper hearing, confirms he’s telling the truth--Daredevil is forced to track the real murderer down. Black Widow and Spidey also become entangled in this mess, with the latter feeling responsible for the real murderer still being at large; interestingly, Priest has DD play up similar guilty feelings for a brief second, creating an amusing if unspoken bond between the two street-level heroes. 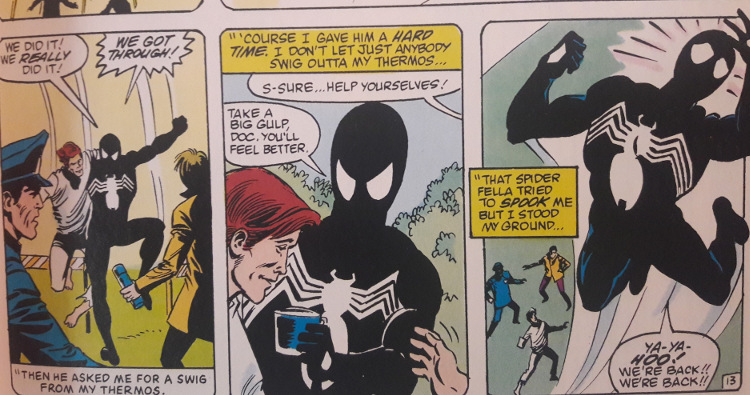 Time is a funky thing in this issue, especially if you read this tale immediately after checking out ASM #252, where the black costume debuted ahead of its appearance in Secret Wars. “Blind Justice” starts shortly before Spidey and Curt Connors arrive in Central Park from Battleworld, and Priest includes snippets of their arrival from ASM #252 to give you a sense of when this story takes place exactly. Typically, having recently perused ASM #252, I would get a tad bored reading the same scene that I had just experienced in a different comic. Entertainingly, however, Priest sets the scene up a flashback, presented by a witness whose perspective is a bit different than what you’d glimpse from ASM #252. Even in his exposition, Priest still finds a way to entertain, taking a chunk of info that another writer may have just plopped into the middle of the comic and let remain static and turning it into something decently readable.

Priest’s dialogue is his greatest strength; this is true for his early 2000s Black Panther run, meaning I enjoyed seeing that a comic from the 80s written by Priest could be as amusing with its characters as his stories from 20 years later. Even supporting characters come as across as unique, from a tough-talking cop who threatens a crook with jail time, to Daily Bugle reporter Ben Urich complaining about an assignment (which is brought up later in the issue as a kind of a running gag), to Black Widow referencing her Russian background, to a seemingly congenial old man who you can tell is hiding something by a brief verbal stumble. Priest fashions his words in a way that makes you believe real people are talking, not just cookie cutter characters thrown slapdash onto the page to move the story along or offer a line of dialogue because the writer wanted to throw something additional into the panel. 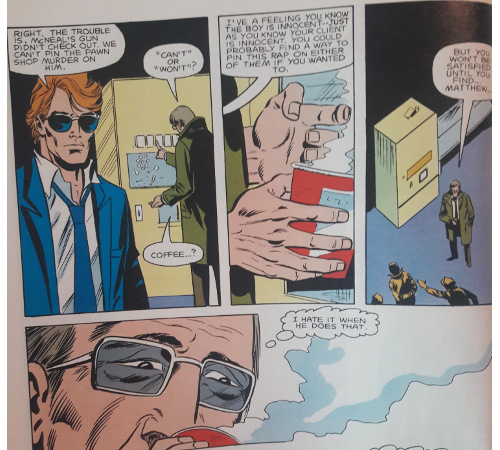 Humor, though an odd notion to find in a comic starring Daredevil, makes itself known here. Priest inserts the aforementioned gag with Ben Urich but also makes the veteran reporter grunt in frustration when both Matt Murdock (who Ben knows to be Daredevil) and Spidey leave in the middle of a discussion, similar to a long-running gag between Batman and Commissioner Gordon. And Priest taps into something that will become a running joke through several stories during this time period: people don’t seem to recognize Spidey in his new costume, as they’re caught off-guard by the color change. Priest actually takes this one step further by having a character realize the guy in the black suit and our Friendly Neighborhood Wall-Crawler are (shocker!) the same man, with Spidey uttering an exasperated “At last!”

Though written well, the story itself comes off as a bit “one and done,” at least as far as the MTU series is concerned. Priest does a nice job tying up the threads, as far I know, from the previous issue, but introduces certain ideas without examining them deeply, referencing previous stories, or alluding that these ideas will shape future stories. At one point, Daredevil makes a deal with the Arranger, one of the Kingpin’s flunkies, for information; both Black Widow and Spidey are visibly frustrated by this choice (why would Daredevil, who is so often at odds with Wilson Fisk, seemingly work with the infamous crime lord?), though I have no idea whether this becomes a conflict later on down the line or served as Priest’s way of injecting temporary tension into the issue. I know that a later ASM story arc written by Priest, “Gang War,” will feature both the Kingpin and DD, but I don’t remember enough about that storyline to conclusively say or even predict that Priest carries over threads introduced here. As it stands, Priest tries to throw certain concepts at the wall--like asking the question if justice is really justice when the alleged good guys end up working with the villains to see a positive outcome--but for now, they don’t have the sticking power of Spidey’s webbing.

An offbeat issue to read right after focusing on stories where Spidey battles cosmic entities and starts unraveling the mysteries of his new costume, Priest’s tale plants us firmly back into the street-level heroics Spidey is famous for. After seeing our hero go off-world, it’s a nice change of pace to have him return and adapt to a normal lifestyle. Like with Tom DeFalco's writing in ASM #252, you feel like Priest works to feed in some sort of moral message about justice, but also similar to DeFalco’s efforts, Priest’s attempts come right at the end of the issue and don’t fully expound on the message he’s grasping at. Social commentary has been done better (but then again, it’s also been done worse!), but a slightly awkward ending is a small price to pay for an issue that is otherwise engaging.