Tom DeFalco gives Peter, and readers, ideas to mull over even as a supposedly impactful revelation falls flat 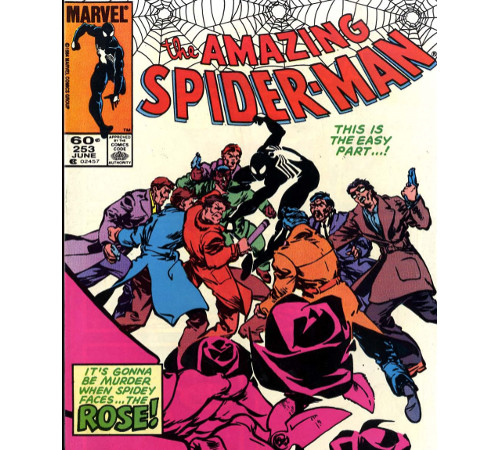 As we continue our journey through the days when Spidey sported his dark new duds, we re-enter the world of Tom DeFalco’s time on Amazing Spider-Man for a one-off issue that, surprisingly, relegates the development of the black costume to a little corner. DeFalco has other interests in mind here, his primary duty being debuting a new supervillain to add to the already packed stable of Spidey’s rogues gallery.

DeFalco is joined this time around by artist Rick Leonardi (whose work we already examined in the four-issue Cloak and Dagger limited series by Bill Mantlo), who will have an unfortunately short time on the book; much of ASM’s “Alien Costume Saga” contributions will be penciled by Ron Frenz, who detailed ASM #252 and additional chapters. Still, it’s nice to see mid-80s work from Leonardi, whose later art on Spider-Man 2099 during the 1990s wows me to this day. Much like how I commented on John Romita Jr.’s artwork in the classic two-parter, “Nothing Can Stop the Juggernaut,” much of my appreciation for Leonardi’s efforts on this issue stem from noting how his work matures over the subsequent years between these 1980s ASM issues and his time on 2099.

With a phenomenal artist in tow, DeFalco sets off to create the latest chapter in the life of Peter Parker.

I remarked in my very first Spider-view post that, during the 80s, Peter Parker was attending graduate school. A few issues prior to this tale, Peter made the decision to drop out of his graduate studies to divert his funds to pay for the Black Cat’s medical bills after she was gravely injured during a gang war between Doc Ock and the Owl. Problematic as that is given Peter’s history with the Cat and his typically dedicated attitude towards his studies, one other problem looms in the foreground: Aunt May doesn’t yet know about Peter’s decision.

She finds out this issue.

DeFalco crafts engaging characters and dialogue throughout this entire story, but the one area where he rushes the scene is this pivotal moment where Peter tells Aunt May the dire news. This is built up as a huge moment that comes crashing down around Peter as May responds with absolute heartbreak. And it’s over in six panels. Aunt May's distressed reply is echoed by her then-fiance Nathan Lubensky. They holler a bit at Peter, leaving the young man guilt-ridden. There’s no argument, there’s no back-and-forth. A couple of people scream at Peter over this rather monumental announcement...and that’s it. 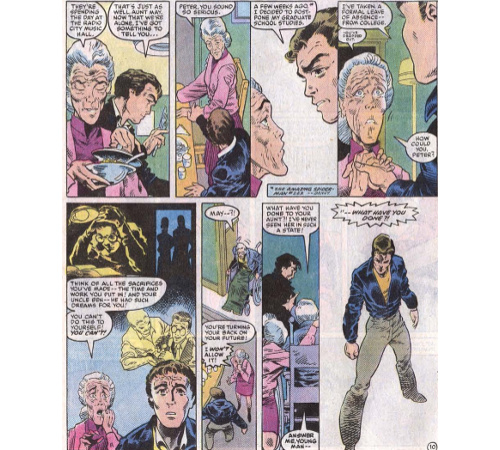 Peter’s response to this tirade, delivered while he swings his way through the city, is surprising given his general nature. She’s usually so supportive! he thinks, pondering his Aunt May's reaction. I never knew how much my college education meant to her! His remarks feel sorely out of character for Peter, and I have a difficult time rectifying how Peter, whose aunt has been like a mother to him ever since he was orphaned and has constantly encouraged his studies time and time again after his Uncle Ben was killed, would ever think she’d support the idea of him just dropping out of college. Plus, when you realize he left college without seeking her advice first, his decision becomes even more irresponsible. I get it, though--you want your hero to be flawed, have lapses in judgment, make mistakes that prove his or her humanity. But the way DeFalco writes the scene, having Peter defend himself by somehow thinking Aunt May would support him in this, makes Peter look beyond flawed, almost downright stupid. And May didn’t raise no dummies. Or, no total dummies.

Looks like it’s no more wheatcakes for Mr. Parker for a while.

DeFalco’s venture into subplot territory is much more firm, serving as a nice parallel to the primary tale being told. DeFalco introduces us to the Rose, a masked criminal overlord on the rise. Not much is known about the Rose at this stage, other than he has a hand in manipulating fictional NFL team the New York Mammoths by blackmailing their quarterback, Ray Nesters, to throw games. DeFalco weaves Ray's tale as paralleling Peter’s in interesting ways--Ray’s a man with skills and abilities that he's throwing away, DeFalco’s way of commenting that Peter may be throwing his own life ambitions away via his decisions. Much of the issue focuses on both Ray and Peter, keeping the Spider-Man action in the background.

When Spidey does appear, it’s to challenge the Rose for the first time. The gang lord doesn’t come across as all that intimidating, and though his secret identity will become a sticking point in later stories (several of which won’t take place in ASM), the mystery isn’t harped upon in this issue. Designed fantastically by Leonardi and given a wonderful motif in the form of roses, this villain, much like his namesake, is more prickly than he appears. DeFalco successfully makes the Rose a minor threat without ever having to say much. A trashed apartment leads Ray, and later Peter, to realize Ray’s brother has been kidnapped by the villain, without DeFalco explicitly spelling it out for us. Rose doesn’t go on and on about his big plans; instead, he makes phone calls and orders men around. Rose actually later comments that he abhors physical violence, indicating he’s less of a brawler than someone like Wilson Fisk and far more of a behind-the-scenes manipulator who will get his army of hoodlums to act in his name.

With help from Leonardi’s visual acumen, DeFalco manages to weave several “show don’t tell” moments into the story, aside from the trashed apartment. A scene where Ray’s brother goes to answer the front door seems innocuous until you find out he’s been kidnapped; Peter discovering a vase with a rose in Ray’s apartment indicates the culprit behind the kidnapping. A scene between Robbie Robertson (who has assumed editor-in-chief duties at the Daily Bugle) and Peter, where Robbie comments on Peter’s poor technique in snapping sports-related photos, almost alludes to the fact that Peter may just be out of his element when it comes to photographic subject matter other than Spidey. This moment in particular is a nice challenge to both Peter and the reader: potential moral issues aside, "Peter Parker as Spider-Man photographer" has long been synonymous with the character. But Robbie's indication is that Peter may not be quite the photographer that he's always appeared to be, that may he may have been coasting on tricks and technical know-how in order to snap awesome Spidey pics, that when it comes to other subjects, he just doesn't possess the all-around skill necessary to adapt himself. It's an engaging, and perhaps startling, notion, striking at the heart of a core characteristic. It's not a question that gets bounced around a lot during the rest of the "Saga," but it's an idea which intrigued me nevertheless. 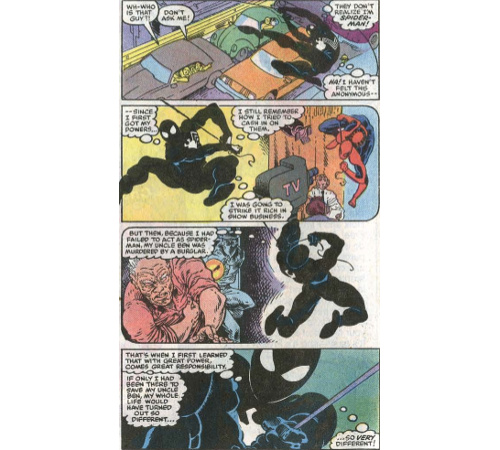 One small area where DeFalco "shows" more than he "tells" happens near the issue’s beginning, in a scene where Peter compares his new “anonymity” in his black costume (reflecting that people fail to recognize him as Spider-Man in his new garb) to back when he first started out as a wrestler and TV personality trying to cash in on his newfound powers. An apt comparison for DeFalco to make, but one that gets stretched when Peter goes on to also reflect upon his Uncle Ben’s death and the lesson Peter learned from that tragedy. Hugely important as that life event is for Peter, DeFalco tosses in a reference to it almost randomly, with little connection to the rest of the tale. Perhaps you’re supposed to draw the parallel between Peter’s uncle dying because of his mistake and Ray’s brother getting kidnapped because of the quarterback’s errors; if that is the case, it’s not obvious enough to make you go “Okay, I see what DeFalco’s doing” nor is it subtle enough for you to think back to it and realize what DeFalco was trying to get at, if anything. Once you also understand that DeFalco is trying to draw links between Peter and Ray’s current predicaments and not necessarily Peter’s past mistakes and Ray’s current ones, the idea loses any potential emotional power. The statement is sort of just...there...kinda hovering in limbo, seemingly disconnected from the rest of the issue.

Minor qualms aside, DeFalco really is at the top of his game on ASM at this time. Peter Parker is front-and-center throughout this entire issue, sharing space with a young man very similar to himself. Peter Parker, the Spectacular Spider-Man may largely focus on the ensuing tensions with Spidey’s relationship with the Black Cat, but it’s ASM which continues to propel Peter’s character and story forward. Somehow, DeFalco finds time to juggle these various strands--Peter’s time as Spidey, the conflict with his job and studies--and though not all scenes are created equal (such as the “I’m quitting college” revelation, as noted above), others are handled deftly. The Ray Nesters/Peter Parker parallels are just icing on the cake, and DeFalco makes these metaphorical underpinnings clearer at the issue’s end in a segment that lays out the similarities without painfully making them obvious. The reader is invited to look at Ray’s mistakes and ascribe them to Peter, wondering if seeing a young man throw his skills away will make him see his own life through a more critical lens.