The vigilante duo's first standalone series broadens their world and establishes Cloak and Dagger as people, not just heroes 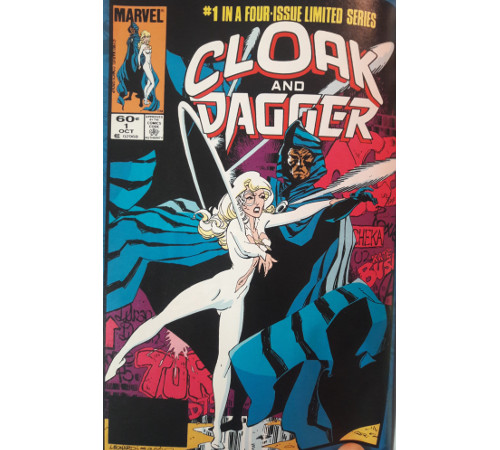 A year and a half after first being introduced and becoming semi-recurring characters in the pages of Peter Parker, the Spectacular Spider-Man, Cloak and Dagger were given their first limited series, a four-issue tale written by their creator, Bill Mantlo, and illustrated by Rick Leonardi (whose work we will later examine in the pages of Amazing Spider-Man and Spider-Man 2099). Freed from simply serving as side characters in Spider-Man stories (issues in which they, admittedly, often took center stage and were given decent development by Mantlo), Cloak and Dagger could explore their own lives, duties, and pasts in a series all their own.

Together, we’ll look at this exploration and see how it builds on the characteristics and backstory Mantlo has already planted. 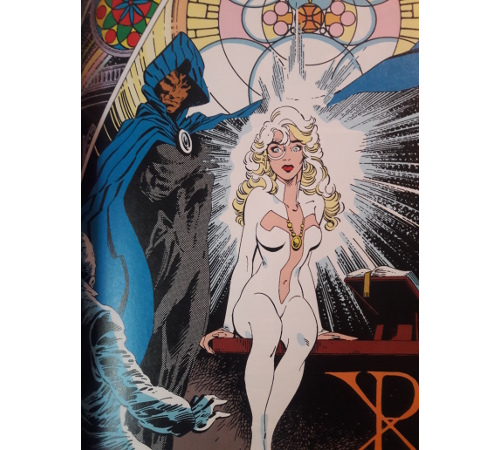 If you were to open the first issue of this series immediately after reading Cloak and Dagger’s most recent appearance in PPSSM #81- 82 (the issues where the Punisher comes across as a demented psychopath), your eyes would be drawn instantly to the art. The clean, standardized pencils and colors that gave PPSSM an almost comical feel are replaced with muted backgrounds, a grim setting, and Rick Leonardi’s lined, realistic faces. This isn’t a New York where Spidey’s gonna just swing in and save the day from the Looter, y’know. This is a world where a priest is catcalled from a street corner, where kids are introduced to a life of drugs, and where a disgruntled ex-pharmaceutical employee has no qualms about switching medicine with poison.

The artistic grimness is matched by Mantlo’s dialogue and narrative, which sees the two vigilantes prominently switch agendas from simply taking out drug dealers to saving kids from poison-spreading madmen. The threats feel real in these issues, from men who mercilessly yank kids off the street to the aforementioned murderer who easily replaces a bottle of legitimate medicine with his counterfeit toxins. A mother dies from one of these bottles, and a young boy is later killed from gang gunfire. Mantlo serves up darkness aplenty, and though you feel like Cloak and Dagger are intended to be the tidal wave that crests over the shadows, Mantlo makes it clear that, just maybe, they accidentally contribute to it as well. 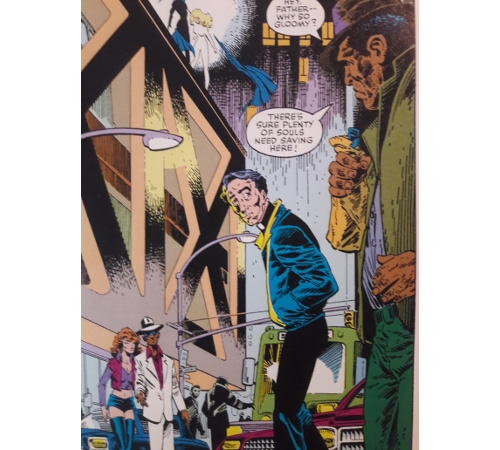 Certain street-level heroes have always managed to run afoul of the police, despite their best intentions. A character like Spider-Man immediately earns your sympathy whenever he’s chased off by the police--he’s rarely rude, he doesn’t kill, and he readily admits his mistakes. Cloak and Dagger, though not as empathetic towards the police, also face the harsh reality that, sometimes, they cause as much danger as they attempt to stop. Maybe they’ve had several appearances in previous issues in the past year or so, but Mantlo makes it clear they continue to carry themselves like rookies. Their conflicting emotions towards incidents they cause--Dagger mourns the loss of a boy caught in the crossfire of bullets meant for them, while Cloak takes on a stricter attitude that, sometimes, events in life just go horribly sideways--injects a clearer sense of morality into their characters than previous appearances. PPSSM issues would tease this moral strain between the characters, that Cloak’s aloofness towards tragedies such as a young boy’s death clashes with Dagger’s greater empathy towards misery of any kind, but Mantlo brings it to the fore here in some of his strongest character work to date.

As of yet, Cloak and Dagger’s disparity over their worldviews doesn’t readily impact their relationship. Mantlo establishes about halfway through the story that Cloak actually needs Dagger’s light to sustain him, a new wrinkle in how their abilities work, but that he equally despises having to rely on her, despite Dagger’s assurance she has “light to spare” to offer him. This twist arrives out of nowhere, and if it weren’t for the fact that Cloak’s reliance on Dagger becomes so essential to stories moving forward, it’d feel somewhat out of place for this new point to be suddenly plopped into the middle of the story with little explanation. Nevertheless, it adds a new layer to the relationship between the two. Previous issues hadn't fully clarified whether Cloak and Dagger saw each other platonically or romantically, and though Mantlo may play with this notion in further adventures, he seems okay right now establishing that the relationship is platonic--they may need each other, but you feel the friendship and care they possess towards one another. 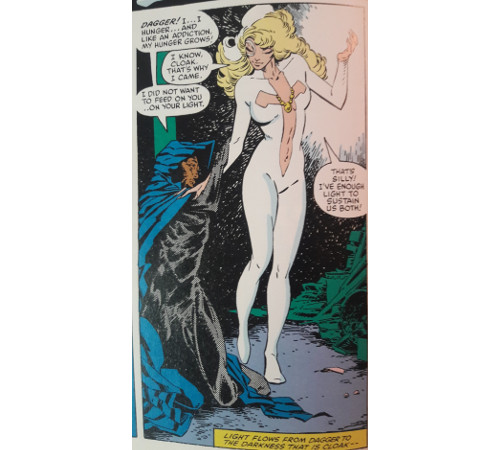 This is, also sadly, the only example of “characterization” we receive for Cloak. Similar to past appearances, he’s still guided by a one-track mindset to eliminate crime that sweeps Dagger along. As I mentioned previously, we’re supposed to believe these characters are teenagers, and though I have no problem associating “teenager” with Dagger by the way she talks and acts, I’m having a difficult time applying that same definition to Cloak. He doesn’t talk like a teenager or act like one. The extra shots of melodrama that pepper his dialogue serve only to entrench him in a “moody guy mad at the world” pit that Mantlo fails to pull him out of during any part of the story. I believe his plight, his “hunger” for light as Mantlo represents it, is intended to make me empathize with the character, but since I’ve had no relatable tether to him before this series, I’m unable to form any sort of attachment to him during these four issues.

Mantlo’s very interested in “world building” in this series, meaning we’re introduced to several new pieces of information, such as Cloak’s reliance on Dagger’s light. That little twist may feel random, but other elements slide in gracefully. The supporting characters of Father Francis Delgado and Police Detective Brigid O’Reilly, who will play instrumental roles throughout Cloak and Dagger’s various series, enter our story seamlessly, without much fanfare. Father Delgado’s Holy Ghost Church will become a sanctuary for Cloak and Dagger, a nice twist on the “superhero secret base” trope which will provide the characters a much needed environmental foundation to remain on. Much like a Bat Cave or Avengers Mansion, the church becomes a central point for Cloak and Dagger’s adventures to spill out of and a familiar environment for readers to latch on to. Likewise, Detective O’Reilly becomes like a Commissioner Gordon or Jean DeWolff to the pair, a confidant not fully confident in the vigilantes but willing to extend a necessary amount of trust.

Unfortunately, Mantlo’s focus on worldbuilding, though essential to establishing the world Cloak and Dagger will continue to operate in, means his central narrative dances all over the place. Cloak and Dagger must find refuge, but we also need examples of how their abilities work against criminals, either successfully or not; characters need to be introduced and utilized, their opinions of our characters formed and their intentions and occupations defined. As many entertaining pieces as Mantlo fits into his world, they do come at the cost of interrupting the flow of his story at moments. Reaching the end the final issue, I sat back momentarily, trying to think through if various narrative strands-- such as Cloak’s need for Dagger’s light, the murderous ex-employee's scheme, the plight of a few runaways that the vigilantes assist, and Cloak and Dagger's shaky alliance with O’Reilly--were sufficiently plotted out and concluded as needed. “Yes?” was my tentative answer. 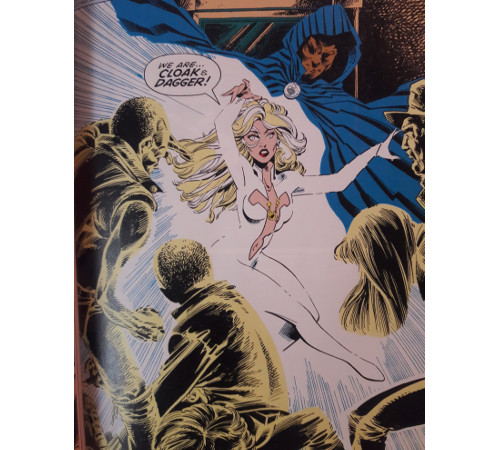 But where Mantlo doesn’t fully succeed at bringing these multiple subplots to satisfying conclusions, his final issue wonderfully scopes out necessary backgrounds for both vigilantes. This backstory does come at the cost at wrapping up the previously mentioned plots, but it’s still presented in an entertaining way. Cloak and Dagger--whose real names, we learn, are Tyrone Johnson and Tandy Bowen--explain their past lives, the years before they had powers, to both Detective O’Reilly and Father Delgado. Typically, I might scoff that Mantlo spends so much time detailing their origins, peppering his pages with potentially unnecessary exposition when only minor explanations could be due. But Mantlo tells their origins well, bringing to light (no pun intended) new details or fleshing out several aspects of the characters he’s introduced already. We learn that Tandy’s nimble litheness, which Spidey commented on a few times in the pages of PPSSM, comes from her background in ballet; we are also told her reason for abandoning her family--feeling shunned by her busy, wealthy mother and misunderstood by her (genuinely caring) stepfather. We are shown that Cloak’s dedication to fighting crime and saving the lives of others (and perhaps his general wordiness) has its roots in an incident where a powerless Tyrone, cursed with a stutter before he was granted his abilities, was unable to say the words necessary to save a friend before he was killed.

Interestingly enough, Tyrone is presented better as a teenager before he possessed his shadowy skills than after. He’s a basketball star in high school (unfortunately, he doesn’t use his natural athleticism as Cloak the way Tandy utilizes hers as Dagger) with friends, loving parents, and the previously explained physical disability. His origin story alone churns out more empathy for the character than anything else Mantlo has written about him so far. You feel for his current condition, you better understand his pain and what he's lost, and you start to realize why he looks upon people the way he does. His general mission of keeping other runaways out of physical danger becomes clearer; instead of simply being some innate principle for the character to follow, it’s a purpose deeply rooted in his past. Maybe he failed to rescue his friend as Tyrone, but under the guise and dark cape of Cloak, he can rescue those who are less fortunate. 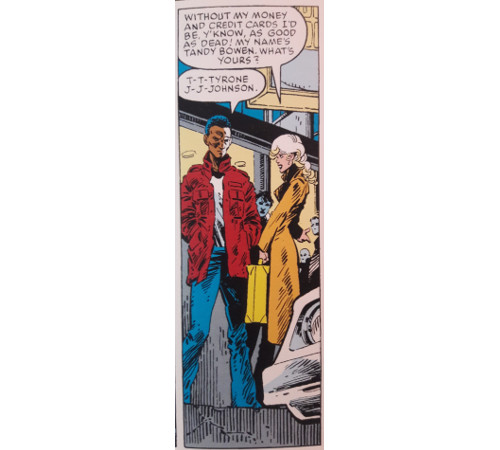 Jumbled as the rest of the story sometimes is, wonderful worldbuilding and character introductions aside, this final issue adds a heap of personality and purpose to both characters. We finally know Cloak and Dagger’s real names, their personalities, how exactly they received their powers, and the deeper notions of why they endure against crime. We see how circumstances have cursed their bodies and warped their innocent minds, aging these two children and placing them in a world of darkness no teenager should have to confront at such an age. The origin doesn’t fully remove my criticisms of the characters, but it provides a better understanding of who they are and why they act the way they do, allowing me to see Cloak and Dagger more deeply than I did during previous readings.