Spider-view: “Stalkers in the Shadows” (Cloak and Dagger, Part 3)

In a story that nicely develops Cloak and Dagger, the regression of Frank Castle is an unfortunate downside 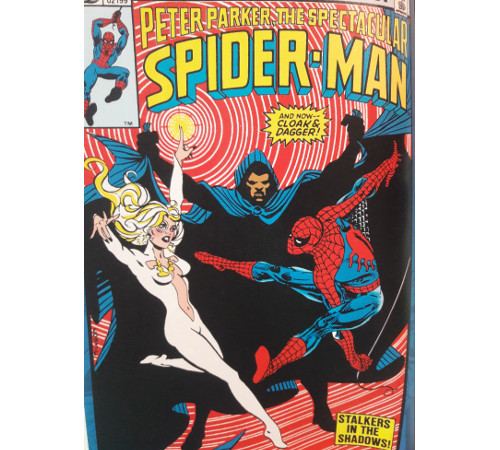 Since our last look at the Peter Parker, The Spectacular Spider-Man series and the first few appearances of vigilante duo Cloak and Dagger, Spider-Man has just gotten through a harrowing gang war that pitted the Owl against Doctor Octopus in a storyline that also sees his girlfriend, Black Cat, almost murdered by the tentacled tyrant. Having never read that story, I cannot give you additional details, but I can tell you that shortly after that multi-part epic ended, Spidey encountered Cloak and Dagger for the third time in less than twenty issues. Mantlo must have been really proud of his original creation to have them reappear so quickly during his run on the title, about a year after their second appearance in PPSSM.

Once again, the pair return for a two-parter tale that sees them go up against another mob lord in their mission to rid the streets of drug-pushing punks. This time, the Punisher gets in on the action, too.

“Stalkers in the Shadows” 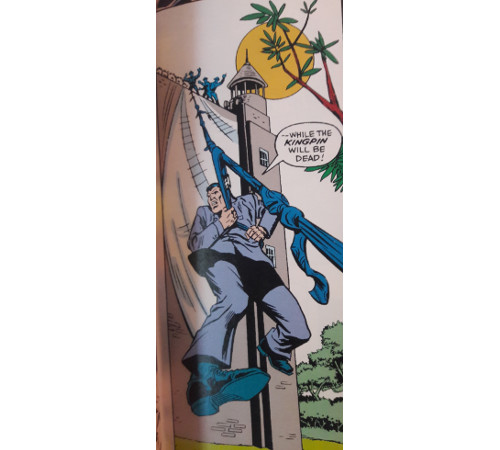 The Punisher begins this arc firmly locked in prison (and don’t even think of asking me how he got there, because I don’t follow the character and am largely ignorant of his history), but soon escapes custody after tricking Boomerang into helping free him. Unsurprisingly, Frank Castle’s brutal alter ego decides early on to go after the Kingpin. I’m unsure if this is Castle’s first attempt at taking Wilson Fisk down, or even if this is their first face-to-face interaction, but a scene near the story’s end where Kingpin remarks that he at least knows WHO the Punisher is makes me believe this is their first physical encounter. The Punisher may not have as storied a history with the Kingpin as Spidey or Daredevil may have, but considering Castle is easily slotted into the same “street level hero” category as both Spidey and DD (alongside other heroes such as Luke Cage, Jessica Jones, and Iron Fist), pitting him against the Kingpin makes absolute sense. The Punisher’s another guy who takes out crime as it runs roughshod over the streets and back alleyways of New York, and who better to exemplify the cream of the crop of the New York underworld than Wilson Fisk himself? Knowing how the two interact in the excellent Daredevil series on Netflix, I was happy to explore an issue that seems to mark their first meeting, planting seeds for future confrontations in and out of the Marvel comic book universe.

Their small conflict near the end of the story alone makes this tale a treat, primarily as it comes during a moment when Fisk believes he’s escaped other foes assailing him. I’m not a huge Punisher fan by any means, but watching what I believe to be the birth of another vigilante/Kingpin conflict is done beautifully by Mantlo, Milgrom, and Moody. After engaging in a short conflict using their respective battle tactics (Punisher’s weaponry vs. Fisk’s muscle, including one entertaining moment where Kingpin literally pulls a rug out from under the vigilante), Castle makes the massive mistake of threatening Fisk’s wife, Vanessa. The scene cuts to our other heroes in the story, Spidey and the duo of Cloak and Dagger, fending off some of Kingpin’s thugs before stumbling upon Castle’s unconscious form. The lack of a continued fight sequence between the skull-emblazoned gun-toter and his much larger opponent is slightly disappointing, but the sight of a beaten and sprawled-out Punisher wordlessly and wonderfully depicts how powerful a foe the Kingpin is, especially when you upset him. You don’t need anyone to say anything to get the point across: you mess with Fisk’s woman, he’ll mess you up. 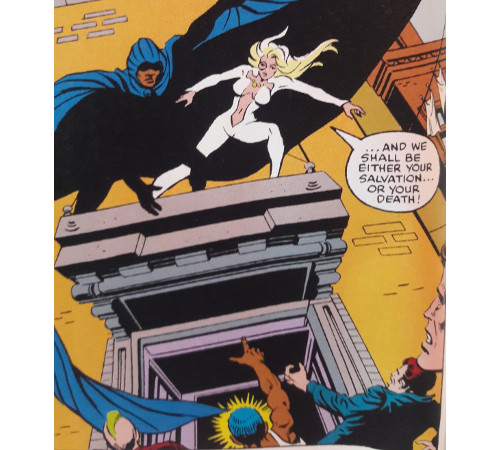 Similar to the previous story starring the hooded Cloak and the balletic Dagger, Spidey’s personal growth takes a bit of a powder in favor of Milgrom fleshing out other characters. Cloak and Dagger’s powers continue to become more defined--instead of causing death or mere pain, as they did previously, Dagger’s light knives now work with Cloak’s cape to expel drugs from the systems of individuals being poisoned by the chemicals. Naturally, Milgrom doesn’t explain how this works or even why their powers adapted to possess this property (and, unless I’m mistaken, which is very possible, he’ll later specify that it’s Dagger’s knives which do the cleansing, not necessarily a combination of their abilities), but he does this to have the duo become further entrenched in their distinct mission: wiping out dope pushers. As I mentioned in a previous post, they have yet to become firmly planted in the “Let’s help runaway kids” side of things, so for now, Milgrom has them only going after criminals on the street.

Oh, and a pretty round guy named Wilson.

No, not the volleyball from Castaway. 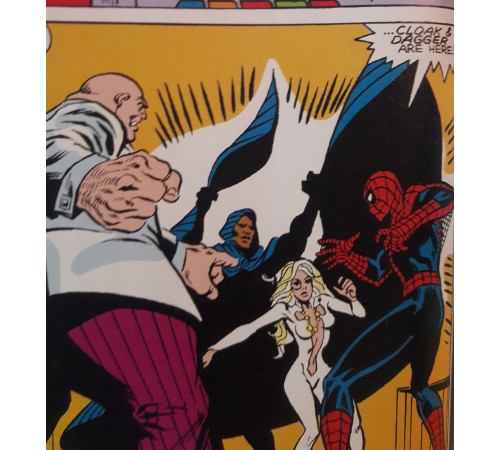 Cloak and Dagger, of course, come into conflict with Spidey over their own hatred and murderous intentions towards the Kingpin, and by this time around, their fights with him begin to become circular. Dagger whips some light knives at our hero, which he dodges; Cloak wraps his cape of darkness around Spidey, which the Web-Head eventually escapes. Their burgeoning abilities may take on new nuances when confronting drug dealers, but they turn to same tried and true tactics against Spidey, making their fight with him nothing special. The three don’t even come into physical conflict with the Punisher, as he’s downed by Fisk by time they find the vigilante.

Castle’s role overall in this story arc is a bizarre one. His hatred for Fisk and desire to kill him are understandable, as far as logic can go when you’re a murderous vigilante. But Mantlo’s handling of the character, particularly in the opening pages of the second issue, is downright confusing at moments. PPSSM #82 opens with a rain-soaked Punisher, his internal monologue raging against the corrupt and sick criminals New York harbors. In his eyes, any crime is detestable and worthy of death. He fires upon a husband and wife engaged in a domestic squabble, shooting the man through the arm. Incensed at another man whose discarded newspaper misses a trash can, Punisher attempts to murder this awful litterer, since we all know such a crime deserves capital punishment. The gunfire freaks out a cabbie, who takes off and screams through a red light. This traffic violation is met with another hail of bullets before Castle is chased off by a police officer.

Upon further research, I’ve discovered that it’s later revealed in the Punisher’s own solo series that he had recently been doused with hallucinogenic gas that made him a little wacko. Unfortunately, the "doused with a hallucinogenic drug" retcon in a Punisher series I don’t own does little to help the current problem in the issue as I see it: bad writing. The sense you get from the scenes where Punisher lights up a quiet New York street is that Castle, perhaps a few bullets shy of a full clip, is still cognizant of his intentions and actions. Since none of the “under the influence of a chemical compound” plot even touches this story, the way Castle’s written here by Mantlo indicates he’s just a violent psychopath and that Mantlo wants us to view him as “tough on crime” by attempting to take out regular people we would never associate as criminals.

But how else are you going to teach those dang litterers?

Jaywalkers, beware. Also, people who count slowing down as a “full stop” at stop signs. The Punisher’ll be gunnin’ for you next. 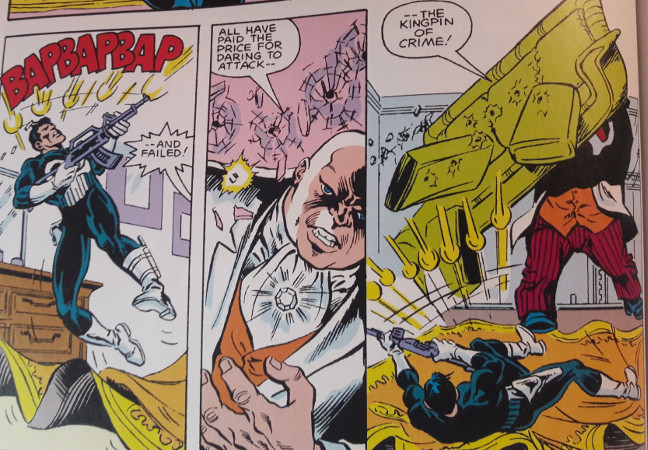 Punisher’s strange behavior also means that I sort of understood why the Kingpin clobbers him when the vigilante threatens the big man’s wife. Fisk’s relationship with Vanessa has always been used to humanize the villain, and even though Punisher and the Kingpin exist on opposite sides of the law, I’m more likely to side with the guy who’s wife has a gun held to her head by a man who just shot at a driver running a red light, an incident said man with a gun caused. Therefore, I felt the tiniest surge of elation with Spidey and the kid vigilante crew come across the Punisher's unconscious (and probably battered) form. As much as I don’t want to see the bad guy get away, I also would rather not have his wife become another victim of Castle’s rampage. Once you consider the Punisher’s origin is founded upon the brutal murder of his wife and children, his treatment of Vanessa reads as even stranger and out-of-character. Is it good tension for the Kingpin? Yes, it certainly ratchets up the stakes. But Mantlo doesn't do Castle any favors in handling him this way.

Mantlo, then, seems far more capable at handling his own creations over those of somebody else. His decision to continually make Cloak and Dagger the heart of these tales means he crafted these new characters the way he wanted to. I don’t know if he had drawn-out plans with either character in mind when he introduced them in these initial issues, but as our upcoming examination of their first solo series should indicate, Mantlo continues to develop them nicely. His interest in these new characters, unique as they are, does sadly come at a price, as neither Spidey nor the Punisher are overly remarkable in these issues. Spidey’s diminished status is forgivable, the Punisher’s less so. Even if Castle's actions were later explained away, Mantlo fails to hint that the Punisher is any less than fully responsible on his assault on innocent civilians and the Kingpin’s wife, dehumanizing him to a point where he comes across as potentially a bigger threat than the towering crime lord he’s trying to topple.