Cloak and Dagger return, their characters given more nuance...but not all the new pieces fit perfectly 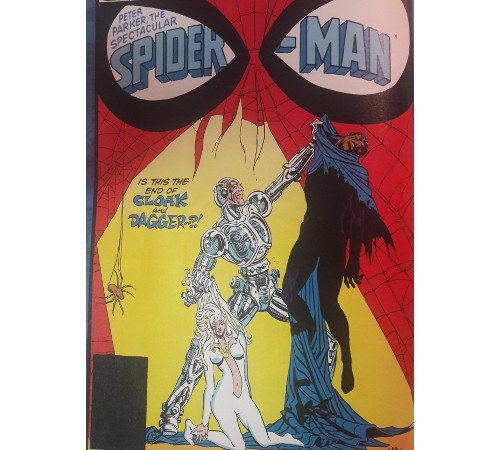 Five issues after introducing the dynamic duo of drug-despising vigilantes called "Cloak and Dagger," Bill Mantlo brings back his latest creations in this two-parter in the pages of Peter Parker, the Spectacular Spider-Man. Still on the warpath against dastardly dope dealers, Cloak and Dagger are presented with slightly more nuance than they were given in their first appearance. Elements in this story shape their characters for several years and tales to come, so analyzing what those specific pieces are is important to understanding them.

While juggling these two enigmatic heroes, Mantlo also takes time to introduce another mainstay in Spidey lore: a certain robotic mobster who nowadays may be fondly remembered for that time his cyborg head was planted on top of an RC car in Nick Spencer’s Superior Foes of Spider-Man.

Oh, how the mighty have fallen. 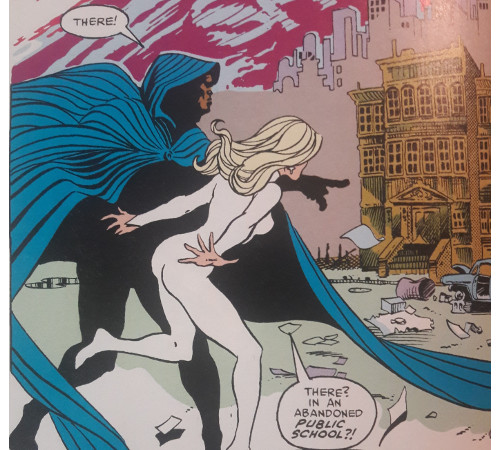 From the get-go, Mantlo already presents Cloak and Dagger as more nuanced this second time around. There are familiar elements, to be sure: the duo’s one-track mindset of taking down mobsters and drug dealers, their associated powers of overwhelming darkness and knives of light, and their bizarre relationship that, at this stage, straddles the line between romantic and familial.

Yet even within these previously established characteristics, we find small alterations that impact the characters in a way that is mostly positive. PPSSM #64 introduced the pair as vigilantes seeking to take down the men whose drugs gave them their respective powers (or, at least, woke some dormant abilities already within the two...this gets complicated later), which they did by that issue’s end. With Cloak remarking to Spidey in those concluding panels that his and Dagger’s work is over for the moment, as the kids who were murdered by the drugs have been avenged, one can surmise that the pair have found a new calling in hunting down drug dealers of all kinds. Later stories will specifically tether Cloak and Dagger to defending helpless kids and runaway adolescents who have either been sucked into a life of drug abuse and crime or are on the cusp of falling headfirst into that sickening swamp. For now, Mantlo still has them on the “punishing” side of vigilantism, hunting criminals who abuse drugs or push them out on the streets. This includes that non-respectable don of the Maggia crime family, Silvio Mandfredi. 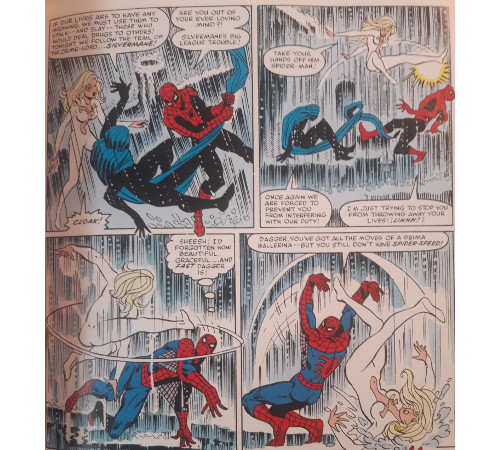 In siccing his creations on these street punks, Mantlo has also adjusted Cloak and Dagger's powers to be less, shall we say, murderous. Shortly after introducing the pair in PPSSM #64, Mantlo quickly established them as a no-nonsense team when Dagger murdered one of the men responsible for their abilities and Cloak led several more men to their deaths. Here, Dagger’s knives are slightly less lethal when used against some pushers early on in the storyline, as is Cloak’s cape. His darkness simply chills, not kills, and her knives simply freeze their foes. No, these two save their lethality for the big fish--Dagger, at Cloak’s command, seems to kill a bedridden Silvermane. But that’s okay, because he’s the Big Kahuna, the guy in charge.

While Mantlo tempers Cloak and Dagger’s abilities, he also adjusts their relationship with one another. He’s already established that Cloak is fiercely protective of Dagger, but here, he engages with the idea that Cloak is almost parental towards her. She seems to follow him wholeheartedly, and when she begins to doubt their mission, Cloak manages to guide her back by reminding her why they exist and what their purpose is. But his guidance is less comforting, almost reprimanding, and Mantlo implies that Dagger is not wholly comfortable with the arrangement. When Spidey asks if the two wouldn’t just want to live life like any normal teenager--establishing that Cloak and Dagger are both young and relatively close in age--Dagger exudes passion for the idea, while Cloak dismisses the notion. This does wonders for Dagger’s character, placing her in a specific light (pun intended) for the reader to see her as just a kid, an adolescent, who yearns for a life of normality. 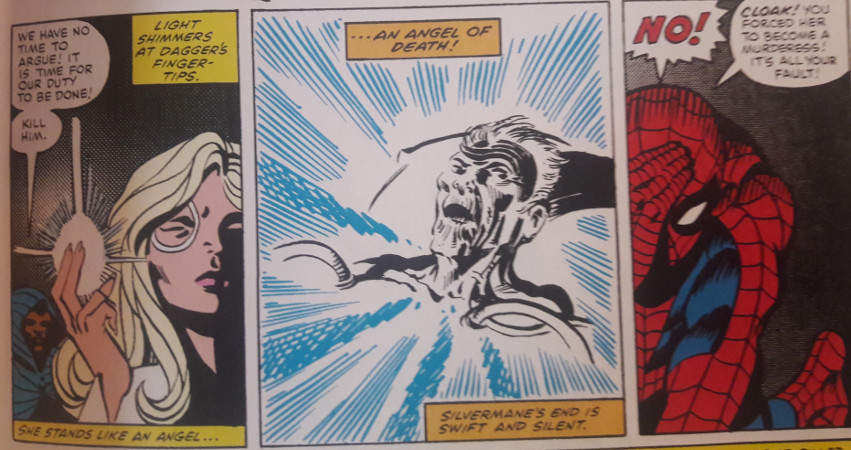 Cloak’s insistence that she follow him and their mission, conversely, hurts his character somewhat. His confidence in targeting Silvermane, despite Spider-Man’s protests, portrays him as cocky, almost arrogant in his belief, but I don’t feel like Mantlo sets him up as a kid who’s just too big for his britches. If I was led to view Cloak as a poor kid whose innocent view on the world was stolen by drug dealers and is now someone who leads a more violent life to better reflect that perspective, I could sympathize with him. Perhaps it’s just the way Mantlo writes him, but Cloak comes across as a zealot, oblivious to the dangers he should be aware of and unnecessarily putting Dagger in a position he should be wise enough to not place her in. Instead of acting like a kid who wants to stick his finger in an electrical socket because, hey, look, a small hole, completely unaware of the danger such an action may pose, Cloak acts like someone who knows sticking his finger in the socket is a potentially bad idea and risks his safety (and Dagger’s) anyway. Childish ignorance may be one thing, but Cloak merely disregards Spidey’s warning.

Naturally, this leads to them almost successfully murdering Silvermane, with the aged gang lord saved only when his brain and major organs are transferred to a cyborg exoskeleton, the form he has remained in through today. I’ve kinda always accepted “robot Silvermane” as a part of Spidey lore, as it’s been over 30 years since this story and because it’s been an aspect of the character that has, surprisingly, lasted that long. Silvermane has never gone back to the old flesh-and-blood body (ooh, now I wonder if someone can retcon the robot as not being the original Silvermane, but a robotic clone after Dagger killed the real Silvio...HEY, SPENCER! I’VE GOT AN IDEA FOR YOU!), and despite several near fatalities in his current form, has remained alive longer than he probably should given his age (ooh, now I wonder if Aunt May is really a cyborg and that explains why she’s been alive this long...HEY, SPENCER!). In recent years, Silvermane has certainly been treated as a shell of his former self, with even his superior robotic form (in physicality, at least) getting a serious downgrade in The Superior Foes of Spider-Man series, wherein the criminal gang lord’s cyborg head was unceremoniously bounced around as a MacGuffin of sorts. 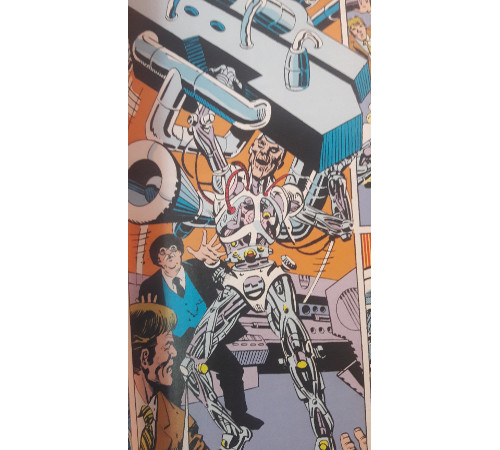 Reading this very first appearance of “robot Silvermane,” I was struck by how much I’ve taken the character’s current form as plain fact, despite how cockamamie it is. Taking an old timey gangster and updating him by turning him into a super-strong cyborg that can go toe-to-toe with Spider-Man? That’s downright ludicrous! I was actually slightly bothered by it this time around, wondering why the heck Silvermane’s backup life-saving scheme was to have his mind transferred to a robot. In one sense, it aligns with the character: in his initial appearance in Amazing Spider-Man, Silvermane forced a non-green-and-scaly Doc Curt Connors to brew the old gangster a youth potion, so self-preservation has always been Silvermane’s aim. That part makes sense. I just find it very peculiar that Save Silvermane’s Life Plan #2 was a cyborg exoskeleton that houses his major organs (an exoskeleton that, if Hannigan and Milgron’s illustrations are anything to go by, actually doesn’t protect them too well).

Odd premise aside, the exoskeleton does enable Silvermane to handle both Spidey and the duo of Cloak and Dagger fairly well in the arc’s finest fight scene. Taking place underground in the subway tunnels, the fight ends up being quite the tussle, as Silvermane engages Spidey mano-a-mano on the platform and aboard a speeding subway car. Cloak, who has largely used his powers against punks and for teleportation purposes, utilizes his cape to transport the subway cars, keeping him and Dagger from being run over. It’s an entertaining display of power by the cape-clad youth and shows that Mantlo could use his characters’ abilities for reasons other than fighting crooks. 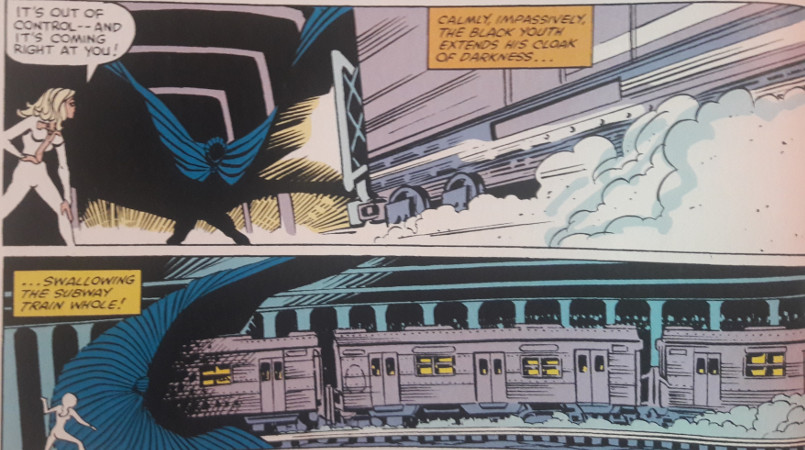 Because so much of the story revolves around Cloak, Dagger, and Silvermane, Spidey gets relegated to the background. Details concerning Peter’s current circumstances are injected here and there--Aunt May’s plan to turn her old home into a boarding house and her current relationship with wheelchair-bound Nathan Lubensky; Peter’s decision to quit his teaching position and his waning interest in his graduate studies; his relationship with Debra Whitman, who seems to believe he’s Spider-Man; and his tempestuous relationship with the Kingpin, whom Spidey seeks out for information but also despises. This is, naturally, a Spider-Man comic, thus the need to represent our hero. But for the moment, his problems and proclivities are shuffled aside. I’m not complaining about it, certainly not, as the characters of Cloak, Dagger, and Silvermane are interesting enough to run the show for a while. If anything, Spidey-related sub-plots are moved by inches here, a few of which (such as Peter’s relationship with Debra Whitman) have no resolution in my collection while others (Peter and his graduate studies) will be fleshed out in later issues I have assembled. Considering how many issues and series Spidey has been a part of over the years, having a two-issue story arc mainly dedicated to characters that don't have spider-powers is a nice change in pace and gives Mantlo, Hannigan, and Milgrom the ability to create rather than reinvent.

Cloak and Dagger are quickly presenting themselves as engaging characters to follow. From what I remember of their solo series, the characters eventually hit a point where they plateau and become static, with several issues of fighting drug dealers, shooting light knives, swallowing crooks in capes of darkness, and having their origins and powers continually revisited retconned becoming the norm. With these first two appearances, however, Mantlo, Hannigan, and Milgrom have introduced a team of unique individuals who, for a while, will be allowed to blossom before growing stale and repetitive.