A frantic team-up tale holds only a small candle to a well-developed, surprisingly relatable backup narrative 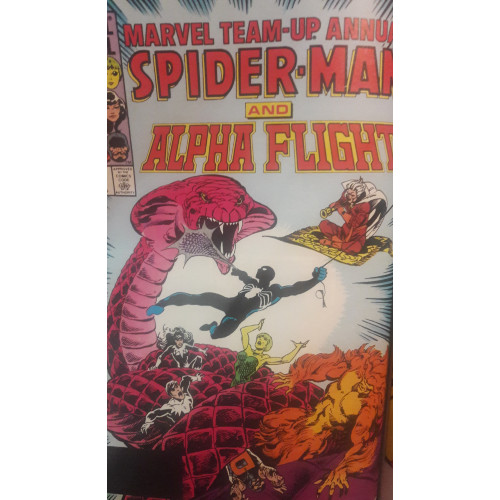 This issue, however, goes a bit more cosmic.

As we all know by now, Spidey is equipped with a brand new costume from an alien world that he knows little about...and a lot of what he doesn’t know may be bad. Tom DeFalco and Al Milgrom may be playing up the mystery of the alien costume over in Amazing Spider-Man and Peter Parker, the Spectacular Spider-Man, respectively, but this MTU annual foregoes that particular subplot in favor of something of more lighthearted and entertaining. And that’s not bad. Alongside the Canadian supergroup Alpha Flight, Spidey battles a guy with the worst case of the “gimmes” you’ve ever encountered.

Honestly, we could all use a little break from alien costumes, couldn’t we? 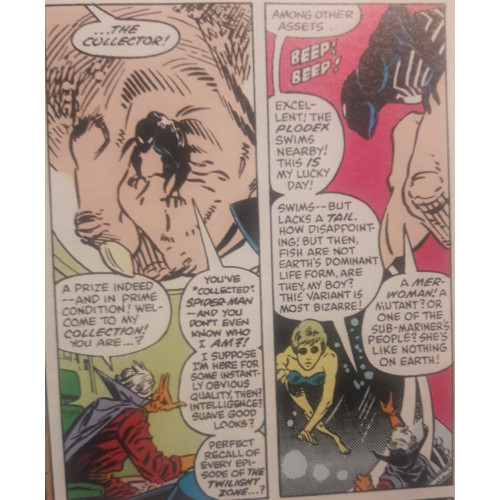 For this issue, we skip lightly back in time to a period occurring shortly after PPSSM #92 but before PPSSM #93. Since PPSSM #93 shows Peter perusing a Daily Bugle newspaper detailing Spidey's first fight with the Answer, including a photo Peter sells to Robbie Robertson at the beginning of this issue, we can assume this takes place between Spidey’s first bout with Kingpin’s henchman and his second confrontation (which saw the villain “kidnap” the Black Cat). The placement of the issue isn’t a huge deal, and Simonson doesn’t confuse the timeline at all by placing her tale where she does, but it’s something I felt was worth pointing out, since I am reading these stories chronologically by publication date. Even though this annual was published two months after PPSSM #93, the events of the story take place before that issue. Just for clarification’s sake.

This may mean that Al Milgrom was unable to reference this annual in PPSSM, but that doesn’t detract from the story Simonson presents here. Readers come face-to-face with the Collector, a member of an ancient and cosmic race known as the Elders of the Universe. Fans of the Marvel Cinematic Universe may recognize the Collector as one of the characters in both the first Guardians of the Galaxy and Avengers: Infinity War, portrayed by Benecio del Toro; more importantly, they may also remember his very large assortment of galaxy-spanning “knick knacks,” running the gamut from aliens to people, weapons, an anthropomorphic duck, and even an Infinity Stone. 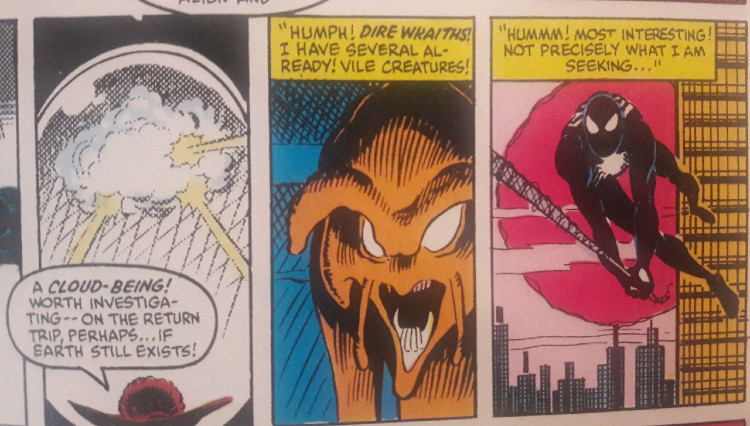 The Collector, as Simonson writes him, is a similar character, the caretaker of a large and always growing assemblage of odds-and-ends. Anyone interested in a magic flute that awakens a hypnotic snake? The Collector’s got one somewhere around here. Looking to get your hands on a Dire Wraith? Heck, it should be easy, as even the Collector himself will have you know that he’s got plenty of them. Simonson makes the Collector a cosmic kleptomaniac, someone who’s always eager to claim yet another treasure, another prize, another person to stow away amongst his various prized possessions.

Thus, the Collector is simultaneously a relatable yet terrifying villain. His shtick is simple: he’s greedy. He wants more and more stuff, and I think for any of us who have made a spur-of-the-moment purchase from Amazon or who have dwelled on items we “needed” (read: “wanted”) and thought of little else until said items were in our grasp, we can most likely relate to the Collector. He’s obsession and desire personified, driven by an insatiable hunger for all things tangible. He wants what he doesn’t have and will do whatever he deems necessary to get it. Case in point, our delightfully friendly Spider-Man, whom the Collector wants not only for his lauded strength but for...well, it’s never really said. The implication, from as much as I can read into Simonson’s dialogue, is that the Collector wants Spidey for the suit he’s wearing. Never stated directly, the purpose is left on the tip of his tongue for readers to surmise, but I expect it’s what Simonson was hinting at. I prefer the hint over something more direct, and I think that if the Collector had commented on Spidey’s suit specifically, I may have just nodded and gone “Oh, of course he wants Spidey for the suit. What else is new?” This way, I was able to play with the possibilities in my head and picture what the Collector wanted instead of knowing it for certain. Simonson's tease is also nice for anyone following the entire "Saga," as it deftly hints at the costume's true nature without revealing too much.

Simonson does quite a bit of this, actually, making passing remarks to stories, events, or objects without delving deep into details. She mentions the Dire Wraiths, as I said before, but also comments on the Secret Wars limited series, makes a passing reference to the Kymellians (an alien race Simonson created for the Power Pack series, which debuted a few months prior), and exposits on recent circumstances in Alpha Flight’s own series. None of this feels over-the-top or distracting from the main narrative, adding more subtle depth to the story and reminding you of the nigh inexhaustible universe our heroes live in. 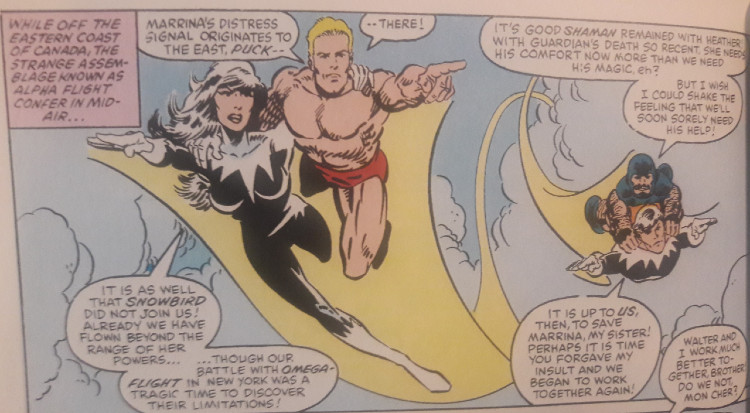 The Alpha Flight comments, in particular, were incredibly helpful while I read. As someone who is highly unfamiliar with the team, I felt like I was able to glean a bit into the characters and conflicts associated with this Canadian supergroup. Aurora and her brother Northstar stand out as fascinatingly complex--Aurora has a split personality disorder, which seems to manifest itself at the worst possible times, while Northstar is insanely protective of his sister in a way that borders on obsession. His jealousy burns towards Sasquatch, a huge, furry, orange, ape-like creature whose human form seems to love Aurora. Simonson puts these three in a bizarre triangle of love and hate, and though I don’t know if the three had such heated conflicts in their regular series, I applaud Simonson’s ability to bring their complexities to the page.

What drove me a tad crazy while reading, sadly, was Spidey’s attitude towards the team. Normally, he’s been fairly cordial when dealing with other heroes, and even when he has gotten into a dust-up or philosophical argument with anyone, he’s at least understood their point of view or reached the point where they understood his. But with Alpha Flight, Spidey leaves the adventure visibly frustrated with the group, but if I may say so, his anger feels directed at the wrong people. I would wager that this is intentional on Simonson’s part, that because Spidey doesn’t understand the core dynamics of the group, he’s unwilling or incapable of understanding them better. Simonson does, after all, show several scenes where we’re privy to Alpha Flight’s conversations and thoughts while Spidey is not present. This does make for a nice philosophical moment near the story's end where Spidey compares Alpha Flight’s issues to his and realizes that, even if things momentarily suck for him, several of his problems aren’t nearly as bad as the conflicts others are dealing with. A nice sentiment, to be sure, and one that lends a bit of inward reflection and growth for Peter; but to have it come at the price of calling Alpha Flight “a bunch of lunatics” seems somewhat of a harsh price for internal insight. It’s too callous for Spidey to say. 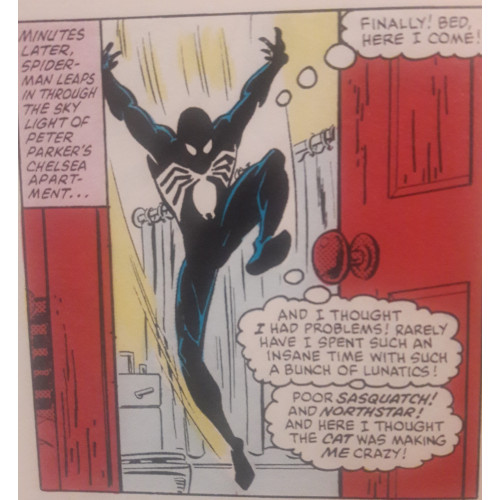 Included in this annual is a backup strip, courtesy of writer/editor Bob DeNatale and penciler David Mazzuchelli, who fans might know as the guy who worked on Batman: Year One and Daredevil: Born Again with Frank Miller. A short, five page story titled “No Place to Run,” the backup narrative is one I glossed over quickly the first time I read it, coming away with little to reflect on. This second time around, I saw the story with fresh eyes. Focused on a couple living in Albany, the story follows the husband and wife as they watch a news story about a nearby incident involving the Fantastic Four, Black Panther, and Crimson Dynamo. Aside from the Cold War-esque threat of potential nuclear disaster and the Dynamo’s affiliation with the Soviet Union, the story feels free from its historical constraints. DeNatale showcases the couple’s worry splendidly as they sit, transfixed by the news, clearly upset over the idea that all the superhuman violence that’s been seemingly kept to New York City is finally making its way to their neck of the woods.

Superhumans are never going to make their way to my home town (or anywhere else, probably), but even I understand this couple's worry. "Sitting at home watching the news while being unable to do anything about it" feels like a very 2020 concept. I don't discuss current events much on this site, as I view my blogging as a way to temporarily remove myself from the world's craziness and would rather my posts have a "timeless" quality to them, unfettered to "today" or "now." Still, it seems difficult not to at least mention that part of my interest in the story came from this surprising connection. Fear of the unknown, fear of cultural shifts, fear of powerful people impacting the lives of those who just want things to stay normal...it’s a very relatable five pages. 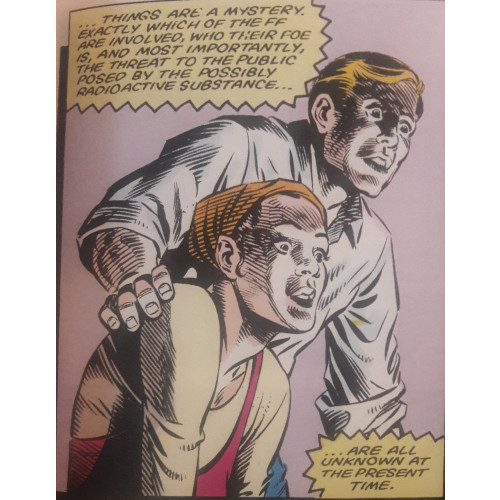 Both Simonson and DeNatale create entertaining stories that reflect well upon the world they take place in--both the wonders and terrors of the Marvel Universe are represented here. Even if the backup story doesn’t include Spidey, it remains a well-developed tale for the space it’s given, which isn’t something that can always be said about shorter stories. As well-written as Simonson’s main narrative is, what with its depth of detail and decent character moments, the smaller narrative remains a powerful dose of realism and emotion--a story you can read in just a minute or two but somehow relate to as soon as you turn the first page.