Spider-view: “And the Answer Is…” (Alien Costume Saga, Part 8)

Al Milgrom's chronology might still be broken, but he works to make up for it with the addition of a great new villain 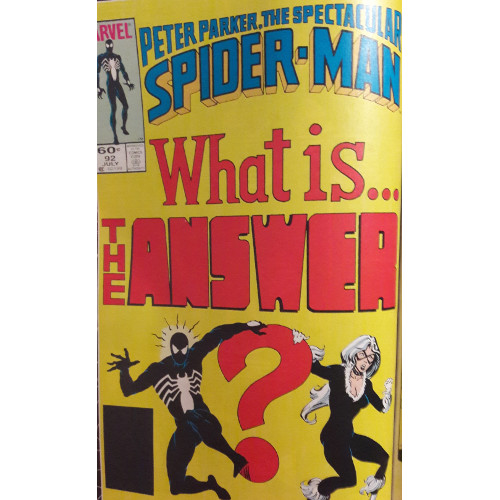 Our last seven posts have brought us through the introductory phase of the era in Spider-Man comics known as the “Alien Costume Saga.” Spidey has thwip’d his way through a handful of issues wearing a striking new outfit and getting into the kinds of zany shenanigans--Spidey’s relationship with Felicia Hardy, the Black Cat, doesn’t have the most stable foundations, and Peter Parker’s relationship with Aunt May has been in shambles ever since he told her his decision to leave graduate school. Last time, we witnessed Peter screw up an opportunity to make amends with May.

So what’s in store for Spidey and the Cat this time around?

“And the Answer Is…” 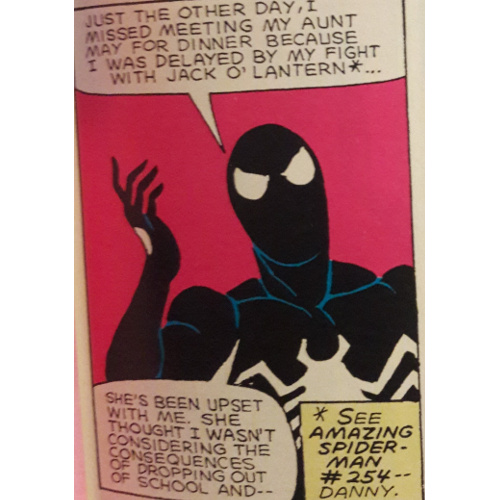 The meandering terror known as “Al Milgrom’s wonky timeline” rears its ugly head again in this issue. Just when you thought Tom DeFalco had cleared up that problem in ASM #254 by placing Spidey and Black Cat’s fight with the Blob in PPSSM #91 a week prior to the events of his own issue, Milgrom steps in with a baseball bat and smashes DeFalco’s carefully constructed linear sequence. By referencing ASM #254 (“Just the other day, I missed meeting my Aunt May for dinner because I was delayed by my fight with Jack O’Lantern,” Spidey tells Cat early on), Milgrom establishes that this issue has to come after DeFalco’s narrative (the issue where Spidey fights Jack O’Lantern), meaning PPSSM #92 should be happening about a week after Spidey and Cat’s fight with the Blob. However, shortly after that pronouncement, Black Cat remembers to give Peter his camera, which she says she’s been holding onto since the Blob fight. Ergo, she’s had the camera in her possession for at least a week.

Problematically, while Milgrom references ASM 254, he also contradicts that same issue. I didn't mention it in my last post, but Peter is shown to be taking photos in ASM #254’s very first page. DeFalco’s only reference to the Blob fight is having Peter mention it happening the previous week (though Peter also takes a moment to reflect on his belief that Felicia is “keeping something from me,” which is hilarious in retrospect considering she actually was keeping his camera from him, even if that isn’t what Spidey means). Nowhere does Peter mention he’s using a spare camera or that he still needs to get his camera from Felicia. I’d assume most readers transitioning from PPSSM #91 to ASM #254 just assume Peter received his camera from Felicia off-panel, making the physical handover of the device in PPSSM #92 a very clear error. 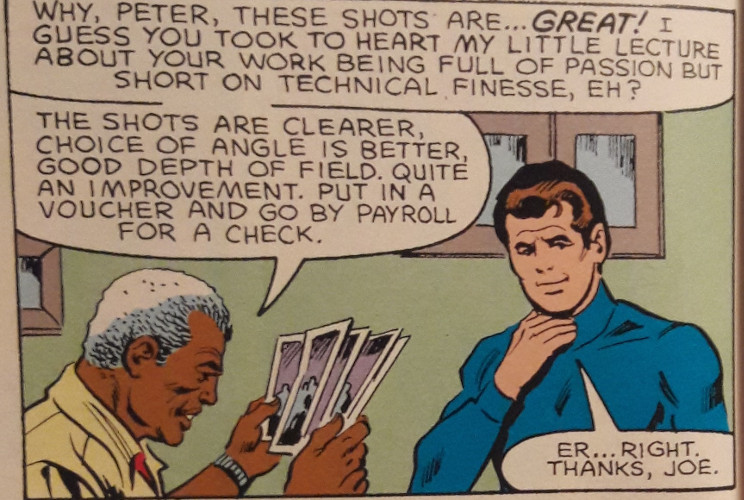 Also odd is a scene where Peter visits the Daily Bugle and sells photographs of his and the Cat’s fight with the Blob to Robbie Robertson. At this point, if we take ASM #254 into account, that fight was a week ago at least and probably not front page-worthy material anymore. The scene does allow Milgrom to make a joke about how Robbie, who’s been hard on Peter’s photographic abilities the last few issues, is pleased with the pictures presented of the fight and Peter’s apparent improved technique, the irony being that it was Felicia who took the photos, not Peter. A very passable joke from Milgrom, but slightly dampened by the oddity of the timeline.

But enough poking. To his credit, Milgrom takes the time to introduce a new player to the scene, a costumed criminal working for the Kingpin who goes by the moniker “the Answer.” Fans will learn much, much later on that the Answer received his abilities from the Kingpin, similar to how Fisk granted Felicia her own powers, but for now, all we know is the Answer is a very incomprehensible yet powerful man. So far, the Answer is perhaps the best new addition to Spider-Man’s world during the “Alien Costume Saga” in terms of characters. Cleverly crafted, the Answer’s powers allow him to adapt to any opponent--when presented with Spidey’s agility, he develops superior speed; when faced with Black Cat’s fighting prowess, the Answer gains an almost balletic grace that enables him to dodge her attacks without responding violently (knowing full-well that attacking her will result in his own harm). In this first appearance, the Answer is presented as a seriously viable threat to the duo, dealing with them in an almost balletic fashion that the light-wielding vigilante Dagger may envy. Their battle is more of a dance, with the Answer responding quickly and adapting effectively to counter Spidey and the Cat’s strikes. 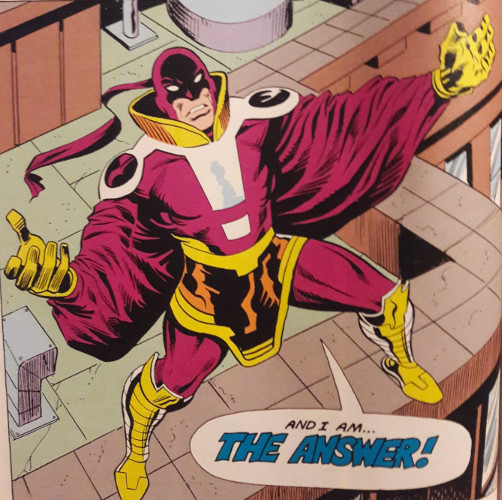 Answer’s lack of background makes him equally enigmatic and frustrating; part of this comes from knowing that Milgrom will do nothing to flesh out the character’s previous life in his next handful of appearances. He’s just there--no real name, no origin, no real wants or desires other than to dutifully serve the Kingpin--and for all his grandiose power, he lacks dynamic characterization. But in terms of power, he’s an incredibly entertaining opponent and comes packed with raw potential. I was immediately hooked by the character’s premise, someone who can adapt at will to whatever is thrown his way. Some may view this as almost too powerful, and I might agree, were it not for the capable and entertaining way that Milgrom writes the Answer. I never felt frustrated during the Answer’s fight with Black Cat and Spidey, I never rolled my eyes and blamed the writer for thinking up some ham-fisted solution for the Answer to evade capture.

Much of my reaction stems from one simple fact: the Answer, for all his capability and contingencies, is not perfect. Milgrom writes him as flawed and not always accurate, evidenced by a series of panels where Spidey gets the drop on the villain and delivers a decent beatdown. Were the Answer always capable of evading our heroes, he’d be a lot less interesting to me as an enemy. But because even a guy called the Answer doesn’t always have the right one, he becomes entertaining and amusing to read about for the section of the story arc he appears in.

Elsewhere, Milgrom uses a scene to introduce some Flash Thompson-centric subplotting. In the previous issue, Flash had visited Peter looking for some advice, but before Peter could offer anything of substance, he had spotted Felicia prowling outside his window and booted Flash out. Flash now interacts with his girlfriend, Sha Shan, who he had actually wanted to talk to Peter about in PPSSM #91. Milgrom is trying to play up a sort of mystery surrounding Flash--he comes in with a black eye and bloody nose and gives Sha Shan the cold shoulder. Later issues will play up this little mystery, and as unsatisfying as it will end up being (at least in the issues I own) if my memory serves, Milgrom should receive some praise for interacting with Peter’s secondary cast.

Other members of the cast don’t have as much time on the page--notably Robbie Robertson and Peter’s landlord Mrs. Muggins--not receiving any real characterization outside of Robbie’s seeming transformation into J. Jonah Jameson in his current position as the Daily Bugle’s Editor-in-Chief and Mrs. Muggins’ insistence on Peter paying her rent (which makes me wonder if she’s the inspiration for the Russian landlord character in Sam Raimi’s Spider-Man trilogy of films). Though neither character is huge for the overarching plot of the “Alien Costume Saga,” Robbie’s very brief scene, though made complicated by the bizarre timeline issues, is a somewhat interesting take on the character, providing some small insight into his changing character as he tackles the pressures of his current position. Again, I don’t think this is something that is resolved in the issues I own, but Milgrom nicely adds this dimension to Robbie without having to spell it out for readers. 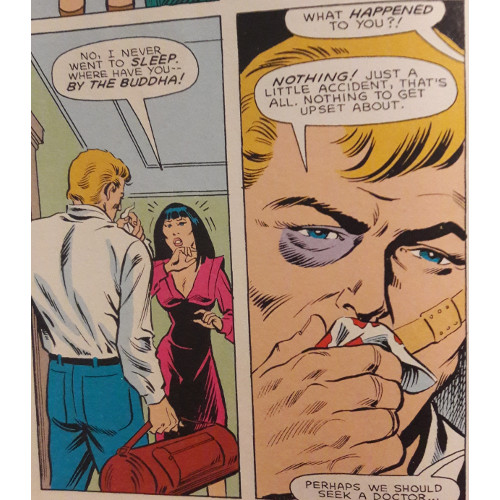 The timeline may be a jumbled, broken mess at this point, but Milgrom still plays well with the story even if the backdrop it’s set against is wacky. The Answer is a fantastic new addition to Spidey’s rogues gallery, a villain who will be woefully underused even before the “Alien Costume Saga” draws to a close. An inventive foe, the Answer adds a jolt of suspense and menace to the title that I highly appreciate, and I’m more than glad that, even with all the other plot points dealing with the Black Cat and Spidey’s new costume, Al Milgrom took the time to create and introduce a brand new character to the vast world of Spider-Man.