Tension flits through this issue, some of it decently inserted, some of it misplaced, as Milgrom wrestles with the Spidey/Cat dyanmic of the series 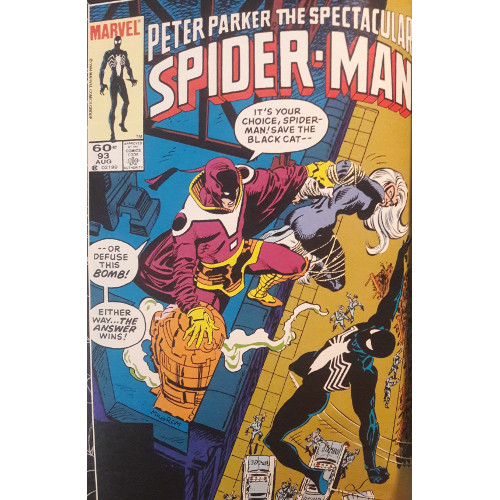 This issue marks the beginning of the end.

For the last handful of Peter Parker, the Spectacular Spider-Man issues, writer/artist Al Milgrom has teased a growing disconnect between Spidey and his lady love, the Black Cat. This superhero/former thief relationship has faced its share of challenges, most recently Peter’s discontent with Felicia’s somewhat misguided actions, such as when she looked for Peter at the Daily Bugle and his Aunt May’s home while in her Black Cat guise. Combine this with Felicia’s inward guilt toward the origin of her powers--which she received from Spidey’s enemy the Kingpin--and her unwillingness to tell Spidey the truth, and you’ve got an entire casserole of conundrums. Victorious moments have helped support the relationship temporarily, such as their win against the Blob and a battle against new foe the Answer that may have been a loss but at least proved their fluidity as a superhero couple. Still, Milgrom is laser focused on the negatives and how those continue to encumber an already complicated pairing.

This rift took a backseat in the last issue, with Milgrom’s focus leaning more towards introducing the Answer, but it’ll spring back to life in a powerful way here. We’ve got about eight issues to go before PPSSM’s climatic 100th issue, and I feel it necessary to tease that that issue will come with a massive change for both our heroes. The seeds to that change are sewn here, so let’s watch as Milgrom’s plan unfolds.

“A Hot Time in the Old Morgue Tonight” 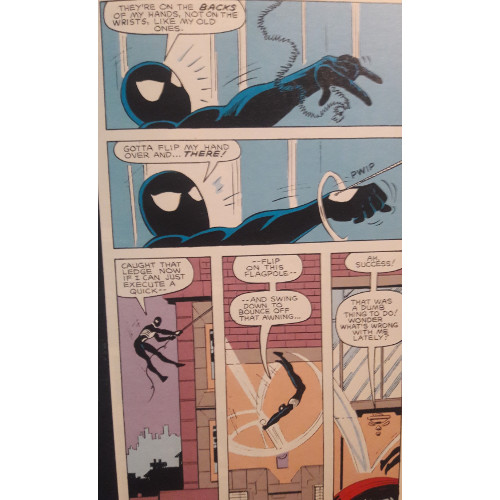 First off, I should take a moment to discuss that Milgrom really does nothing to cement the “when” of this issue. No editorial notes or references specify the in-universe date this occurs on, only that it comes after the previous issue, PPSSM #92. Milgrom doesn’t mention the events of ASM #255 (where Spidey tangled with the Red Ghost and his Super Apes), which I’ll take as a small blessing. It’s nice and easy for me to mentally place this issue after both PPSSM #92 and ASM #255 without any contradictory comments from Milgrom. Thumbs up, Al.

As we enter the story, we see deeper fragments are beginning to form in Peter and Felicia’s relationship. Peter’s pent-up frustrations with the Black Cat invading his personal life--which isn’t just limited to popping up at the Daily Bugle and May’s Forest Hills abode, but includes moments where the Cat periodically shows up at Peter’s apartment unannounced and in costume--collides with Felicia’s long-standing enmity of Spidey’s Peter Parker persona. Back when Peter first revealed his identity to her (in PPSSM #87), the Cat recoiled in horror. In her mind, Spidey couldn’t be this random guy, this faceless nobody you’d easily pass on the street without noticing. Sans mask, nothing about “Peter Parker” was special to Felicia; to her, it was all Spidey all the time...or nothing.

Milgrom doesn’t say so explicitly, but the implication is Felicia’s complete apathy towards Peter Parker explains why she callously disregarded Peter’s privacy in showing up at places he frequents in one of our previous issues. To anyone else, her actions appear misguided or foolish at best, downright idiotic at worst, and you might wonder why Milgrom would write her in such an undignified manner. The answer becomes clearer here, as Cat digs in her heels and reasserts her position that she only cares for Spidey with the mask on; Milgrom hasn’t touched on this point in a few issues, so I’m glad he brought it back up as the focal point of Cat’s attitude towards Spidey. Admittedly, Cat’s assertion doesn’t lend her actions in PPSSM #90 any additional credibility (for the reader or for Spidey, actually, as he calls her “nutsier than I thought” at one point), but it at least explains why she acted the way she did, even if she pitched logic and reason out the window. 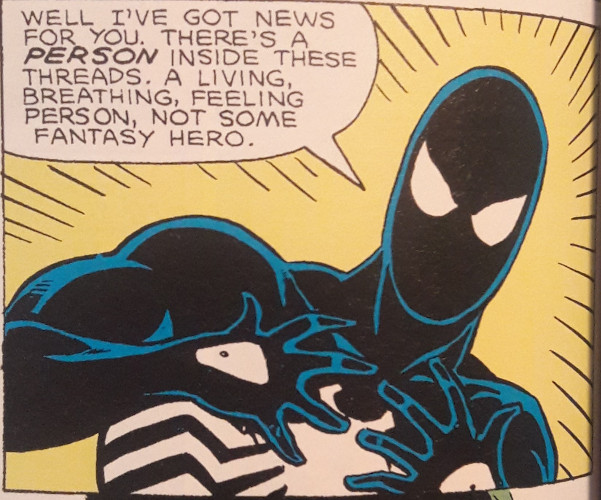 Spidey, for his part, basically clenches his fist and retorts that if Felicia is going to love him, she needs to love every aspect of Spidey. “You don’t care about me, only this stupid costume!” he shouts back. It’s a passionate plea, and one I can get behind decently enough. Over the past several issues, Peter has tried on multiple occasions to break through to Felicia, to get her to listen and understand his position. Stonewalled at every turn, Spidey’s pivot towards the dramatic make sense. If this was Peter’s first attempt to discuss the situation with Felicia and he exploded from rage after being stymied, I wouldn’t defend him. But I understand his position, losing his cool with someone after repeated and failed attempts at trying to work through a problem with them.

From what I’ve read, some fans believe Felicia’s portrayal after Peter revealed his identity to her went downhill. I, for one, see where PPSSM readers may think her character was tainted. Tension between the couple was created when Peter removed his mask in front of her, as his attempt at letting Felicia into the very human and non-superhero side of his life was automatically rejected by a woman who immediately decided she wanted nothing to do with that side of him. This isn’t to say I think adding that tension was necessarily a bad idea, as it did introduce an entertaining layer of conflict to the relationship that I think makes sense--Peter has worked so hard over the years to keep his identity a secret, so when he chooses to voluntarily open himself to someone like that, it’s because he’s chosen to trust them with his most important secret. Rejection from Felicia hurts him, because he feels she’s denying him the ability to be a whole person around her.

I think at this point, however, Felicia’s continued insistence on Spidey remaining only Spidey around her has reached a level of silliness, hurting a character who should come across as intelligent and capable of seeing past a mere mask to the true person of the man she claims to love. Undoubtedly, this is one of Milgrom’s methods of pulling the two apart, but it makes for clunky reading at moments. 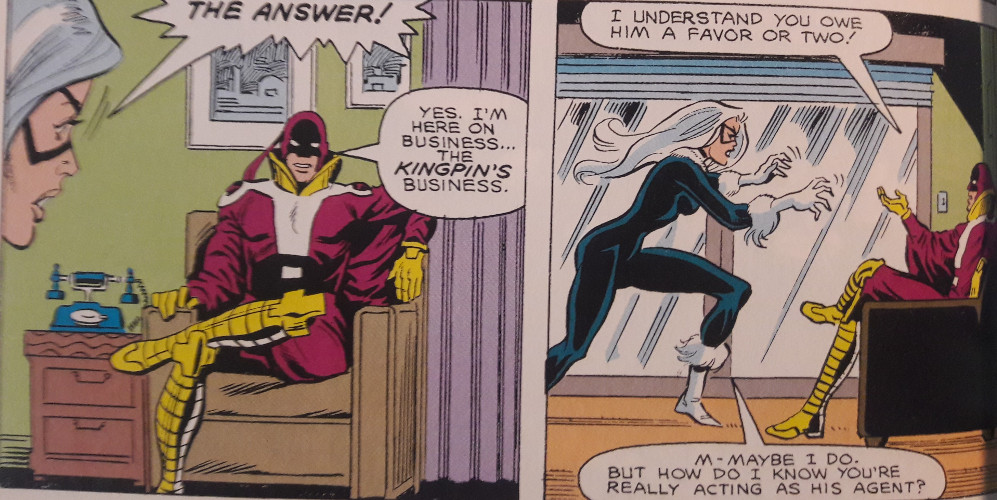 Shortly after this, Felicia is approached by the Answer. The Kingpin is, finally, calling in his favor from Felicia in exchange for the powers he gave her. This plot development, I believe, is a much more satisfying cause of tension between the two than Felicia’s unwillingness to acknowledge Peter as a complete human. Milgrom nicely plays off the situational irony embedded in the circumstances, creating a scenario where Felicia is keeping secrets from Peter and essentially tricks him by pretending to be the Answer’s hostage. You wince and groan inwardly, maybe offering up a quiet “Felicia, what do you think you’re doing?” as she continues to string Peter along. Caught between a rock and a hard place--paying back her favor from the Kingpin and not telling Peter vs. spilling her guts to Peter and inciting both his anger and the rage of Wilson Fisk--Cat goes with what she considers a necessary evil.

Fortunately for Felicia, the entire situation seems resolved without her secrets coming to light; the Answer gets what he wants, a mysterious body wrapped in a shroud (which we will explore in later issues), while Spidey rescues his feline friend. She breathes a sigh of relief, knowing her debt has been paid and that Spidey saved her without injury. I suppose, though, this is where the additional tension from Felicia disliking Peter is a nice addition. I’m not saying the Kingpin connection won’t come back to haunt them both (maybe it will, maybe it won’t), but with that plot wrapped up as nicely as he can do so for the moment, Milgrom can turn his attention to other areas of turmoil for our two. 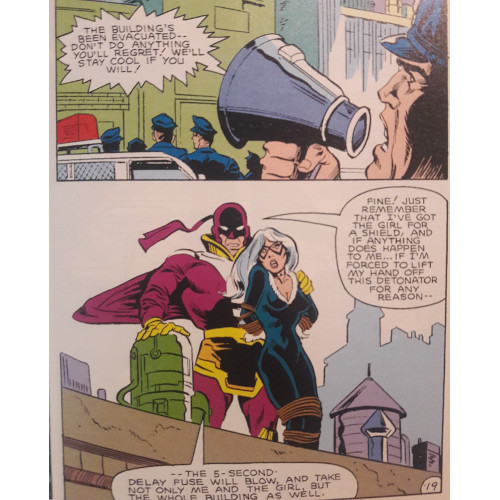 I’m not sure how Milgrom viewed their pairing, whether he was a fan of it or not, but the direction he’s taking them is paved with trouble. Uneven ground and potholes appear throughout the road, and though the two may bump and bumble their way over or around some difficulties with a varying degree of success, the road ahead doesn’t look any better. Like with a few previous issues, Milgrom seems to be holding on to a thin strand of hope, that these quarrels can be resolved and the Spidey/Cat relationship can be restored to previous levels of bliss. I won’t say whether or not he does so, but this issue shows that Milgrom can create some entertaining conflict between the Spider and the Cat. In one instance (Peter’s unmasking), the conflict comes across as a little hokey and hurts Cat’s character more than helps it. But the conflict surrounding Black Cat’s indebtedness to Wilson Fisk is certainly entertaining; you feel empathy towards her situation, even if she unwittingly got herself into trouble to begin with. Cat’s continued and blatant rejection of Peter Parker stirs little inside me, perhaps nothing more than anger towards her selfishness. But as foolish as it may be for her to continue operating with Fisk, that decision is a bit more understandable, and in this way, Milgrom at least makes Felicia a character you can relate to in part. I don’t know if anyone here will raise their hand if I ask if they’ve ever repaid a favor for a mob lord, but I think most of us can understand how poor decision making can get us into holes we’d very much like to get out of as we struggle to find freedom.