Spider-view: “Even a Ghost Can Fear the Night” (Alien Costume Saga, Part 9) 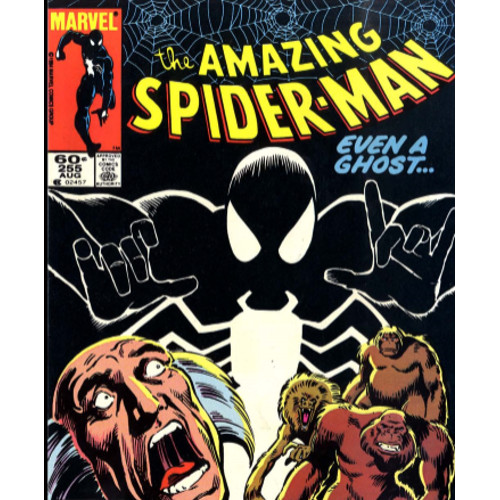 With Rick Leonardi leaving Amazing Spider-Man after issue #254, he is replaced by Ron Frenz, whose work we examined in the first installment of the “Alien Costume Saga,” ASM #252. In the two issues Leonardi penciled, Peter has seriously hindered his relationship with Aunt May by telling her he dropped out of graduate school and then failing to show up at a meeting intended to help them reconcile their differences.

The last few ASM issues have had a “one-off” feel to them, single issue stories that may have contributed to overarching plots or subplots but told their central narratives in one issue. No cliffhangers, no dangling plot threads to be wrapped up in the next chapter. DeFalco and Frenz continue that trend here, crafting a single issue story that sees Spidey take on a foe he normally doesn’t tangle with.

“Even a Ghost Can Fear the Night” 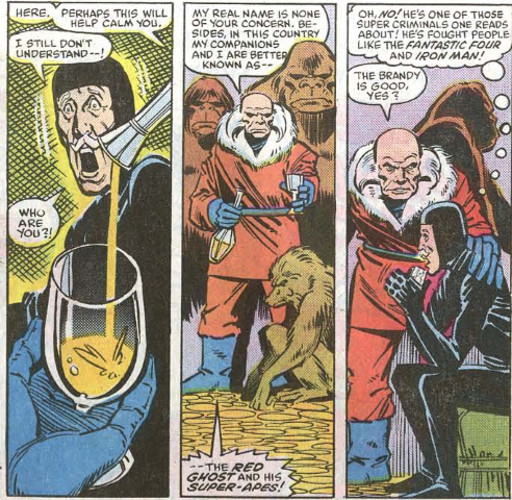 Some history: a few years earlier, in a story written by J.M. DeMatteis and penciled by John Romita Jr. (from a plot by Denny O’Neil), Spidey faced a super-criminal known as the Red Ghost. Oh, and his Super Apes. You can’t forget the Super Apes. Because not only do these cosmically-altered mammals follow the Ghost everywhere, they’re integral to the villain introducing himself to unsuspecting victims or heroes. “The Red Ghost and his Super Apes!” he boldly proclaims. You really shouldn’t forget the Super Apes. Spidey sure didn’t after the events of 1982’s ASM #223, where he battled the Soviet supervillain and his apes on Empire State University’s campus, where Peter Parker was, at the time, undertaking his graduate studies.

That detail isn’t hugely important here, but it was satisfying to me. As I opened ASM #255, I started thinking, “Wait. Hasn’t Spidey faced these Super Apes and their Russian master before? Wasn’t there a story where etc. etc.?” The geek in me needed to confirm, so I was very happy to see that previous issue referenced later in ASM #255. Don’t ask why, out of all the Spidey issues I could recall, I remember ASM #223. It’s an offbeat issue that I have very few specific recollections of, but I feel like the bizarre nature of it--Spidey doing battle with an opponent typically reserved for the Fantastic Four on the grounds of his college--helped it stick out in my mind.

Even though this issue has little to do with that one, I still appreciated that DeFalco referenced it. To me, it would make little sense for Spidey to have a dust-up with an opponent he’s really only faced on his own one time previously and not mention it. Tiny details such as these, like recalling the events of a previous story and tethering them to the present, are part of what makes the comic book reading experience so enthralling, especially when it comes to a long-running series like ASM or even a character with multiples series and decades of continuity such as Spidey.

The story itself, like I stated earlier, feels very much like a standalone issue, with little in the way of overarching story arcs or seeds planted that would be used later...or so you might think. We’ll touch on that in the moment. This issue centers on the Black Fox, an aged cat burglar (who, surprisingly, has no connection to another Stygian-hued, sable-named feline perloiner of expensive goods), whose “final score” sees him forcefully come under the employ of the Red Ghost; the villain needs help putting the finishing touches on his evil “Cosmicizer,” one of those massive, dumb, but stupidly entertaining supervillain inventions that Phineas and Ferb parody with Doctor Doofenschmirtz’s “-inators.” But instead of wanting to dominate “The Tri-State Area!” the Ghost wishes revenge on his old foes, the FF, and compels the Fox to help him.

Right off the bat, DeFalco’s approach is very slyly goofy in an almost humorous fashion. The very first pages see a dark figure descend upon a building on a thin line and crawl down from a wall, tricking you into thinking the burglar could actually be Spidey and only revealing the ruse when the Black Fox whirls around while dramatically stating his own name. Once tricked by the Ghost, the Fox is brought into this ridiculous scheme with a massive superweapon and never asks how the Ghost funded the weapon, constructed it, or fit it inside the apartment he lives in. DeFalco and Frenz are taking these silly aspects seriously, but not in a grandiose or puffed-up fashion. Villains who talk in third person, giant superweapons, apes with powers, men who can walk through walls...beautifully constructed elements that, for comic geeks, are a dime a dozen but still add layers of amusement to these stories.

Still, DeFalco manages to sprinkle some pieces of larger arcs into this single issue. Peter references selling photos of his and the Black Cat’s fight with the Blob in PPSSM #91 to Robbie Robertson, reminding us that even though DeFalco isn’t honing in on the Black Cat aspects of Peter’s life, he remembers enough to plug this particular narrative strand. Shortly before this, Peter makes a failed attempt to establish communication with Aunt May; heck, May doesn’t even have to ward Peter off this issue--the young man is stonewalled by Nathan Lubensky himself, furious at Peter’s apparent thoughtlessness after he failed to show up at a meeting the older gentleman planned as a way to bring reconciliation between May and her nephew. These pieces are small, set aside for the Red Ghost/Black Fox narrative, but thoughtful nonetheless.

I don’t fault DeFalco for placing these subplots on the back burner for the moment; so far, he’s done a pretty decent job juggling Peter’s familial struggles with his supervillain match-ups over the last handful of issues, so for an issue that’s really meant to be a standalone narrative, I can see where DeFalco doesn’t want to waste much page space on these strands.

DeFalco also teases one other significant development in a moment I sort of “mentally missed” the first time I read it: Peter’s costume. After establishing it as a cool new set of threads for the hero, DeFalco finally inserts some development in that particular plot by having the costume move...all on its own. As Peter sleeps, the inky, dark outfit slips towards him, ready to engulf the young man. For now, this is the only hint from DeFalco that the costume is more than it seems to be, but the moment represents a progression for the costume and its eventual transformation into something darker. Again, like with Peter’s troubles with Aunt May, nothing gets resolved this issue, but the tease shows how at least one writer, at this stage, had an inkling of an idea of how to move forward with the "Alien Costume" aspect of the Saga. 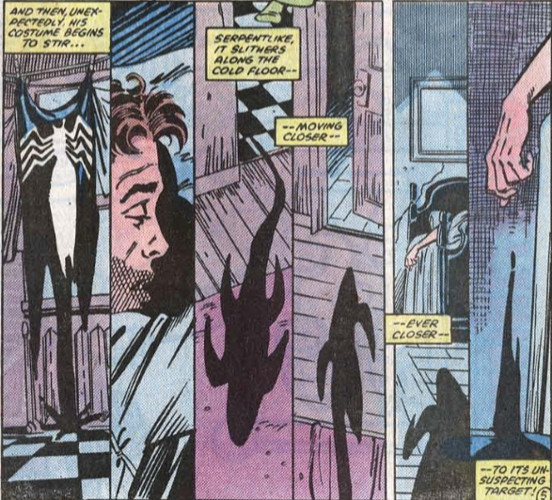 One place where DeFalco’s “setting aside subplots” strategy works marvelously comes in the issue’s final page, in an epilogue of sorts that centers on the stolen battle van Spidey tried to keep Jack O’Lantern’s men from pilfering in ASM #254. A shadowy figure crushes a small spider-tracer Spidey had planted on the van in the previous issue, bemoaning Spidey’s failure to show up (hmm, Peter’s been doing that quite a bit, hasn’t he?). Teased as the Hobgoblin, this epilogue is the first real indication from DeFalco that the master supervillain is alive and well and hoped Spidey would appear so he could crush the hero once and for all.

This epilogue may serve as my favorite page in the entire issue, since it turns the whole narrative on its head. If fans reading this issue are like me, they may have sighed a little when Spidey’s plans to hunt down the battle van are upended by the Black Fox and the Super Apes. How many times has Spidey swung off into the middle of the city, completely focused on a specific mission, only to be diverted from one other distraction? Fortunately, the Hobgoblin tease at the end takes this cliche element and gives it a face-lift--were Spidey to follow through with his intentions, he may very well have ended up in some pretty hot water. DeFalco, thus, takes what some fans may view as a method of keeping the Hobgoblin plot at a slow boil and gives it narrative sense. 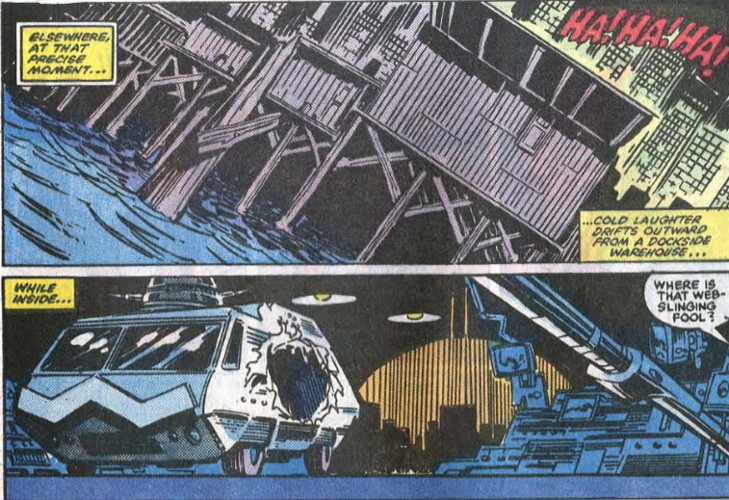 Single issues can often be seen as “filler,” one-and-done narratives designed to give the writer, artist, and audience some breathing room before getting deep into the middle of another larger arc. So far, we’ve seen that DeFalco and his artists are very capable at crafting entertaining, one-off yarns that sneakily manage to add in elements from bigger storylines without coming off as stuffing narrative down the throats of readers. Goofiness abounds in ASM #255, and perhaps it was done to cover up the fact that what we’re reading is a “breather” issue, but I’ll take an entertaining distraction over a dull story arc any day.