Spider-view: “The Hunters and the Hunted” (Cloak and Dagger, Part 5) 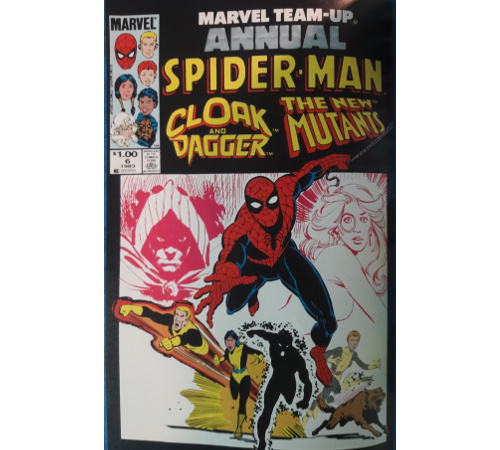 With a title that sounds like it should probably be a story about a certain lion pelt-garbed Russian hunter, this Marvel Team Up Annual instead features two protagonists I’ve been yapping about quite a bit lately: Cloak and Dagger. Of course, it shouldn’t come as a surprise to anyone that this means the Amazing Spider-Man makes an appearance himself.

Interestingly, the wild card in this issue is the team of young homo superiors called the New Mutants, an offshoot of the X-Men. I know next to nothing about these costumed kiddos, other than they appear to have been crafted to resurrect the concept of a teenage team of X-Men characters, now that the original five X-Men (Cyclops, Iceman, Marvel Girl, the Beast, and the Angel) were all grown up and Chris Claremont’s new team (Colossus, Storm, Wolverine, Nightcrawler, etc.) were already adults by time they ganged up together. Whatever the case, this annual then also features Sunspot, Cannonball, Wolfsbane, and Psyche.

We’ve got ourselves a congregation of do-gooders to chat about, so let’s see how our friendly neighborhood Web-Swinger, duo of darkness and light, and team of teenage mutants collide.

“The Hunters and the Hunted” 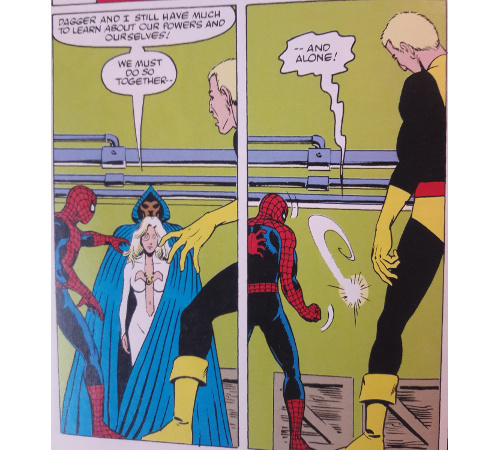 Published the same month the first issue of Cloak and Dagger’s solo series was released, MTUA #6 seems to place after the vigilante duo's limited series. Appearing in the Holy Ghost Church overseen by Father Delgado, who prominently featured in their solo series, Cloak and Dagger appeal to to the priest for sanctuary again, implying they’ve spent time at the Church and then left. Readers not aware of that initial series may be confused by the use of Father Delgado and the Holy Ghost Church, but the priest’s hand in the plot is so minor that anyone unaware of the previous series may not have no problem brushing the “missing” details aside.

I was actually impressed that Mantlo decided to incorporate a bit of the mythos he injected into the Cloak and Dagger limited series. Interestingly, nowhere does the issue solicit that series (perhaps an ad for the series existed in the original issue, but since my copy of MTUA #6 is included in a trade, I do not have the luxury of confirming that); there’s no text box positioned in a bottom corner of a panel by an enthusiastic editor encouraging readers to check out “The new Cloak and Dagger series--out now!” Mantlo’s reference to the series and its characters feels seamless, a simple acknowledgement that Cloak and Dagger have lives outside of their regular appearances in Spidey-led titles. This means the characters feel like they’re incorporated in this issue because Mantlo actually wants to use them--which makes sense, since he created them--instead of shoehorning them into the issue because he had a series he also wanted to sell. 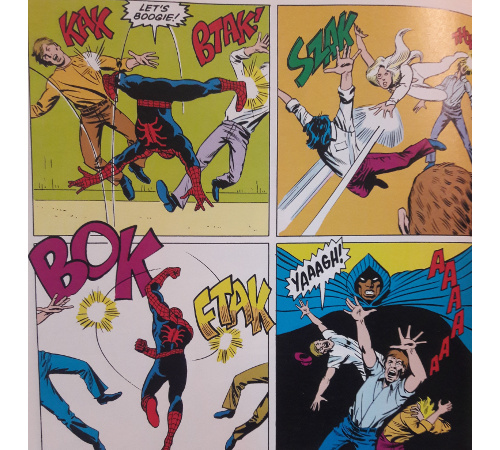 The story within the issue is not overly remarkable. As we’ve come to expect from Spider-Man/Cloak and Dagger team-ups, the central conflict revolves around drug dealers and the devastating, lethal impact their narcotics have on unfortunate teenagers who they test their drugs upon. We’re given scenes of Cloak and Dagger utilizing their powers, though wisely, Mantlo forgoes much of the drama associated with Cloak’s abilities. Most times, a criminal enfolded within his cape comes out shivering, numb, and barely able to speak. This time around, Frenz and Dzuban offer several wordless panels depicting a showdown where Spidey and the duo of darkness and light take on an assortment of gangsters. Interspersing panels of Cloak’s cape and Dagger’s knives and agility with Spidey’s own prowess, nimbleness, and webbing works against the often static, repetitive nature of Cloak and Dagger’s own abilities. The scene, though short, is one of the more dynamic action sequences I’ve seen yet with Cloak and Dagger, bereft of boring repetition.

Lest we forget the New Mutants, this small, ragtag team of powered teenagers feels slightly off-putting as they enter the tale. Mantlo introduces them well, as a group of teenagers wanting to take the night off from superheroics and training at Xavier’s School for Gifted Youngsters and tour New York. The relatability of kids wanting to see a play or going to a video arcade, though somewhat dated in certain respects, brings these otherwise empowered people down to a human level, with interests and hobbies merely beyond saving the world. It’s when they come into contact with the main narrative, as Sunspot and Wolfsbane are kidnapped by members of the same organization that unknowingly bestowed superpowers upon Cloak and Dagger, that the plot becomes a tad dicey. 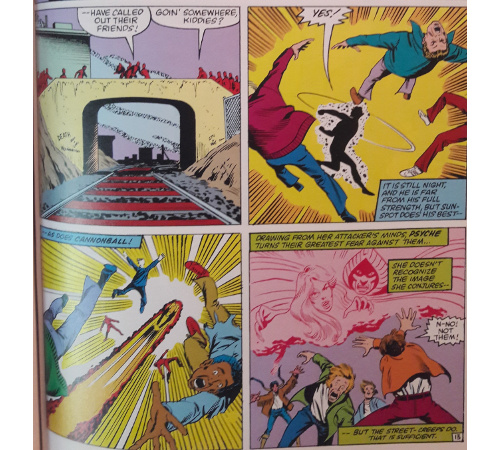 I actually don’t mind the “kidnapping” portion of the tale. It hinges on coincidence, to be fair--the New Mutants run into a gang of local toughs and engage in a surprisingly balanced fight with them, leading to Sunspot and Wolfsbane becoming separated from the rest and rendered unconscious before being picked up by a couple of shadowy figures. Lucky as it is for these events to work out in favor of the kidnappers, Mantlo writes it in a way that comes across as plausible as it can be within the confines of comic book logic. The part that becomes more difficult to swallow is when the remaining New Mutants, Cannonball and Psyche, seek shelter in the same church that houses Cloak and Dagger. From here, Spidey enters the scene and teams with the other teens. Spidey’s appearance is, fortunately, less awkwardly entered into the story, as he followed Cloak and Dagger to the church after their tussle with the drug thugs. Nitpicky as it may be, my “plot convenience sense” startled rattling the moment Cannonball and Pysche entered the church. 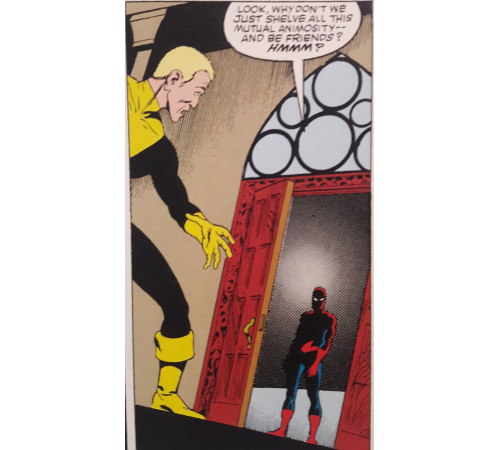 Spidey’s inclusion in this tale is, actually, a nice improvement over some previous Mantlo-penned stories. He’s placed slightly on the backburner to give room for scenes with Cloak and Dagger and the New Mutants, but his participation in the story feels weightier. In past tales centered on Cloak and Dagger, Spidey would happen to just bump into them and spend time fighting them, convincing them to stop killing drug dealers and mob lords, or scratching his head in bewilderment whenever they vanished. In this issue, Spidey seems more focused, more intentional in teaming up with them, and more aware of who they are and what they can do. Heck, when Cloak teleports himself and Dagger away from the church, causing Psyche to exclaim in surprise and Cannonball to look on in astonishment, Spidey replies, “Yeah, they do that a lot...” A wonderful little joke Mantlo puts in, driving home that our hero is now, perhaps begrudgingly, familiar with the characters and their tactics.

One other entertaining concept Mantlo includes is the return of the group that accidentally gave Cloak and Dagger their abilities. Seeking easy yet illegal capital gain through selling drugs, this unnamed gang hits upon an amusing idea: since they were the ones who gifted Cloak and Dagger their abilities, they should be able to replicate that formula, right? If so, they could create a legion of superpowered teens who are not only hooked on their drugs but serve their needs as well! Diabolical! Mantlo dips into his original take on Cloak and Dagger and pulls a strand to create a new plot thread here, organically introducing a new vein of conflict that feels balanced precisely because it’s connected to the past. Manto doesn’t just whip up a new plot or new villain and unceremoniously dump them into the middle of the story; indebted to his prior creation, he rejuvenates concepts he’s used before by giving them a new home, albeit a small one, in this issue. 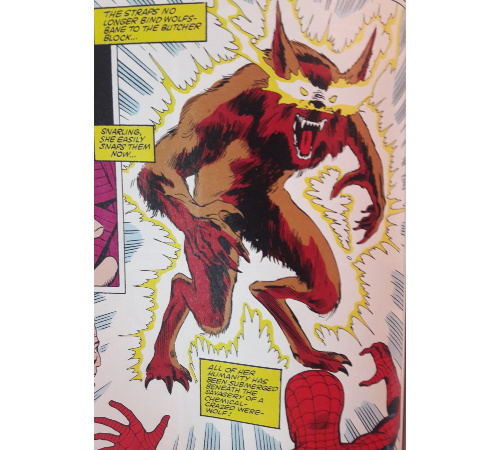 The rest of the story, though entertaining, is undoubtedly predicated on coincidence and tropes you’ve witnessed before, even if Mantlo takes them in slightly different directions that we’ve seen in the past. Nobody really grows as a character or undergoes any internal transformation--a few characters experience an EXTERNAL transformation, but that’s part of the plot I’ll leave undisturbed, should you choose to peruse this issue yourselves--and we’re not given much additional insight into the minds of Cloak and Dagger or Spider-Man. If anything, I learned a tad more about the New Mutants and their attempts at being “normal” teenagers for the night, a plan sadly disrupted. But where coincidence and tried-and-true tropes traipse together like a couple at a ballroom dance, Mantlo also makes sure to give us hints of ingenuity. Mantlo has proved himself a more capable writer than I would have given him credit for in the past, and even if it sometimes feels like he’s resting on his laurels by applying familiar formulas to his story, his ability to reach into the bedrock of his creations and pluck out new narrative strands also indicates the passion he feels for the characters of Cloak and Dagger in particular and his willingness to explore their pasts and intentions in detail.