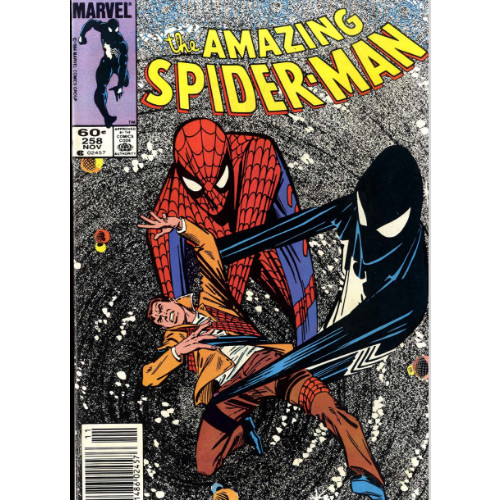 We started our intrepid exploration of Spidey’s time wearing his alien costume with a look at Amazing Spider-Man #252, the issue where the extraterrestrial outfit first debuted. Over the course of several issues of ASM, Peter Parker, the Spectacular Spider-Man, and Marvel Team-Up, Spidey has done battle with foes such as the Jack O’Lantern, Silvermane, the Answer, and Puma, fought alongside heroes such as Daredevil, Black Widow, Iron Man (James Rhodes at the time), Cloak and Dagger, and Moon Night, gotten on the bad side of criminal ganglords like Kingpin and the Rose, and tried as hard as he ever has to juggle superheroics with his personal life.

But it’s never easy for Peter: as he fights to make sense of his complicated love life with Felicia Hardy, wondering if they’re right for each other, he also wrestles with his wounded relationship with Aunt May, who has all but disowned her nephew after learning he dropped out of his graduate studies. As always, trouble rears its ugly head simultaneously for both Peter and Spider-Man.

In this issue, the situation implodes dramatically. And it only seems right that the creative duo who first introduced the alien costume brings the Saga to its climax. The Saga isn’t quite over yet, but it reaches a turning point here which will shape the Spider-Man universe forever.

ASM #258 picks up immediately where issue #257 left off, but for any parties concerned with how the last two stories we’ve examined (Marvel Team-Up #146 and Peter Parker, the Spectacular Spider-Man Annual #4) fit into the timeline, there’s no need to worry. The trades I own for the "Alien Costume Saga" indicate that MTU #146 occurs sometime halfway through #258, and I can only assume the same happens with the PPSSM annual. You may argue that the time between the first and second halves of #258 (with a transition from DeFalco indicating an unknown length of time) may not be enough for the events of both stories to unfold, but as general as DeFalco’s indication may be (“Sometime later…”), it at least doesn’t break or contradict the timeline the way Al Milgrom has on a few occasions. Any fuss to be made is easily set aside. We can proceed assuming MTU #146 and PPSSMA #4 are nestled within the timeline of ASM #258.

As we saw at the end of ASM #257, in the wake of a battle between Peter and new foe the Puma, Mary Jane (who recently rejected a marriage proposal from Peter) reveals that she’s known for years that Peter and Spider-Man are the same person. It’s a retconned plot twist that could have seriously damaged the character, if written poorly. I mean, how many times has Spidey’s identity either been revealed or learned by enemies and supporting cast members? Did MJ really have to find out as well? While DeFalco doesn’t have much time to revel in this surprise announcement--MJ flees the scene once Black Cat appears, basically conforming for her the truth of Peter’s dual identity--he still handles the revelation well. Though sudden, it’s a plot point that will be fleshed out and form the crux of Peter and MJ’s relationship down the line. You might think that DeFalco would want to spend more time on this twist and explore the ramifications from this sudden revelation, but he wisely places it on the back burner. His focus for this issue is the costume, finally unraveling its secrets, and so the MJ subplot can be examined later. 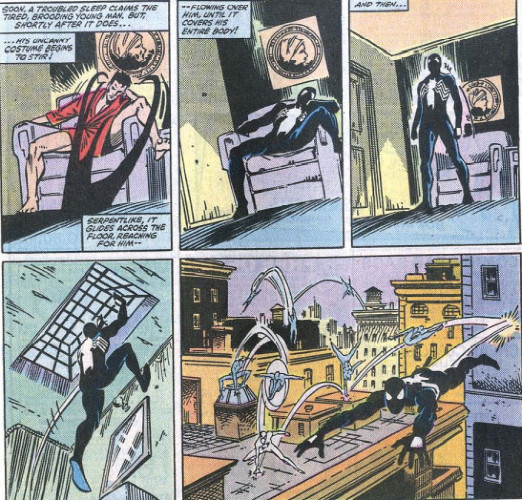 DeFalco’s use of situational conflict in this issue is a delight, bringing to light the slightly adapted maxim that “whatever can go wrong for Peter Parker will go wrong for Peter Parker.” If having MJ reveal her dark secret and the Black Cat’s sudden appearance isn’t enough, Peter soon learns from the Fantastic Four’s Reed Richards that his new costume is--duh! duh! duh!--alive! Having known about this conflict with the costume years prior to actually reading this issue, I was surprised to see how well DeFalco handles the reveal. The "living costume" angle certainly explains a lot: Spidey had felt more tired than usual because the alien had been taking him on nightly joy rides around the city while Peter was still asleep. DeFalco has Peter react to the news with appropriate levels of fear and worry, scrabbling to get the costume off before it becomes permanently bonded to him. You genuinely feel his terror and his fear comes across as relatable--how the heck would you or I react if we were told by one of the smartest guys in the world that the costume we believed was synthetic extraterrestrial cloth was actually a living organism draining us of energy and seeking to take over our physical form forever? There’s no over-the-top bemoaning his lot, there’s no guilt in wishing he had acted sooner. There’s just the desperate yet fruitless struggle to tear the costume from himself and a plea for Richards to remove the costume from him when Spidey’s own efforts fail him. 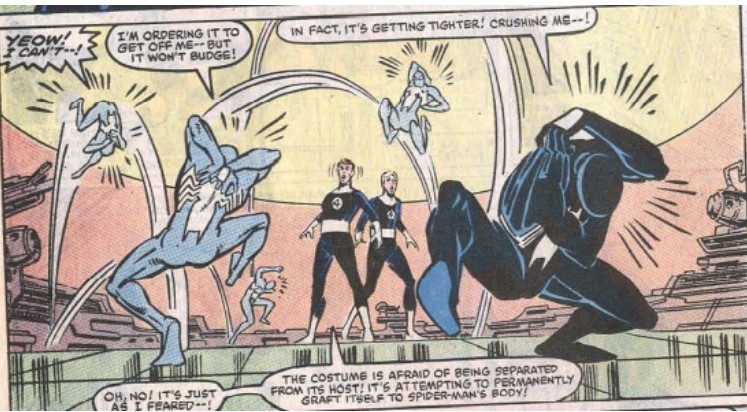 Masterfully written as this dramatic scene is, DeFalco manages to squeeze some decent humor into the story as well. Once the alien costume has been removed, Spidey is gifted with a spare (and apparently outdated) FF uniform and a paper bag to serve as a mask so he can get home. Unfortunately, since Spidey has been so reliant on the costume for his webbing, he doesn’t even have his web-shooters to swing across the city! Again, DeFalco creates an entertaining, embarrassing situation for Spidey to find himself in and deal with. The icing on the cake is the “Kick Me” sign Johnny Storm has taped to Peter’s back, something nobody comments on during his trek back to his apartment. This tiny detail, penciled in by Ron Frenz and left unnoticed by even Spidey, may be minor, but it ends up being a hilarious gag for the last third of the issue. DeFalco doesn’t even mention that the Torch left it there, leaving readers to make the implication for themselves and smile or perhaps chuckle at the visual gag. You know Johnny did it. You just know.

In between the rip-roaring reveals are smaller scenes depicting Thomas Fireheart returning to New Mexico and a newly returned Hobgoblin showing off his combat prowess for the Rose. These scenes, though serving as continuations for other Spidey-centric subplots, don’t feel nearly as important as the grandiose tale DeFalco is spinning around the black costume; as temporary diversions, they generally work in the present moment they are depicted. I can’t speak, however, to how decently they figure in elements used in later stories--I can’t tell you if DeFalco, who genuinely seems interested in the Puma character introduced in the last ASM arc we examined, builds anything more around Fireheart’s narrative path, nor can I tell you how much of his Hobgoblin/Rose interactions influence future stories. I have a difficult time keeping all the Hobgoblin lore straight in my head, as chunks exist that I haven’t read yet and I don't remember details about pieces that I have read. Right now, off the top of my head, I couldn’t even tell you if the Hobgoblin presented in these scenes was Roderick Kingsley or his brainwashed dupe, Ned Leeds.

These scenes, though perhaps important in the long-run, don’t have much impact on the current story being told. They aren’t distracting, nor do they detract from the overall enjoyment of DeFalco’s story, but they aren’t the primary focus. Much like DeFalco’s brief use of MJ in this issue, the Hobgoblin and Puma subplots are white noise, information planted by DeFalco to keep you interested in future plans while remaining fully engrossed in the current narrative.

It should go without saying the multiple ramifications this issue has on the future of Spider-Man lore: here, the symbiote’s weaknesses to fire and sonics are first displayed, and while it’s never stated directly that these two elements cause pain for any specific reason, these will remain the chinks in the creature’s armor for the next couple decades. The issue also ends with the symbiote filled with rage and beginning to hate Peter Parker, sowing the seeds for a future vengeance-driven supervillain we know today as “Venom.” Though neither of those pieces--the exact weaknesses of fire and sonics and the birth of the hatred that will fuel Venom--are intentionally created here, readers familiar with Venom and his mission of revenge will certainly take note. 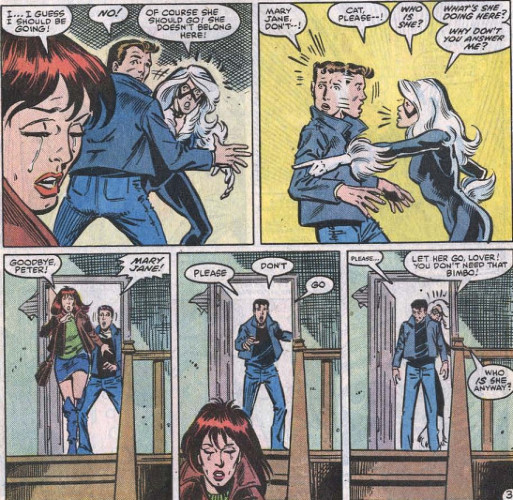 DeFalco creates a fantastic issue that checks most of the boxes for a classic Spidey adventure. Problems with women? Yep. Things going from bad to worse for Peter Parker? Oh, absolutely. Humor and action intertwined? Of course. The only thing lacking is a big superhero/supervillain showdown, but I would argue this issue doesn’t necessarily need a fight to improve its impact. The struggles are largely internal; the only external fights are between Peter and the symbiote and a quick match between Peter and some crooks while the former heads home in his new FF jammies. This is an issue built upon plain, reliable storytelling--good character interactions, well-constructed conflict, snatches of humor here and there, hints at stories to come--that marks both the ending of a chapter in Spidey’s history and an opening for a character that will haunt our hero for decades.