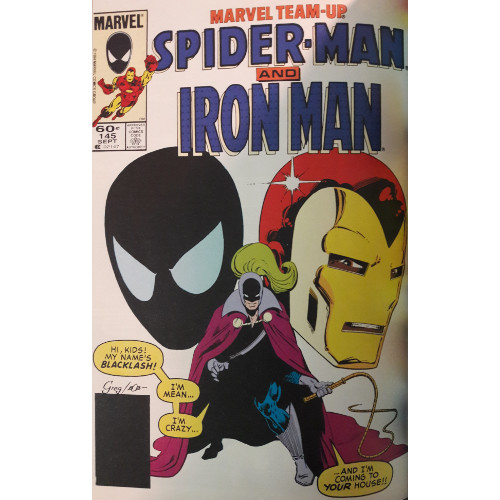 In late 2019, a little movie came out about a down-on-his-luck man with few prospects and a grim future who descended into villainy and violence. Some guy named Joaquin Phoenix won an Oscar for portraying the unfortunate fellow depicted in said film. It’s called Joker. Maybe you’ve heard of it?

A couple decades prior to the release of this award-winning masterpiece, Marvel Team-Up ran with their own version of the idea, but with a twist. Instead of a man descending into villainy, they wanted to tell a tale that shows a villain trying to ascend to manhood. Can someone whose life has already been effectively ruined by themselves crawl out of whatever grave they created?

It’s this question that MTU is all set to tackle as we head into a tale that, surprisingly, alters focus from many of the hero-centric stories we’ve examined so far. 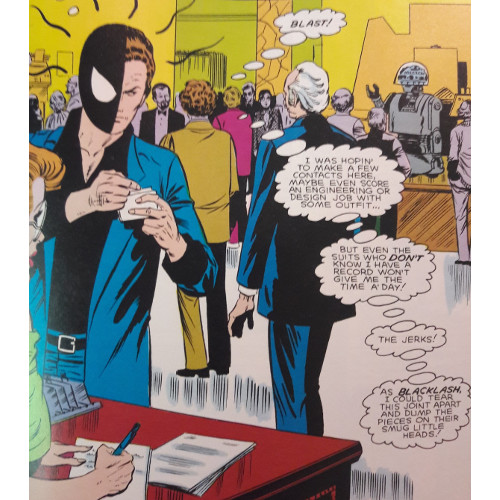 From the very first pages, Isabella and LaRoque promise their readers a different kind of comic. “This is a story, an examination, if you will, of the super-hero’s opposite number...the super-villain,” captions on the issue’s second page boldly declare. The premise may be laid out blatantly from the beginning--and I will not hesitate to mention that I do wish Isabella had kept his intentions a bit more implicit--but it’s hard to argue that the creators fail to successfully flesh out their concept.

Most of the story follows Mark Scarlotti, a villain known as Blacklash. In his criminal guise, Mark worked for the Maggia (Marvel’s version of the Mafia) and faced Iron Man a handful of times, defeated by Shellhead in each confrontation. Kicked to the curb by the gangsters he worked for and resorting to coming to his hometown in search of employment, Mark is in a bad spot: no job, no money, no opportunities. His criminal past has left him little in the way of career choices, he’s so broke he has to use public transportation, and his only friend is a local security guard. Even his mother won’t let him stick around for very long, primarily for fear of how her husband will react. 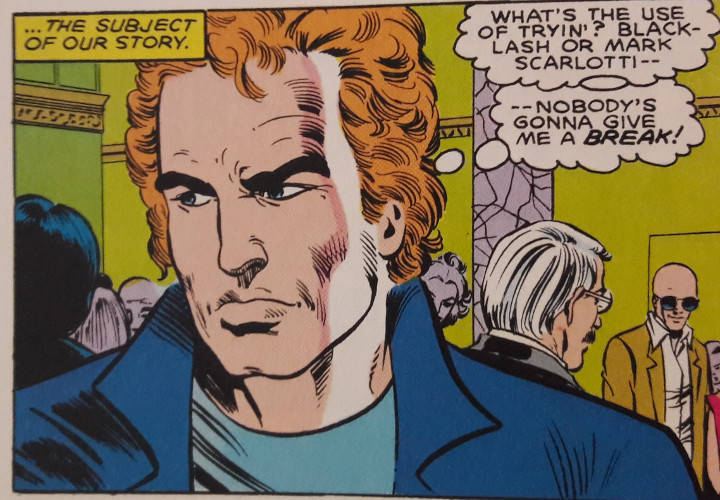 Similar to how Todd Philips constructs (or deconstructs) Arthur Fleck’s journey and transformation in Joker, Isabella and LaRoque present a man imprisoned by his choices and environment. Isabella works to make you feel for Mark’s plight, for his lack of options and sore lack of friends, but makes it clear that most of his unhappy state comes from his own past decisions. Interestingly, Isabella makes Mark mostly unrepentant about his harmful life choices--towards former friends, he feels no remorse for his actions--but a single smidgen of regret comes during a discussion with his mother, where Mark reflects on how much he’s hurt his parents and attempts to apologize. His efforts are met with interruption and disgrace.

The scene between Mark and his mother is a fantastically presented turning point for the character. Much of Mark’s reflection is out of self-pity--it’s Iron Man’s fault for stopping his big scores as Blacklash and for ruining his chances with the Mafia, or it’s former coworkers who blabbed to other employees about Mark’s checkered past and cut him off from potential contacts before he even has a chance to approach them. But for a handful of panels, Mark comes to the highly insightful realization that much of the blame for his actions lies with him. It’s only when his mother denies him the chance of reconciliation that he lashes out (how appropriate) in rage. 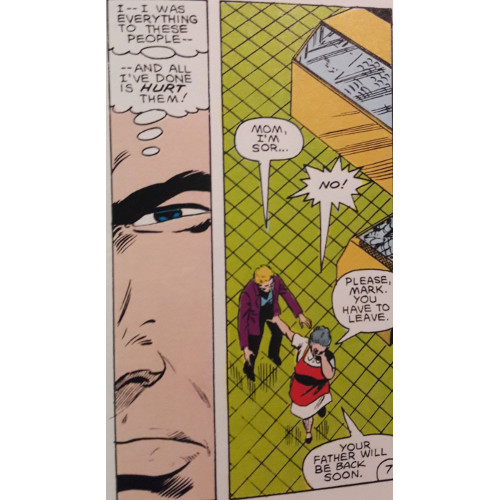 Shortly thereafter, Mark is approached by a Maggia goon and offered a chance to redeem himself. A twinge of tragedy, therefore, haunts Mark’s return to villainy, and I’m sure it’s not much of a spoiler to reveal that Mark does, in fact, don the cape, cowl, and electrified whips of Blacklash as the story moves on. Isabella, despite making Mark’s return seem triumphant at first, is not opposed to adding a dash of dark humor, as Blacklash heads to eliminate a target: reaching a science expo where a famous scientist is receiving a prestigious award for breaking up a gang of Maggia hackers, Mark is forced to use his weaponry against the security guard protecting the scientist. The man in blue just so happens to be Mark’s only friend. Blacklash is not in the least fazed by this decision, but it’s one that certainly demarcates a line crossed.

I noticed this in Joker as well: as sympathetic a character as Arthur Fleck is, there came a point in the film where I could no longer feel as strongly in his favor. The scene in question witnesses Arthur kill a former coworker in truly horrific fashion and represents Arthur passing from being seen as a misunderstood victim of society to a monster in clown makeup. Blacklash’s act of violence against his friend, though not nearly as gruesome or fatal, works much the same way. Isabella doesn’t intentionally goad you into thinking that Mark could truly turn his back from villainy at any point--the cover, as you can tell, prominently displays the man in his supervillain get-up--but any remaining sympathy you may have for the character is reduced to embers by this scene. By injuring his friend, Mark erases the final piece of his life prior to his supervillain career, severing any hope of rehabilitation and a new lease on life. 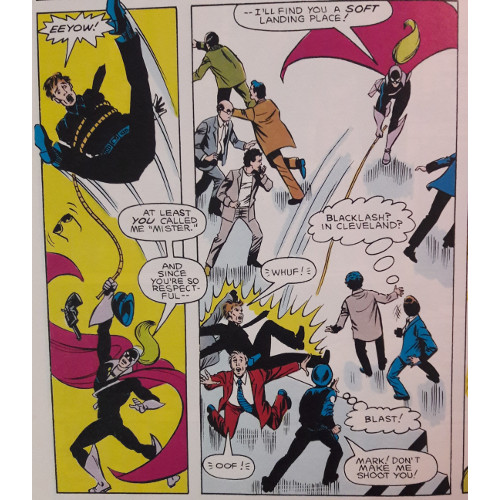 It should not surprise us, in a story so focused on the criminal aspect, that little attention is paid to our top-billed heroes, Spidey and Iron Man (Jim Rhodes at the time, much like in Marvel Superhero Secret Wars). Entertainingly, Isabella finds reason for both to appear at the science expo--Rhodey to serve as Iron Man for publicity reasons, and Peter to snag some photos on a Daily Bugle assignment. Is it largely coincidental that both heroes would happen to be at the same place at the same time, just as a supervillain makes his dramatic return to crime? Absolutely. The nice thing about this coincidence, however, is Isabella pays little attention to it. I’ve noticed that, in several instances where events occur coincidentally in comics, characters will point out the seemingly random happenstance, as if mentioning it lessens the impact. Oftentimes, the act of drawing attention to the coincidence only makes it more awkward. Isabella, wisely, remains silent on that point; he simply has his characters show up, leaving you, the reader, to roll your eyes or accept it at face value, whatever you choose. 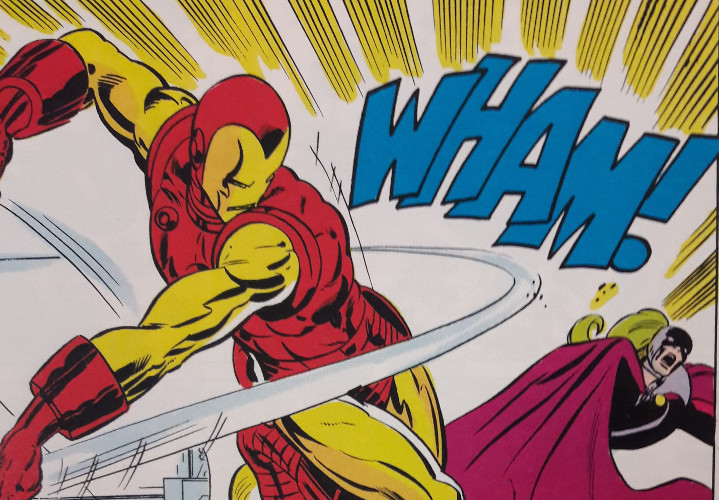 Spidey and Iron Man’s roles in this tale, diminished in comparison to Blacklash’s, still serve a purpose. Together, they defeat the villain, stripping him of his weapons and leaving him to wallow in yet another failure. The final fight scene is, actually, done nicely by both Isabella and LaRoque: you don’t necessarily feel cheated that you spend such little time with your heroes, since it’s been outlined from the start this issue is prominently about Mark. After following Mark through his struggles, and after the build up to the story’s climax where Blacklash is about to murder the scientist, our heroes’ sudden arrival is almost comical. In the back of your mind, you know they’ll come in at any moment, even if Mark is fully unaware of Spidey’s presence, and it’s this anticipation which keeps you reading, waiting for the battle royale to begin. Also humorously, Mark seemingly forgets that Iron Man is attending the expo, even though he gloomily observed the metallic man earlier in the issue. 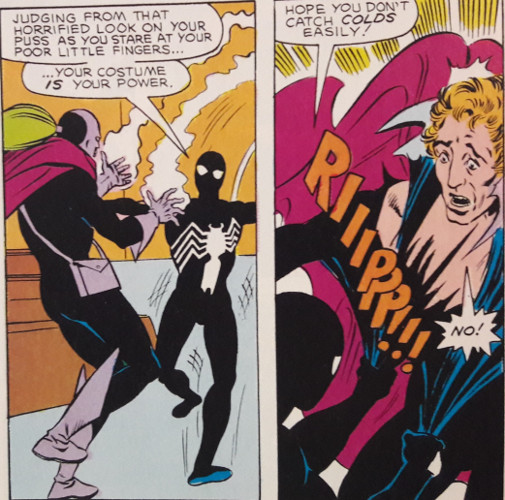 Mark’s story ends how it began: with a man, stewing in his selfishness following another defeat at the hands of powerful men. But this time, he’s lost everything--he’s effectively betrayed the trust of the one man who tried to be his friend; he can kiss any chance of getting in good with the Maggia goodbye; and not even his mom will answer his phone calls. And yet, even at this incredibly low point, Mark is still disillusioned. Isabella ends the story with the man scheming a triumphant return, just like before. Next time will be different, he thinks. Once he’s out, he’ll get a job, impress his mom, make something of himself...never realizing the maddening cycle he’s trapped himself in.

Is Mark’s tale a happy one? No, not necessarily. Your typical superhero epic--in which our colorfully costumed protagonist punches villains and saves the day--is swapped for a grimmer narrative. In doing so, Isabella swaps out cliche happy endings for something a bit more poignant. MTU #145 is an eerie portrait of a man who can’t quit making wrong decisions, who’s obsessively guided by selfish impulses, and whose feeble attempts at righting a sinking ship leave him floundering in an open ocean, with no shore in sight and nowhere to go but down.