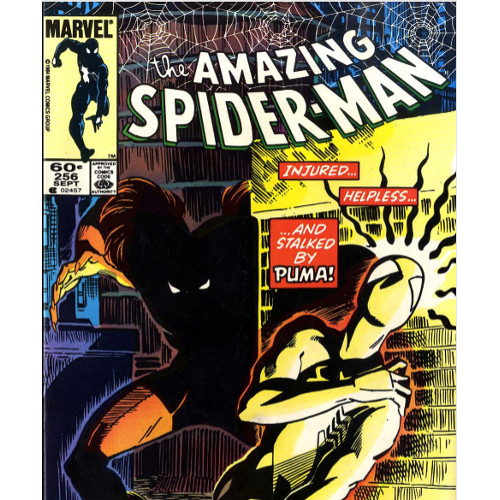 After a short break from following our hero's main series, Amazing Spider-Man, we return to Tom DeFalco and Ron Frenz’s run on the title. Last time, Spidey faced off against the Soviet supervillain known as the Red Ghost of “and his Super Apes!” fame; since then, our hero’s squared off against the White Dragon and Blacklash in a few Marvel Team-Up issues and bumped into the sinister Answer, a henchman in the Kingpin’s employ, as introduced by Al Milgrom in Peter Parker, the Spectacular Spider-Man. Milgrom’s most recent story arc ended with a cliffhanger, with the vigilante Dagger kidnapped by the Answer.

DeFalco takes over from here, and though the issues we’ll be examining have no connection to Milgrom’s aforementioned story arc, it's still the next chronological step for us to explore Spidey’s adventures. So just imagine that Dagger is languishing somewhere in the Kingpin’s vile clutches until we return to Spidey’s sister series. With that pleasant thought in mind, why don’t we trek into this two-part tale that introduces us to a new villain/eventual Spidey ally and anti-hero who is another honorary member of the “Spidey Characters Themed After an Animal" Club.

“Beware the Claws of Puma” 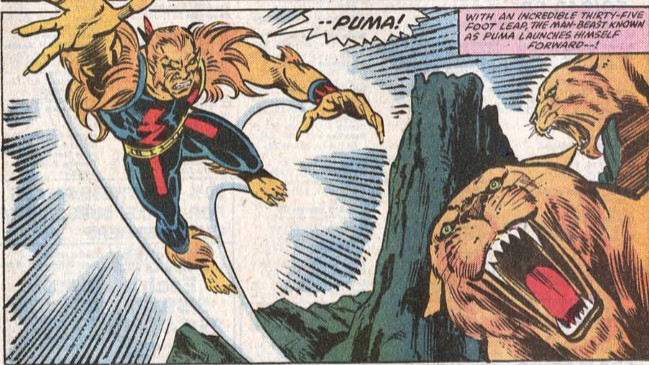 As previous ASM entries in the “Alien Costume Saga” have demonstrated, DeFalco is a master at crafting conflict. Whether it’s catalyzing tension between Peter and Aunt May by revealing Peter’s recent decision to drop out of his graduate studies, or having Spidey face supervillains such as Jack O’Lantern and the Red Ghost, DeFalco has been injecting his stories with enough physical combativeness and emotional outbursts to satiate any fans of Spidey’s adventures. There’s enough action to keep readers hooked while also providing a decent amount of soap opera-style subplots to add a layer of humanness without making ASM feel too mushy.

DeFalco’s penchant for ramping up the stakes continues in earnest with this issue as he introduces Puma. Real name Thomas Fireheart, the Puma is a businessman of Native American descent who also protects his tribe as a half-man, half-puma hero. Capable of leaping with enhanced agility and blessed with greater strength and heightened senses (so, Daredevil, but with sight), Puma is brought to New York on behalf of the Rose. DeFalco wonderfully takes a concept seeded by Milgrom in his most recent PPSSM arc—that the Rose isn’t just another mob boss but answers to the Kingpin—and plants it in his own title, crafting some decent conflict between the Rose and the Kingpin.

You can tell that DeFalco had fun creating the Puma, as he carefully weaves in elements of the character’s history without revealing too much. From these two issues, we learn that Puma not only defends his tribe but moonlights as a mercenary and an assassin, has an uncle who lives on a Native American reservation, and employs a personal assistant who is aware of his furred activities. I felt a few Batman parallels from Puma’s introduction, but DeFalco makes his character distinct from the Dark Knight Detective and any other potentially specific similarities (dead parents, crazed arch enemies, money siphoned from his coffers into his nighttime activities) don’t appear here. Puma, with his Native American background, feels unique, and I got the idea that DeFalco was introducing the character not as one-and-done adversary but as someone he hoped to flesh out periodically.

Puma brings a shot of physical conflict to the story arc as he tails and attacks Spidey, proving to be a capable warrior against the black-suited superhero. DeFalco doesn’t spend a lot of time remarking on the character’s abilities, but he cements Puma as a tracker or hunter, his senses refined enough to catch Spidey’s scent in the heart of the bustling Big Apple. Puma and Spidey wage two fights in this issue, neither one definitively won by either side. Normally, as I’ve noticed, fights that end in a stalemate usually happen because of some wayward, random element pitched in by the writer, a deus ex machina that has no reason to be there or has little to do with the actual story being told. It feels like a cheat, in other words. DeFalco narrowly escapes this sentiment twice. In the first battle between our two adversaries, Spidey’s down for the count after wrenching his arm out of his socket (and, in a brilliantly written and illustrated series of panels, popping the dislocated shoulder back in place), needing the Black Cat to come and save him from Puma’s claws. The save doesn’t feel like a cheat, as DeFalco has seeded Felicia’s presence into the story previously, meaning it makes sense for her to be in the area to save Spidey. In addition, Felicia’s short skirmish against the Puma is a wonderful display of her “bad luck” powers, and I’d argue that, in comparison to Milgrom, DeFalco has an equal or better handling of her abilities.

The second brawl is another brutal battle between the Peter and Puma, especially considering how badly Spidey’s been injured. He holds his own for a while but escapes through what might amount to sheer luck, as the Puma turns back from the killing blow, having decided Spidey to be a valiant opponent deserving of a more honorable death. Not quite as fluid or meaningful as the Black Cat rescue, this second “save” nevertheless hinges on the character qualities DeFalco has already given Puma--someone who wages war honorably and seems to feel an inner schism between his mercenary duties and honor-bound oaths.

Entangled in this story is Spidey’s relationship with two important women in his life--silver-haired Felicia Hardy and the red-headed Mary Jane Watson. Felicia’s characterization, specifically in the opening scene of this tale’s first issue, strays significantly from how Milgrom portrays her. Instead of a young woman tortured by the secrets she keeps from her Spider (such as the benefactor of her “bad luck powers” as well as the favor she owed him, as Milgrom depicted in PPSSM #93), Felicia is carefree and downright playful in these issues as she helps Spidey face a gang of armed thugs, her biggest concern being that Spidey can’t flit around the rooftops with her further. Her attitude doesn’t even seem to be a cover up for the shadows lurking within her, like she’s putting on a mask to disguise the deeper emotions roiling inside her. Rather, DeFalco hints at the secrets she keeps from Peter, but her thoughts come across less alarmed than how Milgrom depicts them. The tone DeFalco gives her--“I’d love to tell him about my enhanced athletic prowess, and my bad luck powers”--makes Felicia sound like she’s planning a surprise birthday party for Peter and is simply struggling to keep it under wraps. Compare that to Milgrom’s depiction of Felicia, who beats herself up for betraying her boyfriend by helping the Answer, and you’ve got two inconsistent portrayals of the same character. Still, Felicia comes in during the clutch when Spidey needs her, and as I mentioned earlier, DeFalco and Frenz do a great job at putting her powers on display against the Puma.

Simply a friend for now, MJ will become far more important in Peter’s life for a couple of reason, primarily because she’ll marry him in a few years’ time (at least, that’s how pre-One More Day continuity works) and also because of the bombshell she drops on Peter at the end of this issue: she knows Peter Parker is Spider-Man. And she’s known for years. One of DeFalco’s future issues will go into more detail about this revelation and how it affects their relationship, but I would argue that DeFalco succeeds in leaving us with one heck of a cliffhanger. For an issue jam-packed with tension already, this is webbing on top of a spider cake. Does the twist wholly work? Not completely--in hindsight, knowing DeFalco will reveal MJ’s backstory in a future issue and will fully explain how she learned Peter and Spidey were the same individual, the revelation is solid; on its own, without understanding the story to come, it may come off as a dramatic way of ending an already tense issue.

I don’t recall much of DeFalco’s run prior to this issue, so I can’t say whether DeFalco hinted at MJ’s knowledge of Spidey’s identity before ASM #257; however, since this is MJ’s first appearance in ASM during the “Alien Costume Saga,” I can say for certain she had no chance of subtly referencing this twist between ASM #252 and now. Even if MJ never hinted at knowing Spidey’s identity previously, what makes the twist work well is knowing how it will shape Peter and MJ’s relationship for years to come (again, barring stupid retcons). Similar to how Peter’s alien costume’s legacy extends beyond the issues we’re currently examining, what with the eventual creations of Venom and Carnage, so too does this twist decently maintain its longevity. Heck, it even survives the aforementioned stupid retcon. As a friend, girlfriend, wife, jilted lover, and eventual friend and girlfriend again, MJ has always known who Peter is, inside and outside the super suit.

Yet again, DeFalco proves to be a highly engaging storyteller, putting Peter Parker in perilous places and against dangerous dudes. Even though his take on a certain felonious, feline female may be a bit off-kilter at moments, DeFalco makes up for it by bringing in a rambunctious redhead who turns the tables on our hero in a moment he least needs it. We’ll be taking some time off ASM for a few posts--and maybe we’ll scramble the timeline again, too!--but just as PPSSM left us with a cliffhanger, so does ASM. Picture yourself as a young Spidey fan in October of 1984. Two of Spidey’s titles have just thwomped you over the head with two doozies of a cliffhanger--a damsel in distress in one and a damsel causing distress in the other. November looms large in your peripheral vision. Just 30 days until those next issues...but with luck, dear readers, we may not have to wait as long to unravel the plots our writers are preparing to finish.