Spider-view: “How Ya Gonna Keep ‘em Down at the Morgue After They’ve Seen N.Y.C.?” (Alien Costume Saga, Part 13/Cloak and Dagger, Part 6)

Largely freed from the constraints of recent continuity, Al Milgrom crafts an engaging two-parter that sees his storytelling abilities at the forefront 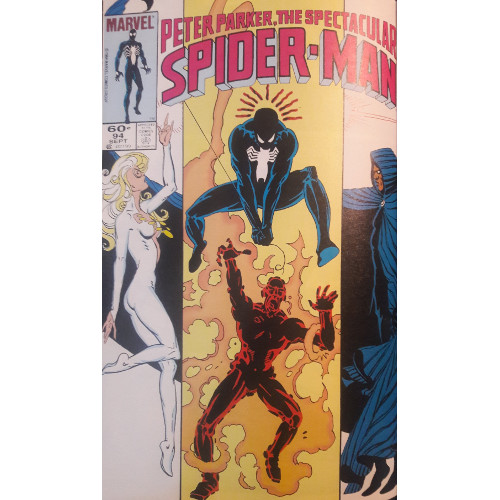 When last we examined Al Milgrom’s contributions to the “Alien Costume Saga” in Peter Parker, the Spectacular Spider-Man, our hero had just saved the life of his lady love, the Black Cat, from the sinister machinations of Kingpin’s newest superpowered henchman, the Answer. Successful, in rescuing Felicia, Spidey ended the issue unaware of two key pieces of information. First, Black Cat was never truly in danger, as the “hostage situation” was merely a ruse by the Answer as Felicia’s way of repaying her debt to the Kingpin, of which Spidey is unaware. Second, the Answer’s true goal was not to obnoxiously dangle Felicia in front of Spidey’s nose, but to acquire a body from a morgue.

With the cloaked corpse in tow, Answer returns to his master with his prize, and it is here our next two-parter begins. No matter how the story plays out, one thing is certain: Milgrom is definitely a contender for "Nuttiest Title of the Year" award.

“How Ya Gonna Keep ‘em Down at the Morgue After They’ve Seen N.Y.C.?” 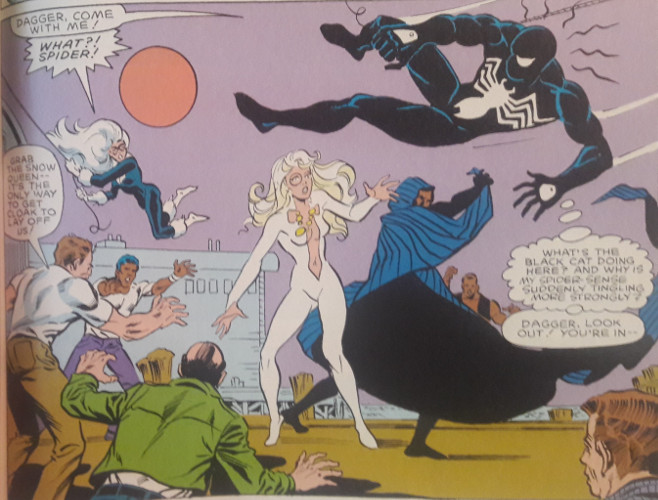 Yet again, we can pass over any disgruntlement regarding the timing of this story--while Milgrom clearly places these issues after the events of several previous stories (having Spidey mention recent bouts against the Beyonder, the Blob, Will-Killer, the Answer, and the White Dragon), that’s the only chronological reference he makes; thus, it’s very easy to mentally place this tale after all those previous issues.

For a two issue story, Milgrom packs in a lot of information and action but does so in a way that feels fluid and neatly hinges on elements he and writer Bill Mantlo seeded in past issues of PPSSM. Unintentionally, these issues actually serve as not only the next part in the “Alien Costume Saga” but also the next chapter in the adventures of Cloak and Dagger, whom we haven’t seen since Spidey teamed up with them and the New Mutants in Marvel Team-Up Annual #6. Thus, this two-issue tale feels more like a continuation of various plot developments, which certainly appeals to me as a fan who’s trying to read these stories chronologically.

Milgrom first brings back the dynamic duo of light and darkness that I just mentioned. This is, I believe, Milgrom’s first stint at writing the teenage pair (and perhaps the first time anyone other than creator Bill Mantlo has scripted their deeds of daring-do), but not his first foray into penciling them. The characters have a familiar feel about them, but Milgrom does little with the characters beyond reiterating what we’ve already learned about them in previous stories. Still, this means Milgrom’s interpretation of them hews preeety close to Mantlo’s and includes elements Mantlo introduced in their solo series, such as Cloak’s need of Dagger’s light and the Holy Ghost Church, the pair’s place of refuge. Early on, Mantlo does quasi-introduce a new concept, the fact that if Cloak doesn’t receive light from Dagger to keep his darkness at bay, the shadows could, as Cloak says, “rise up and consume every living thing on this earth.” I don’t recall Mantlo making such an outrageously powerful claim in terms of Cloak’s abilities; the idea of a “hungering darkness” within Cloak will be examined by Mantlo in further series, but the “world-threatening” aspect of it seems to be Milgrom’s idea. Does it work? Not fully. The idea certainly has merit--how would you feel if you knew something inside your chest was threatening to break free and devour the entire globe?--but it’s a one-time reference that serves the story not at all. 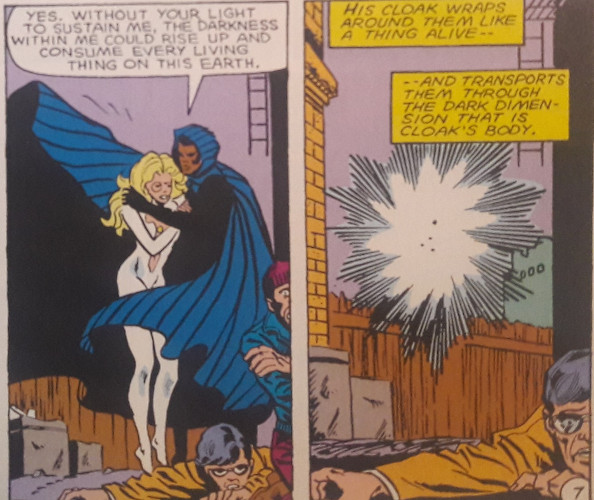 Silvermane, who Cloak and Dagger joined Spidey to fight in PPSSM #70, also makes a welcome reappearance in this series. Due to the events of his first appearance, the robotic godfather is but a shell of a shell of his former self. Retaining his impressive strength, Silvermane has been reduced to a mere zombified slave for the Kingpin, lumbering about in a Frankenstein-esque manner as Fisk sends him after a rival. Milgrom gracefully teases the octogenarian mob boss’ return, leaving you to question just who Kingpin’s new assassin may be until the turn of a page reveals the lumbering bionic gangster in all his glory. The fact that Silvermane used to be a rival of Fisk’s, as the rotund mobster proudly notes, makes Silvermane’s return all the sweeter. Milgrom could have simply had Silvermane appear in the story for any old reason, but making the gangster a mindless flunky for a former rival is the real kicker.

Speaking of rival ganglords, Milgrom also brings in Tom DeFalco and Rick Leonardi’s original creation, the purple-masked Rose, who we saw back in ASM #253. Introduced as yet another underworld madman grasping for power, the Rose is given a slight bent to his character as Milgrom reveals that our thorny friend is actually under the thumb of the Kingpin (hope the big guy doesn’t prick his finger). Yet, Milgrom teases, the Rose seems displeased with his current position, adding a dose of tension that, if I recall my Spidey history correctly, will culminate in later 80s story arcs (several of which, sadly, I do not own). 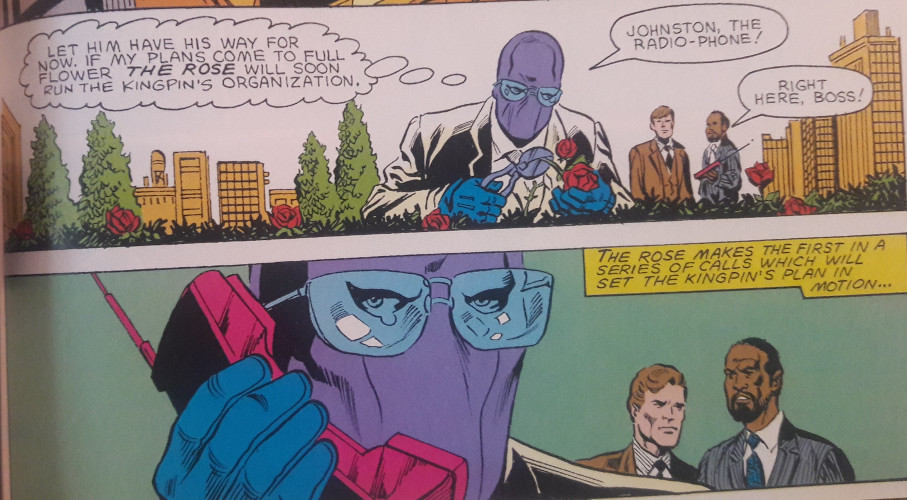 Milgrom even finds time to add to the “alien costume mystery” that DeFalco began untangling in ASM #255. Similar to DeFalco’s method, Milgrom simply has the costume cover Peter while the young man sleeps and takes Spidey joyriding through the city. Nothing happens to the character whatsoever, which confused me until I recalled the reason for these nightly excursions (which, if memory serves, should be cleared up in a few issues). Slowly but surely, the mystery of the alien costume is deepening; since Milgrom focuses so much on other story beats, the time dedicated to the alien costume is short yet adequate.

In previous PPSSM stories, I felt like Milgrom was hindered by continuity, particularly in how he sculpted the timeframe of his issues. He seemed to be playing second fiddle to DeFalco’s work in ASM, with chunks of Milgrom’s plots reacting to whatever happened over in the “big brother” title. I felt like he had to reference Peter’s falling out with Aunt May, Spidey’s arrival in New York following Secret Wars, and fights with villains such as Jack O’Lantern; by working to adhere to DeFalco’s continuity, Milgrom upended his own timeline. Narratives didn’t align, and in at least one instance, Milgrom had a transaction occur between Black Cat and Spidey that was physically impossible when DeFalco’s stories were considered.

But here, Milgrom seems to have moved past those constraints. As I mentioned, he briefly brings up past ASM and MTU issues, but solidly cements those tales prior to these PPSSM issues. Most of his work in PPSSM #94-95 is more creative, roping in stories from yesteryear (by this point, Silvermane had been a robot for two years and Cloak and Dagger had been around for about that long as well) to mesh with some of the more original elements he’s introduced, like the Answer. As a result, Milgrom is able to create a story that feels distinctly his own, indebted to the somewhat later past rather than recent events. 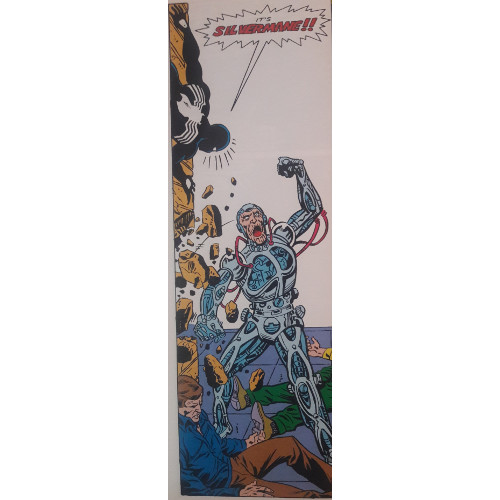 The tale Milgrom tells is, as most stories are, not without its shortcomings. When it becomes clear that the mindless Silvermane is in search of Dagger, Kingpin sends the Answer to locate her first. His reasoning for doing so is never spelled out--in fact, it seems like the Answer more so chooses to take on the task himself--but as the search progresses, the Answer offers a distinct reason to locate Dagger before others can. This culminates in a fairly entertaining sequence, where several parties--including Silvermane, Cloak, the Black Cat, Spidey, and several of Rose’s associates--all grapple over Dagger, some to save her, others to harm her. But while the Answer’s role becomes key in this, his initial motivation for seeking her out (perhaps to get her before Silvermane can?) is not made clear. I actually turned back a few pages to see if I could discern his motivation, coming up empty. It seems like Mantlo simply needed the Answer to be on the scene when Dagger arrived and thus cast him in the role without fully fleshing out his motives. These intentions are, to be fair, deepened later in the issue, but not in a way that makes you believe that this was the Answer’s goal all along.

A second, slight irritation comes in form of a series of panels, kept to a single page, that depicts the goings-on of various supporting cast members in this arc’s second issue. Following a somewhat meta quip by Spidey that normal people have it really easy compared to him, we’re treated to cast members such as Robbie Robertson, Aunt May, Harry and Liz Osborn, Betty Brant, Flash Thompson, and Sha Shan, most of whom are wrestling with personal, familial, or financial problems. Each panel offers a brief snippet into the lives of these characters, perhaps too brief, and when given the “header and footer” panels containing Spidey’s jokes about normal lives, the whole bit feels awkwardly tossed in. Good information to know about these characters, but the page’s pacing suffers. It’s nice to know that Milgrom is intentional about exploring the lives of characters outside of Spidey, but I much prefer an earlier method he uses, an entire scene of Peter meeting up with Harry, Liz, and Sha Shan to discuss Flash. A few pages in length, the interaction offers decent time for the characters to speak their minds about problems and offers bits of decent characterization that the snippets do now allow. 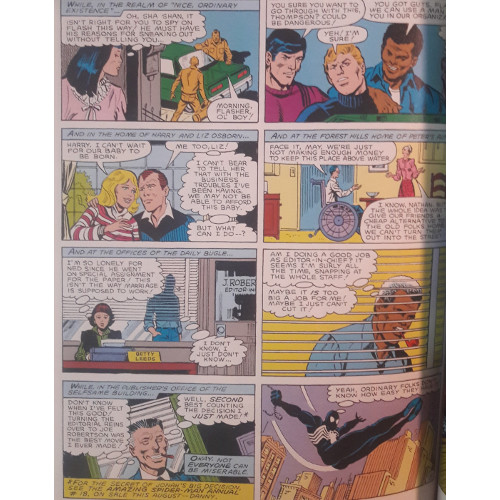 Aside from these few gripes, Milgrom crafts one of his most engaging narratives yet. Pulling the past into the present, he crafts a story that hinges on what came before it but does not necessarily need to rely on the immediate past. Pulling away from DeFalco’s timeline, Milgrom finds himself no longer constrained by the days or weeks he seemingly got confused by in some earlier issues. One can read these issues right after ASM #255 or even MTU #144 or #145 and believe these two issues came after those story arcs. With confusion dissipated, I’m able to sit back and more thoroughly enjoy the story Milgrom tosses our way.

And perhaps for the first time, we’re looking at a blog that ends on a cliffhanger; these issues’ main conflict will be resolved at a later date. Will that jumble the timeline at all? Perhaps, but for now, I’ll relish the opportunity to tease the conclusion and leave you with a “Next time, on Al Milgrom’s Peter Parker, the Spectacular Spider-Man...Dagger in danger. A wife’s life at stake. And more!”

But we’ve got a few other, rather important stories to tackle first as the “Alien Costume Saga” heats up.