Spider-view: “My Sword I Lay Down” (Alien Costume Saga, Part 11)

This standalone issue raises and explores some engaging questions, yet only scratches the surface in answering them 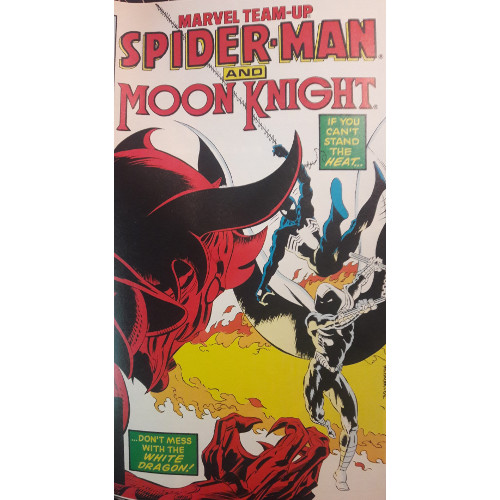 In this issue, Spidey finds himself teaming with a caped vigilante who battles criminals at night and possesses a billionaire alter ego by day.

No, I don’t mean Batman.

I’m not overly familiar with the character of Moon Knight; unlike street-level heroes such as Cloak and Dagger and Daredevil, I have not forayed into any Moon Knight series or really any issues that have much of anything to do with the vigilante. My greatest exposure to the character came from Brian Michael Bendis’ Ultimate Spider-Man series, where the character is portrayed as a vigilante with a very unfortunate personality disorder, spending a good deal of time debating with the other individuals that exist within his subconscious. I know other tales have dealt with Marc Spector’s mental state, but none of that makes its way into this standalone issue.

Dive with me like a superhero leaping off a skyscraper, as we delve into the depths of New York’s Chinatown underworld in a story that mingles honor and violence. Things might get messy. After all…

“My Sword I Lay Down” 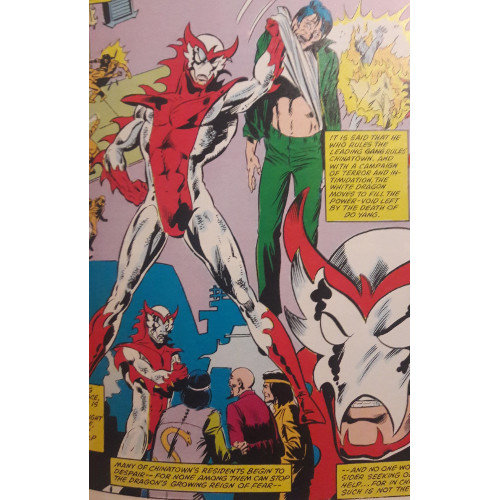 LaRoque, who provided the illustrations for the past few issues of MTU, returns for this standalone issue. His ability to convey expression is diluted here, or at least doesn’t seem quite as strong as it was in those issues. Nowhere does LaRoque get to show emotion at the level he did in the splash panel for MTU #143, where a distraught Captain Marvel openly mourns her potential fate as a being of light for all eternity. I don’t mind LaRoque’s art, but he just isn’t given the chance to do anything compelling like he did in those two issues.

Our story opens in Chinatown, where the leader of the gang known as the Tiger’s Claw has been recently murdered by the White Dragon, the sinister leader of a rival faction. Chu Yang, nephew of the Tiger’s Claw’s deceased leader, fights for supremacy of the group while the Claw turns to Philip Chang, a former classmate of Peter Parker’s, for leadership of the group. Meanwhile, as Peter visits Philip and becomes unwittingly embroiled in the conflict as Spider-Man, a somewhat unwelcome Moon Knight appears on the scene to avenge the death of a friend. 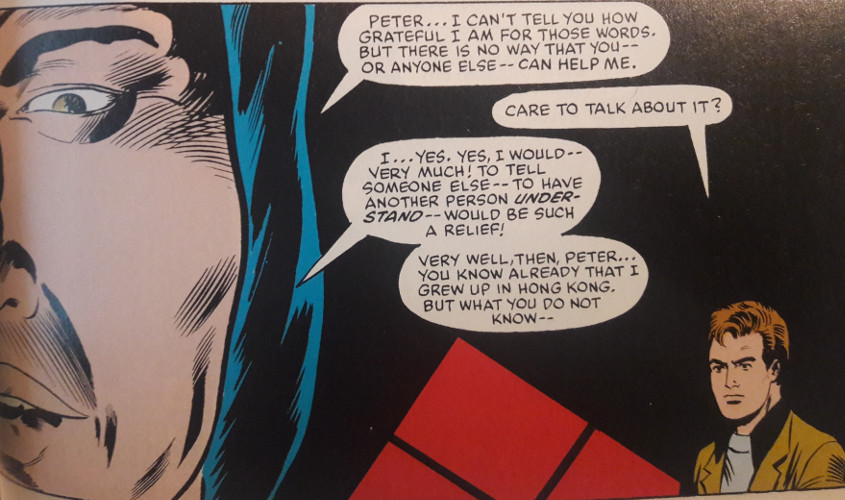 Burkett and LaRoque’s story contains heaping doses of strife, both internal and external--while Spidey and Moon Knight partake in physical combat against the Dragon, men wrestle with philosophy as easy as they wrestle with one another. Chu Yang demands to be his uncle’s replacement, to violently oppose the White Dragon and bring him and his gang down. Philip Chang denies the leadership offered him, wanting to leave behind a previous life of violence, refusing to raise his hands even to defend himself later on in the issue. Moon Knight, himself a former mercenary with a life dipped in the red pool of bloodshed, struggles with getting involved in a conflict that took his friend, as he’s told on at least one occasion that the men of Chinatown will brook no interference from outsiders.

Questions of violence and honor pepper the story--is Philip’s dedication to his non-violent oath a sign of foolishness or an honorable commitment to a personal conviction? Does Moon Knight’s insistence on being involved uphold the memory of his deceased friend or dishonor the traditions of an environment where he is seen as an intruder? These questions are only somewhat answered by the story’s end--the Moon Knight issue isn’t addressed by the public of Chinatown, but through his own assertion to bring down the White Dragon, you’re encouraged to side with him. Philip’s own small arc is given greater emphasis, and I’m going to spoil the end of it right now by saying that Philip never once throws a punch or sweeps a leg, nearly getting killed by the White Dragon; he’s only saved by Moon Knight’s interference. 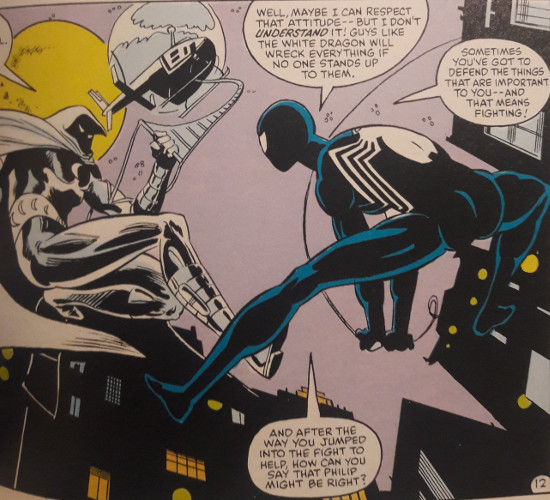 As someone who has little understanding of Chinese culture, I cannot speak to how non-violence impacts one’s honor, or how accurate Burkett and LaRoque’s portrayal of Chinatown and her inhabitants is to how people actually behave in that society. I’m also not saying that there’s anything necessarily wrong with taking an oath of non-violence to keep one’s hands as clean as they can be. I will, however, comment that I do believe that there’s a difference between non-violence and defending yourself against harm. Perhaps Philip’s oath is one of complete and utter non-violence, no matter the situation, but as honorable as this decision is supposed to make him, it does turn the situation with White Dragon into a less serious moment than it is intended to be depicted. Burkett and LaRoque, clearly, set up a situation where Philip is forced to adhere to his principles despite the danger of his circumstances--facing the White Dragon’s claws and flames. But how else are you going to get a character out of such a dangerous situation if he cannot defend himself? Obviously, he needs to be rescued!

Philip’s adherence to his principles, in my mind, would have stood out stronger if he had acted in a way that resolved the situation while remaining true to his personal beliefs; even if he had made a one-time compromise to engage the White Dragon to primarily keep himself safe while also defending Chinatown, I would have felt better about the situation. Burkett’s insistence on having him keep his oath feels stagnant instead of propelling the character forward, working as a convenient plot development rather than an engaging character moment. 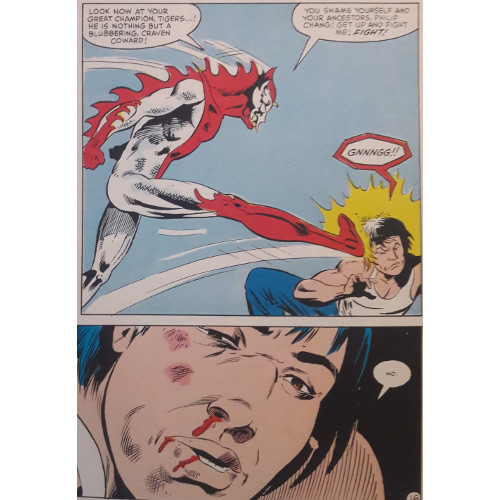 Fortunately, even if Philip’s story is a little messy, Burkett works to redeem herself through not one, but two well-done plot twists. I will keep mum on the details of the first twist, since it serves as a massive spoiler, but I will briefly mention that someone’s intentions aren’t as they seem, and the revelation of their duplicity near the story’s end alters your perspective of who they are in a clever way.

The second twist, I can expound upon. Earlier in the story, Moon Knight meets with a man who claims that White Dragon’s recent resurgence in Chinatown (after the villain’s imprisonment in an earlier Amazing Spider-Man issue) was engineered by someone with vast power. Moon Knight later deduces the Dragon’s mysterious benefactor is none other than the Kingpin, and while Wilson Fisk doesn’t appear in this issue, I found myself oddly interested in the twist. OF COURSE the biggest ganglord in New York has a hand in this! I mused. Instead of just assuming the White Dragon broke out of prison at some unknown point in time and started wreaking havoc in Chinatown, Burkett neatly explains where his new strength came from. The reveal may feel a tad random, but knowing the influence Kingpin has had through several Spider-Man issues up until now, I was able to accept the twist gracefully. It just sticks with how the character has been represented up until this point.

Spidey’s time in this issue as in other MTU tales, is split between himself and another hero, but I would argue that his role is comparable to Moon Knight's. He’s here to help his friend Philip, and he does end up fighting some of the Dragon’s goons, but he’s held back when Philp later confronts the Dragon. Spidey’s involvement, though limited in the area of fisticuffs, is actually integral to discovering the betrayal I mentioned earlier, as well as keeping a bomb from obliterating a crowd of people. The betrayal and bomb are nicely woven into the story, so it doesn’t feel like Burkett went “Huh, Spidey’s not doing anything, so I gotta give him some way to impact the plot” and wrote in the betrayal and bomb scenes to justify Spidey’s presence in the story. Overall, Moon Knight and Spidey are nicely balanced in this issue, both able to defend their appearances instead of coming off as random inclusions. 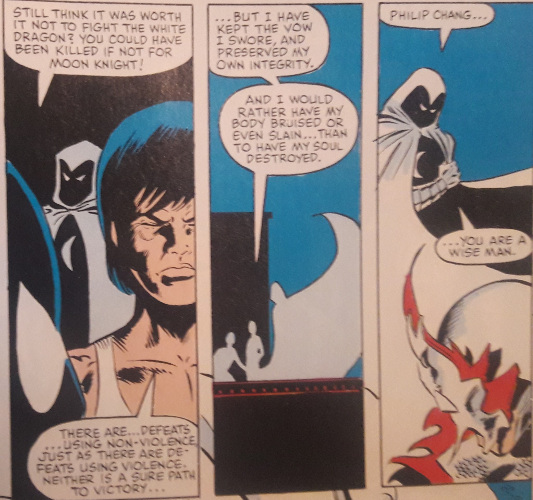 Burkett and LaRoque make an effort to tackle some interesting themes in this issue, asking questions about when violence is right and when it can be set aside for the sake of honor. In some cases, Burkett and LaRoque are clear that some forms of violence are completely unacceptable--the murder of the Tiger’s Claw’s leader, the White Dragon trying to kill Philip, and the bomb are all dishonorable and disheartening cases of murder against individuals. What becomes less clear is when certain forms of violence, such as self-defense, might be necessary. Is it enough to just swear off violence completely like Philip does, especially when you’re presented with a situation where you might need to raise a fist to keep yourself alive or unharmed? The comic never really answers this, nor does it present an alternate solution to making peace. So I might be able to agree with the creators that violence isn’t always the right answer to a problem, but unlike Philip, I’m not sure how many of us can expect Moon Knight to swing down and save the day when we’re in trouble.