Good and poor characterizations abound in this David Michelinie two-parter, creating an unbalanced but entertaining tale 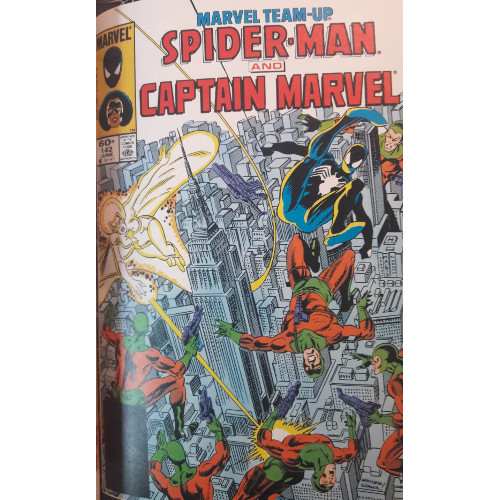 When we last looked at Spidey’s third “title,” Marvel Team-Up, we examined an issue that saw Spidey deal primarily with Daredevil and a few ruffians. Unlike his other two titles, Spidey’s involvement in MTU didn’t carry as much weight--stories didn’t seem to impact one another as deeply as Amazing Spider-Man or Peter Parker, the Spectacular Spider-Man issues did. As such, I have little to offer in the way of summary or necessarily exposition before we dive into this two-issue arc co-starring Captain Marvel and Starfox (who has nothing to do with the Nintendo character of the same name).

“But wait,” you interrupt, puzzled. “Isn’t Captain Marvel...y’know...no longer on this side of life?” Good question, intrepid reader, and may I applaud your memory. As we saw in my review of Marvel’s first ever graphic novel, Captain Mar-Vell of the Kree very clearly passed on...and has never been brought back in any significant way to overturn or retcon that passing. 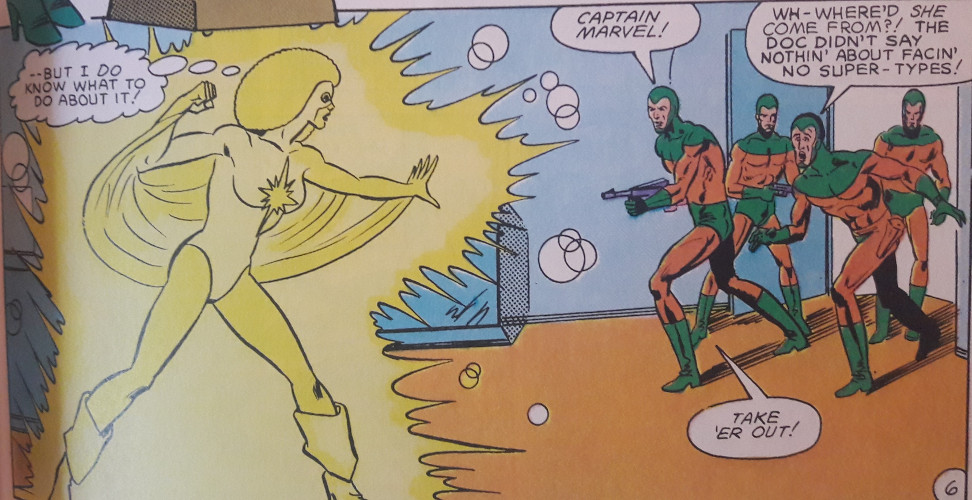 David Michelinie, the writer behind the brilliant Iron Man arc “Demon in a Bottle” and a man with a fairly significant ASM run of his own in the not-to-distant future from where we currently are, crafts this two-part story that feels decidedly distinct from Christopher Priest’s ASM #141. The key difference is this issue has little to do with Spidey’s costume. Some of the suit’s common traits, as we’ve already witnessed in other issues, appear here--making organic webbing, storing Peter’s equipment, responding to Peter’s thoughts--and the issue, naturally, reminds readers to buy the Marvel Superhero Secret Wars limited series that was being published at the time, but the story doesn't reference the suit significantly. If anything, a scientist comments on how the suit responds fluidly to Spidey’s mental commands, his tone approaching the edge of ominousness. But that may be dependent on how I read his words and not an indication from Michelinie that the scientist is actually taken aback by the costume’s abilities.

Michelinie’s characterization is what I ended up focusing on as I read these issues, primarily characters not named “Spider-Man.” Peter is, as usual, characteristically amusing and entertaining to read, but it’s the other heroes who join our Webbed Wonder, Captain Marvel and Starfox, as well as the story’s main antagonist, Doctor Paulson, upon whom I wish to center my focus.

Captain Marvel, at this time, was a woman named Monica Rambeau (viewers might remember her as the daughter of Carol Danvers’ best friend, Maria Rambeau, from the Captain Marvel movie), and from what I’ve read, she was dubbed “Captain Marvel” by the public after one of her first appearances. I’m also unaware of whether she aspired to live up to the Kree Captain’s legacy, but a comment she makes part way through the first issue about Starfox being friends with the original Captain Marvel gives off vibes that she at least recognizes the connection between herself and the deceased Mar-Vell. Part of me wishes Michelinie had focused on this, as it offers some incredible personal conflict: how does one live up to the legacy of a hero like Mar-Vell? Other comics have asked similar questions about "legacy" heroes who assume a mantle previously held by a different person--Bendis’ work with Miles Morales in Ultimate Comics Spider-Man hinged on that notion--but I would have loved to see Michelinie’s take. 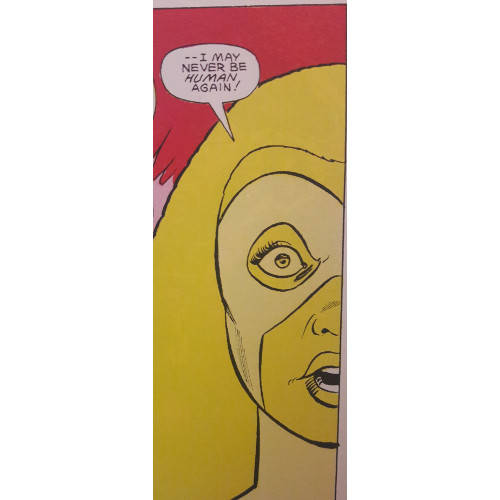 Instead, Monica’s “personal conflict” is more external. The villainous Doctor Paulson and his agents utilize a device which, as a side-effect, renders Captain Marvel stuck in an intangible state (come to think of it, something really similar happened to her in Secret Wars…), ending the first issue on whether Monica will ever be able revert to her human form again. Monica’s reaction is appropriate, artfully crafted by Greg LaRoque, but the condition ultimately takes her out of the action for the second issue, leaving Spidey to team with Starfox. Not that I’m complaining that Starfox isn’t a worthy ally to team with (well, I might be saying that…), and I’m also not complaining that Monica’s plight isn’t a worthy cause for our intrepid heroes to fight for. All I’m saying is that Michelinie could have used Captain Marvel more dynamically in these issues.

The second part turns towards fantasy, as the dimension Starfox and Spidey travel to has a “sword and sorcery” vibe to it, with warring tribes and magical totems. Michelinie tries to ease into the weirdly mythical aspects, but the tone of this issue shakes you as you head into it, as MTU #143 is so different than its predecessor. Mad scientists, men with rays guns, and a young woman imbued with otherworldly abilities are ditched for armed combat, rustic settlements, and Starfox’s Thor-like diction. 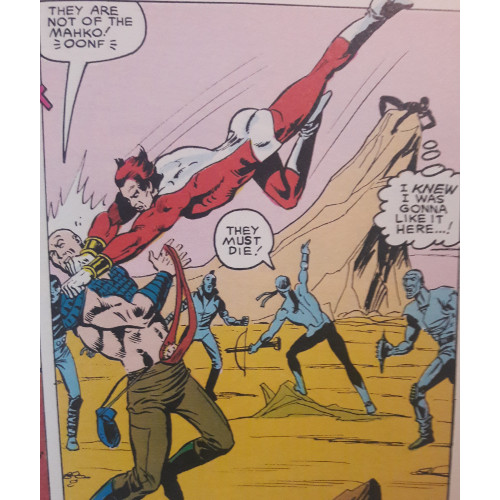 Unlike with Captain Marvel, Michelinie nails Starfox’s personality, and though I don't know much at all about the character, the little I’ve read points to him being a hopeless romantic and a bold warrior from the planet Titan. His headstrong fighting sense and suave charms are on point throughout the issue, and though I know his “hopeless romantic” side has gotten him in trouble in other stories, Michelinie doesn’t necessarily present him as a creep. Spidey has to remind him occasionally about their mission’s purpose, coaxing the Titan-born hero back into action, but I think this is less a knock against Starfox and more a reason to applaud Spidey. Focused and intentional, Spidey shows himself as the hero with the drive necessary to complete the mission and face whatever odds they need to in order to save Captain Marvel.

Finally, we have this issue’s villain, Doctor Paulson. A normal, human scientist, Doctor Paulson is convinced that overpopulation is a key global issue that needs to be rectified, and with the resources and men allotted to him, decides the best way to eliminate the problem is to eliminate people. He comes across as brilliant but absolutely misguided, not exactly another floundering madman but as an individual who sees what he believes to be an important problem and decides to take morally atrocious steps to fix it. 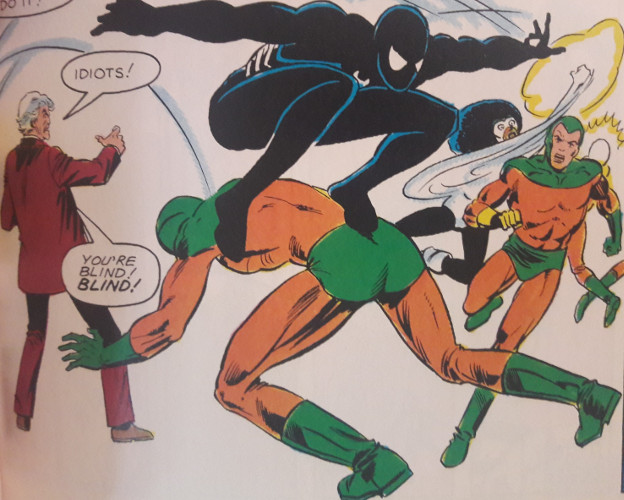 Michelinie crafts him as rather self-absorbed, with Paulson at one point pronouncing resignedly he will bear the burden of murdering the equivalent of 1/7 of today’s global population. He’s written in such a way that makes you think of him as someone who’s just shrugging their shoulders and going “Guess I’ll do it” as opposed to a villain who acts out of pure selfishness. Villains like Doctor Paulson, who believe themselves to be “burdened with glorious purpose” (as Tom Hiddleston’s Loki put it), are more terrifying to me than a super-powered Green Goblin who thinks nothing of tossing bombs around or throwing young blond women off of bridges. These types of criminals, supervillains, and despots believe themselves to be absolutely correct in their intentions, if not their actions, and believe they have the ability and right to correct the flaws they see, no matter the devastation they cause. That certainly hits home more than a random pumpkin bomb.

Much like Captain Marvel, sadly, Paulson’s usefulness to the story is used up by the end of the first issue, and he’s left jabbering in a corner while Spidey and Starfox correct an ages old war between interdimensional tribes in this story’s second installment. Though I understand Michelinie’s desire to, perhaps, craft two equally interesting and diverse storylines instead of your standard two-parter, I also think, by doing so, he does waste the potential of this tale’s first issue. Neither Doctor Paulson nor Captain Marvel add anything to the story’s second half, and as engaging as the character of Starfox is during the second issue, I think Michelinie could have placed him in a different role in the tale rather than “interdimensional traveler.” 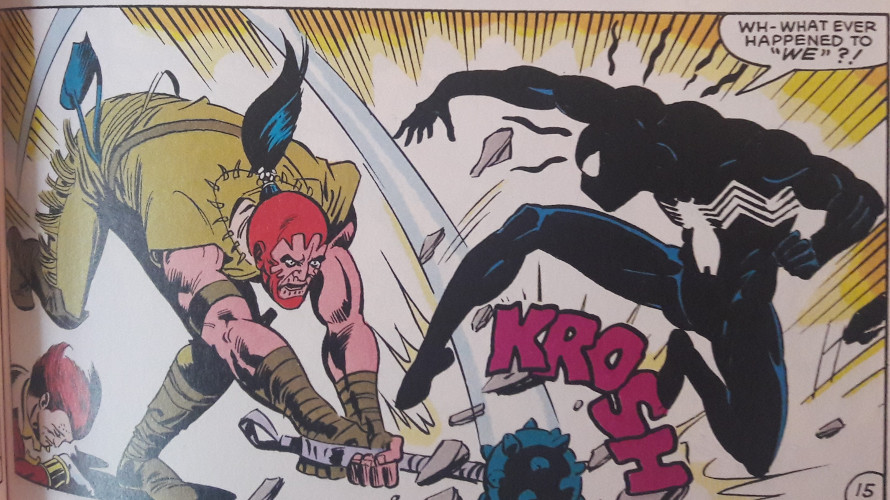 Good characters fill this storyline, which is often difficult to say about a comic, strewn as they can be with one-note villains and repetitive character arcs. I mean, how many times has Curt Connors transformed into the Lizard and back again? How many times has Sandman tried to crush Spidey with a massive mallet made out of sand? Kudos to Michelinie for playing with something and injecting entertaining characters into this plot, even if he fails to use them to their full potential by time this two-parter wraps up.