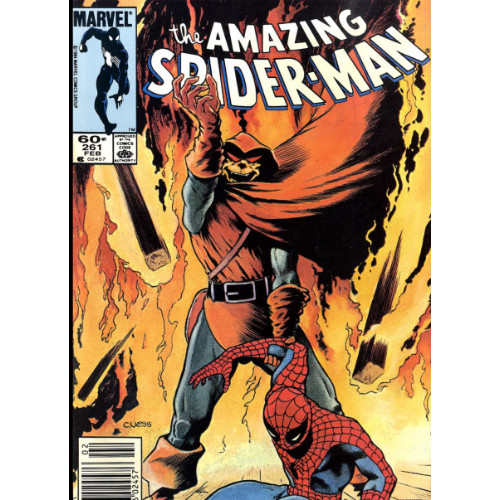 Tom DeFalco has been dealing with quite a bit during the last several issues of Amazing Spider-Man--we’ve seen him create a rough patch between Peter and Aunt May, untangle the mystery of the black alien costume, develop Mary Jane's backstory, and address a few of the Hobgoblin’s mysteries. The “Hobgoblin” angle comes back full-force in this two-issue story arc, and though the tale of the enigmatic supervillain is far from over, DeFalco at least adds what he can to the allure of the villain in these issues.

For now, we’ll set aside conflicts with kittens and Kingpins in favor of a story that I would like to say feels rather “traditional.”

“The Challenge of Hobgoblin” 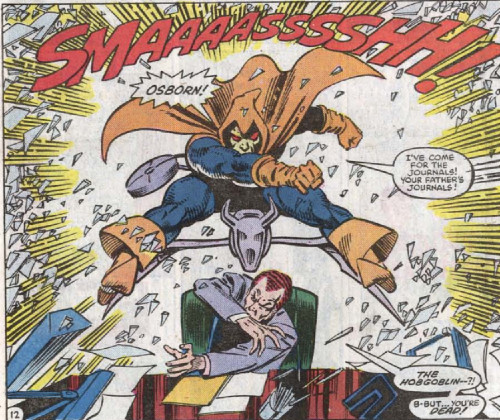 Since ASM #251, Spidey’s wondered whether his latest arch-foe, the orange-and-blue knockoff of a certain green-and-purple nemesis, is alive or dead. As it turns out, reports of the Hobgoblin’s demise have been greatly exaggerated as he comes careening through Harry Osborn’s window, demanding any information the young man may have on his father, Norman, the original Green Goblin Harry, too, served a stint as the pumpkin-wielding superfoe, though his tenure was drug induced and not nearly as devastating as his father’s reign of terror. At this stage, I don't think many people knew of Harry's episodes, so as far as Hobgoblin is concerned, Norman has been the one and only Green Goblin. At the time this issue was published, Norman was presumably dead. Thus, the stage is set for our two-parter.

The Spidey/Hobgoblin conflict takes up most of the space of these issues, allowing DeFalco to weave in some genuinely entertaining brawls, courtesy of Ron Frenz’s detailed pencils. Frenz does wonders on these issues, maintaining the same level of menace and mystique for the Hobgoblin that John Romita Jr. gave the villain in ASM #238, the Hobgoblin’s first appearance. The villain is crafty, heavily reliant on an arsenal of weapons, and wavers between appearing as a shadowed, Grim Reaper-esque madman and a highly dangerous goon in a Halloween costume. He may seem like a Green Goblin ripoff, and his shtick is certainly tethered to the Osborn legacy, but DeFalco and Frenz also make the villain distinct from the then-deceased Norman Osborn. 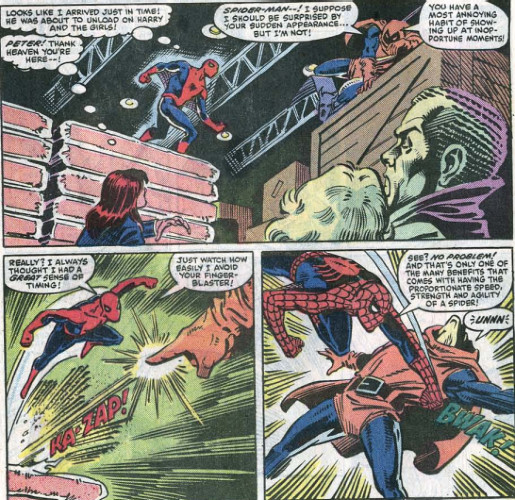 The Hobgoblin’s identity issue, still somewhat of a puzzler for me, is also played up in these issues. From recent background information that I’ve read, the entire “Who is the Hobgoblin?” plotline was a mess for Spidey writers and editors. The Hobgoblin’s creator, Roger Stern, had a completely different person in mind than DeFalco when the latter took over ASM, and DeFalco’s own plans were eventually disrupted by new Spidey editor Christopher Priest (then Jim Owsley).

Let me give a brief rundown on the individual suspects for the Hobgoblin, as put forth by each writer, in part to keep it straight for myself and to keep you on board.

As far as I know, the Foreigner concept was never really addressed, nor was the Richard Fisk idea (brief yet relevant SPOILER: Fisk was eventually revealed as the Rose, the masked gang lord DeFalco introduced in ASM #253), but the “Leeds as Hobgoblin” idea is vital, even important to this issue. DeFalco, still determined to have Fisk unmasked as the villain, weaves a couple of red herrings into this issue. In a handful of panels, Daily Bugle staff members quizzically question the odd disappearances of a few key employees--namely, Ned Leeds and staff photographer Lance Bannon. Especially with the benefit of hindsight, the nods to Ned and Lance’s supposed “disappearances” around the same time the Hobgoblin attacks Harry make sense; I’m not sure how many readers would have caught the nods, nor would have I were I not knowledgeable of the Hobgoblin fiasco. Nevertheless, kudos to DeFalco for at least weaving in potential herrings and developments, even if they were eventually waylaid.

The above summation, though perhaps a bit much, is nevertheless essential to understanding these two issues. DeFalco, very tightly, adds some more depth to the mystery of the Hobgoblin as he saw fit. The Hobgoblin in these issues has since been retconned to actually being Roderick Kingsley, who Roger Stern would reveal as the one, true Hobgoblin years later. In my mind, convoluted as the mystery surrounding the villain may have become, both in the comics and behind-the-scenes, I can’t help but tip my hat to DeFalco for handling the dilemma with aplomb. He moves the mystery forward, even if the resolution was intended to be different than Roger Stern’s original concept.

The one small area this doesn’t work is a panel where Hobgoblin refers to MJ as “Miss Watson,” surprising our red-headed heroine. He...knows my name! MJ thinks to herself, which is a fact that doesn’t make much sense, considering the circumstances. Though DeFalco wanted Richard Fisk as the Hobgoblin, he resorted to Ned Leeds serving as a patsy, a “body double” for the Hobgoblin at moments, to throw a red herring at the audience. Leeds knows who MJ is, but Fisk doesn’t as far as I understand...and according to what I’ve read, the Hobgoblin in these two issues is intended to be the real Hobgoblin, not a double. Eventually, the “real” Hobgoblin will be revealed to be Kingsley, as I stated, but even if the Hobgoblin in these issues is Kingsley and not actually Fisk, thus more in line with Stern’s intentions than DeFalco’s, the reference to MJ makes little sense. I could throw in the idea that Kingsley, a fashion mogul when not dressed in orange spandex, may be aware of MJ’s burgeoning modeling career and thus knows of her through similar social circles. But that’s lobbing in a far-fetched hypothesis, so why don’t we just stick with what we know?

This small issue aside, DeFalco’s conflict, in general, is handled wonderfully throughout the issues, with several smaller conflicts stemming naturally from problems that come before it. Liz Allen Osborn goes into premature labor as a result of Harry’s inability to save her and MJ from the Hobgoblin earlier, which stems from the Rose’s thugs kidnapping the women off the streets, which only happens because Harry and Peter are preoccupied with the Hobgoblin attacking Harry’s offices. Likewise, the conclusion of the events--Spidey rescuing the three and sacrificing stopping the Hobgoblin for good--flows naturally from preceding conflicts. Event C follows Event B, which only happened because of Event A. Circumstances don’t feel forced, and the whole story has a very nice pacing to it that allows transitions between scenes and events to feel carefree.

Mary Jane’s role in the story is also to be praised. Not only does she behave admirably in the face of danger, but her deeper connection with Peter, spurred on by her dramatic revelation from a few issues ago, gives her character a new sense of intrigue. No longer is she just Peter’s friend or a damsel in distress who ends up getting kidnapped. I mean, yeah, she ends up getting kidnapped in this arc, but DeFalco inserts a level of confidence in her towards Peter that we have yet to see. Seeing a character who knows Peter’s secret and continually loves and confides in him despite understanding his double-life is a highly refreshing avenue for the book to take, ramping MJ’s importance within Peter’s supporting cast. Suddenly, in MJ’s eyes, Spider-Man isn’t just another costumed do-gooder who, thank the stars, happened to swing by and rescue her and the Osborns from the big bad fashion mogul. He’s her friend--not just Peter, but Spidey as well--risking his neck to save theirs, and the way that MJ views Peter as a composite of both his mundane and superhuman identities feels utterly different from how most characters see him.

The “Aunt May vs. Peter squabbles” are put to the side for these issues, with the only reference made at the beginning of ASM #260, where a stubborn Aunt May continues to refuse to speak to Peter. This development was pretty interesting at the start--it did, after all, inject some life into the Aunt May/Peter relationship beyond the whole “Peter needs to keep his identity secret from Aunt May otherwise he’ll give her a fatal heart attack” issue the books had been referencing for decades at this point. Several issues later, with little in the way of actual development, the subplot is growing a tad stale. DeFalco, I think, is wise to not address it much here, even if I do find a minor scene where Aunt May remains resistant to speak to her nephew (just give it up already) somewhat irritating.

I would also be remiss to not mention the one other not-so-minor subplot entered here: the status of the alien costume. Since being forcibly removed from Spidey in ASM #258, both DeFalco and Milgrom have darkened the symbiote’s mood. It’s hateful, vengeful even, trying to trick Johnny Storm into freeing it and, in this story, unsuccessfully attempting to tap into Franklin Richards’ mind (and, to make a very long story short, I assume the reason it fails is because little Frankie’s an Omega level mutant capable of warping reality on a whim...meaning the symbiote is a little out of its league). These “mental powers” aren’t an aspect I recall the symbiote having--I believed it only communicated mentally with hosts it attached itself to--making the Franklin scene a little awkward. However, DeFalco makes up for it by redoing a scene that would also appear in a Fantastic Four issue, where a drone frees the symbiote from its imprisonment, thus ushering in a potential new plot for the alien costume to take part it.

Minor gripes aside, DeFalco and Frenz once again make a fairly entertaining story arc. Yes, the Hobgoblin saga is increasingly convoluted, even at this stage, and will only become more entangled on itself as time goes on, like some kind of wacky, looping kite string. DeFalco’s efforts with his characters, particularly MJ and the Hobgoblin, are done well in my opinion, bizarre as some of the circumstances may be. With DeFalco’s strong character work at the fore, we’re offered a story that feels like your typical Spider-Man adventure--the aliens are largely tucked away (for now), meaning our hero can get back to socking punks like the Hobgoblin instead of worrying about whether his costume is going to digest him at some point.