With the alien costume seemingly gone, Al Mlgrom wraps up another plotline in an issue that reads better that some of his past work 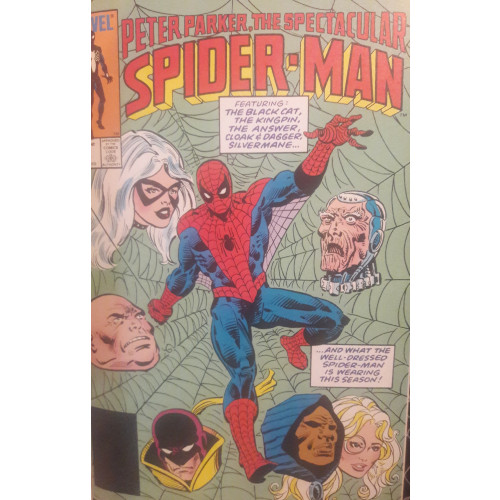 So...where the heck is Dagger?

You may recall the light knife-wielding woman’s plight from my review of Peter Parker, the Spectacular Spider-Man #94-95: hunted by not only the robotic Silvermane, but also by the Rose’s men and the Kingpin’s flunky the Answer, Dagger was in quite the predicament. Despite the best efforts of Spidey, Black Cat, and Dagger’s best buddy Cloak, the young woman was snatched by the Answer and delivered to his ganglord boss.

Much has happened since then. Spidey has gone toe-to-toe with the Puma and the Collector, battled the Black Abbott and Taskmaster beside Nomad, worried over his Aunt May, and been double-teamed by the one-two-punch reveals that MJ knows he’s Spider-Man and that his new, cool costume is actually an alien symbiote looking to permanently graft itself to his body! Yikes!

In all this, little has been said about the kidnapped Dagger, so it’s up to that master of all things temporal, Al Milgrom, to answer the question of just where our light-lashing lass has gotten to. 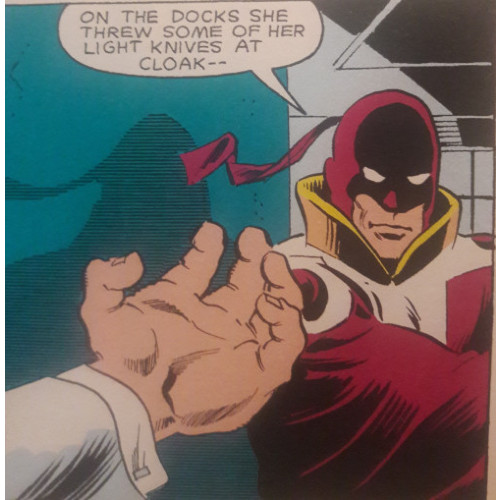 In ASM #258, Tom DeFalco used a small transitional phrase (“Sometime later…”) to indicate that time has passed between Part 1 and Part 2 of his story arc, allowing for stories such as Marvel Team-Up #146 and Peter Parker, the Spectacular Spider-Man Annual #4 to occur in the interim. Milgrom utilizes a similar tactic: opening with a “prologue” of sorts that begins soon after the end of PPSSM #95, Milgrom gives us a brief “A short time later…” which, if I’m not mistaken, serves the same purpose as DeFalco’s transition. Chronologically, then, we’re okay. Milgrom, who I’ve knocked for his previous timeline fracases, capably indicates his story begins after Peter has ditched the alien symbiote in ASM #258.

We might be safe “chronologically,” but “narratively” is an entirely different matter. I shouldn’t complain about this too much, as comics must be terribly tricky to handle when you have to consider in-universe timelines. I don’t have a problem believing that, in an unspecified space of time, Spidey fought the Puma in ASM #257, battled Taskmaster and Black Abbott in MTU #146, followed Aunt May in PPSSMA #4, and then dealt with his alien costume hijinks in ASM #258. I don’t even wrestle with believing all those events happened in that particular order. What confounds me, however, is the lack of reference to Dagger’s situation. Yes, I fully understand that different writers and artists are working on these books and have their schedules and deadlines to meet and most likely cannot confer or quibble over the particulars of each other’s plots. But considering that Milgrom makes ample reference to Spidey losing his alien costume--including an incredible splash panel showcasing our boy donning the classic red-and-blues--you’d think DeFalco could have returned the favor in one of the two ASM issues published between PPSSM #95 and #96. 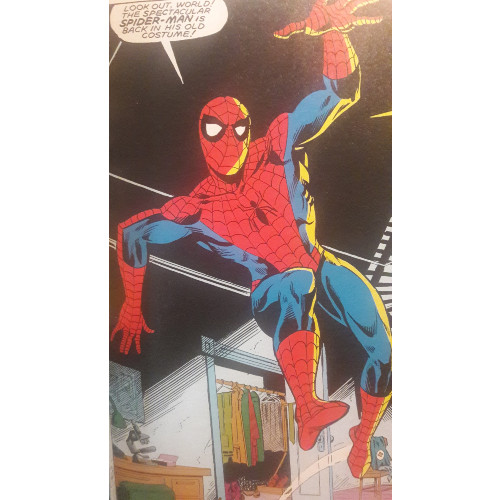 I guess that’s not so much a criticism of this issue as it is of other comics; Spidey makes a big, big deal about poor Dagger in this issue, talking to Black Cat in desperate terms about how they definitely have to find her. Naturally, none of this desperation is shown in any of the other non-Spectacular issues that I just mentioned, and while I get that those titles have their own arcs to follow, I struggle slightly with the narrative timing of everything. For all his faults in incorrectly lining some events up, Milgrom has done a pretty decent job at making PPSSM feel like a companion title to ASM instead of its own, random, unrelated strand of globby narrative, shunted off into the ether. So far, he’s done a bang up job reminding readers of the happenings of ASM, recapping events such as Spidey’s fight with Jack O’Lantern, Peter’s falling out with Aunt May, and in this issue, the black suit situation and even MJ’s big revelation. The blame, thus, lies more on the shoulders of writers like Tom DeFalco and Cary Burkett, who have not similarly indulged Milgrom. 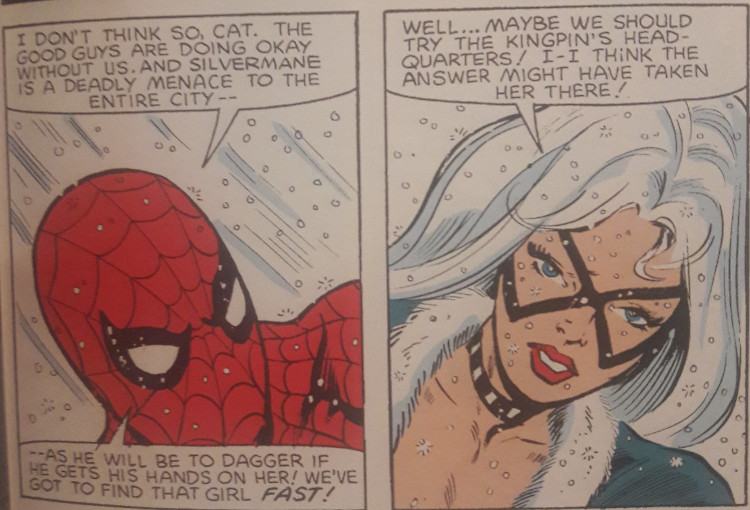 So a month and seven stories later, we’re finally back on the trail of Dagger. Milgrom writes an entertaining tale that brings several pieces from earlier stories together--Dagger’s kidnapping, Kingpin’s ailing wife, Silvermane’s rampage, the Answer’s involvement, and even Spidey and Black Cat’s relational problems. Milgrom juggles all of these deftly, and even if certain subplots rise to the fore over others, the various strands that Milgrom has worked into his prior stories all come together here. Certain plotlines are resolved for the moment--it shouldn’t be too much of a spoiler to suggest that Dagger is rescued by the combined forces of Spidey, Black Cat, and Cloak, nor am I going to shy away from saying that Silvermane’s “mindless zombie” phase is overturned and that, for one reason or another, this is the Answer’s final appearance in Marvel comics for close to nine years.

The Answer, wonderfully, plays a highly important role in the conflict. Even though he’s only appeared a handful of times so far, I’ve grown quite fond of Milgrom’s new villain. Much like Cary Burkett’s Black Abbott or Tom DeFalco’s Puma, the Answer is an enigmatic character with a lot of potential. Do I feel disappointed that Milgrom essentially removes him from the board for the majority of a decade? No, not really. Milgrom utilizes the character effectively, letting the Answer turn the tables late in the issue in a way that may seem abrupt but adheres to his abilities and purposes so far. Able to come up with any solution, the Answer solves a problem confounding our characters, maintaining his original shtick right up to the very end.

As a result, the Kingpin’s plan is thwarted, and even this is written fantastically by Milgrom. The big man isn’t killed or hauled off to jail; no, his defeat is more internal, a sinking feeling of failure that one cannot easily come back from. He has the chance to change his circumstances and loses it right at the very end. Even physically standing up to the robotic Silvermane (in one of the issue’s most impressive panels) cannot keep his plans from crumbling around him. A final curse towards Spidey and the Black Cat may be a tad overdramatic, but it’s important to note: Spidey is on Fisk’s bad side more than ever, and the Cat, who owed the Kingpin a debt, is also under his wrath.

Speaking of Felicia’s debt, Fisk at one point calls upon her to help him stop Spidey as a way to fulfill her obligation to him. I raised an eyebrow when I read this, because I recalled the Answer telling her that she could pay her debt to the Kingpin by assisting him in stealing Silvermane’s body from the morgue, which she did in PPSSM #93. Perhaps it wasn’t as done a deal as I remembered? Even if this a slight “Oops” on Milgrom’s part, the moment is poignant; Fisk has ratted out Felicia to Spidey, whose startled response is cut short in the ensuing battle. Perhaps Kingpin’s overall scheme is torn apart, and perhaps he swears future vengeance on his two foes, but he has successfully encouraged the doubts already wriggling in Spidey’s brain. 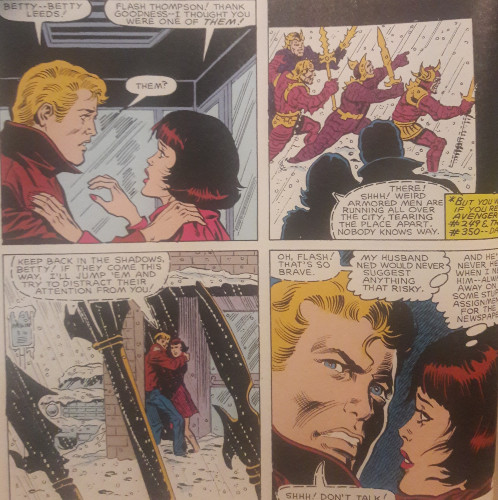 The one area where Milgrom’s narrative slightly flags is the introduction of a subplot between Flash Thompson and Betty Brant...sorry, Betty Leeds. Flash, who has been getting into mysteriously violent situations and bemoaning his relationship issues with his girlfriend Sha Shan, finds himself unexpectedly in the same dark doorway as Betty during a freak snowstorm caused by some events happening in a Thor story arc which I don’t care about. Thumbs-up for intertwined continuity, though! Even without the benefit of hindsight that would otherwise be gained by reading future stories, you can tell this Flash/Betty pairing is going somewhere. As Flash promises to protect Betty from some nearby armored roughians (again, related to the Thor plot), Betty muses how the young man is soooo much braver than her absentee husband. If you’ll remember from my last post, Leeds is currently running around as the Hobgoblin, serving as a brainwashed stooge for Roderick Kinglsey, the real criminal behind the ghoulish fright mask. Betty doesn’t know this. Betty thinks Ned is on assignment for the Daily Bugle. And thus begins a painfully awkward subplot between the two characters that, fortunately, we won’t need to read about for long. As it stands, the plot reads bizarrely and adds unnecessary tension and dimensions to characters that I don’t believe was needed.

Milgrom’s plot is certainly not derailed by the schedules and stories of other writers, nor by his own convoluted subplots, and he admirably does his part to bring readers up to speed with important recaps. I’ll admit that it is a little weird that the writer of a secondary title is the first one to place Spidey back in his old pajamas (beating DeFalco’s use of the old costume by a whole month), but Milgrom portrays the moment exceptionally well; as I read, I couldn’t help but feel thrilled as Spidey leapt into action, decked out in his original garb. Who cares if he shouts “Look out, world! The spectacular Spider-Man is back in his old costume!” and probably wakes up his fellow tenants and possibly alerts them to his secret identity? The moment is still glorious. If nothing else, seeing Peter in his classic outfit back in 1984 may have been worth the month-long wait between installments, perhaps a more enticing reason to drop your $.60 than the “Whatever happened to Dagger?” plotline.