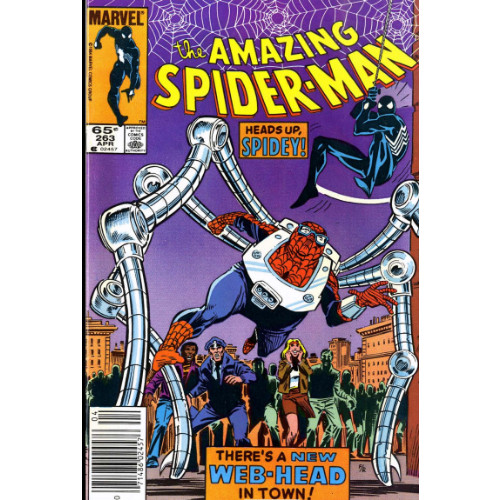 Pop culture is full of half-pint parasites always on the lookout for nerdy, geeky, awkward victims to harass and humiliate. Biff Tannen in Back to the Future. Johnny Lawrence in Karate Kid. And who could forget Flash Thompson, who’s hassled our Peter Parker on page and on screen for more than fifty years?

Bullies. You love to hate ‘em.

But the story always goes the same way, right? Our nerdy, geeky, awkward protagonist always turns the tables and gives the playground jerk the what-for. George McFly decks Biff; Danny LaRusso puts Johnny in a body bag; and Peter once KO’d Flash (see in an early Stan Lee/Steve Ditko issue for that story). Maybe it doesn’t always have to be that violent, but the point is, our stalwart hero rises above the oppression he often receives and stands up for himself.

With two pairs of metal appendages, Ollie Osnick may find standing a bit easier than some other folks. 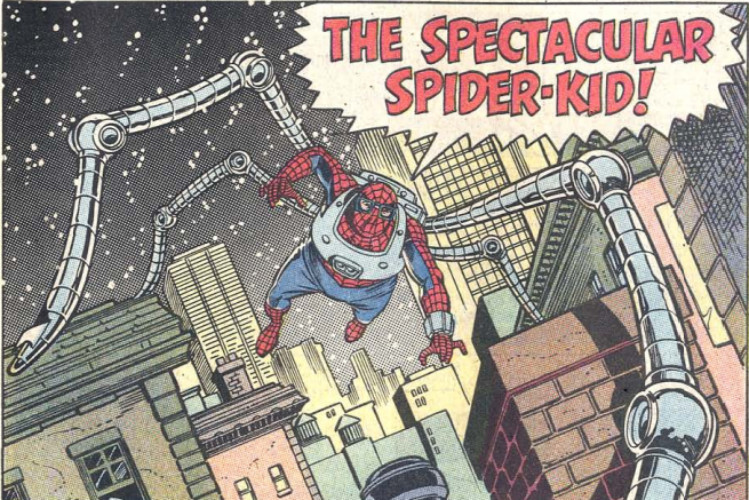 For this issue, we have to take, hopefully, one final dip into the continuity pool: remember all those times I ragged on Al Milgrom for messing with the timeline by having events in Peter Parker, the Spectacular Spider-Man not line up chronologically with situations in Amazing Spider-Man? This time around, we’re gonna take slight issue with Tom DeFalco, who returns to the title following Bob Layton’s standalone adventure in ASM #262, and his placement of ASM #263. DeFalco's infraction isn't a huge deal, but it's worth noting: though we examined Peter’s break-up with Felicia Hardy in March’s PPSSM #100, that event has yet to occur in ASM #263, despite DeFalco's issue being published the next month. In fact, DeFalco references events from PPSSM #99, but I’ll touch on that a little ways down the line.

For now, we switch to Ollie Osnick. From the start, it’s clear DeFalco wants you to empathize with the kid. Ollie’s smart, unpopular, and overweight, a classic nerdy type unable to naturally move beyond his limitations. Picked on by bullies, Ollie nevertheless finds an unlikely ally in Jane Lane (and in case you weren’t sure, Ollie calling her the “prettiest girl in school” confirms he has more than a passing yet innocent interest in the young woman). Inspired by a previous encounter with Spider-Man, wherein Ollie disguised himself as Dr. Octopus and broke into a toy store, earning the hero’s attention, Ollie’s decided the “criminal genius” route isn’t for him and has instead dedicated his life to heroism. Retrofitting his original “octopus tentacles,” Ollie prowls the night streets, inspired by a true hero. He’s “Spider-Kid,” folks, and he’s here to show the underbelly of New York who’s who. 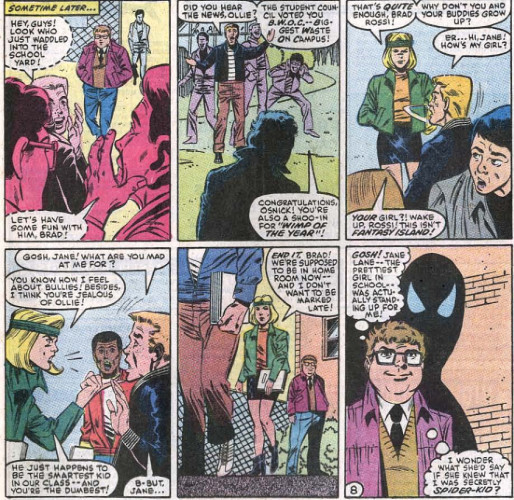 Conceptually, DeFalco puts a lot of heart into the kid. Again, he’s fairly transparent about his intentions--by the way he constructs Ollie’s personalities and social situation, you’re supposed to see the character as a kind of kindred spirit for both Peter Parker and Otto Octavius, the villainous Doc Ock. At moments, DeFalco may try a bit too hard--not only does poor Ollie have social and physical issues, but he seemingly lives with an overbearing mother and is naturally clumsy--stacking the deck against the kid so much that he’s run out of room to hold his cards. Still, see-through his scheme may be, DeFalco nevertheless entertainingly combines the “Peter” and “Otto” elements well. Jane Lane may be a painfully obvious counterpart to Mary Jane Watson (though her personality smacks more of Gwen Stacy), and Brad Rossi may be 1985’s version of Flash Thompson, but it’s still amusing to see DeFalco weave in the parallels.

Interestingly, from the get-go, Ollie’s efforts are directed towards heroism, unlike how a certain Wall-Crawler started off in the entertainment business and then switched to heroics once he lost his Uncle Ben. This way, DeFalco fashions a decidedly different take on the character and makes Ollie more akin to someone like Miles Morales than Peter Parker. Miles won’t debut for a couple of decades, but I mention him because of a strong connection between him and Ollie: Miles appeals to me because, unlike Peter, he didn’t necessarily have to decide to become a superhero out of guilt or in the name of a deceased loved one. Miles, inspired by Peter’s own sacrifice in the Ultimate Universe, chooses to try and live up to a name he honors. Ollie is trying to do the same thing, which I believe explains his decision to immediately become a crimefighter. 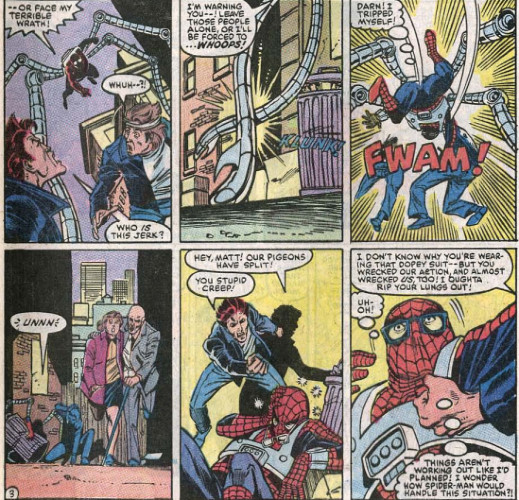 Alongside Ollie’s tale, DeFalco juggles a second narrative, one centered on the birth of Harry and Liz Osborn’s newborn son. Going into premature labor at the end of ASM #261 as Spidey rescued the Osborns from the Hobgoblin, Liz was rushed to the hospital. DeFalco ratchets up the medical tension, toying with the audience that, just perhaps, baby Osborn may not make it. DeFalco does show scenes of worry and drama, but he doesn’t over-emphasize the possible tragedies awaiting the couple. He outlines the complications and makes the problems clear, but he doesn’t go so far to make the tension unbearable or silly. We’re not treated to elongated scenes of concern from every single character involved, nor are we delivered paragraphs of complicated symptoms or procedures in an effort by DeFalco to look smart or clever.

DeFalco may deliver (no pun intended) the hospital scenes cleanly, but his writing can, occasionally, feel too over-the-top and somewhat painful in other instances. Unfortunately, he feels the need to consistently remind us of Ollie’s weight issues, and though he does so for the sake of sympathy instead of humor (in the issue’s very first page, Ollie declares himself a “hero to the fat and helpless”), his aspirations are obscured by his wording. Nowhere does DeFalco make you feel like he’s poking fun at Ollie’s impediments or situations, but he can simultaneously and occasionally bludgeon your senses with heavy-handed obviousness. We get it. We understand Ollie’s condition, we understand why he wants to be a hero. I’m not really offended by the language, but even I can understand when something unmistakable need not be stated so translucently.

Early on in the issue, we’re also given a scene between Black Cat and Spidey that, comparable to DeFalco’s use of the character in ASM #256 (the issue where Spidey first fought Puma), paints Felicia in quite a different light than Milgrom presents her. ASM #263 picks up pretty much as PPSSM #99 ends, where the couple had just walked away after failing to break into the Kingpin’s headquarters. At this point, Milgrom is heavily stressing the death of Peter and Felicia’s relationship, which was wholly annulled in PPSSM #100. But DeFalco’s take shows a possibility of survival, with Cat suggesting the two hang out more and simply growing frustrated with Peter after another bout of “Why are you keeping secrets from me?” questions from the Wall-Crawler. You get the sense that tension exists but not the near dissolution of an entire relationship.

Similarly, a scene later on, where Spidey dons the black costume he received from Felicia in PPSSM #99, also hints at DeFalco’s misunderstanding. In PPSSM #99, Spidey, appropriately, reacted with horror at the sight of the costume, Milgrom using the scene to show how much Felicia doesn’t “get” Peter. Per Milgrom’s dialogue, Spidey can’t even bring himself to even think about wearing the costume. Considering Felicia offers the costume at her own apartment and, in this issue, Peter puts it on after removing it from his own closet, this means that Peter chose to bring the outfit back with him to his place. Why? I have no clue. Sure, it looks spiffy and cool and serves as somewhat of a replacement for the alien suit, and DeFalco does have him use it reluctantly only after realizing he’d left his usual costume soaking in the wash too long (typical Spidey). I suppose it makes sense that, without a red-and-blue backup, Spidey would turn to the only spare costume left--though I wonder if he kept that hand-me-down FF outfit from ASM #258. Regardless of whether Spidey used the costume out of necessity or not, DeFalco’s inclusion of the black knit suit still points to a lack of understanding of Felicia on his part.

Momentarily melodramatic, Ollie’s story is nevertheless entertaining, in part because of its young protagonist and additionally due to the similarities between his tale and Peter Parker and Otto Octavius’. Ollie is, sadly, not a character who will make many more appearances in the Marvel Comics Universe--after forming a “team” of misfit do-gooders a few issues from now, he’ll make about only one significant appearance in a story we’ll examine down the line. The kid’s got promise, to be sure, but DeFalco does seem interested in using him for this singular issue. This isn’t like DeFalco’s introduction of the Puma, whom the writer seems to be grooming for future plots. Still, DeFalco’s handling of Ollie is preferred to other, clunkier segments of the issue where DeFalco utilizes a character he doesn’t seem to comprehend as completely.