As Milgrom builds towards issue 100, he follows a shaky path in a rather unbalanced penultimate issue 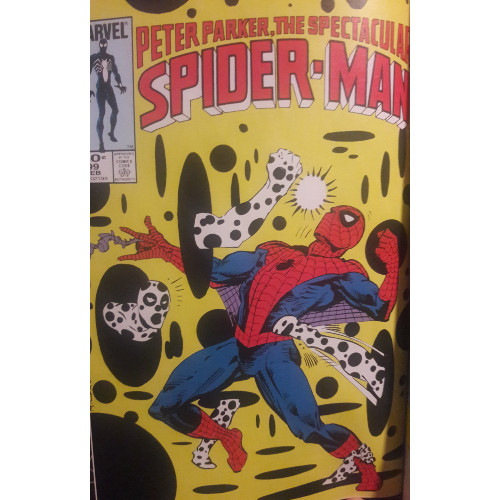 Al Milgrom is in full “ramping up” mode as we head into this last double-digit issue of Peter Parker, the Spectacular Spider-Man. You might be familiar with the drill by now: Spidey and Black Cat, steadily falling out but remaining connected via gossamer strands of affection. The Kingpin, roiling with rage as he puts the final touches on a plan he’s supposedly plotted for months. The alien symbiote, formerly Spidey’s newfangled outfit, seeking to bond totally with the Wall-Crawler before being forced off him and temporarily imprisoned in the Baxter Building. Flash Thompson and Betty Leeds, engaging in a friendship with suspicious hints at borderline attraction, despite Flash’s relationship with girlfriend Sha Shan and Betty’s marriage to Daily Bugle reporter Ned Leeds.

Needless to say, Milgrom fills his issues to overflowing with material. Whether it works or not can, sometimes, be an altogether separate matter, but as he gears up for that coveted 100th issue, he’s making certain plotlines important and building towards what may be a foundation-shattering story.

“Spider on the Spot” 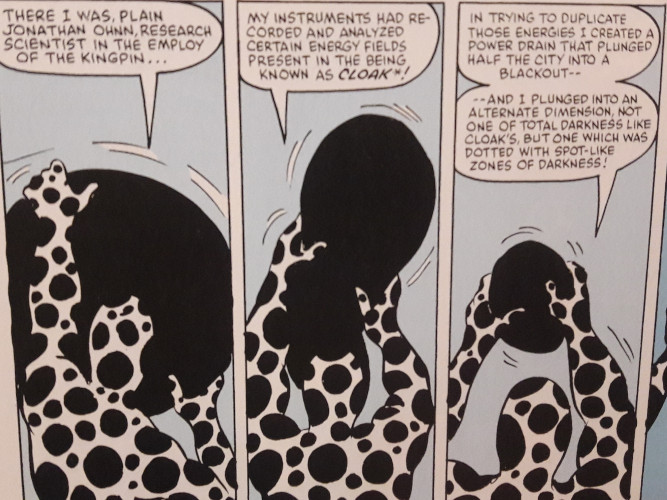 Similar to PPSSM #97 and #98, Milgrom hands off illustrative duties and focuses solely on writing responsibilities. Herb Trimpe’s art, similar to the work of other illustrators of the time, doesn’t “wow” and at moments feels indistinguishable from the art Milgrom has already delivered on the title in previous issues. If anything, there’s a certain polish to Trimpe’s art that I recognize fondly, only because I recently read his work on What If-? #2, an issue where his style stood out to me throughout the entire storyline. Other than this, his art isn't anything special.

“Indistinguishable” is an applicable adjective to insert here, considering it aptly describes the tone of the entire issue. PPSSM #99 feels similar to PPSSM #98, and though differences are scattered throughout both issues, PPSSM #99 carries a kind of literary deja vu, if you will. Plotlines are expanded, but they focus on the exact same characters and similar situations that PPSSM #98 focused on.

Let’s discuss a few of those plots and see which ones progress (if at all).

First, the Spidey/Black Cat plotline. Milgrom’s most significant contribution to the “Alien Costume Saga,” if not the title as a whole, the relationship between our young couple has been through a myriad of tribulations these past several issues. Black Cat’s consistent dishonesty, Spidey’s (rightful) insistence on being treated like a human...discord comes and goes like an unwanted guest. Have you ever known someone who you’d like to give a piece of your mind but always bow out at any opportunity because, as frustrated as you are, you’d rather not hurt them or see them react negatively? That’s the atmosphere Milgrom creates between the Cat and the Spider, one which creeps towards the edge of a daunting precipice and manages to teeter perilously on a hunk of land the size of a thimble without toppling over the edge. It’s a Russian roulette of duplicity, unspoken worries, and some corny characterization.

“Progression” is small here but significant. We’ve already had one or two instances where Felicia’s “bad luck” powers have seemingly put Spidey in harm’s way, and Milgrom doubles down on the idea in this issue. These moments, as well as conversations Spidey and Black Cat, really don’t move the relationship in any significant direction. It’s more of the same. But Milgrom puts in two pieces that I think highlight the disparity between the characters wonderfully without either having to say a thing.

Our first moment occurs early on in the issue where Felicia reveals a present she has lovingly sewn for her boyfriend: a new Spidey costume, made from black cloth. Spidey flips at this, mistaking the costume for the symbiote and, when Felicia explains it’s merely fabric, tells her why he can’t bring himself to wear it. He doesn’t necessarily chide her for her action--in fact, he understands her intentions behind sewing the costume are kind--but Milgrom’s point is clear: much as she loves Spidey, Felicia doesn’t understand him well. Though a kind gesture, Cat’s handiwork is an example of carelessness on her part.

The next instance occurs at the very end of the issue. After an attempt to break into the Kingpin’s compound is rebuffed, the heroes decide together to stage a second attack later on. Interestingly, following this agreement, Milgrom cuts to their individual thoughts, with both Spidey and Cat already planning assaults independent of one another (see above image). Contained to a single panel, this moment nevertheless offers insight into the quickly depleting trust the two have in one another. The castle is crumbling.

Milgrom’s second plotline focuses on the Betty/Flash romance. I have already discussed this at length, as I have previously mentioned, so I will forego describing my distaste. For all the emotionally charged conflict and tension that I assume Milgrom wishes to add to the story arc, nothing really happens between the two in this issue. As in other issues, Betty describes her friendship with Flash as purely platonic and, as in other issues, Peter internally questions her choices. Been here, done that. A counterargument I’d like to make is that, over in ASM, Tom DeFalco is purposefully stringing readers along with a “Ned Leeds is the Hobgoblin” red herring (or, well, I guess it’s not a huge red herring because Ned kinda sorta ends up being the Hobgoblin in actuality, but I digress), and as long as the Hobgoblin is making trouble for Spidey, poor Ned won’t be around to confront the philandering Flash. Thus, how can Milgrom propel the story forward if Ned can't confront Peter's former bully? I can’t say for certain this is the case, but if Milgrom’s plans have been momentarily stymied, the narrative slog this particular subplot has entered isn’t necessarily his fault. But since that’s only a hypothesis, one could also argue Milgrom is trying to pump as much material as he can out of a rather regrettable subplot that, for a handful of issues at least, has gone nowhere.

Milgrom also gets some mileage out of the Johnathan Ohn plot, introduced in issue #97. As we saw in my review of PPSSM #98, Ohn was transformed into a portal-tossing villain calling himself the Spot. Our zebra-colored-but-cheetah-dotted foe debuts in action in this issue, confronting both Spidey and Cat and successfully keeping them away from the Kingpin’s headquarters. Treated a bit like a joke--Spidey, at one point, doubles over in laughter when the Spot mentions his name--the Spot ends up being surprisingly formidable. His powerset makes for entertaining panels from a visual standpoint and, despite his lack of musculature, he deftly handles his portals, allowing him to fight the two heroes from a neat vantage point. He’s a different type of villain, and though I may more so enjoy Milgrom’s other evil contribution to the title, the Kingpin’s former assassin the Answer, the Spot isn’t a complete joke here, unlike his depiction in future appearances. 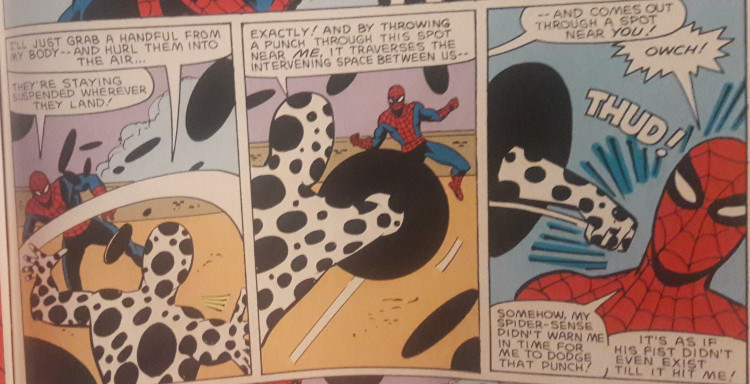 In addition to juggling these shenanigans, Milgrom places a capper on a subplot I hadn’t even recognized until now: Robbie Roberton’s ascension to the position of Daily Bugle’s Editor-in-Chief. For several PPSSM issues, Robbie had been particularly hard on Peter’s photographic skills, transforming (or perhaps even warping?) into a J. Jonah Jameson-esque character. The parallels are certainly present between Robbie and JJJ and, undoubtedly, feel laid out intentionally. Interestingly, as this issue shows, Robbie is not the same kind of man as Jameson: he apologizes to Peter about halfway through the issue, regretting the pushy way he treated the young man in some past stories. This scene is fascinating and stands out from the rest of the comic, as it cements the kind of person Robbie is and highlights a key difference between him and Jameson. Jameson, in his mind, is never wrong. Anything bad that happens is always the fault of another person, Spidey in particular. Robbie, as evidenced by his apology, recognizes his own culpability in certain matters and takes responsibility for actions deemed thoughtless.

As in other issues, Milgrom is building. He’s got a goal in mind, and while we have yet to analyze whether he reaches that goal successfully (more on that in our upcoming examination of PPSSM #100), the waters he navigates are choppy. You get the sense that he has the end goal in mind--a dramatic change in Peter and Felicia’s relationship, a confrontation with the Kingpin, a resolution of the Flash/Betty subplot--but Milgrom isn't as decisive about how he reaches that point. As a result, this issue can occasionally feel repetitive. Interesting ideas are sewn in, as evidenced by the effective use of the Spot and the brief moments where Milgrom really showcases how Black Cat and Spidey’s relationship is struggling, but some plots feel a little slow. The Flash/Betty subplot specifically feels bogged down for who-knows-what reason (again, it could be DeFalco’s use of Ned?), and it will end up being a story we will not be able to finish. For the purposes of this blog, the subplot serves as a mightily mediocre attempt at injecting some romantic tension in a title already spilling over with tension between lovebirds. If you haven’t been brought to tears by Wilson Fisk’s devotion to his wife Vanessa (still a better love story than Twilight!) or felt your stomach drop on the Black Cat/Spider-Man (Spider-Cat? Cat-Spider?) rollercoaster, I doubt you’ll be emotionally rocked by the “we’re just friends but not really” so-called “platonic” relationship between Peter Parker’s first crush and his high school bully.