Al Milgrom's latest issue is a step backward for the writer, an unbalanced menagerie of events and faces 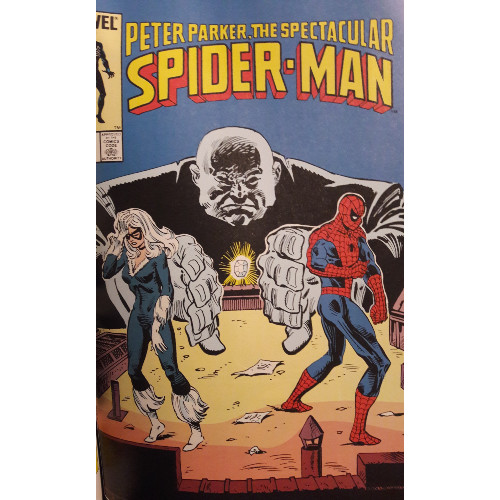 So starts a brand-new, single issue tale courtesy of Al Milgrom and Herb Trimpe, momentarily replacing Milgrom on penciling duties for Peter Parker, the Spectacular Spider-Man. Our boy Peter has reached a tipping point in his relationship with the former cat burglar and decides, once and for all, to have a very serious discussion regarding their relationship and the potentially dangerous flaws that he perceives. It’s a problem the two have bandied about and skirted around for the past several issues...will this be the moment where they make up for good or let the entire thing unravel? 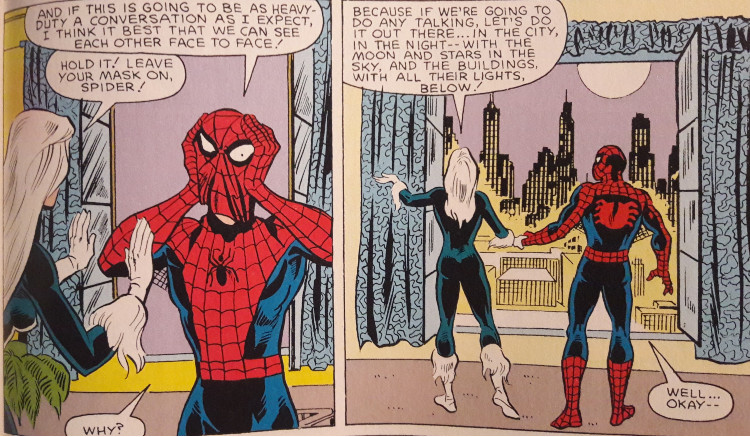 For all his little goofs and gaffs regarding the timeline, Milgrom’s characters have, generally, been consistent. Peter’s been growing more and more uncomfortable with his current dealings with Felicia, and Felicia has been continually evasive and closed off towards her spider-powered boyfriend. Even if the trite “I don’t want to talk about this” responses from Felicia whenever Peter brings up the subject of their relationship have grown a little stale over the preceding issues, her cold shoulder treatment of Spidey is somewhat understandable; Spidey, for his part, has been reasonably upset with Felicia’s reactions to his pleas, wishing she would see him as an entire person and not just the mask he wears.

This consistent characterization in previous issues is what makes the opening of PPSSM #98 a tad confusing, as Felicia actually agrees with Spidey when he brings up the topic of having a serious discussion. “You’re right, we do have to talk,” she says as Spidey swings in through her apartment window. “We left too many things unsaid the other night.” This statement, I infer, is a reference to PPSSM #96, wherein a short conversation between the two was interrupted by the Cat’s insistence that they rescue the then-captured Dagger. Spidey even remarks that, due to the interruption, their conversation wasn’t over...so I imagine this is why Felicia mentions the “unsaid” topics at the start of PPSSM #98. 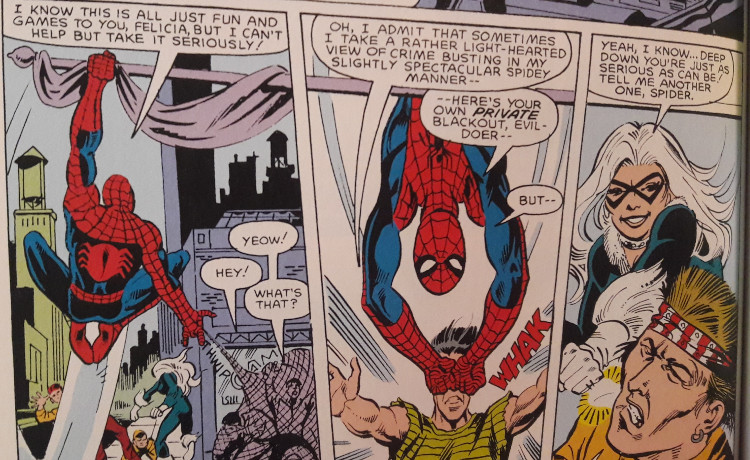 Awkwardly, however, Milgrom really gives no explanation as to why Felicia suddenly wishes to talk to Peter about this stuff. Between the interrupted conversation and their discussion now, Milgrom hasn’t had Felicia display much in the way of what we could call a “change of heart.” Throughout several previous issues, Milgrom has painted Felicia as a very torn woman--she’s split between the guilt of lying to the man she professes to love and the supposed necessity of continually keeping secrets from him. Now that Spidey has become aware of these secrets--which is done well by Milgrom, as a Spider-Man who’d blindly believe Black Cat despite her repeated duplicitousness would look maddeningly foolish--it seems sensible to have Felicia realize she can no longer pull the wool (fur?) over his eyes. The frustration, however, comes from the fact that this is only insinuation on my part and not a stated character change from Milgrom. Nowhere is any real “change of heart” outlined for the character.

Worse, once a blackout interrupts their conversation (more on that in a minute), Felicia asks Spidey, “does this mean we don’t have to have that heart to heart?” It’s not sarcastic, it’s not said jokingly...she means it. The shift here is also a little weird, indicating that perhaps any change on her part is not what Milgrom intended. I don’t think Milgrom, perhaps even from the start of his involvement in the “Alien Costume Saga,” had much desire to keep Peter and Felicia together as a couple. He also throws in the highly infuriating “I only love Spider-Man, not Peter Parker” logic that Felicia has utilized at least once already in one of our previous stories. Other than a conversation a few issues ago, this “I hate Peter Parker” vibe from Felicia really has not dominated the discord between our superpowered couple. Milgrom seems to just want to pull that particular rabbit out of its hat and dangle it in front of Peter’s face to remind us of that time Peter awkwardly unmasked in front of the Black Cat.

The aforementioned blackout doesn’t play much of a role in the story--it causes a somewhat lively game of cops-and-robbers between Spidey, Cat, and a gang of looters taking advantage of New York’s sudden plunge into darkness--but its inception is important to note. In PPSSM #97, Milgrom introduced a seemingly unassuming scientist on the Kingpin’s payroll. This issue, Doctor Johnathon Ohn becomes an integral part of our story as he creates a wormhole between our world and a twisted reality similar to the darkness sealed within the cape of the hopefully-familiar-to-us-by-now vigilante Cloak. Stepping into the wormhole, Doctor Ohn reemerges looking very different and very 101 Dalmation-ish. A human Spot. 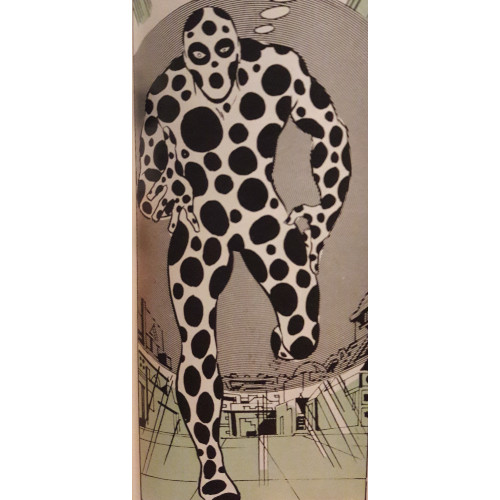 As supervillain origin stories go, Doctor Ohn’s transformation from meek nerd to portal-throwing goon isn’t the most fascinating. He’s given little characterization beyond a stoolie seeking to curry favor with the boss prior to his transformation, and Milgrom only hints at perhaps a newfound hunger to try his new powers after Ohn becomes the Spot. I will give Milgrom a thumbs-up for how Spot’s origin story hinges on Cloak’s power set, therefore tethering Doctor Ohn’s transformation to a previous story we examined. Milgrom organically takes a piece from a prior story and inserts it here, giving Ohn both motivation and clever circumstances surrounding his cocoon-less metamorphosis. The villain will truly debut an issue from now, so our spotted fiend simply waits in the wings for his moment to strike. Will it be worth it? Only issue #99 can tell.

Two other small subplots become entangled in Milgrom’s overall narrative: the ongoing Betty/Flash romance and the whereabouts of the alien costume. I will not spend much time on the whole Betty/Flash plot, as I’ve shoveled dirt on it already in two other posts, and will merely reiterate my distaste for the whole affair (in more than one sense of the word, I suppose); “Here’s to good friends,” Flash Thompson toasts their developing union, but the way Milgrom words Flash’s dialogue throughout the scene offers hints of discomfort...and not from Flash. Creepy? Very much so, but at least Milgrom has the sense to let us know he’s simply injecting this awkward subplot for the sake of tension amongst Spidey’s supporting cast and not because he thinks this is a really cool idea with great narrative merit. 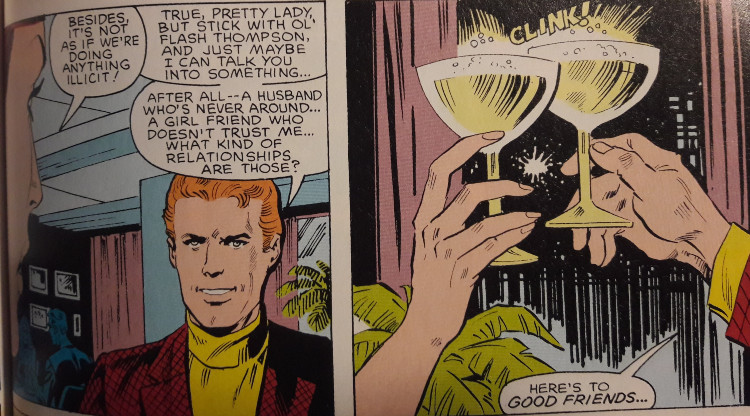 As we witnessed in my examination of ASM #260-261, the symbiote was freed and loosed upon the city. Milgrom pens the next chapter of its escape and, similarly to DeFalco, notes how it's seeking out its former host...the Spectacular Spider-Man! Little is done for the symbiote to add to what DeFalco has already put in place, though I suppose this could be intentional. For fans reading either mag and not both, I guess this just keeps them up-to-date in regards to the symbiote’s actions without moving too far along with whatever plot our writers are cooking up for it. For anyone unfamiliar with ASM at this point, they'll hopefully enjoy Milgrom’s nod to larger events, encouraged that the symbiote is beginning to stand on its own as a presence, if not a character, and a potential threat to our hero when not even trying to bond to Spidey.

PPSSM #98 is a bit of an unsteady issue: characterization becomes somewhat awkward for several key characters. Black Cat, Flash, and Betty are certainly not portrayed in the most dazzling of lights, and our latest supervillain, the hokey Spot, is introduced with some nonchalance. Milgrom clearly wants to use the character in some fashion, and I’ll admit, “guy with portals all over his body” is certainly an engaging concept for a character; and, like I previously stated, Spot’s origin is directly connected to the events of the previous issue, so A-Plus for making certain that Doctor Ohn’s alteration isn’t just thrown in out of the blue (or would that be “out of the black-and-white”?). Nevertheless, the character doesn’t really have much going for him in the “deep narrative” department--“scientist gets powers from a laboratory accident and decides to use them for selfish gain” is a comic book cliche even at this stage in comics history--nor do others, in fact. Does the issue propel the Black Cat/Spidey conflict forward? Yes. Milgrom implicitly makes it known that this relationship isn’t going anywhere great, and even if getting to the decline is a bit of a slog, he makes our intrepid Web-Swinger fully cognizant of the situation he’s in. Spidey may keep getting distracted, but he’s no dummy. In fact, he might be the one character not wholly getting their chords yanked by the ventriloquist that is "awkward characterization."