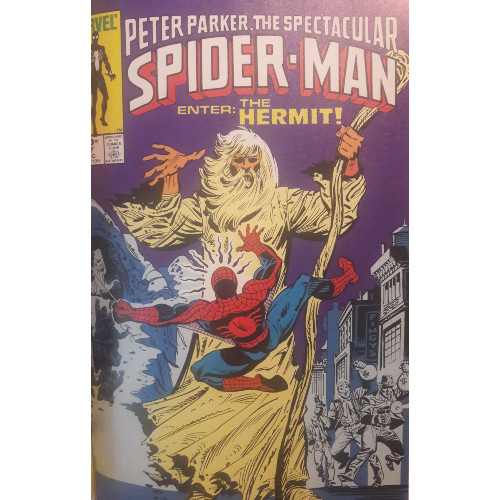 After wrapping up his three-part epic starring Cloak and Dagger, Silvermane, and the Answer, Al Milgrom moves into a few standalone issues before we hit the coveted 100 issue benchmark for Peter Parker, the Spectacular Spider-Man. I couldn’t recall much of PPSSM #97 before I read it recently, which was bizarre as it had only been about half-a-year since I read it initially, so I entered the issue with the idea that this wasn’t going to be a highly entertaining or memorable story.

I can’t say in good conscience that Al Milgrom proved me wrong, but we’ll discuss that when the time comes. I can say, fortunately, that I lean more in favor of this issue after a second perusal than after diving into it for the first time.

Admittedly, the main narrative of PPSSM #97 does feel like filler. Milgrom has just finished a somewhat longer story that brought several threads to a neatly tied end--the fate of the Answer, the zombification of Silvermane, Kingpin’s reliance on Felicia. Small threads woven into previous stories were concluded nearly seamlessly, though larger narratives continue to unspool (such as Spidey and Black Cat’s shaky relationship) and will become a large focus on the next few issues Milgrom produces. He has a somewhat bigger arc in mind that we will see finished by time issue #100 rolls around, so I suppose he’s allowed a bit of a break in giving that particular plotline some room to breathe.

Part of what makes this issue’s primary narrative somewhat lacking is how much of it is dedicated to exposition and summary, necessary and otherwise. Spidey himself spends a good two pages narrating the events of previous tales, including ASM #258 and the ongoing arc through PPSSM #94-96. Essential as such a summation may be for new readers, fans not following ASM, or anyone who’d forgotten the events of last month’s story, Milgrom use of it bogs down the pacing a bit. DeFalco, to his credit, has managed to weave in some well-written exposition while moving his story along; part of this has been via Ron Frenz’s ability to sneakily place images in the background, like a ghost-like Black Cat as Spidey ponders his relationship with her. Milgrom’s methods are more direct and, as a result, more distracting, swapping in chunks of dialogue alongside whole panels recreated from prior tales. Again, part of this is understandable--if you hadn’t yet read the issue where Spidey loses his alien costume, wouldn’t the image of Mr. Fantastic repelling the suit from our hero with a sonic cannon hook you and make you want to read that particular issue? This may be so, and as decent a marketing tactic as it might be, it’s also off-putting when considering Milgrom’s central narrative. 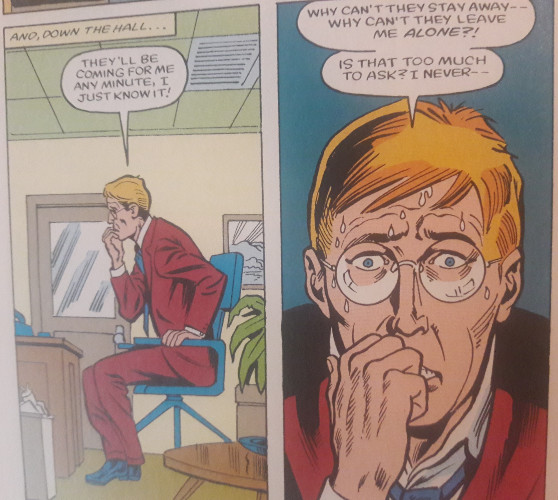 Elsewhere, MIlgrom also spends a lot of time crafting backstory for a new character, Timothy Quail. Tim’s an ad man, working for an agency where his abilities at crafting engaging material has earned him a lot of fame. Milgrom fleshes out Timothy’s entire history, solidifying the young man as an intellectual prodigy who’s always been an amazing problem solver. Timothy’s introduction, though a tad lengthy for a 22-page comic book, is more necessary than the earlier plot summations, and even if his history is driven by lengthy exposition, it’s at least new material rather than Milgrom rehashing tales of old (okay, not that old). Timothy is also developed decently in those few pages, crafted as a man who understands his proficencies and, interestingly enough, fears them. Milgrom creates a man who isn’t driven by desire for fame, gold, or love...in all honesty, he just wants people to leave him alone!

Timothy is a bit of a curveball, actually, and one tossed gently enough by Milgrom for you to enjoy him briefly. Milgrom doesn’t throw this character at you and demand you understand him, sympathize with him, wish you could help through his issues, etc. Timothy doesn’t rail against an unjust world but approaches it cautiously. Still, Timothy’s a one-off character, and while it’s safe to say he’s alive by the end of the issue, the guy hasn’t made a single appearance since PPSSM #97. He’s presented in an interesting fashion and used as well as he could be for a single issue, but given his lack of weight throughout the rest of comics history, the tale does come across as too brief to fully understand or appreciate the character, as much as you may be driven to sympathize with him. 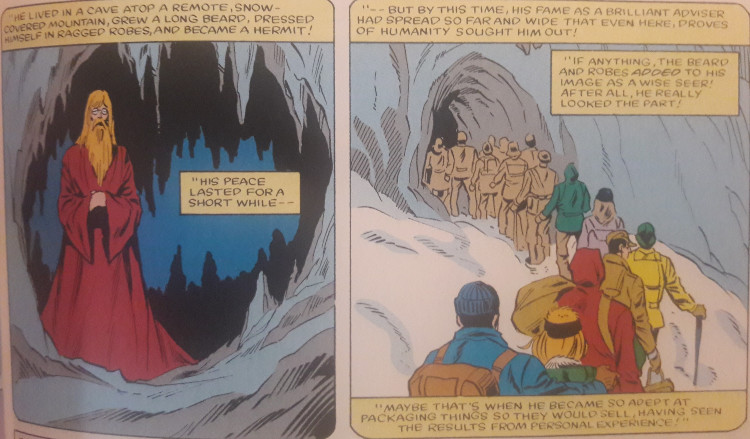 Part of this also comes from the various subplots Milgrom either introduces or continues threading throughout the issue. The awkward “Flash/Betty romance” subplot rears its ugly head here, and though I still have little appreciation for it, Milgrom at least presents the situation through a somewhat negative light, if Peter’s interaction with the two at the Daily Bugle is any indication. “I didn’t know you were so friendly with the big lug, Betty,” Peter chides Mrs. Leeds as Flash exits. Betty’s reply is snarky and unlike her--“Just because I’m married doesn’t mean I can’t have friends of the male persuasion”--and while she may be technically correct, Milgrom seems to be indicating she’s making excuses for being so chummy with Flash. Disquieting it may be, but Milgrom is presenting the subplot in a way I find comforting--the situation is wrong, and our boy Peter seems to understand that.

An unnamed scientist under the Kingpin’s employ also makes a brief appearance, discovering some interesting information about Cloak following the melee at Fisk’s headquarters in PPSSM #96. This plotline is brief but will become more important to the next few issues that Milgrom produces; if anything, it’s good to see that Milgrom is planning ahead and thinking through potential avenues that he wishes the book to travel down. These panels also offer a short yet entertaining monologue from the Kingpin wherein the big man muses over a plan he’s been forming against Spider-Man for the last few months. I’m unaware if, in prior issues, Milgrom (or his predecessor, Bill Mantlo) had seeded Kingpin’s plotting. As far as the “Alien Costume Saga” is concerned, this is the first mention of any long-gestating revenge against the Web-Slinger. Oddly enough, Milgrom neglects to reference the events of the previous story arc--where Fisk failed to use Dagger’s powers to revive his wife and ended the tale swearing vengeance on Spidey and the Black Cat. Even in later issues, where the Kingpin mentions his burgeoning schemes, his anger at the two heroes for ruining his plans to help Vanessa seems like a new thread.

These subplots, in my mind, offer more weight than the somewhat generic, one-and-done narrative Milgrom creates for Timothy Quail. The Flash/Betty plotline may be awkward, but Milgrom doesn’t make it weird for everybody. Were Peter to act okay with this development between two of his friends, one of whom is a married woman, I think my skin would be crawling. But Peter’s approach seems reflective of Milgrom’s own opinion, that these interactions will lead nowhere good. Sadly, based on the issues I’ve collected, I cannot tell you how that particular story arc ends, with one major exception I’ll probably touch on in a later post (hint: it involves Wolverine of all people). I can say with confidence, fortunately, that the “unnamed scientist” and “Kingpin’s revenge” subplots will reach a conclusion by time we hit that magical 100th issue of PPSSM. 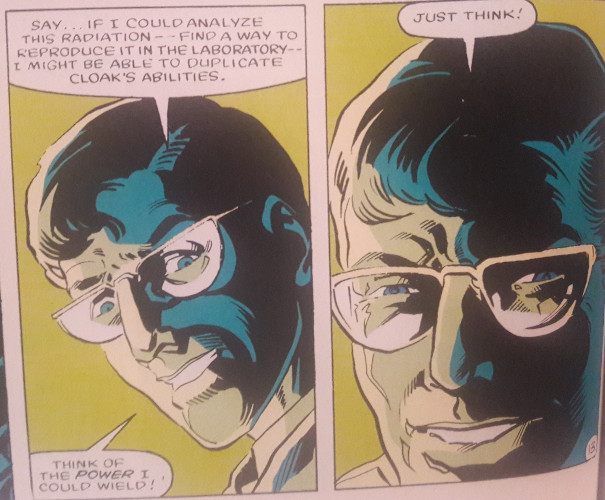 I shouldn’t complain too much about the generic overarching storyline that commands this issue. PPSSM #97, after all, is more of a filler issue, a bit of connective tissue between the muscles of larger story arcs, one Milgrom just wrapped up and the other he’s mounting towards. “Just okay” is an adequate term in describing the narrative of our young hermit...but it’s the subplots and the promises of future story arcs that boost the issue a little bit in my opinion. I had forgotten about those specific developments when I cracked PPSSM #97 open for the second time (or is it more accurate to say I cracked my trade copy open and just flipped to the issue?) and was intrigued to rediscover what I had forgotten. I tend to complain a bit about approaching familiar narratives a second or third time--my immediate family can tell you quite plainly that I have difficulty watching certain films a few months, or even a year or two, after watching them initially (my question of “Didn’t we just watch that?” is usually answered by a curt “Yeah, six months ago, Nate!”); once I’m in the midst of a narrative, however, I indubitably discover details and meaning I hadn’t picked up before. The same can be said for this issue. I guess I wasn’t as familiar with it as I previously believed.