A long-running subplot culiminates in fascinating fashion in this celebratory 100th issue of Peter Parker, the Spectacular Spider-Man 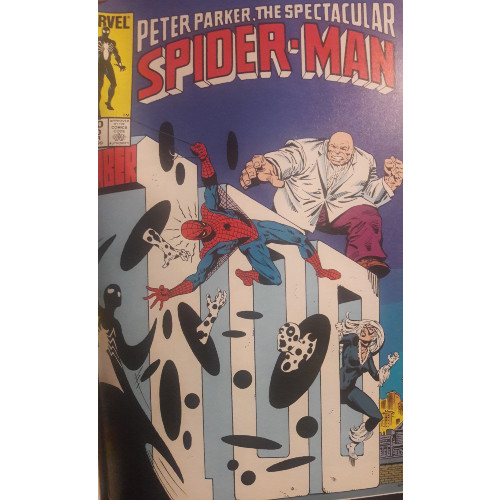 Ladies and gentlemen, please join us for a lofty celebration of magnificent proportions: the 100th issue of Peter Parker, the Spectacular Spider-Man! Much like Amazing Spider-Man and Marvel Team-Up before it, this milestone PPSSM issue debuted as a double-length Spidey extravaganza, where fans would see a rather important alteration in the life of Peter Parker and his relationship with his girlfriend, the Black Cat.

Spidey and the Cat had already faced several ups-and-downs during their time as a couple. Spidey had to wrestle with the thought of dating a thief; Cat hated learning Spidey’s true identity as the seemingly mundane and boring Peter Parker and wanted nothing to do with that side of her beloved “Spider”; Cat was left at death’s door following a gang war between Doc Ock and Owl, giving her the revelation that she really needed powers of her own to fight alongside her boyfriend; and the Kingpin eventually gave Black Cat her “bad luck” powers in exchange for occasional services from the reformed thief. As a result, the Spidey/Black Cat dynamic had been much like a roller coaster for the past several months.

The tension between the two comes to a head here...and we’ll just have to figure out if their love wins out in the end or if these star-crossed lovers turn into flaming meteors that burn up on reentry. 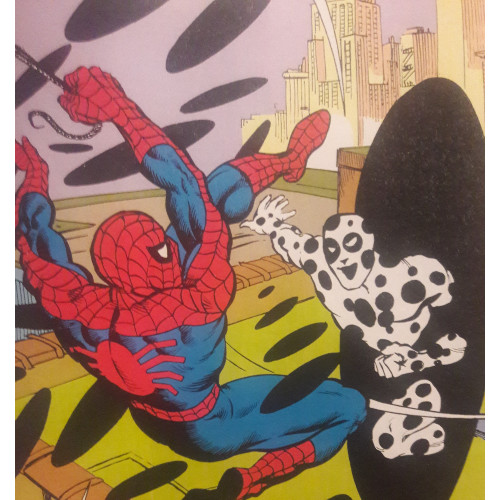 I haven’t touched on much of what’s been going on during the “Alien Costume Saga” over in PPSSM, so a brief recap: Milgrom’s time on the title has focused largely on the Black Cat and Spidey’s relationship and, given the events outlined above, one can easily concede that the couple has been through some tumultuous times together. Milgrom makes it clear that things are becoming steadily rocky between the two of them--secrets unshared, lies deliberately told, conversations withheld. Most recently, in just the prior issue, Black Cat revealed she had sewn Peter a black thread costume; though Peter will eventually use this costume out of need, he practically recoils at the sight of it now. Even later, Spidey’s webbing snaps off a nearby building in mid-swing. A fluke, perhaps? An accident? Or something more sinister?

These are the events that bring us to this issue, where Cat and Spidey, independent of one another, attempt an assault on the Kingpin’s high-rise headquarters. Having failed to break into Wilson Fisk’s domain in the previous issue (their efforts stymied by Spidey’s newest supervillain, the portal-producing Spot), each hero is determined to accomplish what seems impossible. Fortunately, though both Spidey and Black Cat attempted this same trick together in issue #99 (and, in a prior story arc, actually accomplished breaking into the same compound along with Cloak of “Cloak & Dagger” fame), Milgrom’s story doesn’t seem too repetitive. Oh, some similarities do remain--Spidey runs afoul of Spot and his portals, Black Cat’s “bad luck powers” create all kinds of crazy hijinks--but this assault feels more unique and entertaining, for three reasons. 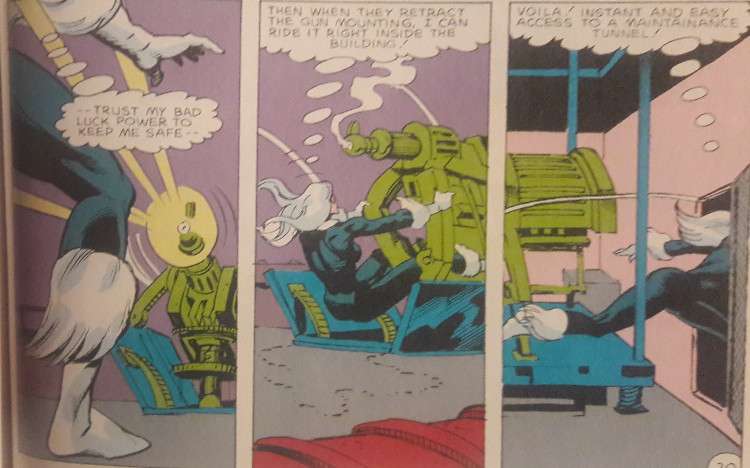 First, as I mentioned above, Black Cat and Spidey each believe the other is at home while they attack the Kingpin’s HQ. Resulting from the lack of trust each character has in one another, this decision is a wonderful display of Milgrom handling Spidey and Black Cat’s relationship. They’ve reached the point where they’re actively withholding information and plans from one another--Spidey even openly admits to himself that he’s choosing to go alone because he and the Cat haven’t seemed to be “meshing” lately--and choosing to attack separately just adds more fuel to the fire of their crumbling relationship.

Second, Spot plays a much larger role in this story than he did previously. Serving as an annoyance rather than a true villain in issue #99, Spot comes into a slightly more antagonizing role here. Having deftly learned to control his abilities, Spot harasses Spidey and keeps him from entertaining the compound for quite a long while. Milgrom’s ability to creatively express the Spot’s powers--with arms and legs popping from different portals and attacking Spidey from different angles--makes for a unique fight scene between the two. Though the Spot has gone on to become a goofier villain in Spidey’s rogues gallery--not really becoming impressive again until a Fred Van Lente tale during “Brand New Day” and then becoming much darker during a few appearances in Mark Waid’s run on Daredevil--he holds his own against Spidey here, making me wonder what would’ve happened if the character had been used a bit more seriously from the start. 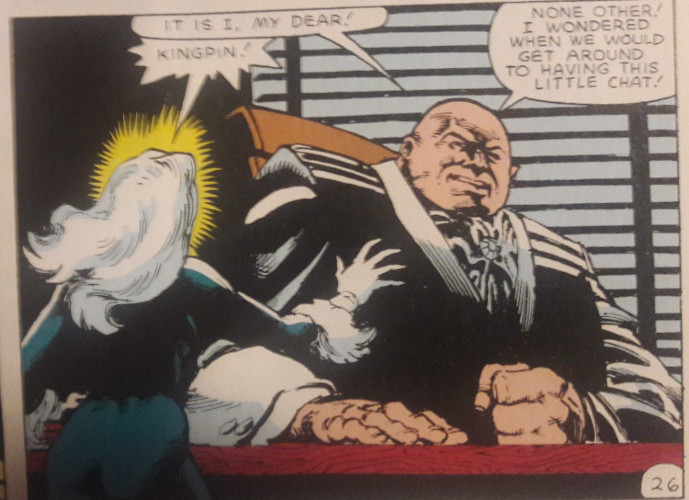 Third, both Black Cat and Spidey manage to breach the compound and each square off against the massive crime lord. Felicia’s conflict with Wilson Fisk is more cerebral, as Fisk reveals to her not only his long-standing feud with her (started, unbeknownst to the Cat, in PPSSM #74) but his true reason for supplying her with powers: revenge. And as if obtaining the Cat’s loyalty wasn’t bad enough, Fisk also reveals his true machinations by telling her that her bad luck powers have been negatively influencing Spidey as well and will eventually kill him if they spend too much time together.

Fisk’s confession is a dramatic one that propels the conflict through the roof. Though I can’t say for certain whether this was planned since the Cat and Kingpin’s previous encounter in #74 (which was written by Bill Mantlo, not Milgrom), and while I’m not familiar with those earlier issues, this twist, as presented by Milgrom, doesn’t feel too ridiculous, nor does it seem like it comes out of nowhere. Usually, when a villain confronts a hero and utters the words (or a variation of) “That was my plan all along!” or “You’ve fallen into my very clever trap!” you get the sense that the writer is trying to force past events into the present narrative, without ever having intended for the villain to have actually plotted that long. It’s just more dramatic to insinuate that this devious mastermind has been hand-wringing and planning the entire time. Milgrom’s twist, however, feels legitimized here. I can see a criminal mob boss like the Kingpin scheming revenge on the Cat--it certainly explains, not only his reaction to the events in PPSSM #74, but also gives a good reason for why he would give her powers. Fisk wasn’t just selling superpowers for the Cat’s help; he was coordinating a complex plan against his arch-foe, Spider-Man. 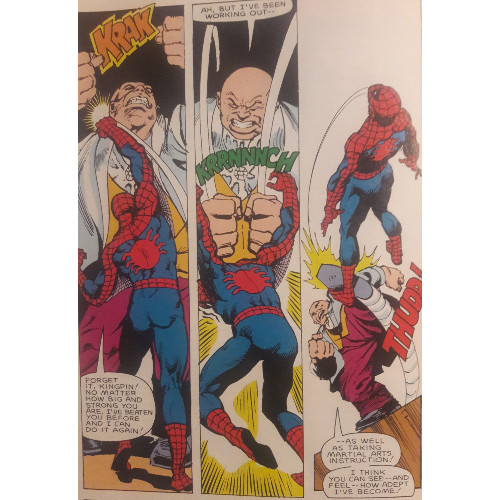 Spidey’s confrontation with the Kingpin is far more physical and stands out as one of the best matches I’ve seen between the two opponents (the top spot is taken by the prison brawl during J. Michael Straczynski’s “Back in Black” story arc). When Spidey learns of Felcia’s duplicity from Fisk, he’s sent into a rage and attacks his enemy off-kilter. Kingpin uses the hero’s emotional imbalance and throws his weight around here, getting in several licks on Spidey--slamming him on his back, pounding him with both fists--and tearing out a metal stairway to get at his enemy. Spidey--who, between the Spot and the Kingpin, has become a costumed punching bag the entire issue--eventually gains the upper hand, physically beating back the crime lord before the villain uses trickery to escape further retribution. The battle is short, but still titanic, and I applaud Milgrom’s ability at showcasing Kingpin’s physicality. Large as he is, and given how much he relies on his criminal influence and deep pockets to hire assassins and mercenaries, Kingpin stands out more as a mastermind than a fighter, meaning it’s easy to forget just how much of a powerhouse he can be. Do I believe he’s strong enough to give Spidey a fair tussle? Not really, so an even fight like this one may be a little implausible. Spidey can, and has, gone mano-a-mano with the Hulk on several occasions, and I’d wager the Jolly Green Giant could beat the fat out of Kingpin better than a Weight Watchers program. Nevertheless, the fight is fun to watch develop.

The issue ends on a heartbreaking note for our superpowered couple. Black Cat, ready to break things off with Spidey, is stunned and upset with Spidey dumps her first. Felicia’s enraged reaction that Spidey cuts it off with her before she has the chance may seem petty to some, but I found it fascinating. Knowing how much she had hurt Spidey by dealing with the Kingpin, Cat is determined to set things right by leaving the hero, understanding full well that continued close proximity will end up hurting him further. You’ve got this former criminal, a woman who has done so much wrong and hurt so many, ready to make an excruciatingly difficult decision (voluntarily losing the man she loves) to keep Spidey safe...and Spidey denies her that. Spidey is unaware of her thought process, but this doesn’t keep Cat from feeling hurt as he annuls their relationship.

As for Spidey...well, can you blame him?

“Breakin’!” (as in “heart-breakin’!” and “break in!”--see what Milgrom did there?) is a seminal issue in the life of PPSSM. Starting off as your traditional, action-packed romp, the issue transforms into a bitter reflection of Spidey and Cat’s relationship and how one little kitty unraveled her ball of red-and-blue yarn too quickly and violently after the fat man gave her some milk. As I read the ending, I couldn’t help but wonder if either character handled this situation correctly. For a while now, Milgrom had been pushing the idea that their relationship was fraying and that something needed to happen before it snapped completely. With this 100th issue, Milgrom leaves you with the understanding that Black Cat acted incorrectly, even if her intentions were noble...but you also wonder if Spidey reacted rightly or if there was some way he could have forged on and re-knotted the thin strand holding him and Felicia together. Or, maybe...maybe these lovers were doomed from the start.