This inaugural issue ends the "Alien Costume Saga" on a high note, a fantastic "final" conflict between Spidey and the symbiote 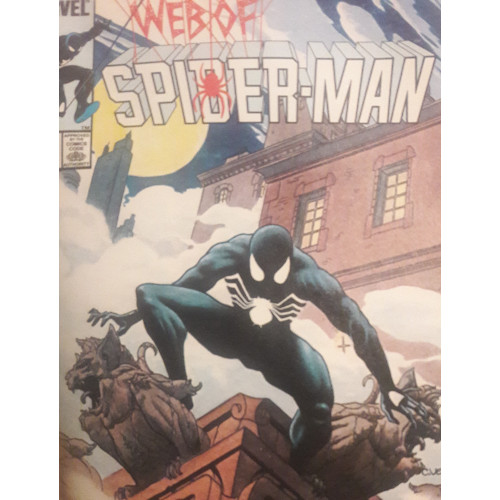 Back in ASM #258, Peter Parker had crossed a particular errand off his list--visiting Reed Richards of the Fantastic Four to get his alien costume analyzed. Peter found out that his costume wasn’t just synthetic extraterrestrial cloth that adapted to his every mental command--it was a living alien organism seeking to bond with its current host forever! The terrified hero managed to tear the costume off him with a little help from Mr. Fantastic and the Human Torch, resorting to his classic red-and-blue costume, his only regret not having a costume that responded to his thoughts. Though I’m sure that’s a small price to pay compared to serving the rest of your natural life as a parasitic lifeform’s sustenance.

But not even the great Mr. Fantastic could hold the alien costume forever. Eventually, the symbiote was released and spent a few issues tracking down Spidey. During this time, our hero discovered that MJ had known about his identity for years, rescued Harry and Liz Osborn from the clutches of the Hobgoblin shortly before the birth of their son Normie, celebrated J. Jonah Jameson and Marla Madison tying the knot, kept a sleazy reporter from publishing photos of Peter's face, and perhaps most importantly, broke off his relationship with the Black Cat. This, along with his wounded relationship with Aunt May and MJ's reveal, meant the blows just keep hitting Peter when it came to his standing with women.

I guess that means it was the perfect time for the spurned Parker to come face-to-face with his spurned costume. 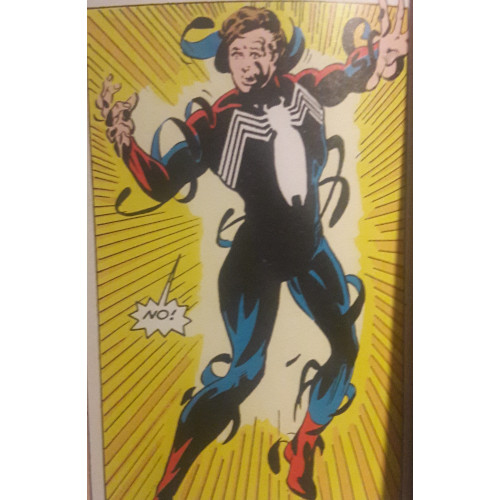 The creative team behind the final issue of Marvel Team-Up return for the first issue of this brand-new Spider-Man series, with Web of Spider-Man effectively serving as a replacement book for MTU. As Spidey was a series regular in that original team-up book, WSM could easily be considered the second time Spidey had three, concurrent, ongoing series published on a monthly basis. Sporting a painted cover by artist Charles Vess (who would write and illustrate the “Spirits of the Earth” graphic novel a few years down the line), the first issue of WSM marked the ending of an era, the final symbiote story...but only for a moment.

Simonson’s script propels readers into a story attached directly to the end of Peter Parker, the Spectacular Spider-Man #100, where Spidey had gone toe-to-toe with the Spot and the Kingpin and had broken up with Felicia Hardy. With a mind perhaps awhirl with thoughts of his former love, Spidey fails to notice that an eerie black ooze has mimicked his typical Spider-Man costume. Donning the outfit, Spidey is amazed and terrified when the symbiote reveals itself and begins the permanent bonding Mr. Fantastic had warned our hero about back in ASM #258.

This may just be me, but I hadn’t viewed the symbiote as something frightening or monstrous until this issue. The idea of an alien parasite taking a hold of Peter didn’t come into play until ASM #258, and despite Tom DeFalco’s masterful display of Peter’s emotions once he discovers the truth about his costume, the terror of Spidey being physically usurped by the symbiote was quickly done away with once Mr. Fantastic and the Torch got involved. The horror of the suit felt one-and-done. Under Simonson’s pen, however, the alien takes on a new dimension: no longer needing to hide its true intentions, the symbiote lashes out, forcefully attempting to bond with Spidey. Though the symbiote was never truly depicted as harmless in prior stories--Peter often stated he wanted to get the thing looked at, giving it a slight air of menace, and readers were aware that the costume took Spidey on “joy rides” around New York while he slept--it wasn’t given the characterization that Simonson offers here. In this issue, the symbiote is given movement, tendrils that grasp at walls to keep Spidey stuck and organic webbing that releases from buildings when it should stick...it does anything it can to keep Spidey from reaching the Baxter Building. 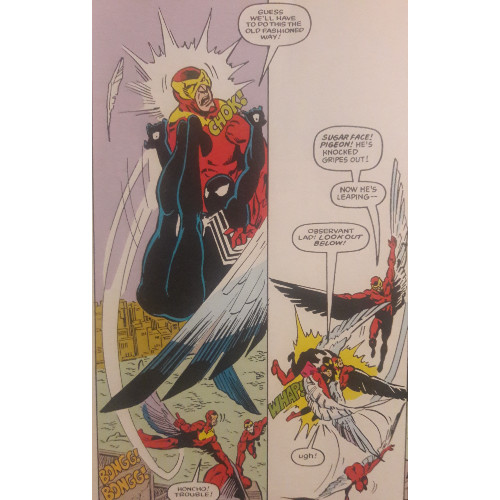 This feels like the first time the symbiote is considered a character in its own right, as its granted agency to move on its own independent of Spidey’s commands. Readers would have seen previous issues show how the symbiote controlled Peter’s body while he slept, but this was still during a phase when even Spidey didn’t know exactly what his alien costume was. Now that the symbiote’s true identity and intentions have been brought to light, Simonson turns it from a costume into a character. It has clearly-defined goals--keep Spidey away from the Baxter Building while trying to usurp his body completely--and even somewhat of a personality. Though Spidey and the reader understand the horror of a living alien trying to take control of his body for good, nowhere does Simonson indicate that the alien is being cruel or vicious in its efforts. I don’t believe you’re supposed to empathize with the creature, but you’re not led to loathe it passionately either. The symbiote is meant to intrigue you, interest you in what it is exactly and why it has such an attachment (and quite a literal one!) to Spidey.

Future stories will expand upon the symbiote’s hatred of Spider-Man, especially when it bonds with Eddie Brock to form Venom, but I can’t say even the seeds of that menacing attitude are planted here. Between ASM #258 and this issue, other stories had hinted that the symbiote was growing enraged with Spidey and plotting its revenge while being contained in the Baxter Building. But Simonson’s version of the symbiote seems to lack those qualities, choosing instead to want to bond with Spidey to reunite with him, to return to what it knew was familiar. As Simonson indicates at the story’s end, the symbiote had been a rather emotionless creature on its home planet, learning how to feel from its time spent serving as Spidey’s costume. Simonson uses this to explain why the symbiote saves Peter’s life at the end of the comic--pulling him away from the pealing church bells Peter was using to remove the costume--insinuating that the symbiote even sacrifices its life to save the man who was trying so hard to get rid of it. The symbiote returns, naturally, alive and well when it bonds with Eddie Brock, but Simonson shows that the alien, even if it is angry at Spidey for separating them, still has residual emotions for the hero.

Does this mean Simonson’s depiction of a less lethal alien contradicts the previous issues that tee’d up the costume as spurned and angry? Not necessarily. Though prior indications that the alien would return in a vengeful fury would have made for an entertaining story, I find Simonson’s version more engaging. Not to sound sappy, but isn’t this how certain relationships work between people? Angry and upset as they might make you, you still feel a fierce loyalty to and connection with them. Despite its simmering rage, the symbiote still felt connected to Spidey, as he was the only Earth-bound host it had known, as of this story’s writing. Seeking out something familiar, something it was attuned to already, makes a lot of sense. Prior stories may have indicated that the symbiote wanted to bond with Spidey, not just out of need, but as a way of asserting its revenge, but Simonson pushes a more humanized agenda.

In the background, we’re given a subplot detailing the story’s villains: a group of winged thugs going by the name “Vulturions.” Apparently, one of the crooks learned how to assemble a harness and wings from Adrian Toomes while they served a prison stint together (you’d think after being tricked into giving up the location of his wingsuit by Blackie Drago that Adrian would be a bit more concerned about copycats) and assembled suits for his fellow cronies. These villains are a tad generic, feeling more like a Vulture ripoff than as engaging successors to his legacy. Answering the question “What if we had a team of Vulture-themed villains instead of just one?” certainly makes for an entertaining concept to explore, but considering these are just a bunch of faceless thugs who serve as one-off foes with little or no impact made over the last thirty years since their creation, the Vulturions do more falling than flying. Spidey gets entangled with the group while trying to work out how to remove his costume, so I do have to give props to Simonson for enhancing the conflict. I love when writers give heroes a primary conflict to deal with and then add in a second shot of menace to heighten the tension. Despite their lack of legacy, the Vulturions at least trouble Spidey decently for this one issue. 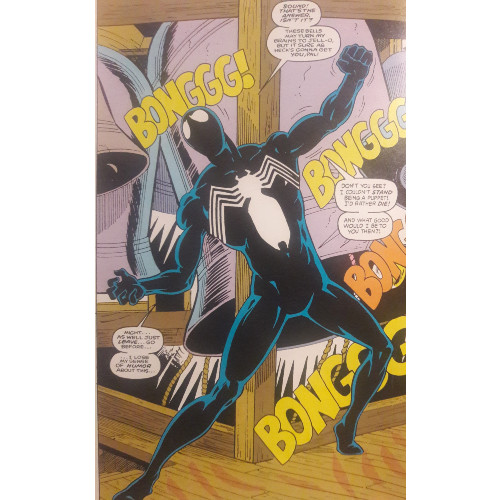 Web of Spider-Man #1 should also be regarded for its final third as Spidey finally gets the costume off him. Knowing the symbiote’s weakness to sound, Spidey approaches the belltower of a nearby church, letting the painfully loud, clanging bells assault the symbiote and nearly killing himself in the process. This is a scene that has become iconic in Spidey lore and has been used in both the 1990s animated Spider-Man series as well as the 2007 film Spider-Man 3 by Sam Raimi. Spidey’s ability to fight off the pain in his desperation to remove the suit from him (“I couldn’t stand being a puppet!” he shouts. “I’d rather die!”) makes for a valiant struggle. Knowing he first saves the life of one Vulturion who has crashed too close to the bells makes the fight even more admirable. A gorgeous full-page panel of Spidey raging against the symbiote as the bells pound all around him cements the scene as powerful and will be an image I remember alongside other well-regarded panels.

Though the villains of this issue serve only offer additional conflict, serving no other purpose to the story nor crafting a legacy for themselves in future tales, the rest of Web of Spider-Man #1 is not as forgettable. Never Spidey’s most popular series, WSM was the shortest of what I’ll call the "Big Three" (Amazing, Spectacular, Web of..), and from what I’ve read, didn’t sell nearly as well as the others. Still, this first issue effectively brings the “Alien Costume Saga” to a close in memorable fashion. From Spidey’s dramatic resistance against the symbiote, to his victory over his clingy costume to the tune of Catholic service bells, WSM #1 ends an era of Spidey’s history and, unknowingly, sews the seeds for a dark antagonist who will forever alter our hero’s life.