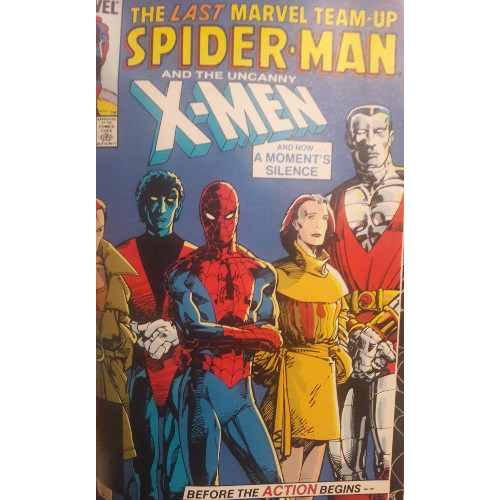 For 13 years, Marvel Team-Up had showcased several alliances between various superheroes, pairing Spider-Man with another hero or group for all but ten of the main issues. The series, preceding the long-running Spectacular Spider-Man title, could technically be considered the first secondary Spidey series, as he appeared so often. I haven’t read many issues of MTU, as they unfortunately have not been reprinted in mass-produced collections other than the black-and-white Essentials. Whatever issues I have snagged have been through other volumes collecting various Spidey stories which include MTU issues as they can.

But in the midst of the "Alien Costume Saga," MTU came to an end. Its final issue featured a team-up between Spidey and the merry mutant band of X-Men against two Juggernauts.

“'Tis Better to Give” 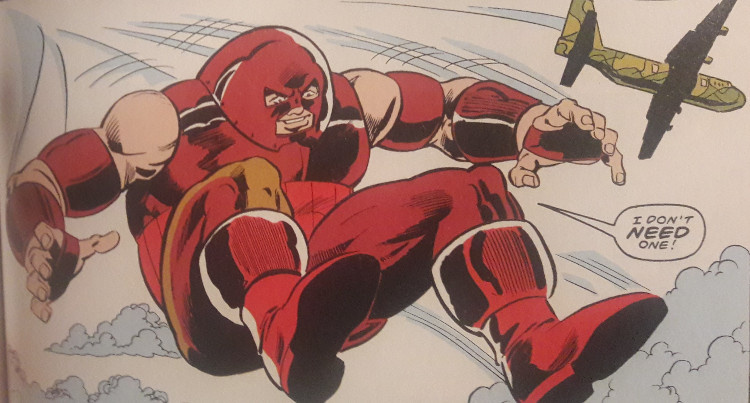 As we saw a several posts ago, Spidey first encountered the X-Men enemy Juggernaut in a two-part ASM epic by Roger Stern that has gone down in history as an absolute classic amongst Spidey fans. Simonson’s issue of MTU serves as a quasi-sequel to that celebrated storyline; though not tethered directly to “Nothing Can Stop the Juggernaut,” the final issue of MTU references it enough for readers to understand that the Juggernaut hasn’t forgotten about the time Spidey buried him in concrete.

Simonson’s entire story, actually, is nicely connected to events happening throughout other Spider-Man series at the time. Readers perusing this issue in isolation may not be familiar or interested in those subplots, but as someone who read the "Alien Costume Saga" cover to cover, I appreciated Simonson’s ability to squeeze in references to current storylines in other series--Peter worries about his relationship with the Black Cat, a recent falling out with Aunt May over his decision to drop out of grad school, MJ dropping the bomb that she’s known his identity as Spider-Man for years, and his need to get a photography assignment from the Daily Bugle. These are the typical troubles included in your average Spidey yarn, but Simonson takes time to weave them into her plot. For the most part, these references slide in seamlessly, pointing to Simonson's understanding of and ability to pay attention to larger Spidey continuity. The only area this doesn’t work is a brief comment Spidey makes about Harry and Liz Osborn: “Hey, isn’t Liz and Harry’s baby due soon?” he asks himself as he swings off to find the Juggernaut. The thought is random and not connected to other elements in the story, ending up feeling like a forced comment. 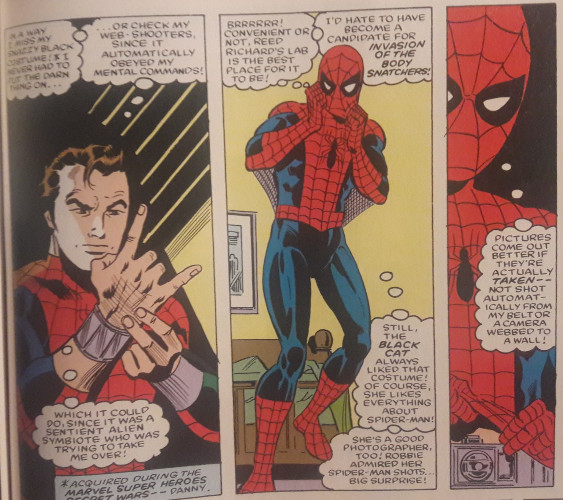 This entire story, in one sense, is a giant nod to Stern’s classic two-parter. As Juggernaut seeks out the Ruby of Cyttorak in Korea, he reflects on his defeat at Spidey’s hands (“The last person that even slowed me down was Spider-Man!” he shouts at some soldiers as he withstands a tank, as one does when they're an invulnerable force of nature). In the context of the story, his reminiscing makes some sense: having failed to get Madame Web for his friend Black Tom Cassidy, Juggy wants the Ruby instead. Several years after this issue was published, Roger Stern wrote a more direct sequel to his original Juggernaut story that fully explained the aftermath of the original battle between Spidey and Juggy; Simonson doesn’t offer any context for that aftermath--at this point, I’m pretty sure it’s just accepted that Juggernaut freed himself somehow--but she makes Cain’s anger towards Spider-Man clear. Not everything gets explained, but in the issue's context, it doesn't need to.

This leads into a plot where the Juggernaut, Ruby in hand, shares his power with Black Tom Cassidy, effectively turning him into a walking powerhouse like Cain Marko. Tom is less than enthusiastic about the transformation, battling Juggernaut before the two spot Spidey and put aside their differences to go toe-to-toe with the Web-Slinger, in part for Cain to get revenge against the man who left him buried alive in concrete. Tom's reaction is an interesting take by Simonson. His initial anger, though it catches Juggernaut off-guard, feels appropriate. Tom isn't immediately obsessed with his newfound power; he's worried about side effects and the impact that being a living, breathing tank will have on his life. 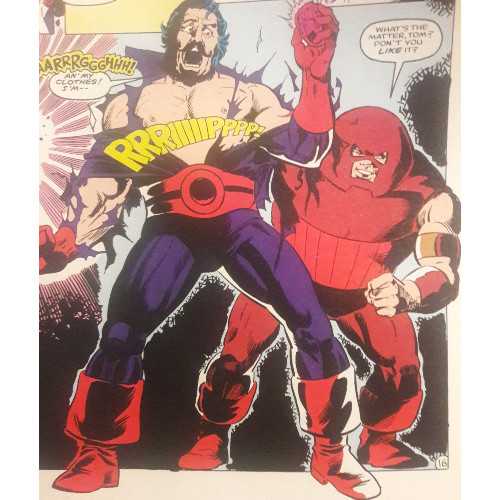 I'd like to note that Juggernaut never directly seeks out revenge on Spidey--it’s more of an afterthought once he spots Spidey taking photos of his battle with Tom. Normally, something like this would seem coincidental and only frustrate me. I wasn’t upset with this development, however, and I’ll attribute a lack of frustration to how Simonson constructs her story. Juggernaut spotting Spidey may seem random--“Well, look at that,” I’d say, “Spidey just happened to be in the same place as Juggernaut and Juggy just happened to catch a glimpse of him out of the corner of his eyes”--but Simonson has Spidey deliberately seek out Juggernaut, purposefully positioning him in the same area. Spidey doesn’t give much of a reason for wanting to find Juggernaut, but the reader should realize by now that Peter is simply driven by a desire to right wrongs. Having one Juggernaut is trouble enough. Two could be disastrous.

The “dual Juggernauts” concept is what works to make this story entertaining. The fight's first third is a lot of Cain smashing through soldiers and buildings, which doesn’t feel terribly unique. “Smashing stuff” is Juggernaut’s M.O. and after witnessing his last rampage in Stern’s story, the last thing we need is a repeat. Instead, we get two Juggernauts who are on a single-minded mission to crush Spidey like the annoying little big he is. Stern’s story treats Spidey like an annoyance to the Juggernaut, and as brilliant an idea as it is, I’m glad Simonson doesn’t go the same route. Having been defeated by Spidey once before, Juggernaut’s perception of the hero is altered. Now, he’s out for blood. 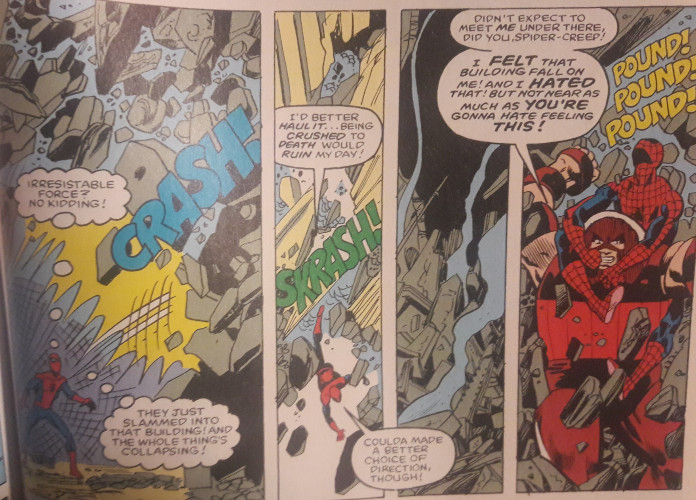 For a title called Marvel Team-Up, Spidey spends an extended period of time holding his own against the two Juggernauts. With the power of Cyttorak split between them, neither man is as strong individually as Cain typically is on his own. But, together, they’re a force to be reckoned with. Throughout the issue, Simonson presents impressive displays of power from both Cain and Black Tom--Black Tom lifts a building to drop on Colossus once the X-Men arrive; Cain batters his way through rubble to reach Spidey from below; in their initial conflict, both men drop from a high rise apartment, cracking concrete without injury to either one. Simonson’s Juggernauts aren’t quite as formidable alone as the character was in Stern’s tale, but both create entertaining fights between each other and against Spidey and the X-Men.

When the X-Men do show up, Simonson creates some additional entertaining conflict that goes beyond punching and building-dropping. Colossus tears off Juggernaut’s helmet, a classic tactic used against the supervillain, and Rachel Summers (the daughter of Scott Summers and Jean Grey from an alternate future) attempts to penetrate his mind. She finds out that--surprise!--the Juggernaut has fitted himself with a second, smaller helmet to repel her attacks. For a character who so often has easily fallen prey to the “rip off his helmet and hit him with a physical brain blast” maneuver, this additional helmet is quite ingenius on Simonson’s part. She works her way nicely around an old weakness of the villain’s that worked so often for the old X-Men team but fails for this newer band of heroes. It’s a small part in the story, and not a huge revelation by any means, but Simonson’s ingenuity makes it stand out. 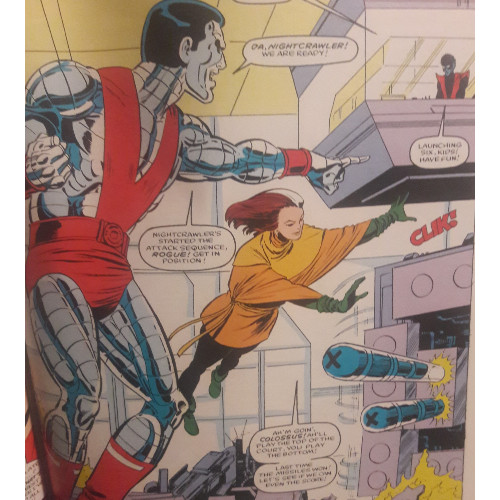 Simonson's work with the X-Men can, sadly, be hit-or-miss throughout the issue. Colossus and Nightcrawler just seem to be present for the tussle; Rachel Summers debates whether to tell the X-Men about her future where, by keeping half the Juggernaut’s power, Black Tom was able to fight against the Sentinels on mutantkind’s behalf. Though she worries if stopping Tom will jeopardize her future, Rachel acts appropriately against the villains. It’s a small inner struggle, one that doesn’t go anywhere beyond this issue, if the internet is correct. Still, even a hint of characterization on Rachel’s behalf is better than nothing.

Rogue is the breakout star of the issue where I’m concerned. Absorbing Tom’s half of the Cyttorak power, Rogue spends a short time going toe-to-toe with Cain, later absorbing his power and almost going insane. Simonson nicely carries in the repercussions of Rogue using her abilities, absorbing not only energy but memory as well, and momentarily scrambling her identity. All this lasts only a few pages but it introduces stakes beyond “villains rampaging through city streets.” 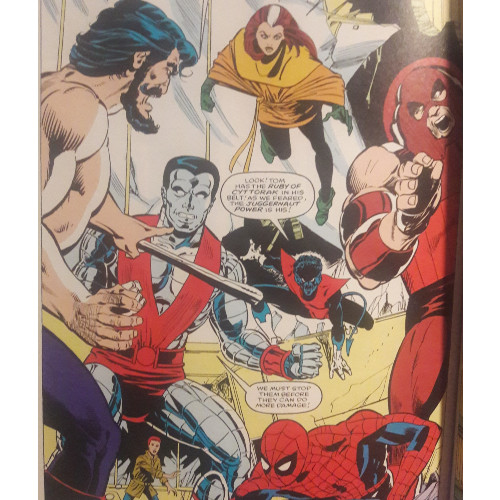 Perhaps the most interesting part with the X-Men comes from some Spidey dialogue: “Maybe I had you guys pegged wrong,” he tells the team at battle’s end. Initially, when the team appears on the scene, Spidey bemoans their intrusion, citing incidents during the Marvel Superhero Secret Wars series that leads him to believe that “those unpredictable maniacs’ll side with the villains!” Spidey is, I assume, commenting on a general distrust in the X-Men. As mutants, the X-Men have always been on the fringe of superhuman society, despite their frequent appearances and inclusion in events. Spidey approaches them with slight distrust, though not in the same way Simonson had him comment on Alpha Flight in a different MTU issue. In that annual, Spidey just saw the Canadian superteam as a bunch of wacky jerks. Here, he approaches the X-Men with a better understanding. Both lines are well-placed by Simonson, a good nod to the Secret Wars series as well as indication that Spidey is progressing in his relationship with the merry band of misfits.

Though certainly a standalone issue, Simonson has no qualms about tethering her plot and characterization to what has gone on before without forsaking the entertainment value of the story. Details such as Juggernaut’s second helmet, Rogue’s wacky powers, Cain’s rage against Spider-Man and his gift as a replacement for Madame Web, Rachel’s concerns, and Peter’s worries all find a place in this issue. If any of those subplots interest you, you’re not going to be able to get the larger scope of any of them if you only read this issue. Prior and subsequent issues of Spidey and X-Men series will be beneficial in fleshing those concepts out. Still, Simonson proves she’s paying attention to larger continuity, finding unique strands to bring Spidey and the X-Men together and crafting an issue that you’ll want to read perhaps more for the historical anecdotes and references than the story and actions. This one is for the continuity nuts out there, like myself, and we highly appreciate the gesture.