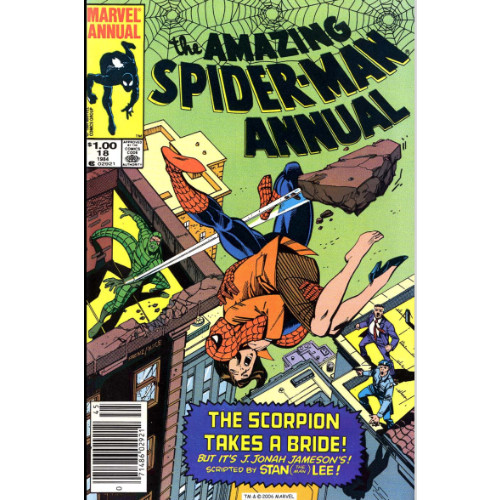 “Mac Gargan” is not a name I would put on a list of “New York’s Most Eligible Bachelors.” Otherwise known as the Scorpion, Gargan is not the kind of guy I’d picture in a tux standing next to a beautiful bride ready to give his wedding vows.

(then again, I would’ve said the same thing about Doc Ock, but he almost got hitched to May Parker anyway...wow)

The same sentiment also might ring true for one Jolly J. Jonah Jameson, curmudgeonly publisher of the Daily Bugle. Surly and stingy, JJJ doesn’t come across as the type any self-respecting woman would want to happily settle down with. The emotional outbursts, constant cigar smoke, Hitler-esque mustache, and his fanatical hatred for all things Spider-Man make for a doozy of a human being to put up with, let alone pledge to be wed to til death does them part.

And yet, in this ASM annual, both Scorpion and Jameson have wedding plans. For Jameson, bells are ringing loud and clear for his impending nuptials with Marla Madison, whom he met during one of his “capture Spider-Man with a Spider Slayer” misadventures. For Scorpion, the aim is to annul the marriage in his own special, supervillainous way before the blessed couple can even say “I do.”

“The Scorpion Takes a Bride" 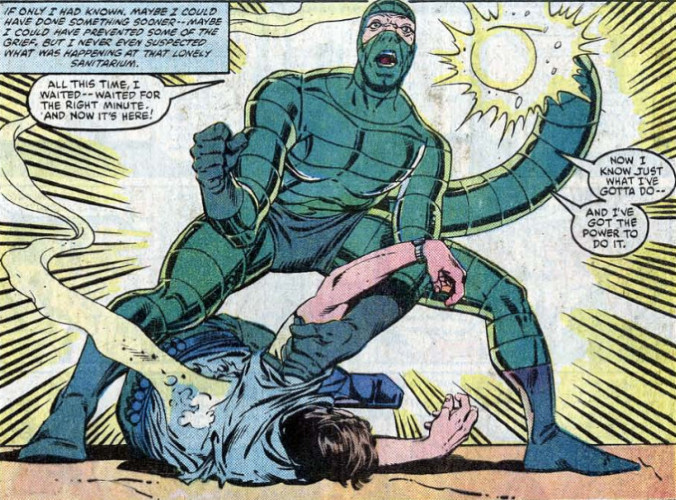 This annual’s splash page triumphantly crows the return of Stan Lee, proclaiming this issue to be his first Spider-Man story in 12 years (which most likely means he hadn’t written anything Spidey-related since his last ASM issue, #110, from 1972). Any worries that “The Man” has lost his touch in writing Spidey prose is quickly dosed. I was genuinely and happily entertained by Lee’s dialogue in this issue. His over-the-top and exposition-driving dialogue from comics of yesteryear is largely done away with, replaced with a streamlined way of phrasing replete with jokes and puns corny enough to make any Spidey fan grin. Fantastically, he relegates text boxes, not to exposition, but to Spidey’s inner monologue as he tells the story from his perspective. I don’t know if text boxes did this often during this time, replacing description with dialogue (it is a trend you’ll see in later comics in the 21st century), but doing so allows Lee to get Spidey’s voice incorporated throughout the whole story, not just in the words the hero verbalizes out loud.

Here and there, the occasional odd wording bubbles to the top, perhaps the most egregious being an exaltation Spidey gives his webbing after using it to slow down a falling helicopter: “If web-strands were walruses, I’d have fed ‘em some fish right then and there!” he proclaims. In other places, Lee weaves some well-worded and nicely thought out metaphors to uniquely describe what’s going on in a particular scene (“Therapy!” Spidey rants at one moment. “There was as much chance of that healing the Scorpion as there was of milkshakes curing Dracula!”). But this turn-of-phrase, comparing Spidey’s web-lines to massive marine mammals of all things, utterly fails to roll off the tongue. 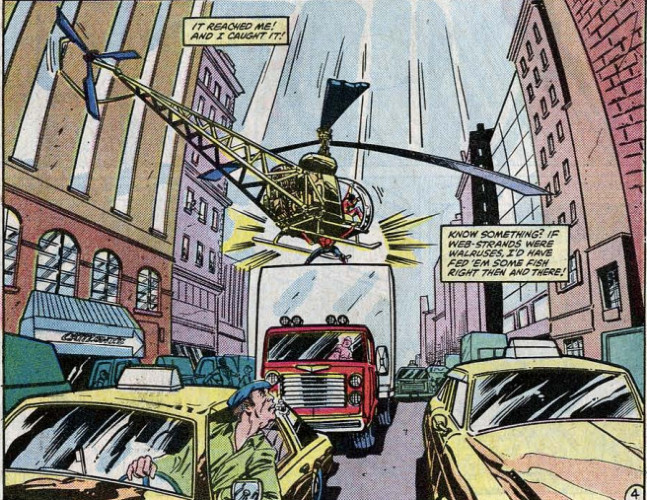 Lee’s story reads very much like one of his earlier tales and pulls pieces that the writer first presented in ASM #20, the first appearance of the Scorpion. Longtime fans will know that JJJ was responsible for the Scorpion’s creation, so when Gargan hears that Jonah is tying the knot with Marla, he breaks out of the sanatorium he’s been institutionalized in, swearing revenge. He proceeds to kidnap Jonah’s son, John Jameson, the famed astronaut who also happens to be receiving treatment (recovering from time spent as the Man-Wolf) at the EXACT SAME sanatorium where Gargan’s staying. Lee will later give an explanation that implies why this might be the case, at least making it known that Jameson is fully aware that his son and Gargan were committed to the same institution. This of course begs the question: why? Why would Jameson allow such a thing? Beyond the reason that JJJ later offers, it seems remarkable that he would let his only son be in the same place inhabited by a man who’s sworn vengeance upon Jameson. Of course the Scorpion breaks and kidnaps him! Naturally, we can conclude this is all done for the convenience of the plot, which I think part of me can brush aside. Still, the point remains a bit bothersome.

Peril ensues after the Scorpion kidnaps John, with Jameson and Marla becoming additional targets of his revenge. “Scorpion vs. Jameson” is a deep-seated subplot within Spider-Man lore, and though other writers have explored the concept over the years, it seems fitting that the Scorpion’s plot is crafted by Lee. Coming in at nearly double the page length of a regular issue, this annual gives Lee the space to create the yarn...and weave it well he does. Spidey soon becomes front-and-center as the only man capable of stopping the Scorpion’s bloodthirst. When cops led by Captain Jean DeWolff (a nice nod by Lee to Peter Parker, the Spectacular Spider-Man continuity) fail to apprehend the villain, Spidey swoops in to keep Scorpion from kidnapping Marla. Lee nicely juggles new elements, like Captain DeWolff and the impending nuptials, creating a blend of both the familiar and unique. On one hand, this is very much a Stan Lee issue, centered on a conflict he initiated way back when; on the other, this old rivalry is settled within a modern landscape (for 1985), allowing Lee to impressively adapt to the times.

Lee writes some fantastic battles between the insect-inspired duo--a fight in pitch darkness illuminated only by the flash of Scorpion’s stinger; a tussle across the rooftops as Scorpion bounds after Spidey; and a fierce fistfight in a furniture warehouse that wraps up the conflict between the two characters. Though the Scorpion has never been regarded as one of Spidey’s top tier villains--he’s never caused Spidey nearly the hassle or grief the Green Goblin, Doc Ock, or Venom have--Mac Gargan isn’t exactly a 98-pound weakling. Generally accepted to be stronger than Spidey and armed with a prehensile tail (that’s the phrase that comic book creators have long called it), Scorpion is quite the enemy to take down. Spidey has to rely on his own fortitude and speed to battle the villain, and while his victory is by no means ingenious (believing he can’t beat his slightly larger opponent at full strength, Spidey manages to wear down Scorpion down first), the battles are still thrilling and entertaining; having Stan Lee at the helm, crafting yet another furious fracas between Spidey and one of his infamous antagonists is the icing on top of the cake.

Though the issue is intended to be a standalone story, Lee includes appropriate references to events and circumstances happening outside of the annual, proving himself to have not lost his masterful command over continuity. This is, after all, the man who helped forge several crossovers between his characters, including a certain team of heroes you may have heard of called “The Avengers,” whose roster was very much dependent on whichever heroes were present for that month’s caper (e.g. if Thor was off-planet during the events of one Avengers issue, he naturally would not appear in that issue). Lee's understanding of wider Spidey continuity helps add bountiful details here--not only does Jonah and Marla’s relationship take center focus for this annual, but Lee also drops in references to Spidey ditching his black costume (which had happened in ASM #258), includes Jean DeWolff as a minor character (again, a nice reference to PPSSM), brings Ned Leeds back from a European assignment, and references John Jameson’s recent struggles as the Man-Wolf. These small details enrich the story, tethering it to the larger Spider-verse that it belongs to while not distracting from the main narrative. 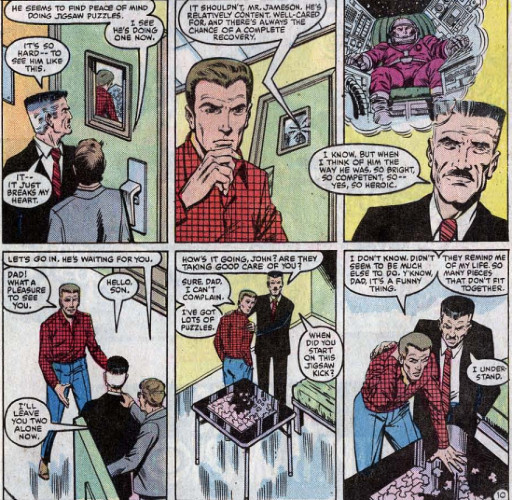 Some awkward language aside, Lee returns to ASM in spectacular fashion, crafting a (mostly) well-https://keenlinks.com/stuff/posts/asma18-1.jpgwritten story that reads more smoothly than some of his previous work from prior decades. That isn’t to say I dislike reading Lee’s old work, especially some of his tales alongside John Romita. I’ve always found those original stories, though cheesy and overly dramatic, highly entertaining and wondrously capable of telling good stories while forming foundations for the corner of Spidey’s world as we know it today. As shown by this annual, Lee’s wording evolved tremendously in the 12 years since he last penned ASM. Backed by a fairly standard but still amusing Spider-Man story that incorporates several elements from past tales, Lee’s return to the Web-Swinger’s world, a place where he can flex his dramatic and humorous muscles once more through the lens of his most popular hero, is a welcome reappearance.