Peter Porker isn't exactly the best parody of Spider-Man, but he works hard to try to become endearing 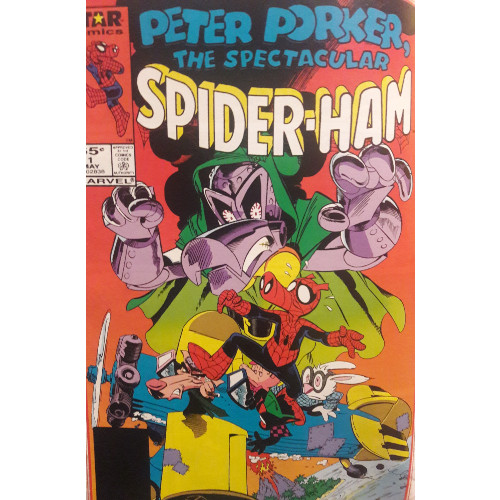 After receiving an introductory one-shot (Marvel Tails #1), Spider-Ham, that swine-inspired parody of Marvel’s web-headed Spider-Man, swung into his own monthly series about a year-and-a-half later. The porcine protector has remained surprisingly relevant since his creation, most recently making his cinematic debut in the much-praised Spider-Man: Into the Spider-Verse. We've already examined his beginnings; now we take a look at his continued impact.

This post, I hope, will also serve as a much-needed breather following the heady era known as the "Alien Costume Saga." I've spent several months describing each and every minute tale within the "Saga," meaning I'm grateful to switch to something a bit more expositive. No nitpicking the particulars here. We dive in, snout first, like a truffle-hunting pig, digging through the mud looking for gems. 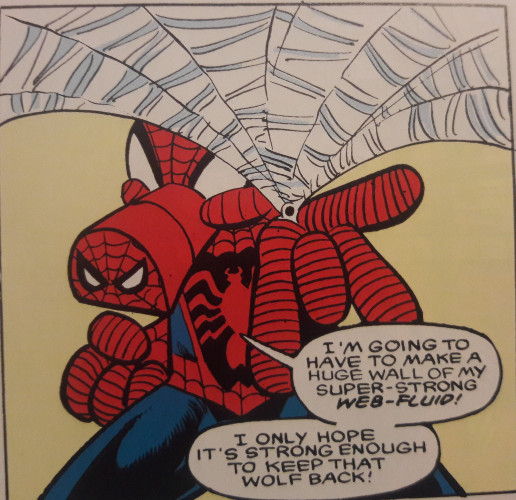 It’s difficult discussing Spider-Ham as a series, since it feels more like several one-shots instead of a sequence of intertwining narratives with plots, subplots, and characterization. In keeping with a Looney Tunes comparison I made in the Marvel Tails blog, “Spider-Ham really does feel like a cartoon you’d watch on Saturday mornings—episodic segments that don’t really blend together in important ways.

Hints of overlapping narrative shimmer through here and there. Spider-Ham runs afoul of the dastardly Ducktor Doom a few times, but the villain’s appearances are so paltry (or would that be “poultry”?) that he fails to stand out as a credible threat. The character of Mary Jane Waterbuffalo (you gotta love these puns, right?) is introduced at the end of the #15 and reappears immediately at the open of #16, establishing a bit of connectivity between installments. Characters like Daily Beagle publisher J. Jonah Jackal and his trio of interns—brand-new characters J. Jeremiah Jackal Jr., Upton Ashton Stray, and Bunsen Bunny—are probably the best-established point of continuity in the series, as they appear in every issue. But even then, the stories are told as standalone tales, with nary a reference between them about previous goings-on. 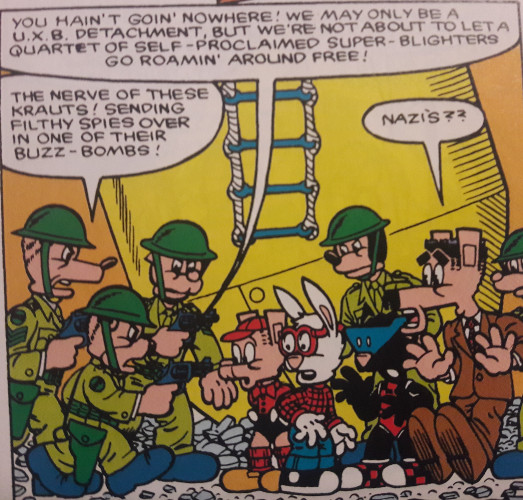 Normally, this wouldn’t be a huge deal. While I do believe that ongoing continuity would have made for a far more entertaining series, having each issue be its own adventure with a beginning, middle, and end isn’t distracting. The distraction, sadly, comes from the rather formulaic sequence of events that gets established early on in the series and carries through the whole thing—Jonah sends his interns and photographer Peter Porker on an errand, sometimes even joining them; the boys and Jonah encounter some sort of devious evildoer and get into trouble; Spider-Ham happens to appear and rescue them from the clutches of said villain. After four, five, or six issues of this same pattern, the stories become a little predictable. Yes, Skeates and Mellor add on a layer of unique storytelling concepts—time travel, giant monsters, mind control, etc.—to give each tale its own spin, but the core is typically the same. One running subplot does exist, as at least one Beagle intern continually comments on how Peter Porker vanishes whenever Spider-Ham appears; this, sadly, is never resolved. No astonishing deduction is made, no revelation made clear, and the series leaves readers with a hypothesis but no resolution to what could have been an interesting subplot.

Kudos to both Skeates and Mellor, however, for occasionally deviating from their common plots. For example, issue #6 is basically a retelling of the “Master Planner Saga” from Amazing Spider-Man, wherein Peter needs to reclaim a stolen isotope to help heal Aunt May from a potentially fatal illness. The Spider-Ham version of this story doesn't carry the same narrative weight--as it essentially copies the original tale, thus negating much of the tension--and I do wish the story had gone with an anthropomorphic version of an alternate Doctor Octopus (maybe an actual octopus with four human limbs?) instead of resorting to Ducktor Doom as its main baddie. But, gripes aside, the issue reads differently than others, and for that, it deserves some praise.

Under Mellor’s pen, the series diverges even further from the aforementioned formula, journeying deeper into the realm of the parodic. All of a sudden, Spider-Ham’s rescuing country music superstar Barbara Mandrill from the clutches of the Hobgobbler, going up against a mind-controlled Ozzy Ostrich, and saving a beauty pageant from the villainous machinations of the Kingpig. More than other writers, Mellor inserts elements of reality into this crazy, animal-inhabited world, and to great effect. He’s not really trying to make a point, per se, but his efforts can be hilarious; dumb as some of these puns are, to see how he lovingly imagines zany versions of Marvel characters (like Batty Brant) and pop culture icons (Mel Gibbon, Andy Warthog, Whoopie Goldfish, etc). alike shows some of the thought he put into his stories, which is more than I can say about some of the other writers.

Mellor also crafts the best issue in the entire series: issue #16 is a wonderful adventure that offers readers a menagerie of animal heroes and villains based on their Earth 616 counterparts. Doc Clamson, Nick Furry, Baron Zebro, Paste Pot Peep…seriously, this issue is a good time for any Marvel fan who really wanted to see the Mad Thinker as a skunk or Iron Man as a mouse (I mean, who doesn’t?). This is the direction I wish the entire series had gone; while some of the more “original” stories involving time travel and such are entertaining, I was hoping for a larger, Marvel-inspired universe of wacky characters and hilarious puns.

Most of this “larger universe,” courtesy of Mike and Steve Mellor, is relegated to back-up strips at the end of each issue. Introducing characters like Deerdevil, Croctor Strange, the Fantastic Fur, Thrr the Dog of Thunder, and the Silver Squirrel, these back-up strips range from bizarre, to boring, to downright hilarious. A running gag involving the Silver Squirrel beating up cosmic observer the Watchdog made me smile throughout the strip…but having Prince Kaymar the Sub-Merchandizer randomly encounter an unnamed Man-Thing parody as he tries to sell him goods from his underwater shop is a bit confusing and aimless. You get stories that use their animal-based puns to good effect AND insert clever gags…and then you get stories that just go with the puns and nowhere else. Regardless, the Mellors understand how to properly create parodies of favorite Marvel heroes and villains, using their limited page count to expand as best they can. Part of me wonders if Marvel was toying with the idea of other animal-based parody series; if anything, the Mellor strips show such an idea had at least fledgling promise.

Similar to the Marvel Tails one-shot, the humor of the series works best when it’s visual. While some of the writing is very clever—in one story, our heroes are unceremoniously dumped into a courtroom full of Australian pouched marsupials which Ducktor Doom calls a “kangaroo court”—the art does the real legwork in depicting the series’ funnier moments. A sign for “McDodo’s Burgers” makes the astonishing claim of over “72 Sold”; blocky text used for sound effects during a crowd of rioters builds in intensity (“Trample!” “More Trample!” and “Even More Trample!”); running visual gags, including Peter Porker getting knocked unconscious several times in one issue before he can become Spider-Ham, need no text balloons to be funny. As I said, it's "*Looney Tunes but with Marvel," and when they play it up well, our assembled writers and artists do well with the slapstick elements.

The series ends up being a mixed-bag. Anyone heading into Peter Porker, the Spectacular Spider-Man hoping for a full-fledged, interconnected universe filled to the brim with porcine, aquatic, feline, or avian versions of your favorite heroes and villains, or even those same versions of your favorite Spider-Man characters, may walk away a tad disappointed. But if you’re a fan looking for a couple of laughs, the occasional stroke of genius, and several forced puns, you may get a kick out of this. The series isn’t essential reading for you Spider-Man fans out there, especially with a unique premise unfortunately waylaid at times by poor writing, but for those of us who enjoy gobbling up as much Spider-Man and as many versions of the hero as we can get our hands on, Spider-Ham might just bring home the bacon.