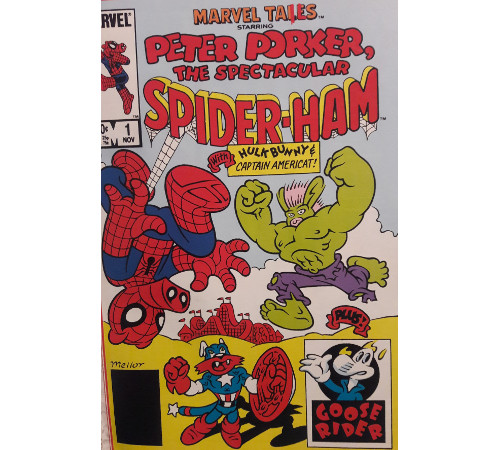 In November of 1983, a one-shot shook the comic book industries to its foundations. An idea emerged so convoluted, so bizarre and zany, that it took the pop culture world by storm and has since become a cornerstone issue in comic book modernity. When fans think of the greatest, most influential Spidey stories of all time, they inevitably point to this issue, ranking it alongside classics such as “The Death of Gwen Stacy,” "Nothing Can Stop the Juggernaut," and Amazing Fantasy #15. Initial buyers mourn not keeping it safely wrapped in plastic or stored where moth and rot could not touch it. Message boards and comments sections to this day still quibble over the exact impact of...wait.

I mislaid my notes. I have no idea what I’m talking about.

If only Marvel Tails #1 were that infamous. Despite its lack of setting message boards ablaze, this story does introduce a convoluted concept: Spider-Man as a pig--the Amazing (and Probably Pretty Edible) Spider-Ham! This one-shot will never rival any of Spidey’s most classic stories, but as harmless as it has ended up being, it’s still given us a character who remains, to this day, surprisingly popular in some circles, as his appearance in Spider-Man: Into the Spider-Verse and all related merchandise contests. Does John Mulaney’s amusing performance as our hammed hero rival the writing of Tom DeFalco? We shall see.

“If He Should Punch Me!”

Tom DeFalco has never stood out in my mind as one of my “favorite” Spider-Man writers. I don’t recall much of his stuff during my readthrough of my Amazing Spider-Man CD, and I think the first time I really took notice of his work was during my first reading of “The Clone Saga.” At the time, DeFalco worked alongside artist Sal Buscema on the pages of Spectacular Spider-Man, and while Buscema’s work is usually entertaining, when paired with drab coloring and poor finishes by Bill Sienkiewicz, his muted art combined with DeFalco’s consistently dull writing made for a tough read. Once I also noticed several of DeFalco’s “Clone Saga” tales were only one-half of complete stories, with the other chapters rendered by one of my Top Ten Spidey Writers of All Time J.M. DeMatteis and one of the my Top Ten Spidey Artists of All Time Mark Bagley over in Amazing Spider-Man, the experience became even more grating. DeFalco, already poor in my opinion, fell even farther by comparison.

A recent reading of his work of his 80s run on ASM during the “Alien Costume Saga” (which I will be reviewing in upcoming posts), wherein Spidey almost became permanently bonded to an alien symbiote he thought was a costume he found on Battleworld during the Marvel Superhero Secret Wars (which I will also be reviewing in an upcoming post), revealed that mid-80s DeFalco isn’t as terrible as mid-90s DeFalco. I don’t know what happened in the intervening years, but DeFalco’s voice stands out more strongly in his ASM issues. This is why I entered Marvel Tails #1 with a slightly smaller grain of salt than I would have if I hadn’t read that particular segment of DeFalco’s ASM run. 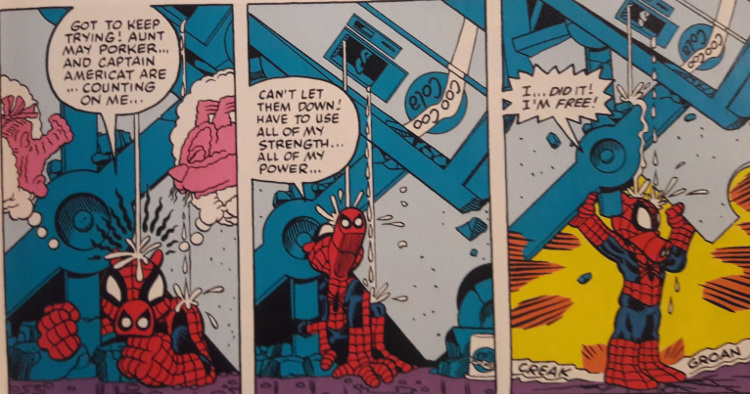 I don’t know who initially conceived of the idea “What if Spider-Man was a pig instead of a human?” or what even caused such a spark to occur. Fortunately, DeFalco takes this ridiculous concept and runs with it decently in the story. The issue feels like your typical Spider-Man adventure, but one that takes place in a world inhabited by anthropomorphic animals instead of people. This could easily be a world where your attention is continually diverted to thinking this is just a pig in a Spider-Man costume; instead, DeFalco inserts enough easter eggs and references to help you perceive this as an alternate universe within the massive Marvel multiverse—Steve Mouser is the superhero Captain Americat; when not crime-fighting, Spider-Man is Peter Porker, freelance photographer for the Daily Beagle under publisher J. Jonah Jackal; mild-mannered arcade technician Bruce Bunny is doused in “video rays” and becomes the Incredible Hulk-Bunny. In perhaps the story’s best moment, Spider-Ham has to strain against a mountain of arcade equipment that’s fallen atop him in a striking nod to a beloved Steve Ditko-illustrated sequence in Amazing Spider-Man #33. DeFalco realizes that he’s crafting something parodical and his oftentimes overblown dialogue fits more perfectly than it does in the more seriously-toned Spectacular Spider-Man. Simultaneously, he also seems to understand that, parody or not, this world belongs to the Marvel Universe at large and thus needs to resemble it in some fashion.

The story itself isn’t exactly wowing, following Peter Porker and Steve Mouser as they investigate attacks on an arcade and come into conflict with a mysterious Masked Marauder. Along the way, they also run into the Hulk-Bunny, whose appearance does smack a little of “How many Marvel heroes can we jam into this mag?” Amusingly, DeFalco’s treatment of the mystery villain is as goofy as one would expect—when several potential suspects suspiciously “vanish,” the reader is led to believe at least one of them has gone off to become the villainous Marauder, only to later learn these people were distracted and just wandered off on their own. Doses of humor like this, though exceedingly cheesy, make up for a rather lackluster story. The tale is intended to be more simplistic and contains very little in the way of character growth and nothing in regards to a relatable or self-applicable message or moral; DeFalco isn't crying "Save the Trees!" or opening our eyes to the horrors of terrorism or the evils of racism, for example. He knows this isn’t serious and plays along with the generally humorous nature of the story, to great effect.

Most of the humor, interestingly, comes from Mark Armstrong’s art. Amusing, tiny details are sewn throughout the issue and, at moments, work even better than DeFalco’s verbal attempts at comedy. A food vendor seen in the background of a fight between Spider-Ham, Captain Americat, and several thugs peddles “Fight Snax” to the public; amidst a crowd of frothing, sign-carrying dissenters protesting the arcade is a weary otter with his own “No More Politics Please” sign; in perhaps my favorite gag, Spidey and Americat change from their superhero duds to their civvies behind a clothing divider situated on a rooftop, making one wonder how the heck they got the divider up there in the first place without the characters ever drawing attention to its presence. These gags, scattered in the background, enhance the story and keep you focused on, not just the narrative unfolding before you, but on the details within. The best part about these humorous moments is how natural they feel within the story. The jokes just exist, without anyone pointing out how amusing they are. It's up to you, the reader, to find and enjoy these pieces of entertainment on your own, and that silent, voluntary agreement you make with the comic only enhances the experience.

A backup strip written and illustrated by Steve Mellor focuses on a flame-headed, motorcycle-riding gander called, you guessed it, “Goose Rider.” This strip isn’t particularly funny at all, focusing instead on a series of small gimmicks that neither work on their own nor stand together as a meaningful running gag. The strip can’t even be called a “story,” without any discernible plot or characterization. I don't know much about Ghost Rider, the character this goofy goose is based on, but I do know that any elements associated with the character are not inserted into this story, for either dramatic or comedic effect. I felt Mellor thought up the punny name for the character and stopped at "Goose Rider" without ever taking a real chance to turn the name gag into something more entertaining. 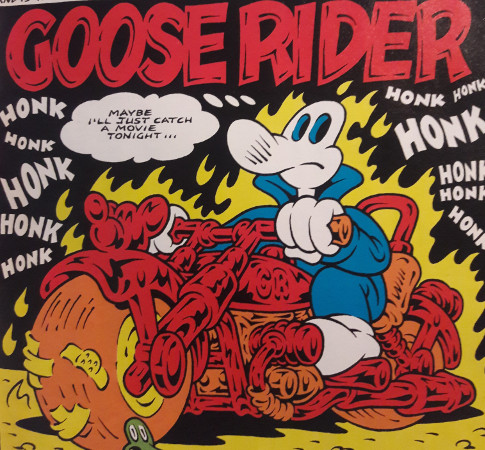 “Spider-Man crossed with Loony Tunes” seems like a genuinely ridiculous and funny concept, and DeFalco and Armstrong do their best to insert as much humor as they can into the book. Occasionally, some of the verbal jokes fall flat, but Armstrong's expert visuals make up for these wimpier gags. Something they did must have worked, since Spider-Ham received his own ongoing series about a year-and-a-half later and, even today, the character still has some decent staying power. Marvel Tails #1 isn’t the best farcical homage to the Web-Head that I’ve come across, but it has several what I would call “good moments” even if the overall execution isn’t perfect. You could do worse if you’re on the lookout for alternate versions of Spidey, and if you enjoyed the character in the Spider-Verse movie, you might be entertained by exploring the character's comic book roots.