Spider-view: “A Child Shall Lead Them” (Alien Costume Saga, Part 20) 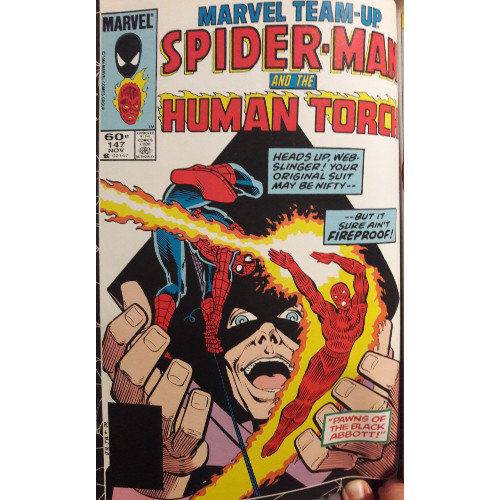 Most of the Marvel Team-Up issues we’ve examined so far have been standalone adventures, self-contained tales with a start, middle, and ending all in the span of 22 pages. We’ve seen one example of a slightly-longer story, courtesy of David Michelinie, but other than that two-parter, everything has been solidly single issue stories. Cary Burkett alters that trend with this two-issue tale.

Burkett (along with penciler Greg LaRoque) introduced a new villain, the Black Abbott, in MTU #146, which saw the sinister villain’s plans foiled by Spidey and Nomad. Slinking off to lick his wounds, Black Abbott may not have cried foul or sworn revenge, as defeated adversaries are wont to do, but his menace hangs over the title still. Abbott returns, with a new scheme, for this story, and it’s up to Tom Holland, Chris Evans, and Chris Hemsworth--I mean, Spidey, the Human Torch, and Thor--to foil his dastardly plot.

Bet you thought I was gonna say “Captain America” for a second there, didn’t you?

“A Child Shall Lead Them” 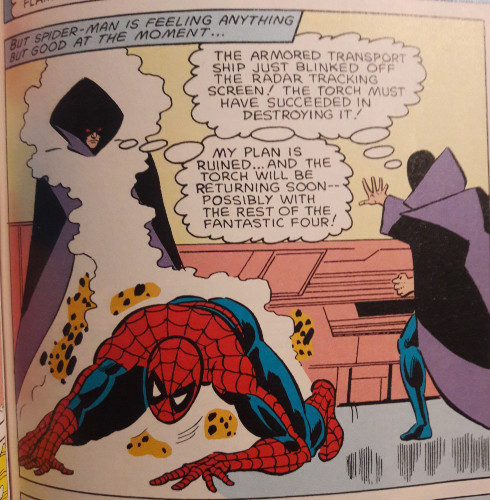 I’ve read so few issues of MTU by this point that I cannot conclusively say whether multi-chapter stories were common during the series’ run. I do recall one particular story early in the series where Spidey spent three issues working alongside Iron Man, the Human Torch, and the Inhumans against Kang the Conquerer, and I remember walking away from the story highly entertained by both the plot and the “interchangeable” aspect of the story. Spidey’s presence was maintained, but subsequent heroes were switched out, and I don’t believe I felt like Iron Man, the Torch, or the Inhumans were short-changed by their “one and done” appearances.

The same feeling resonates in these two issues, as Spidey teams up with the Torch first and then everyone’s favorite, blond-headed Norse God of Thunder. I’ll actually attribute this pleasant switcheroo of heroes to another story I recently read and reviewed, the Marvel Superheroes Secret Wars limited series by Jim Shooter. Burkett doesn’t reference the event much--which Spidey, the Torch, and Thor were all part of--but I couldn’t help but wonder about the crossover series' influence on this two-parter. Spidey and the Torch have always had a friendly rivalry in the comics, and their jokingly abrasive personalities come to the fore in MTU #147. But the way Thor treats Spidey continually reminded me of the galactic adventure they recently shared, as if by seeing them together in the limited series made their communing in this tale feel more natural. 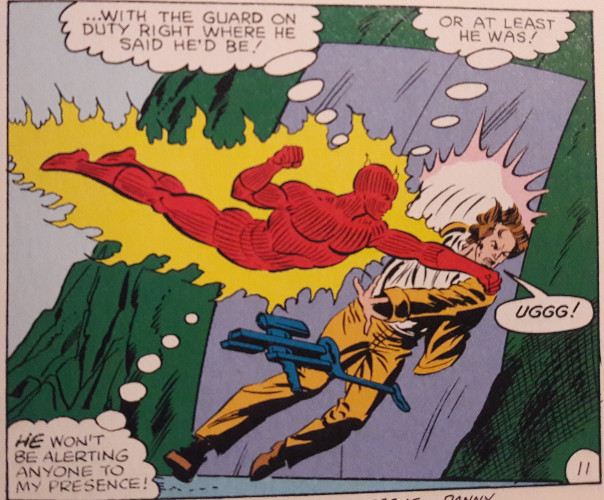 Burkett actually tethers a few pieces of Spidey lore into issue #147, both a very recent bit of history and a more ancient narrative. After a small misadventure with the Torch, Spidey reflects on their most recent interaction, in ASM #258, where Johnny aided Reed Richards in removing the symbiote alien from Spidey. The summary takes up about a page and bogs the story down slightly, but for anyone unaware of Spidey losing his new costume and why, I suppose the page serves as a summary to bring them up to speed. Nicely, Burkett does play with the slightly antagonistic friendship the two share, allowing the summary to at least offer a tiny bit of insight into their relationship.

More fluidly, Burkett harkens back to ASM #3, a story published 21 years prior to this one, where Spidey battled Doctor Octopus for the first time. Spidey takes a moment to reflect on a bit of encouragement he subtly received from the Torch, who had spoken at Peter’s high school and unknowingly inspired Peter to tackle Doc Ock one more time following a troubling defeat at the villainous doctor's metal tentacles. This flashback is significantly smaller and incorporates some fantastic work by Greg LaRoque, aping Steve Ditko’s distinctive style. The brief image of Ditko-esque Peter and Johnny, though relegated to the background of a single panel, made me smile in remembrance more than Burkett’s verbal summary did. ASM #3, though not one of my personal favorites, is still a classic issue with a lot of history behind it, so I can’t help but appreciate Burkett’s attention to continuity. 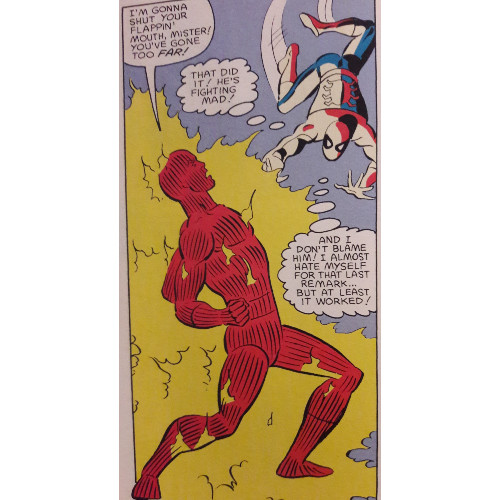 The team-up between Spidey and Thor carries less emotional weight, simply because the two don’t have as extended a history as Spidey and the Torch do. Unlike pairings with other heroes such as the Torch, Daredevil, or even Wolverine, “Spidey and Thor” isn’t a duo that automatically springs to mind when I think of famous team-ups. I can list perhaps two other teamings between the Web-Head and Thunder God that I know I’ve read; the first was a rewriting of a MTU #7 for younger audiences, and the other was a two-part tale from the 90s that I remember being kind of dull, despite artwork from John Romita Jr. Point is, Spidey and Thor don’t usually mix well, and I’d say a lot of this is because the two don’t have a lot in common. “Spidey and the Human Torch” works well because the two are both young, hotheaded, loudmouthed, and relatable to readers; “Spidey and Daredevil” is an often solid pairing because both are men marred by personal tragedy who try to keep the streets of their beloved city clean of crime. But Spidey and Thor? One is a golden-haired deity who, when he isn’t lording about Asgard drinking mead and wooing women, fights alongside the Avengers in galaxy-spanning adventures. The other is a guy who got bit by a spider and spends his days worrying about whether his aunt’s going to die of fright while punching the Shocker in the face.

Burkett, unfortunately, doesn’t capitalize on the vast differences the pair have, or even some potential interesting similarities they may share, sacrificing characterization for plot. And that’s not to say the plot is underwhelming--seeing the Black Abbot’s own story continue, with his backstory revealed and his plans given fuller attention, made for an entertaining “trilogy” of issues for the character, even if he has been used very sparingly since his initial appearance here. The villain ends up being a bit generic in terms of power set and supervillain scheme and, unlike in MTU #146, Burkett doesn’t utilize many of the interesting religious undertones he originally gave Black Abbott. Yet, the concept for a new and enigmatic character made for interesting reading, even if some of the finer points of the villain’s character were left to the wayside. 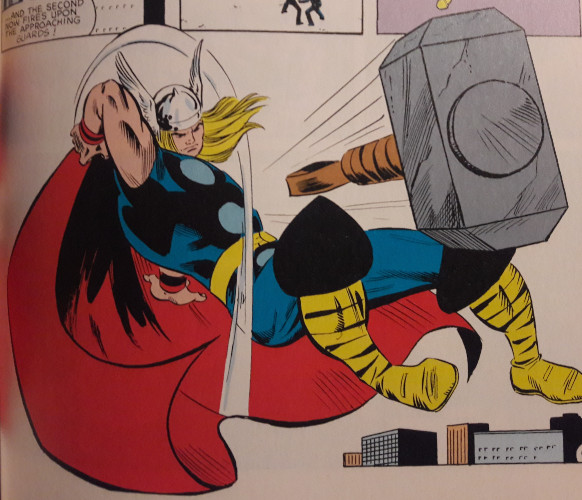 I also quite enjoyed seeing Thor become embroiled in the Black Abbott’s scheme and how Burkett was able to wrap up this trilogy of issues by using the Thunder God. Early on, Thor does battle with some of the Abbott’s minions, hurling Mjolnir and bringing down some of the villain’s aircraft in an impressive display of power; later on, he becomes a victim of the Abbott’s mental powers, needing Spidey to come and rescue him before hurling down some sweet lightning-flavored vengeance on his captors. Burkett juggles the action between all three of his heroes well, meaning Spidey, the Torch, and Thor all contribute to the plot. Yet, in terms of decent character moments, those only seem to exist between Spidey and the Torch, hence my slight criticism above.

Burkett also brings back Tony, the young boy he introduced in MTU #146. Readers may remember him as the child who wanted to join the Butcher Dogs gang and eventually changed his mind when Nomad rescued him from a burning building. Tony's role is minor yet important. Sporting a costume similar to Nomad's, Tony is certainly inspired by his interaction with the crusader. His efforts may seem misplaced, as a scene showing him being run off by bigger boys indicates, but Tony still manages to act heroically and even lends Spidey and Thor a hand. His inclusion doesn't seem as important as it was in MTU #146--that issue allowed Burkett to use the boy as a symbol of choosing the proper role models to follow and be inspired by. Sure, he helps Spidey and Thor save the day in this arc, but Tony's role feels a tad forced. I appreciated Burkett bringing him back as a connection from his prior story, but Tony's specific actions feel a little wedged into the story, a bit "too good to be true" for our Friendly Neighborhood Web-Spinner and his blond-headed buddy. 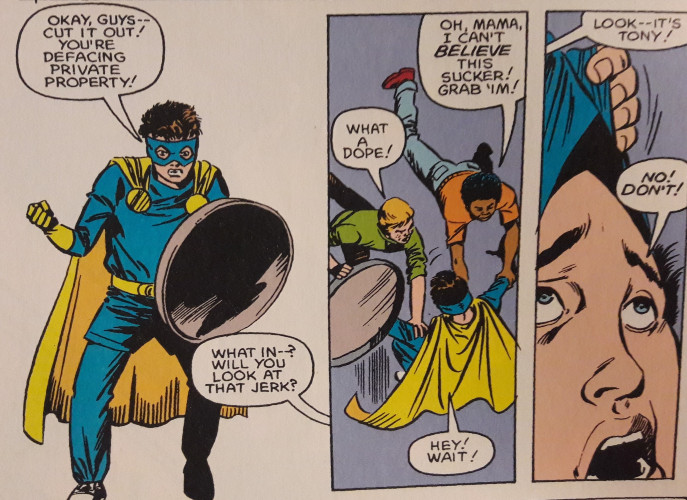 Being the “third” Spidey title, Marvel Team-Up isn’t the series that will carry much lasting impact. Many of the stories have been self-contained, referenced sporadically in the other titles (Amazing and Spectacular), which isn’t necessarily a complaint. Seeing how troublesome maintaining continuity has been for DeFalco and Milgrom, I think it’s good that Burkett and LaRoque have been given the opportunity to craft their own corner of the Spider-verse, largely separate from the circumstances circulating around the other two major titles. This means that our writer and artist duo get to make snappy little stories like this two-parter and can sprinkle in new foes and plotlines that don’t need to rely on whether or not Black Cat and Spidey are on friendly terms or whether the Hobgoblin is alive or buried at the bottom of the Hudson. Burkett’s highly capable of crafting a fine team-up between Spidey and the Torch, and even if the Spidey/Thor issue feels less refined, that’s more so to do with the lack of shared history between the two. At the end of the day, I’ll take what entertainment I can get from this series, and if it means a solid Human Torch/Spidey fest over a decent Thor/Spidey adventure, I don’t mind much at all.